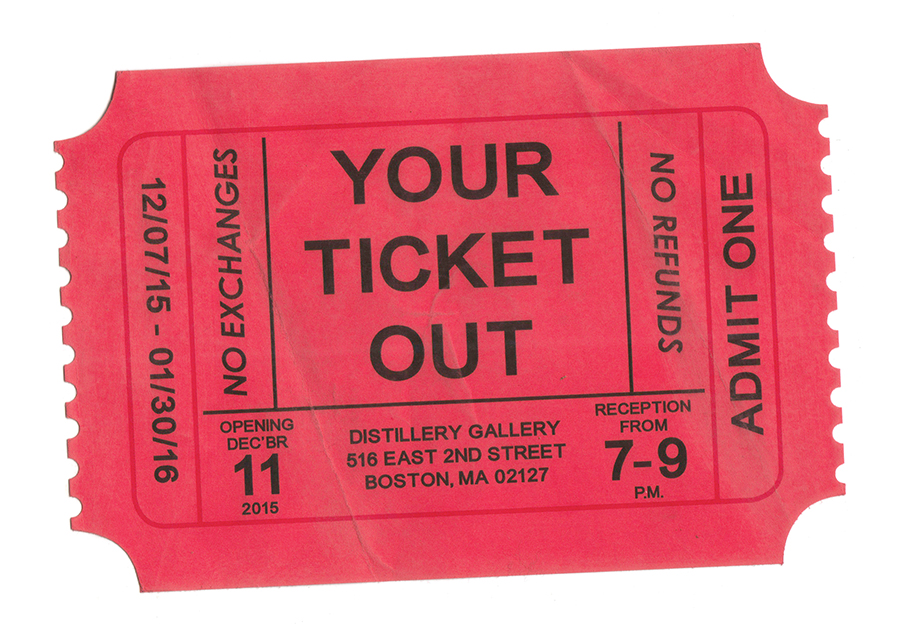 As you sit in front of you computer screen at work, or behind the steering wheel of your car in traffic, or wrestle your way to the bar of some new hip microbrewery in your neighborhood, it’s hard not to think, “What am I doing here?” The rent, bills, student loans, and car payments get paid each month, and there’s always some food in the fridge, but there has to be more…there has to be a ticket out of the monotony of everyday life.

Boston-based artist Tj Kelley III has organized and curated a group show entitled “Your Ticket Out” that begs to question what individuals equate to a “ticket out”. While we all fall victim to skirting leaps of faith in exchange for safer, more practical daily routines and lifestyles, “Your Ticket Out” stands to paint a portrait of personal fulfillment, where the comforts and enjoyable activities inside the norm cease to be a distraction and you’re uninhibited to endeavor.

“Your Ticket Out” opens on Friday, December 11th at Distillery Gallery in Boston with a rad group of artists from around the country. We took a moment with Tj Kelley to talk about how the show came to fruition, the artists involved, and where he would go, if he had a ticket out.

How did you come up with the theme for this show, “Your Ticket Out”? Has this show/ idea been a long time coming?

I was reading this interview on StreetCanoe.com with Chad Bowers, who is the mastermind behind Quasi Skateboards (formerly Mother Collective). In the interview, Bowers is asked how he would describe skateboarding to somebody who had never seen it before, to which he masterfully replies: “Your ticket out.” He elaborates a bit further, but it just clicked so powerfully with me. It was so heavy, it was such a perfect way to answer that question.

I’ve been slowly working on this since January when I was invited to do something in the Distillery Gallery. The show went through a few potential themes and ideas before I settled on “Your Ticket Out”. It must have been around April when I started writing for the show, and since then it’s been a very meandering and organic process putting this all together. I wanted to create a little bit of an enigma for the viewer. My hope is that people will look at this work through the lens of their own moments where the light bulb turned on and reflect on that, just as the artists did when creating their work for the show. The idea is a bit difficult to pin down so that the viewers could interact with the work in the context of their own lives.

In the press release you say, “You hid it behind a safer career path, a savings account built for the inevitable, suburban practicality, Netflix and chill, a keen interest in fine beers…” Do you think you’ve taken this “suburban” or “safe” route? Is it hard not to in some way take this route? You think this dilemma between taking the safe life route and actually going after what you want without regard for savings accounts and all that other bullshit is something that a lot of creatives contemplate and deal with?

It’s super hard! I think personally I walk the line quite a bit. I definitely watched a few episodes of Bob’s Burgers tonight, but I also spent time painting in my studio. I pursue a lot of short-term goals that take up my time and my money. In terms of work, I have a full time job that I love and a packet from TIAA-CREF on my desk that I haven’t opened yet. There are scribbles and sketches and words about ideas and paintings I hope to make in my little red notebook that I’m writing in everyday. I pay my rent and my loans on time and I’m caught up on my utilities. All of that is very practical and safe, but I still have this pursuit for more personal fulfillment that does not culminate in the purchase of a weekend home on Plum Island or a Tinder profile with a description that starts with the words “Whiskey enthusiast”.

It’s really difficult for artists to make those leaps of faith, especially when there is no safety net if it doesn’t work out. Often times those leaps of faith are very rewarding and beneficial mentally but not financially, and you have to hustle because rent is very real. I think that the “safe” or “practical” route has much more to do with giving up the pursuit of lofty personal goals because of the fear that it might be a waste of time.

When you’ve got your ticket out, you don’t burn your Roku or switch from a pinot noir to Night Train or quit your job at that cool startup and wait for your eviction notice to be posted. The portrait that I tried to paint with that statement is that there are many comforts and enjoyable activities inside the norm that can be very distracting.  It’s just about personal fulfillment.

If you had a ticket out, where would you go?

The dream! I would do two things, and they would both be free of any calendar, day job, or deadline. It would be great to spend a whole bunch of time in the studio just getting weird and exploring the ideas and small sketches that have been sitting in my notebook for far too long. When I got sick of that though, I would just get in the van. It would just be traveling, camping, riding skateboards, building fires, swimming, and sharing beers and stories with friends that I don’t get to see enough. I would make small drawings and write some words and engage with the records and books that I’ve bought and borrowed that I haven’t been able to listen to or read yet. I like being on the road, it seems that every day you’re out there you get one bizarre story, good or bad, that you can keep in your pocket and share with people at poignant moments.

Having a beer at the bar and laughing with friends would be rad too, but I do that enough when I’m hiding from my calendar!

How did you curate the artists involved? What direction did you give them when you asked them to be part of the show?

I actually didn’t curate the artists that much at all, aside from selecting them and placing the show. There was no visual theme to follow and there was no certain thing in anybody’s work that I asked them to adhere to. I gave them this piece of writing that I had done, and just asked them to make work. Nobody had to make work about their own ticket out at all. Some did, some sort of did, some did not at all, and maybe that was their ticket out for this show. I just wanted it to be a show about personal freedom. The artists in this show make amazing work that I love to look at, and by having this very broad idea of a show I think that viewing them all together will make for a very interesting experience for everybody involved. That’s all I really had to do.

Is this the first show you’ve curated? What do you like about the curation process?

This is the first show that I’ve curated. I’ve been a juror a couple of times, but I’ve never had total control of the whole process before. There are two parts that I enjoyed immensely, the first of them being all of the writing that I did for the show. I really wanted to sell the idea to myself. Being able to spend so much time critiquing my own writing and idea building allowed for some much needed self reflection.

The second part was being able to invite these people to participate in this. It was lovely working with these artists, and all of them are totally crushing it in every way. Everyone was excited and happy to be a part of it, and that’s been the best.