The Interrogation of Heavy Slime

Artwork riddled with political insights and innuendos, Eric Kenney, also known as Heavy Slime, has his own way of seeing things in this tumultuous world.  After I came across a piece by Eric that said, “FUCK YOUR BULLSHIT WALL,” I instantly became a Heavy Slime enthusiast. With Kenney pieces littered throughout my room, it’s easy to say that I am a big admirer.

Over a thirty-minute phone call from Los Angeles to Philly, I questioned Eric about everything from the senile man we’ve been forced to call our president over the last two years to football kickers getting paid on Venmo by raucous opposing fans.  Shootin’ the shit as a fanboy may have altered our conversation, but I am more than ecstatic to share my time with the man known as Heavy Slime. 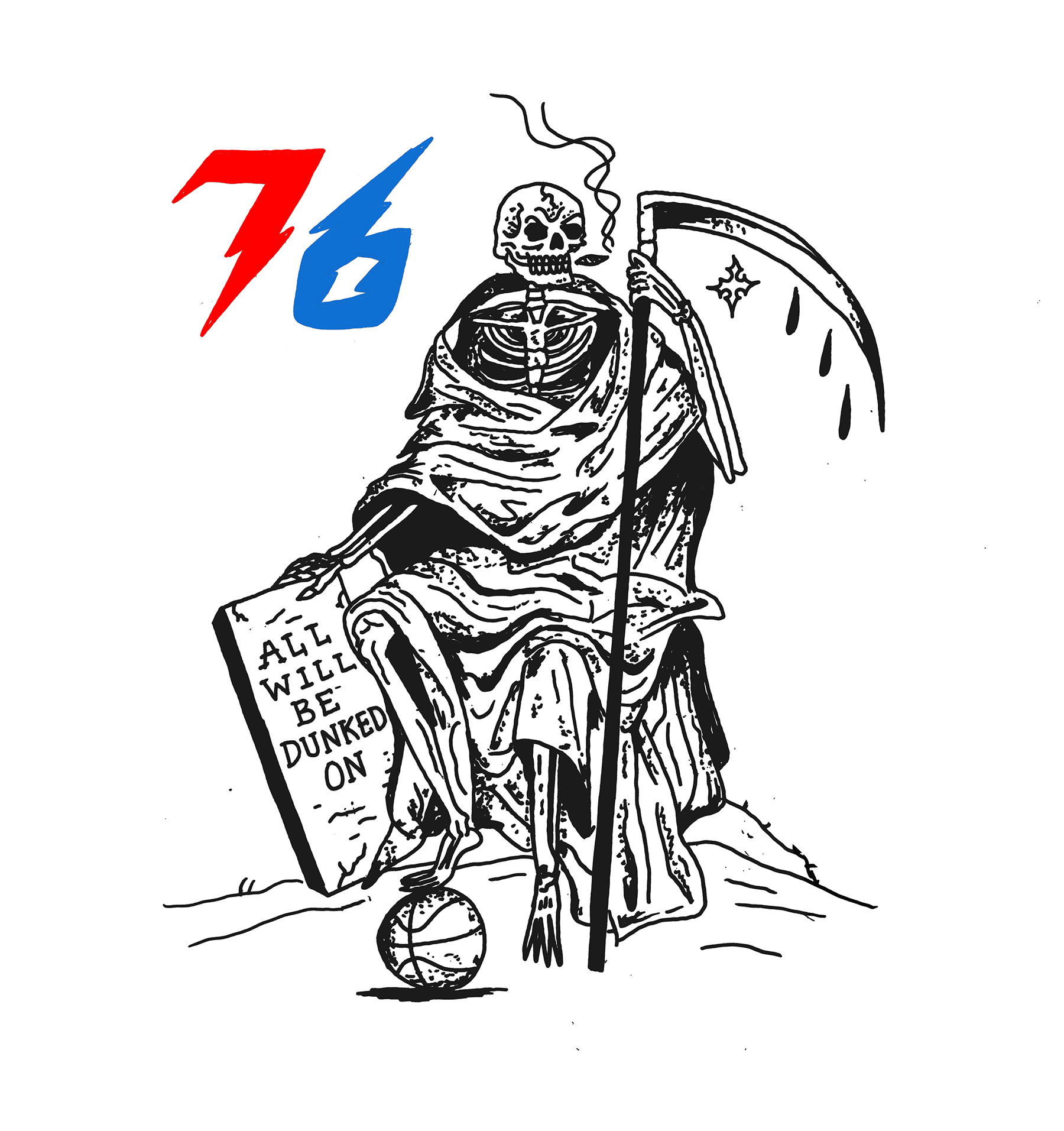 I noticed a couple of months ago that there were some Amazon fakers and internet people copying your work, throwing it on shirts, and selling them.

Yeah, I think they’re just these websites that have these DTG printers. Basically, they can just print out any design digitally onto a shirt, on demand. I think these companies scan the internet for any image, and they’ll just photoshop the design on a shirt, and if they get an order for it they’ll print it. If they don’t they don’t give a shit. They always make themselves really hard to get into contact with, no email, no phone number. It’s so annoying. I don’t sweat it too much because there is so much crap on these sites, I doubt anyone is even buying them.

Some of my friends and I were sitting around laughing about that time that Tom Brady and his son kissed for an extended period of time. What’s your take on that?

It’s fucking weird. Everyone has seen that video of him kissing his son. There’s nothing wrong with kissing your kid, but he like calls him back in for more. I don’t know, he’s a freak man. And while he’s getting a massage too. And you know they’re filming you, he’s a freak. 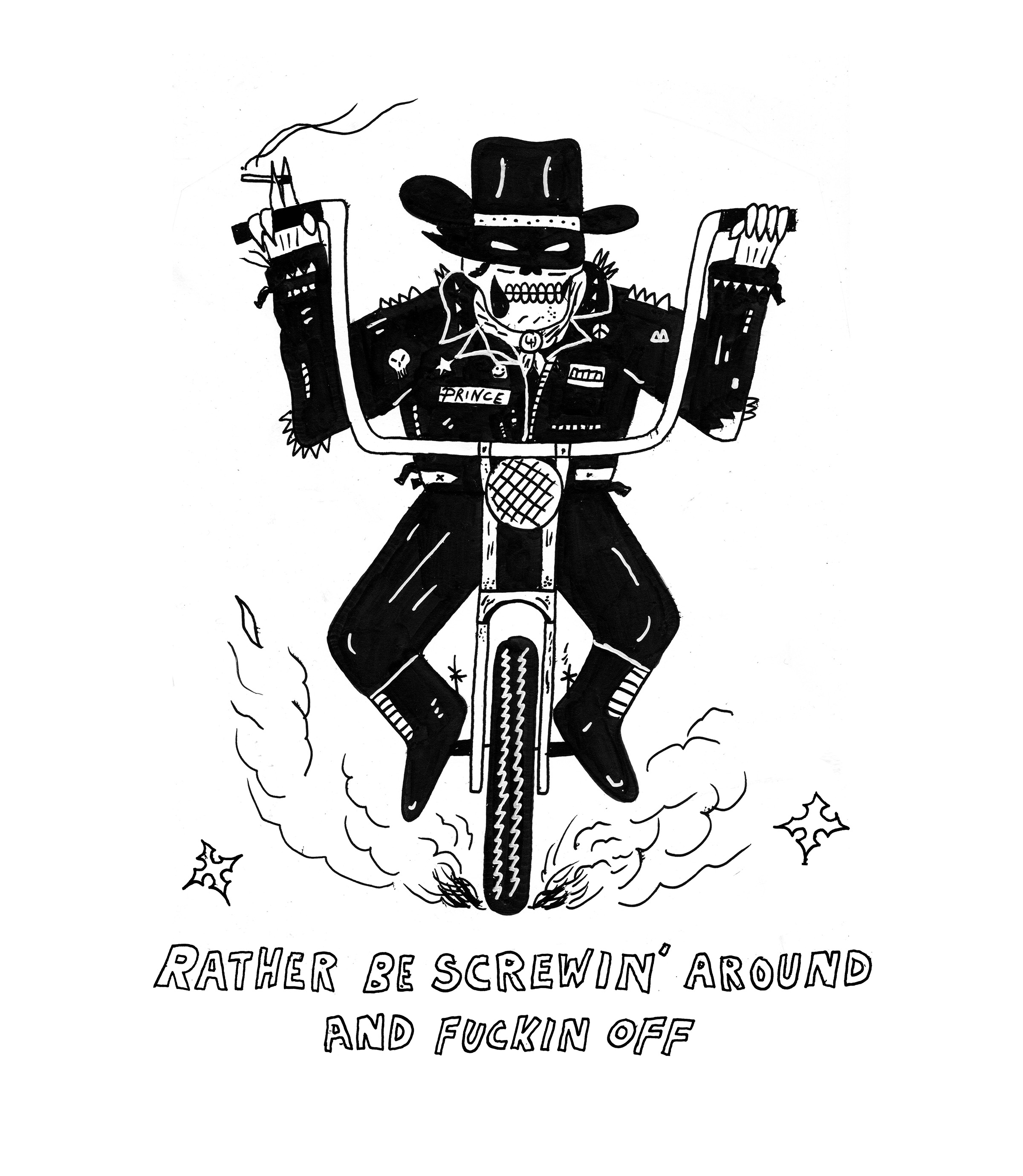 If Trump smoked, what do you think he would smoke? Would he be a vape guy or would he smoke cigarettes?

Do you have any new projects going on right now? What are you currently working on?

It‘s usually just a constant cycle of putting out new shirts, drawing more, trying to figure out new ideas. I released a new shirt today. I’m working on a couple of bigger canvas prints, sort of like tapestries. Draw, draw, draw, and when something feels like it would look good on something, I make it happen. 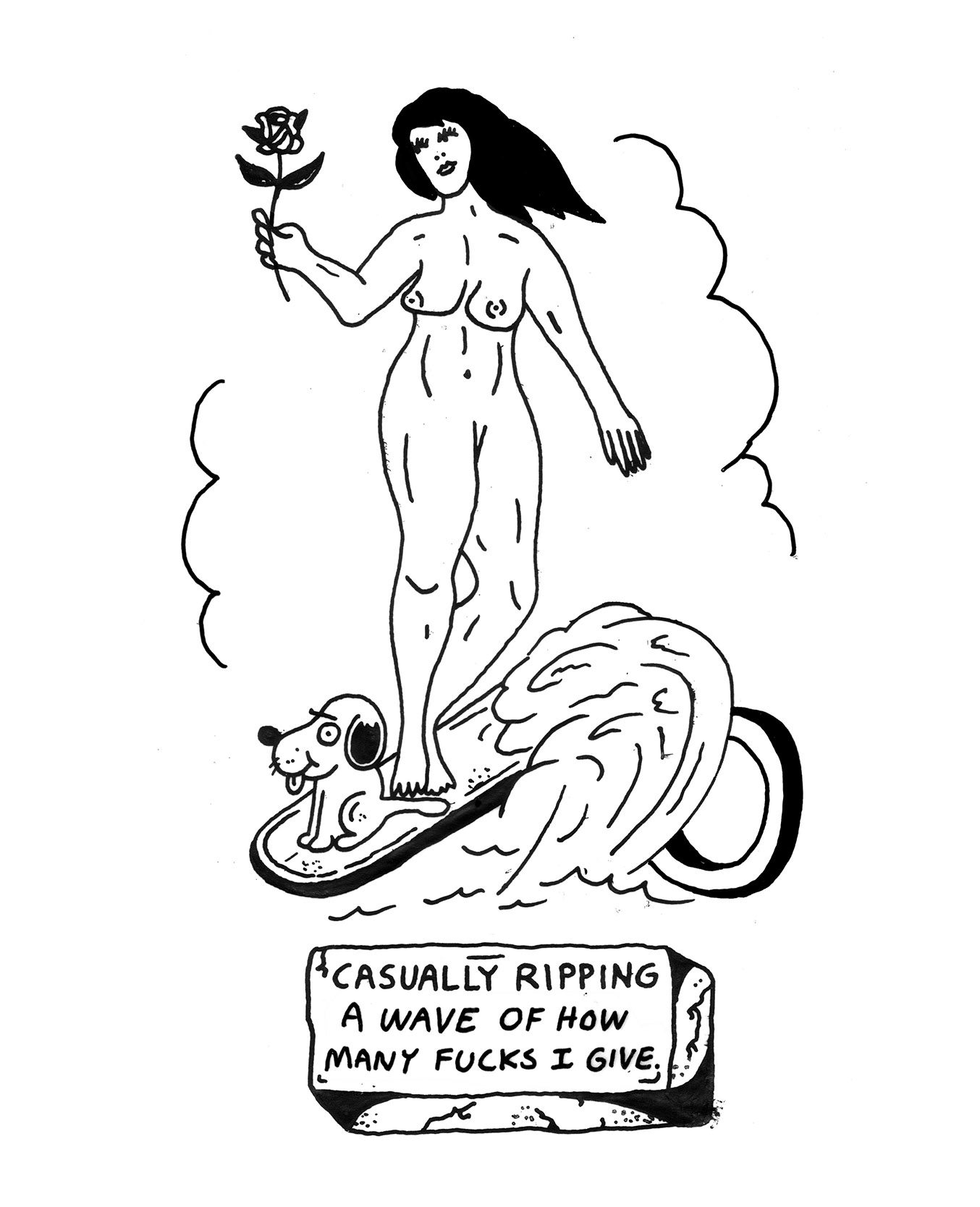 Do you have a favorite artist?

I really like Cleon Peterson. I have a bunch of his stuff in my house. It’s hard, with Instagram, you see so much work, you just become numb to it.

It’s kind of sad. You’re sitting there flipping through Instagram and you almost don’t even register what you’re looking at.

I don’t actually follow that many artists. I’m always trying to look at other stuff so I’m not subconsciously ripping someone off. Sometimes you just don’t want to think about other people’s art or any of that. You just want to get inspiration from different things. 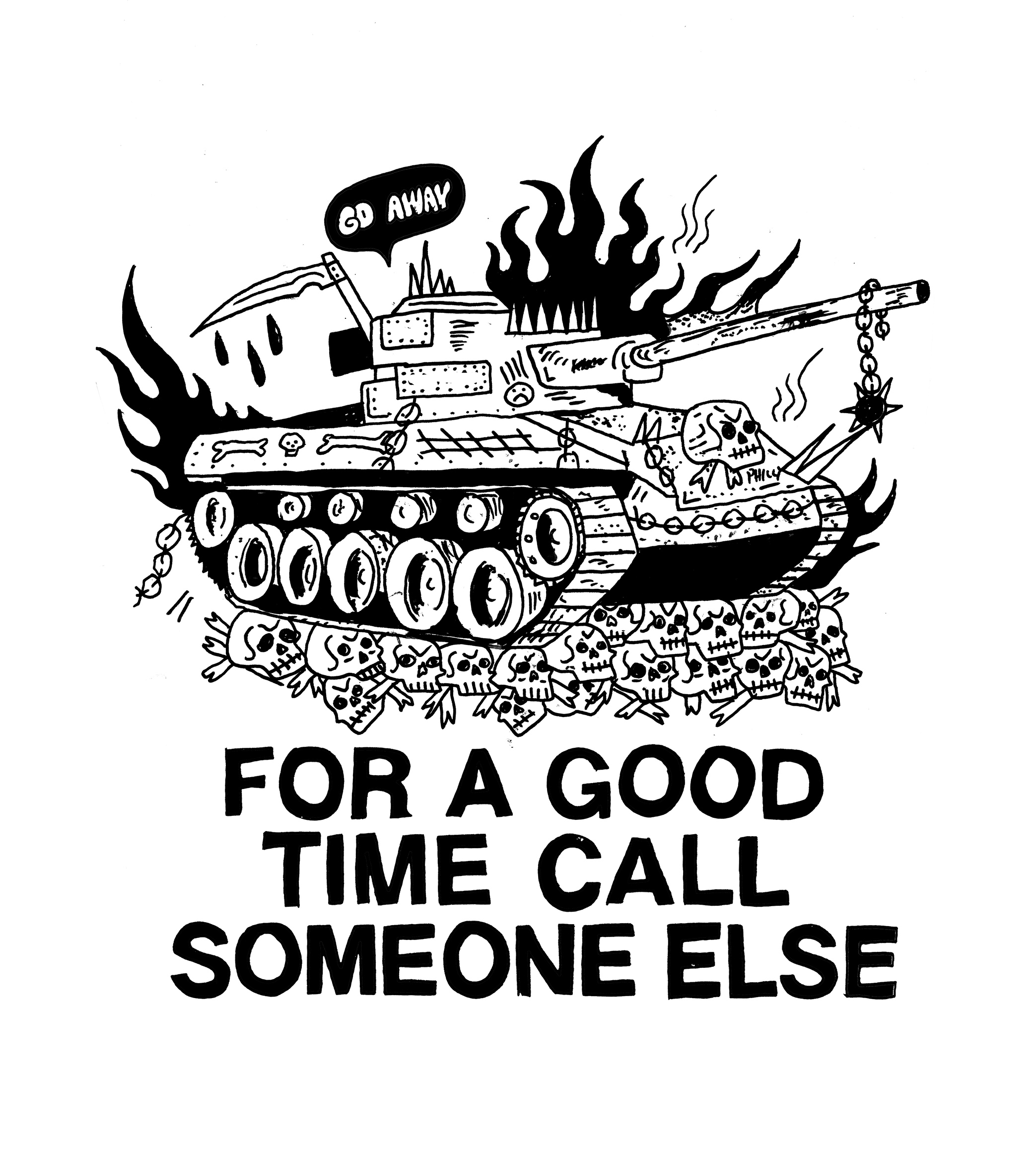 Let’s talk a little bit about sports now. Anyone that follows you and your work knows you’re an Eagles fan. My cousin Alex’s fiancé Lee is from Pennsylvania. So I found myself watching the Eagles game every weekend with them. And honestly, I kind of became an Eagles fan just from watching how into it he was, standing up throughout most of the game, having to close the front door during a play, haha. One of the most unbelievable moments was when the Eagles were playing the Bears and the Bears kicker missed that fateful field goal kick. What was your reaction to that play?

I was definitely jumping around and screaming, “Fuck that guy!” Haha, that was crazy. No one expected it. I felt bad for him for a moment, but then it came out that the kick was tipped by the defense, so he shouldn’t feel that bad about it.

Right after he missed that kick, they played a montage of instances where he’s missed other field goals in his career. It was brutal haha. But they had it all queued up.

Yeah, I don’t think any Bears fans were happy with his whole season. He missed a bunch of field goals throughout the season.

I heard Eagles fans were Venmo-ing him money.

I looked that up too. He was on Venmo, and I was like, “Damn maybe I should send him a buck.”

That’s fucked haha. Let’s talk about the next game when, unfortunately, Ashton Jefferies missed that catch,  it went right through his hands. Makes you think it just wasn’t the Eagles’ season. Not to mention all the injuries they had this year too. Carson Wentz got hurt and Nick Foles took over at the tail end of the season. Carson Wentz or Nick Foles?

Oh, I don’t know. I definitely always kinda liked Foles. I just like the way he plays; he plays more like a classic quarterback. But honestly, I wasn’t even mad at Jefferies when he missed that catch. He played good all season. That second half, they basically shut Foles down pretty hard. We definitely weren’t playing the way we wanted to. Who knows if we would have even scored if he caught it anyway. 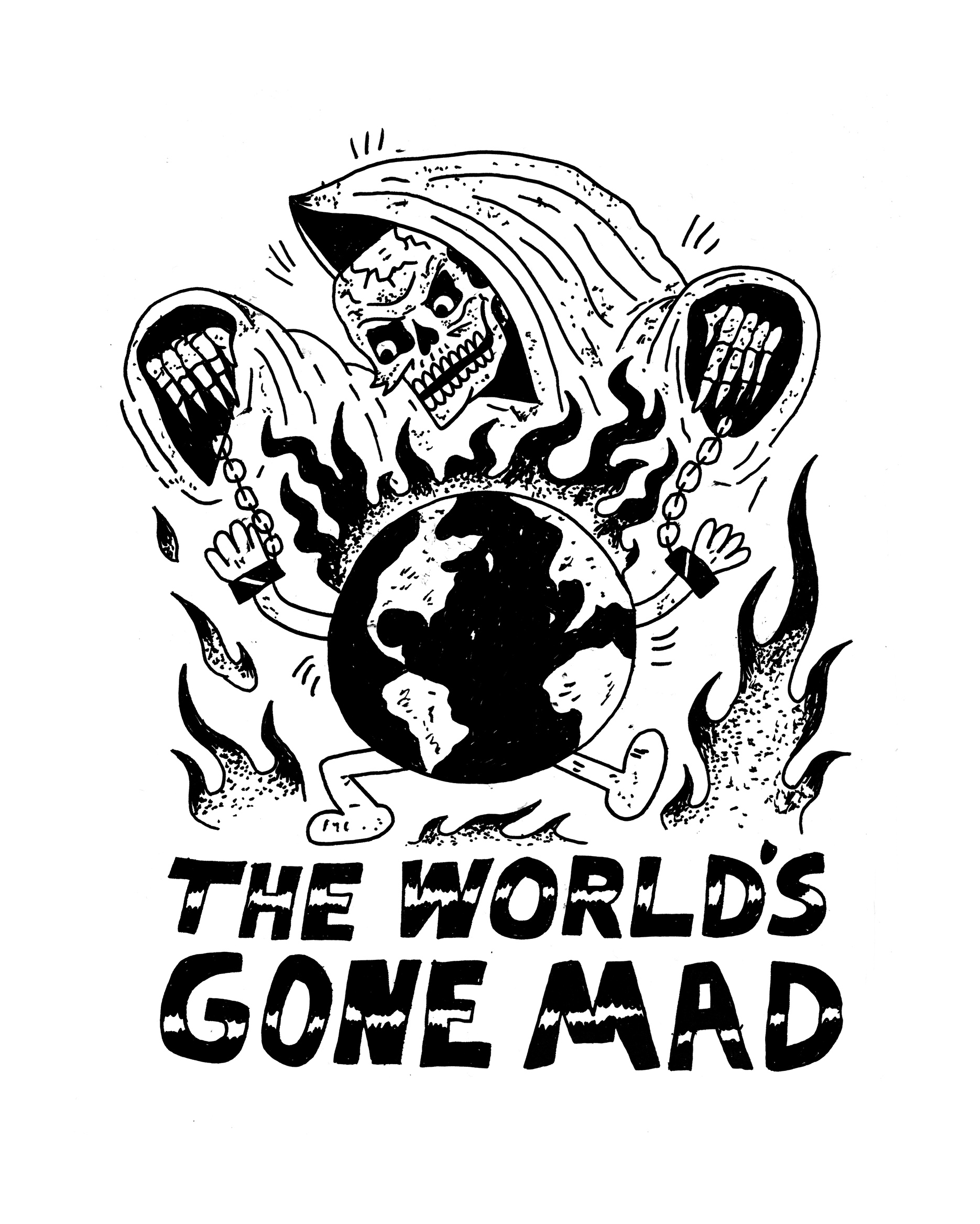 I got a little bit of politics for you too. You’re on the East Coast and I’m sure you realize this, but the East Coast just has more of a political vibe than the West Coast.

Yeah, people out there are all kind of on the same page or just keep their mouths shut.

We experience the battle over immigration pretty closely here in California. The idea of building the wall has a big impact on a lot of families and groups of people that make up the Los Angeles community. One of your shirts, which I have and that I love, is the “Bullshit Wall” shit. The Kool-Aid guy busting through the wall. It’s great. What’s your stance on the wall? Trump’s shutting the government down over it.

It’s crazy because when I first made that when he got elected. It was just a reaction to a ridiculous idea. Then after a year or so, I started printing them because of the whole wall idea kind of went away. Then all of a sudden he comes back with this bullshit that he’s been pulling with the government shutdown and it’s just crazy man. It’s such a silly idea, that’s going to be so expensive. I saw today that he’s releasing a new slogan and stuff about the wall. Like what are you doing? 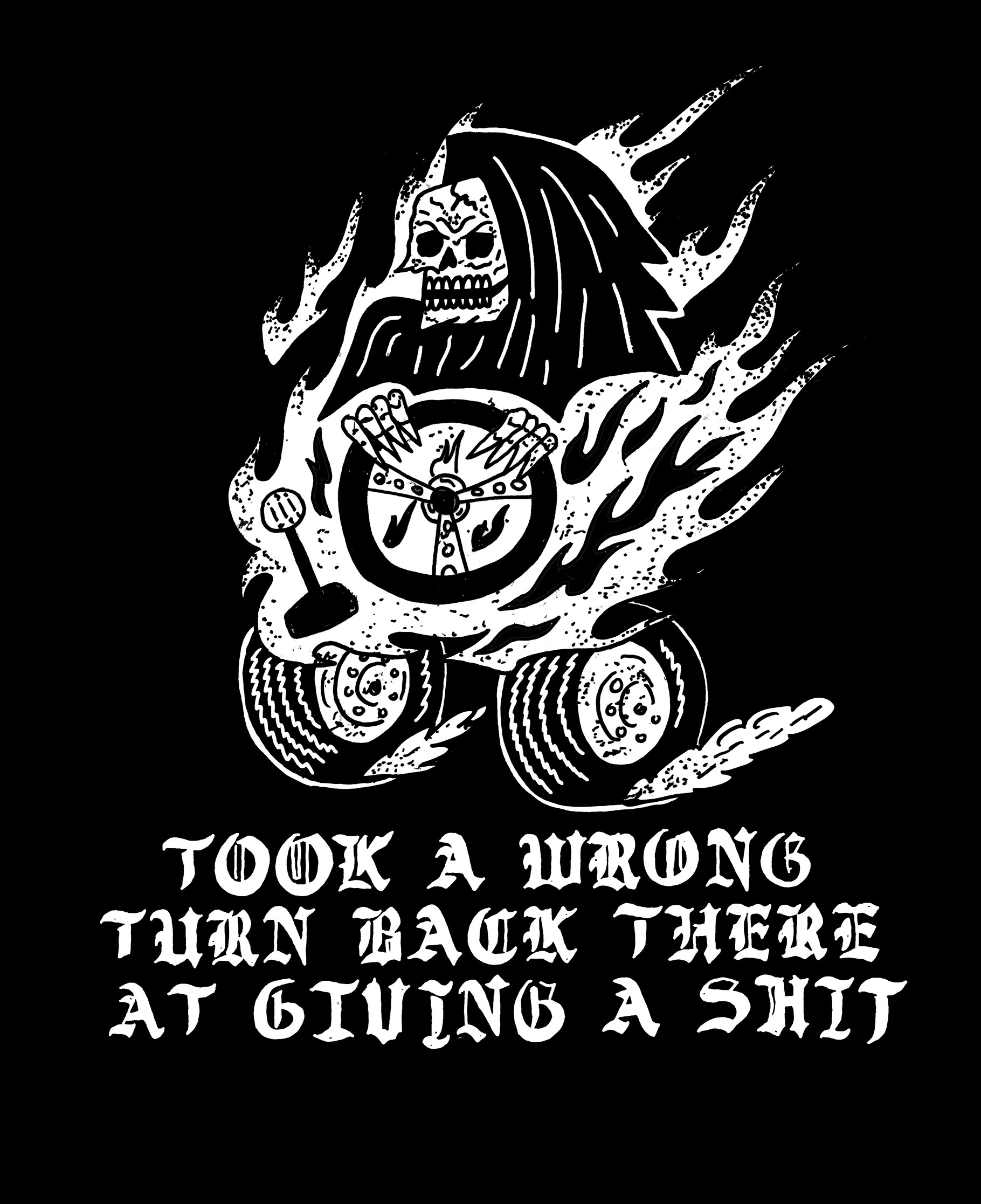 What music are you listening to these days? Are you more into musicians like Kurt Vile or into more funky music?

Yeah, I’m into Kurt Vile. I definitely hit the podcasts pretty hard when I’m working. I haven’t been listening to as much music as I used to because I work on my own a lot. I like to have the sound of people talking or actually learning something while I work. I get stuck in these wormholes of music and listening to the same stuff over and over again. With podcasts, I can keep up with things and try and get smarter.

Are there any annoying social media sayings like #basicbitch or “but first coffee” that you just can’t stand when people say it?

I think just seeing those typical “be happy” quotes. That positive shit where it’s like, “Hey, laugh today!” I feel like people eat it up, but to me it’s offensive. It’s like, “Be happy,” and I’m like, “No, fuck you. You don’t know what my day was about. Things aren’t that simple.” There’s definitely too much of that going around. 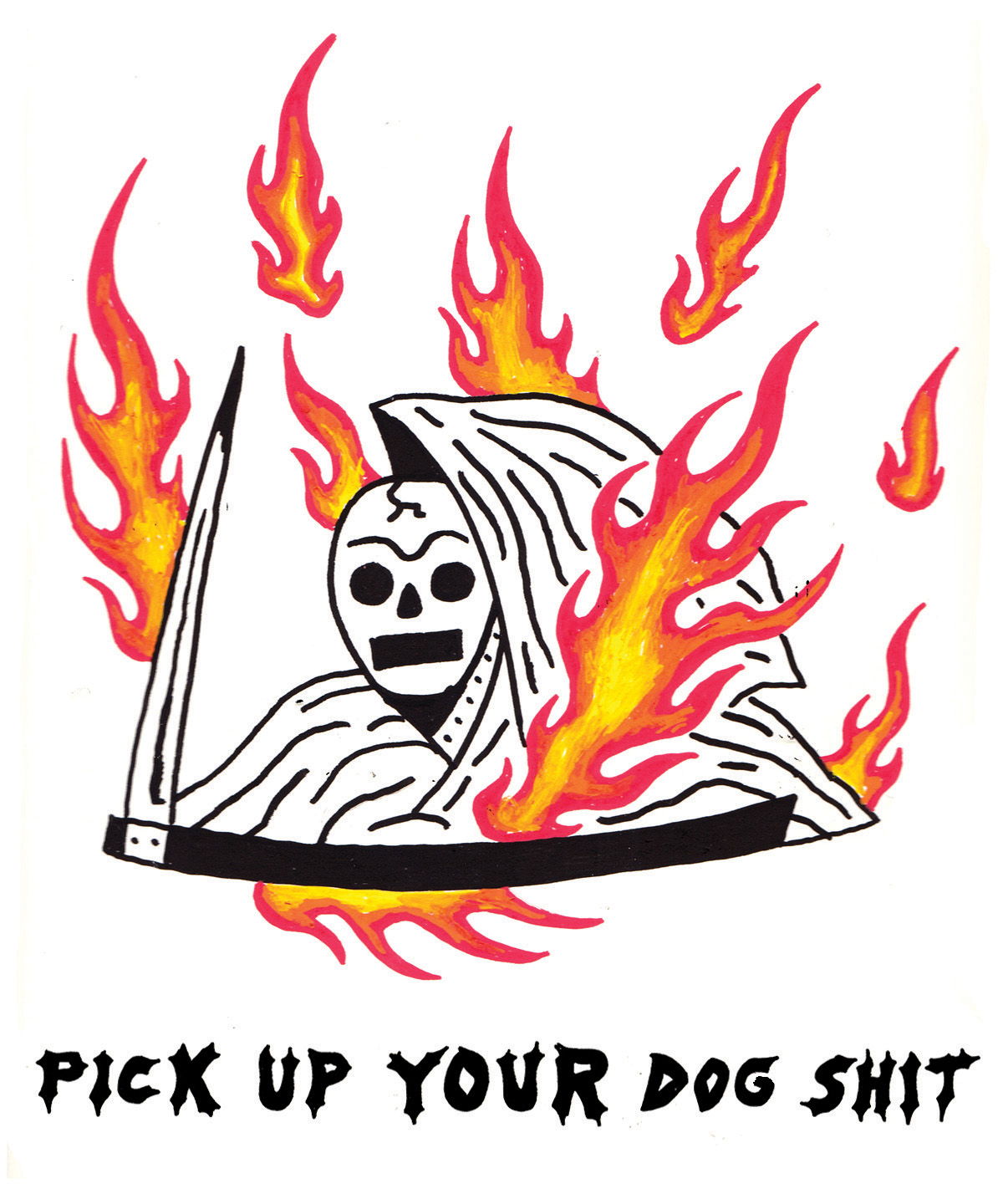 Philly is cool because everything is accessible. It’s a small city, so everyone kind of knows each other and there aren’t that many galleries. I have a good group of friends who all do similar kind of stuff. I print all my stuff at this local print shop and there are a bunch of guys there that do a bunch of similar stuff, like making shirts. It’s a good crew over there because we all just talk shit to each other and keep everyone in line. If you make something that’s not so great, somebody will tell you. It’s a good process.

Have you lived anywhere else outside of Philly or the East Coast? Or wanted to?

I grew up in North Jersey and moved to Philly eleven years ago. I love Philly. I think I will always have a home base here to some degree. But I am definitely over the weather and would love to be able to spend some time on the West Coast, definitely during the winter. Philly is such an easy place to be. You can buy a house, you can have a studio. As opposed to New York, where most of that is not possible. I would definitely not move anywhere else on the East Coast. 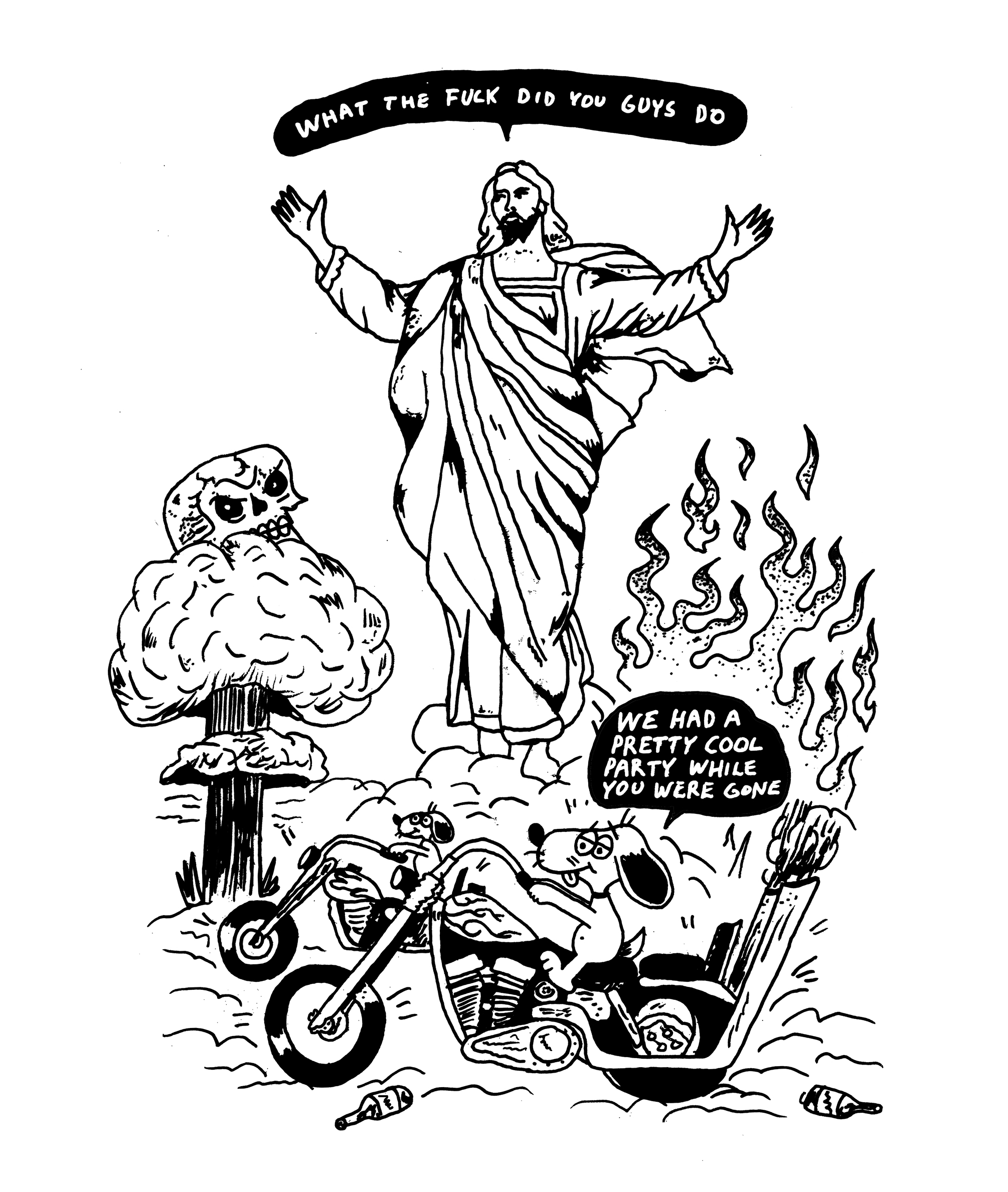 Where do you find the most inspiration?

Sometimes it’s just traveling to another city and spending some time there. I feel like when you’re home you start to get locked into the same routine, go to the same coffee shop, go to the studio, see the same things. I was in Puerto Rico last week, I go every year just to get some reprieve from the winter. We were buying ice for our cooler and the bag had this wild Puerto Rican design on it. I was like, “Oh shit this is so rad. I want to make a t-shirt with a design like this. I came home, drew some stuff up, made a shirt, and that was the shirt I released today.

Do you usually go South for the winter?

Usually every winter we go for a week. Last year we skipped Puerto Rico because of the hurricane and went to Costa Rica. Just after the holidays, get the hell out. Drink 600 beers.