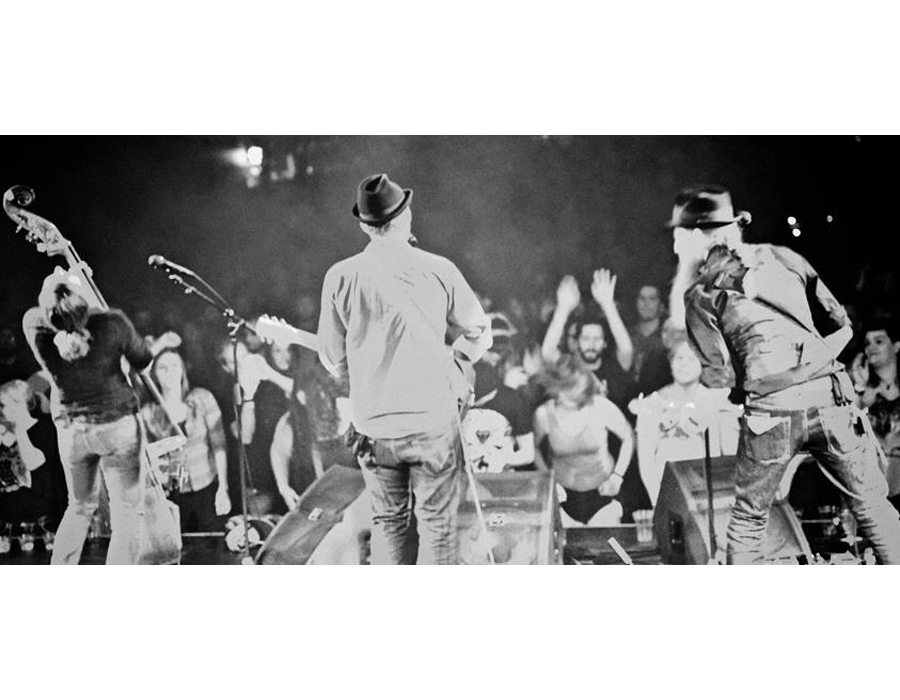 The Devil Makes Three does a lot of things well in making the band’s brand of punky folk music, but it does one of them even better than the others. It’s not that the band is easily one of the most engaging and dynamic live acts consistently on the road, turning string-based, love ballads and ferocious stories into lit up and charged, barn-burning stomps. Their sound comes at you like a buffalo, barreling straight for your body; your heart feels the floor and your skin gets the hair shaken clean off of it. What they do so well has to do with how they work and create in this new tradition of old tradition.

The Santa Cruz, California-based, band has, for ten years, been making rollicking folk music that adheres to plenty of the timeless standards set forth by Hank Williams in the 30s, and 40s, Townes Van Zandt, as well as the writing genius of Raymond Carver, but it has added its new accents to the genre as other younger groups have of late. There’s certainly been a renaissance for alt-folk and newgrass music in recent years, not only in smaller, niche circles, but in a greater realm, and The Devil Makes Three has tirelessly put its greatest efforts into its authentic sound.

There is nothing fabricated or staged in the music that each of them – Lucia Turino (upright bass), Cooper McBean (tenor banjo and guitar), and Pete Bernhard (guitar) – make, just an extension of the devastating and downright pretty feelings that really must rest in each of them.  As the band starts its largest tour yet, guitarist and lead singer Pete Bernhard took the time to talk about learning everything they know from Fugazi, endlessly driving around this country in circles, and channeling Woody Guthrie for lyrical inspiration.

The new EP features two tracks, “Dragging Chains” and “This Life”, both held back from the sessions for I’m A Stranger Here; how come these songs didn’t make it on the I‘m A Stranger album?

We wanted the album to fit on vinyl record so we had to drop two songs to fit it. We loved the songs but for the sake of audio quality they had to go.

A 25-date tour, selling out 3,000-seat venues, touring with Willie Nelson, making the Billboard Top 200 with I’m A Stranger Here; has there been a moment where you’ve stepped back and said “Whoa, holy shit, when did all this happen?”

We have had many holy shit moments, Willie Nelson and Allison Krauss definitely qualifying as some of the most memorable. That said we have experienced ten years of slow-burn growth as a band so every year has been better than the last.

Your songs have melodies that are just as devastating as they are downright pretty; more importantly each track truly demonstrates your guys’ knack to tell a story like few can. Tell us a little about the writing process and any lyrical inspirations for I’m A Stranger Here; it’s quite a dark one.

Why thank you! I feel like a song has to tell a story and if it doesn’t it’s largely not worth listening to. My lyrical inspirations for this and all albums to come include: Woody Guthrie, Townes Van Zandt, Howlin Wolf, Little Walter, Bob Dylan, Robert Johnson, Hank Williams, Henry Miller, Raymond Carver and many others too numerous to name. I always have loved songs that tell you the truth and weave it into a good story. Stranger is dark and to be honest the last few years have been a very dark time for me. As a band we had many friends pass away for various reasons. All of these events led to a fairly dark album but we also love the darker material anyway even when everything is going well. Country and folk music has never shied away from that kind of subject matter (until recently with the advent of pop country) and I want to try to carry that tradition as far into the future as possible. Songs about heartbreak, death and dishonor have always been my favorites.

How much has your seemingly endless time on the road, bouncing from one city to the next, contributed or cultivated the band you guys are today?

Touring is how we got to where we are today! We started traveling in the first year of our career and thanks to our fans were still going. We have spent the majority of our adult lives on the road. We have learned everything we know from driving around this country in circles. We have yet to tour Alaska or Hawaii but other than that we have been pretty much everywhere. I loved traveling before the band started and I love it now ten years later.

You guys recorded I’m A Stranger Here live in one room, hit the little red recording button, and when you would get a good take you guys stuck with it; what is it about this really free flowing recording approach that you guys prefer?

We find that approach to be the best for us to get the sound we want. All my favorite records were recorded using that method mostly due to technological limitations of the time. Chess Record and Sun Records made some of the best records I have ever heard and all of them were recorded live in one room. On these records you can hear people make mistakes and you can hear things go wrong, you can hear the singer straining his or her voice. You can hear when the band got the best take of the night and knows it. Something about modern records where everything is perfect and played to a click seems dead to me. A record is just that, a record of people playing music together.

I imagine it’s much more fun to get in the groove when playing together in a room, than when in separate recording booths.

Playing and recording together is the only way we know how to do it.

There are bands who, when you hear their recording, they sound on point and energetic, but then when seen live, fall flat or barely live up to the recording. In your case it’s the total opposite. While you’re records undoubtedly capture the band’s energy, your live show blows anything you hear on recording, out of the water. What do you guys love most about the live show? Do you think that your guys’ music is best served live? Why?

Our music is best served live. We have always loved to be on stage and to let the audience be part of the performance. We grew up listening to punk music as well as folk and country and we have always loved the energy of the live show. We learned everything we know from the punk scene and DIY bands like Fugazi. Thanks Fugazi.

We tend to only band crush on people who are long dead. Im not sure what that says about us as people…. I’m currently listening to Bessie Smith.

Be sure to catch The Devil Makes Three on their largest tour yet, including shows in Boston (tonight, 1/10) and more than a handful of shows in California.