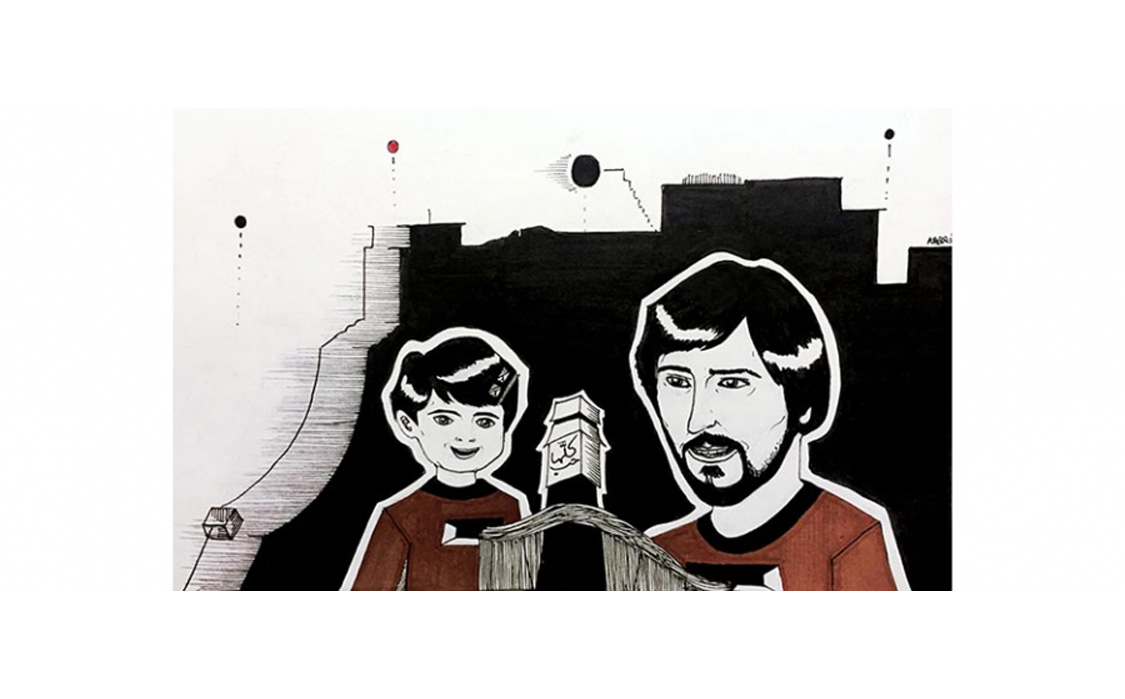 The Fruit Of Your Loins

My first memory, the undeniable evidence that I was once a baby with no stories to tell, is of my father. Jet black long hair, matching beard, he smiled and carefully placed me on the bed. This image of him remains vivid, it is one of the dearest memories I hold. Our relationship, like most father and daughter’s is unique and at times frail. Our strongest bond and my two most effective weapons of daughterly manipulation have been my ability to speak arabic, his native language, and sing every word of Syria’s national anthem.

My father was born in an often unmapped village known as Amar Al-Husn, it is located on Syria’s Northwest region. The area, widely recognized since 2012 as the target of brutal bombings, drone attacks and religious conflicts is where, long before this devastating civil war began, his precious childhood memories took place. At eighteen he left his mother to meet of his own father, who had abandoned the village to work in Barbados when his son was still in the womb. The reason for the move, still remains like many of the details of my father’s life, a mystery to me. Gambler, gipsy, hustler, anything but fatherly. Anything but a role model.

At the age of ten, everything changed, nature took its course and we drifted. We no longer tangled our hair and made my mom guess who’s whose, I no longer wanted to speak arabic. Three years later, in an attempt to get closer, we travelled to Syria. The hot Middle Eastern summer, the deserted landscape, the small shack dad used to call home, the olive trees, the wild foxes, the ruins of Palmyra. Even the castle once inhabited by Crusaders didn’t distract me from Spiceworld (1997) playing in my trusty disc man. I wasn’t impressed. This probably hadn’t been the best time to expose a western teen to the old world.

But today, almost seventeen years later I have to accept the crushing truth, I might’ve hurt his feelings. We’ve never had lots in common and now that I think about it, anxiety, hypertension, insomnia and a strong affinity for the colour black, read more like the symptoms of a new disease. The cultural differences between us have been hard to ignore. For example, my idea of comedy is a lengthy monologue. His? Any animal with a hat on. In the midst of contemplating parenthood and at the risk of writing an apology letter, I’d like to say: dad, I’m sorry. I should’ve let you love me more.

“O, Amar, cradle of my love / I cannot bear being away from you / Awake or asleep, I dream of you, / Your memories buoy me up on / Wings of ecstasy and love.”

As a childcare professional. Actually I’m a nanny. Who I am kidding? What I do is glorified babysitting. I come across a lot of fathers. From the clumsy, too-nurturing-for-their-own-good dad. To the hands on, almost too committed version. But no matter their weaknesses and strengths, nothing compares to the almighty mom. The four-handed, two-brained creature capable of breastfeeding with one hand and quietly knocking down a brick wall with the other. Amazonian warrior, goddess of all kingdoms, holder of bandaids and provider of no-crust sandwiches, mom. As much as I love this stereotype we have to break it down. We have to let mom be that and whatever she wants or needs to be. You see, I was raised by a super mom and of all the things she taught me, probably because she was too busy holding my world together, she forgot to tell me to ask more of my dad.

A lot has changed since then— fathers are now more present than ever before. We see them at the park playing catch, we see them at school pick ups, we see them at the supermarkets managing tantrums, we even see them at hair-braiding workshops. According to the Pew Research Center, the number of stay at home fathers in the United States has doubled since 1989, from 1.1 million to 2.2 million in 2012. Although the research demonstrates that most of these dads are at home only because they’re unemployed, and even more frightening, only a mere 5% are at home to specifically care for their family, the real attention grabbing  information was the following: “The public is largely supportive of the idea of mothers staying at home with their children, but they place less value on having a stay-at-home father.” Yes, an entire 51% said children are better off if the mother is home and doesn’t hold a job, while only 8% said children are better off if the father is home and doesn’t hold a job.

The only finding I see here is that we’re suffering from a serious case of double standards. However, not all interviewees are still living in the XVIII century, 34% say children are just as well if the mother works. But then we’re blasted back to the time of the witch hunts when you hear that a hefty 76% of those interviewed say the same about working fathers. Sad face, knife emoji.

Look, my concern here is not who stays at home and who works, because an almost equal percentage of mothers (52%) and fathers (48%) said they would prefer to be at home raising their children but can’t because they need to work to earn that sufficient income we all know is an essential element to raising children and not starving them to death whilst trying. My biggest anxiety is the value we place on the family structure, not to mention the complete exclusion of same sex parents from the study. To what the Pew Research Center washes their hands from all sins by saying “…when discussing stay-at-home parents, the Census typically limits analysis to families with a married husband and wife, where one spouse is in the labor force all of the prior year. In contrast, the definitions used here are not contingent on marital status, having a spouse or partner of the “opposite” sex, or on the work status of the spouse or partner.”

Tighten up your girdles and pantaloons people, we’re going to a hanging at the town square. Which brings me to the pretty amazing young working fathers I know, one in particular. He comes home from work straight to the kitchen, talks and listens to his daughter, brushes and dries her hair, takes her camping, encourages and challenges her beyond her years and most importantly, he believes in her. But this wouldn’t be possible without a partner that isn’t afraid to ask for help and share the load.

I’ve been lucky enough to serve as a “stand-in” when these working mothers and fathers are out in the working world doing everything they can to satisfy every need of the vulnerable lives they’re responsible for. What I’ve learned from them cannot be measured in any existing form of currency.

A big portion of being a nanny is reminiscing to when you were a child, how you would have liked to be treated, especially in stressful or highly emotional situations. Those short moments after a tantrum that seem unimportant and vague, make all the difference. And, for too long gender has had a lot do in how we’re taught to deal with emotions; “Boys don’t cry”, “Girls don’t swear”, “Smile” and so on. I only bring it up because I remember one of my pre-teen tantrums where I mouthed recklessly to my father, “I bet you wish I was boy” and stormed off. He followed me to my room and told me he would never wish for me to be anything else than what I was or wanted to be. The often villainized, patriarchal Middle Eastern man being inherently feminist. With only a couple of words my father destroyed every possible male over female hierarchy I could be cooking up in my head. What saddens me is that vestiges of patriarchy aren’t hard to find on some new moms and dads, if you look close enough you’ll hear them say how happy they are to have or to be expecting a boy. If you look even closer they’ll support their statement and educate you on the many “pros” of having a boy and completely ignore the fact that some of those boys will become fathers or might even be women all along.

Both of my parents worked full time and I don’t believe having my father at home was going to make our relationship any better. Sure, he never played dolls with me, brushed my hair, or asked me about my favorite movie, but that doesn’t mean he didn’t love me any less than Danny Tanner loved his daughters. Our differences run deep in the veins of Western Colonialism, immigration, and globalization. And if you think that might be a long shot, let me explain. I was born and raised in Venezuela, that makes Spanish my first language. Not Arabic, not English. Spanish.

Soon after I started writing this piece, I gave my dad a call and asked him one more time how our family ended up in the Caribbean and for the first time, I listened.

He told me that extended relatives had gotten to Trinidad via London on some sort of import business during the mid 50’s. Shortly after his father knew he was going to have a child, he left the village in search of better opportunities for his unborn son. His newlywed brother, alongside his wife and baby daughter quickly followed. Anyway, life got in the way and it took my grandfather 18 years to get settled, he moved around a lot, he lived in Barbados, Grenada, St.Vincent, Antigua and Guyana. In the meantime, money, letters and photographs was all he could offer. At some point, my grandfather followed his brother who had settled in Venezuela with his small family and asked his son to join him. So, on January 1, 1971 at 3:00pm my father arrived in Caracas, Venezuela. He was greeted by his father, who lifted him as if he was a baby and not a grown man. Also there, his uncle and aunty, two teenage cousins and the woman who 10 years later would become his wife, his cousin, my mother. But that’s another story. For now, I’ll just say that aside from my slightly small head, I am perfectly healthy and don’t have a tail.

I stand by my previous statement, the era of the super mom must come to an end. As well as the standardization of the family unit. Families are made of living organisms and there are no two alike. My father wasn’t meant to be the one who would teach me how to ride a bike, instead he taught me to go after what I want for myself, even if that means leaving him behind.

On May 10, 2010 at 9:00am I arrived in Melbourne, Australia, the place I’ve called home for the last five years. We haven’t held each other since. Video chats, money and text messages are all we can offer for now. It only took him 15 minutes or so to tell me about his journey but we talked for an hour. He was eager to tell me about his life in the village and how he always hung around the older kids, “I didn’t have any brothers or sisters so they raised me, they were my fathers,” he said. He also told me about a piece of land he inherited a while back in “the mother village”. He dreams of coming back to it after he retires. It wasn’t hard for me to engage and daydream about olive picking alongside my imaginary daughter. “We shall wait and see what comes of this war,” he said. I tried to give him hope by saying that it’ll soon be over. “Inshallah.”