Understanding Identity: Sofia Enriquez Uses Her Artwork as a Means to Tap into Her Subconscious

Mexican-American visual artist, Sofia Enriquez, creates poignant and intriguing work that explores everything from feminism to mental health. From her studio in the Coachella Valley, Enriquez works diligently on her personal practice, never afraid to make whatever she’s feeling at that moment. For Enriquez, she has to experience a new feeling in order to make something.

Since the age of eight, art has proven an increasingly important aspect of her life, that without hesitation, continues to evolve as she does, morphing swiftly with her ever-changing aesthetics. Intrigued by the quaint structure of Victorian-era faces, Enriques’s work boasts an earthy and natural vibe, drawing inspiration from the natural world and feminism. Her works are bespoke and hand-made, and demonstrate her fervent belief that women should be more visible within the visual landscape. Through each of her works, Enriquez reclaims space for women. Enriquez’s evocation of women as strong and multifaceted offers a poignant reminder that diverse adventures, narratives, and ways of being are possible. In a conversation over the phone, Sofia divulged the evolution of her art and everything that makes it what it is today. 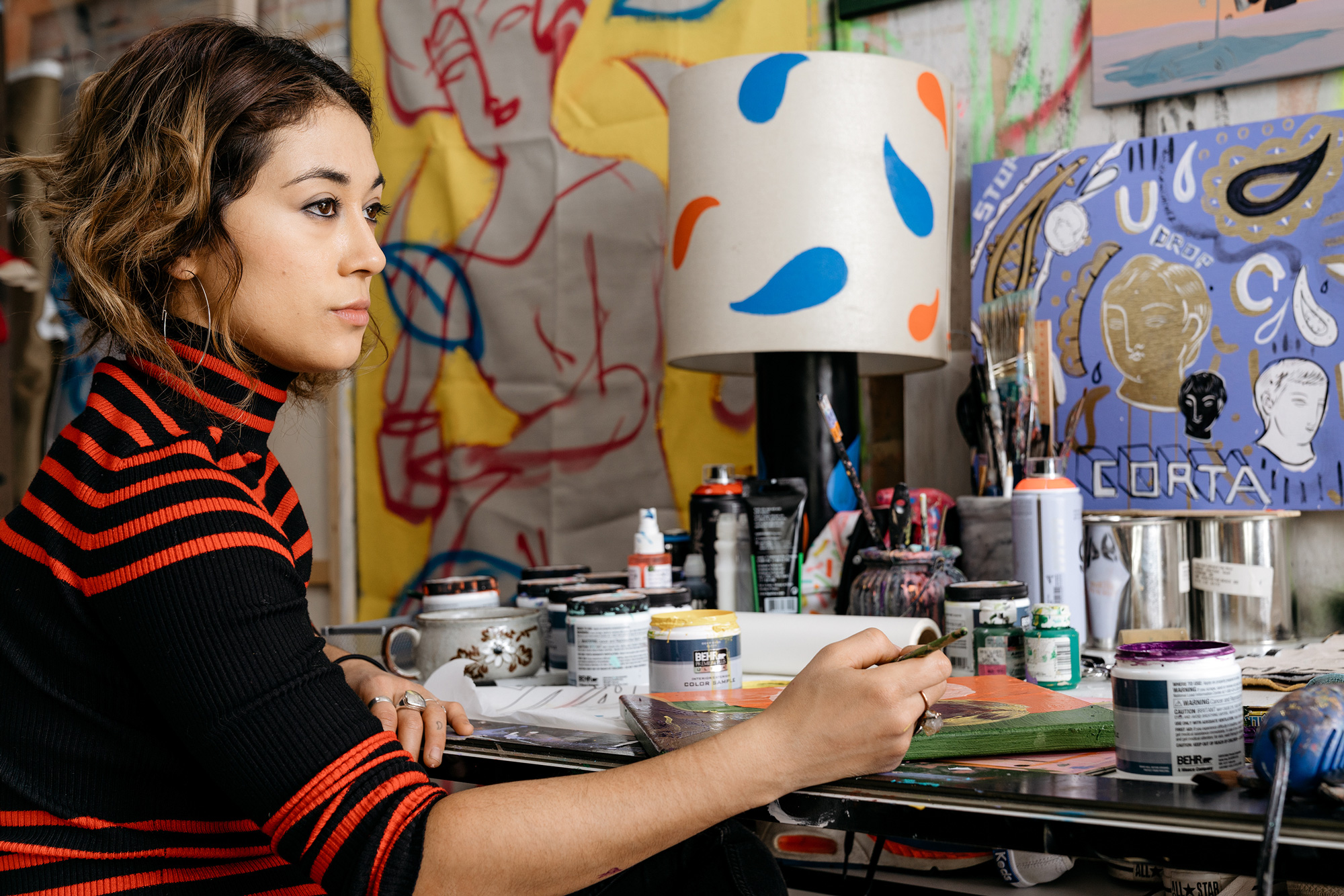 When did you first become interested in art? What were some of the first serious drawings and paintings that you created?

I started drawing around eight years old. Then, when I got into middle school, I only wanted to make art and explore different ways to dress myself. I got into art because I had a really hard time communicating verbally and emotionally, so painting the pictures in my head helped me work through that. My first serious painting was when I felt romance for the first time. I was like 12; I painted a rose with thorns that made a hand bleed when it held it. After that, it was all pretty serious.

Are you always trying to convey a certain message with your art pieces?

It really depends on the painting. Each one has a different message and it really depends on my stream of consciousness in the moment. I also started painting simplistic and timeless faces, paisleys [sic], and “MUCHO” on everything. I use these as motifs for my own understanding of my identity and playing with symbols that can be seen in many different traditional textiles in a variety of cultures. I got “MUCHO” because I came to the realization that I wouldn’t be an artist or seen as an artist unless I did as much as I could in the arts. 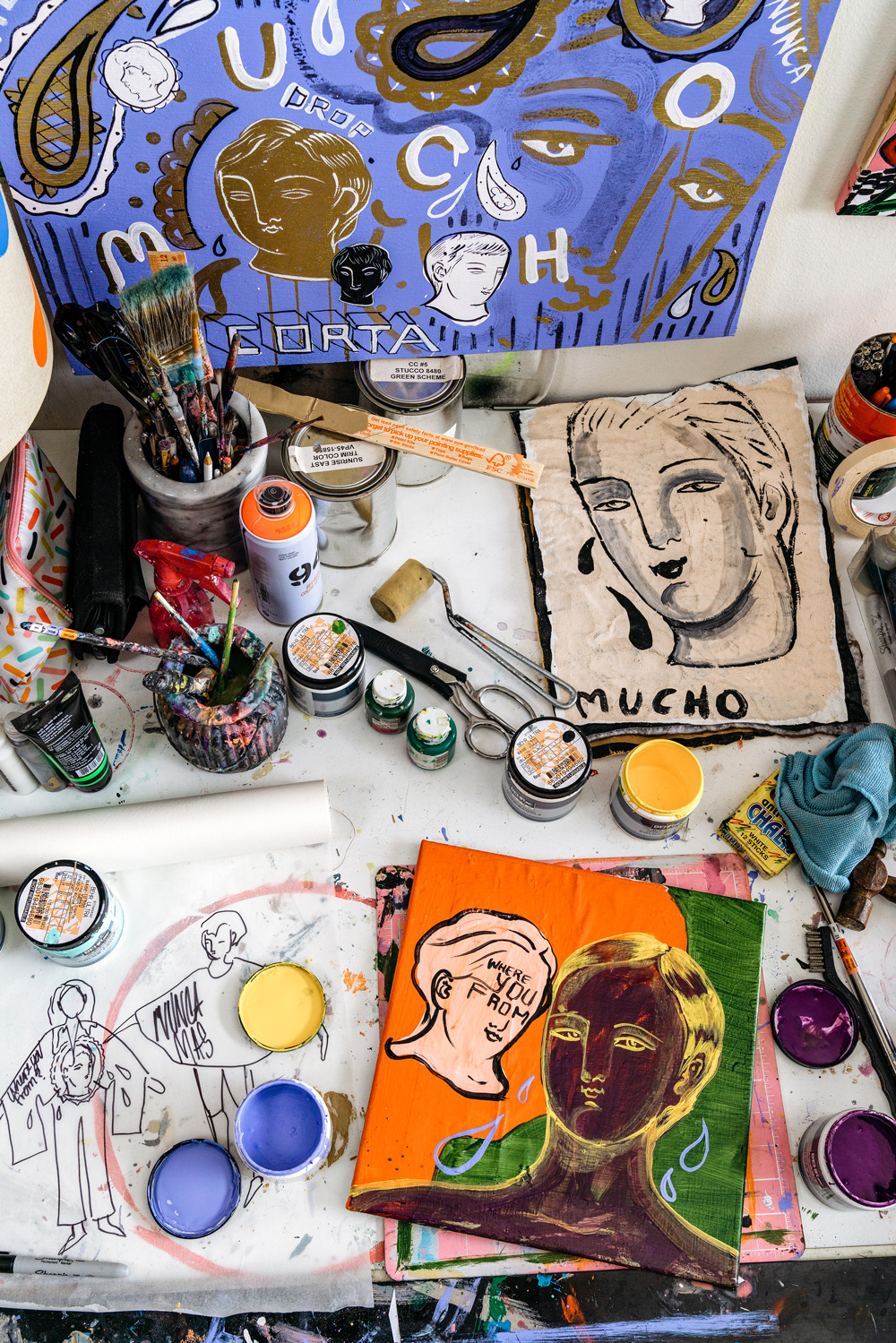 Is there a central theme or a certain commentary made through your art?

For sure. I have quite a few themes I play with. One is feminism because I’ve been a feminist since I was a kid, and I grew up in a machista world. I realized I was able to say what I wanted through my art since I couldn’t verbally. Mental health, the core reason I make art. It helps me stay present and tap into self-awareness, which is something I struggle with. I have depression and art helps me cope with stuff. Work; overworking is the only way I’ve been able for me to prove to myself and to others that I am an artist. I don’t want to just be an Instagram artist that makes stuff for people to maybe look at for two seconds and maybe like it. I make art and change the visual things as much as I can, or what I like to call, mucho. My culture; I mostly speak Spanglish, so I use a lot of Mexican-American cultural references in my work like small phrases like, “tranza,” “quiobole,” “k no,” “oh pues.” I like to mix it up, throw some English in there like, “um no, still here.” Most of it depends on how I’m thinking. My paintings are like a stream of consciousness. Romance; not just romance with like a partner, but like how to love myself. Painting self-portraits and trying to paint in the language I speak is me just trying to figure out my identity, which is funny because I feel like a lot of artists do that. They’re just painting themselves over and over again, at least figurative artists are.

How does your heritage and upbringing tie into all of it?

I’m Mexican-American and I grew up in the Coachella Valley. Both my parents are from Mexico. I grew up speaking Spanish and I grew up working with them. I got my work ethic from my family — my slang, my medium, my sazon. My art is just a way for me to try to make sense of what I’ve gone through in my life. I grew up knowing I had to work fucking hard and work with what I have, and really just make the sacrifices my family made; proving that crossing over here to this country was worth it. I mean, yes, I’m doing all this for me to be happy, but, in some way, I feel like I’m doing it for them too. 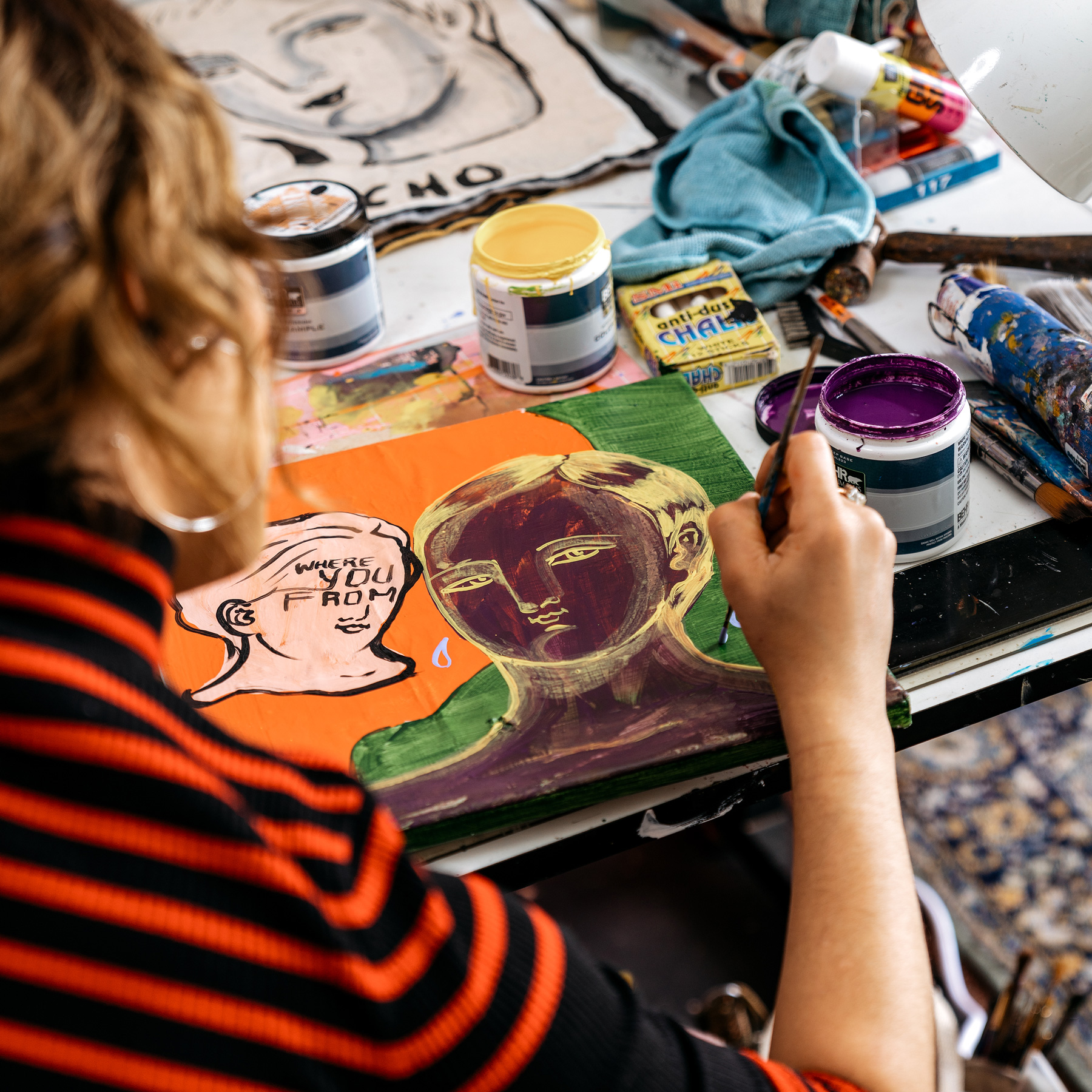 Who is your biggest inspiration when it comes to your art?

So my list of artists that I’m inspired by is pretty simple. Frida Kahlo ‘cause she painted her dream-like portraits of herself and her family and I love her use of iconography. Niki De Saint Phalle — just an all-around badass artist that built amazing structures and was very open and honest about her view on feminism, men, and culture. Henri Toulouse Lautrec; I’m obsessed with his figures, his color palette, the looseness of how drunk the paintings look, but not in a sloppy way. He just understood shape and composition. Barbara Kruger — her boldness, simplicity, and clever presentation. Helmut Newton — androgyny and what sexiness even is. Matisse; he was kind of a weirdo, but he totally had the warmest and most romantic paintings. The hieroglyphics of Ancient Egypt — I would stay in the library as a kid sitting in between isles, just turning and studying every page of any Egyptian art book I can find. I don’t even know why or how I got into it, but I think it’s because of how curious I got wanting to know what it all meant. Kerry James Marshall. Oh my goodness. The scale of the paintings, the stories he could tell in just one painting. I think he’s got such a beautiful and sophisticated style.

What is your process in creating your masterpieces?

It depends on what I’m making. If I’m painting on a new outfit, I am trying to create a visual dialogue with a stranger, aka creating an icebreaker. If I’m painting a mural, I try not to think about what I’m going to do too much and try to take up as much space as I can because I only have a limited amount of time I’m going to be there. If I’m painting works, I try to figure out what exactly it is that I am feeling. Sometimes, the picture just pops into my head a few days before I start actually painting the image. 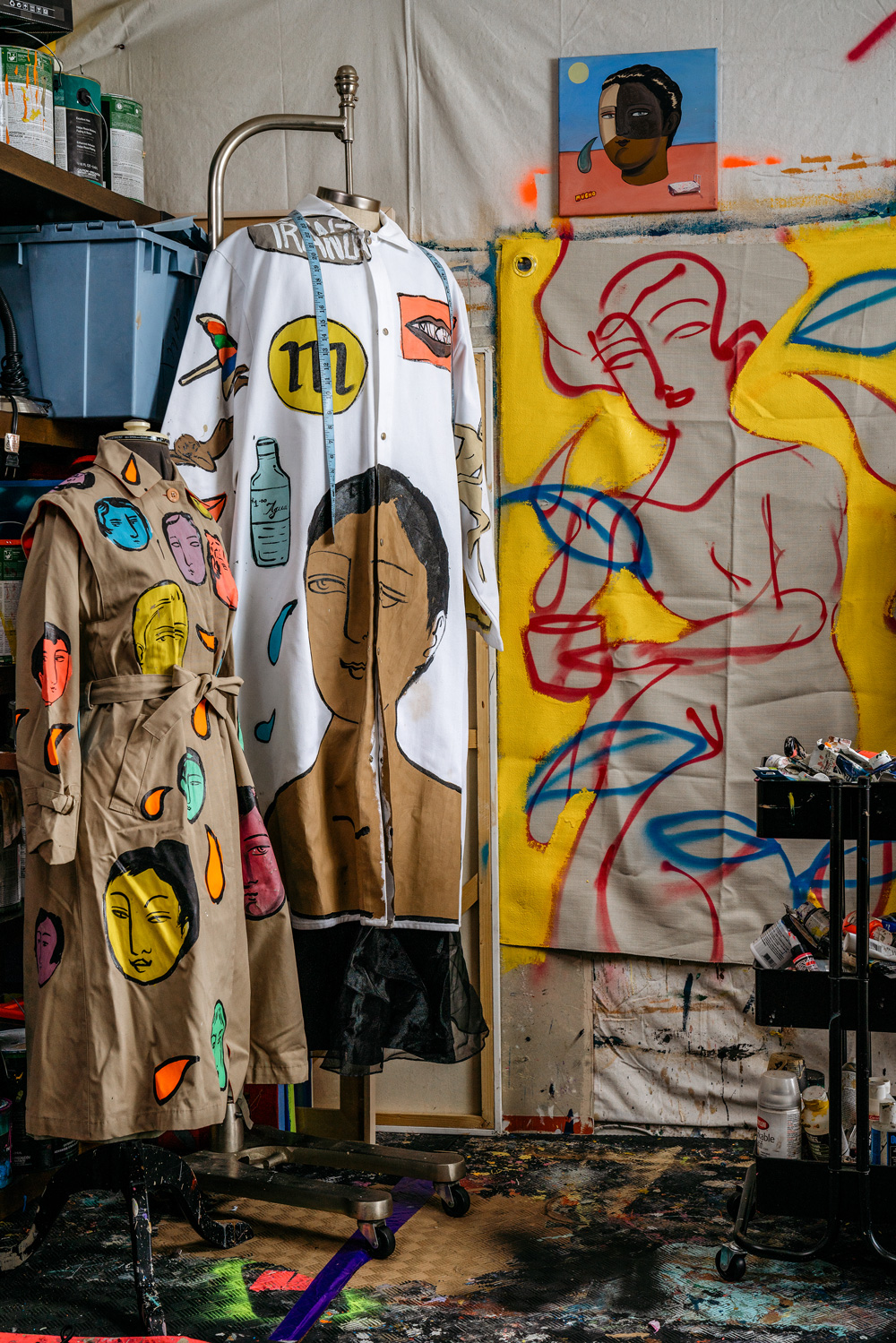 What do you hope to achieve?

I hope to sustain a successful art career, show work in museums, work on some more installations, and tally up on some more murals.

Is your work ever politically charged?

I painted a mural in Coachella called “Empowerment of Women.” It’s dedicated to the diverse group of Womxn in the valley and celebrates them. While I was painting it, I was approached by a male well-known artist. He asked me, “What the fuck do [you think] you’re doing? You need to learn your place, little girl. These walls are for real artists and you’re not a real artist, sweetie. How old are you even? You need to respect these sacred walls because your art looks like shit.” I just looked at him and said, “Wow, that’s a bummer.” I mean, it was my first mural and large-scale piece ever in public, so I was super vulnerable. I was like 22. He ended up trying all these ways to get the mural down, but the city gave me permission to have it as a permanent piece in Coachella. So, after that, I started putting more feminist emphasis in my art—drawing faces that look like either gender and using paisley or [other textiles] that are worn by both genders. I’m just trying to find ways to find the connections between people so I don’t ever have to feel less than like I did that day. Even when I’m teaching some art classes, I definitely try to encourage girls to work together and highlight their individuality. Like I wouldn’t know if that’s considered political, but I’m doing what I can, based on my personal experience as a woman of color in the art world. 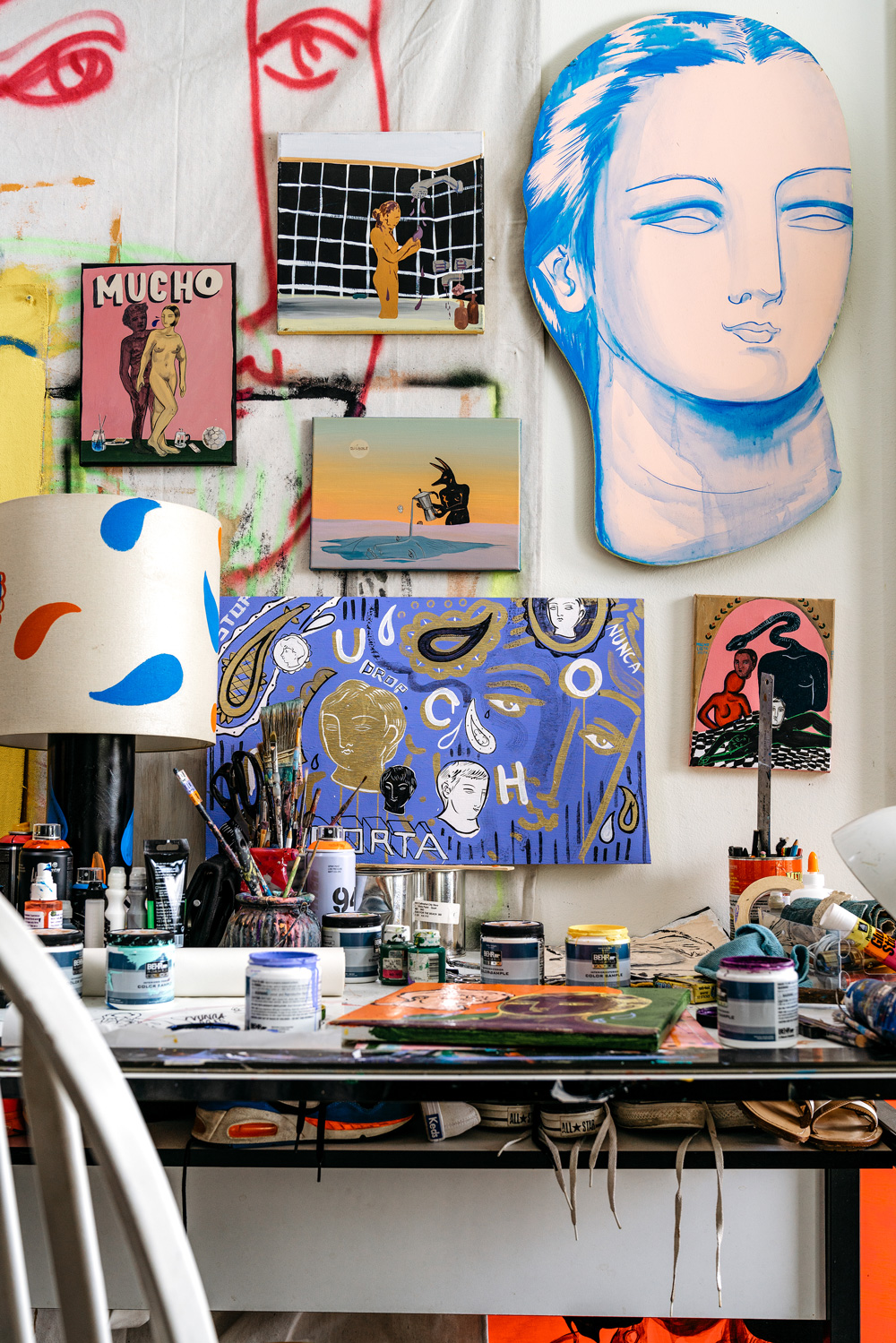