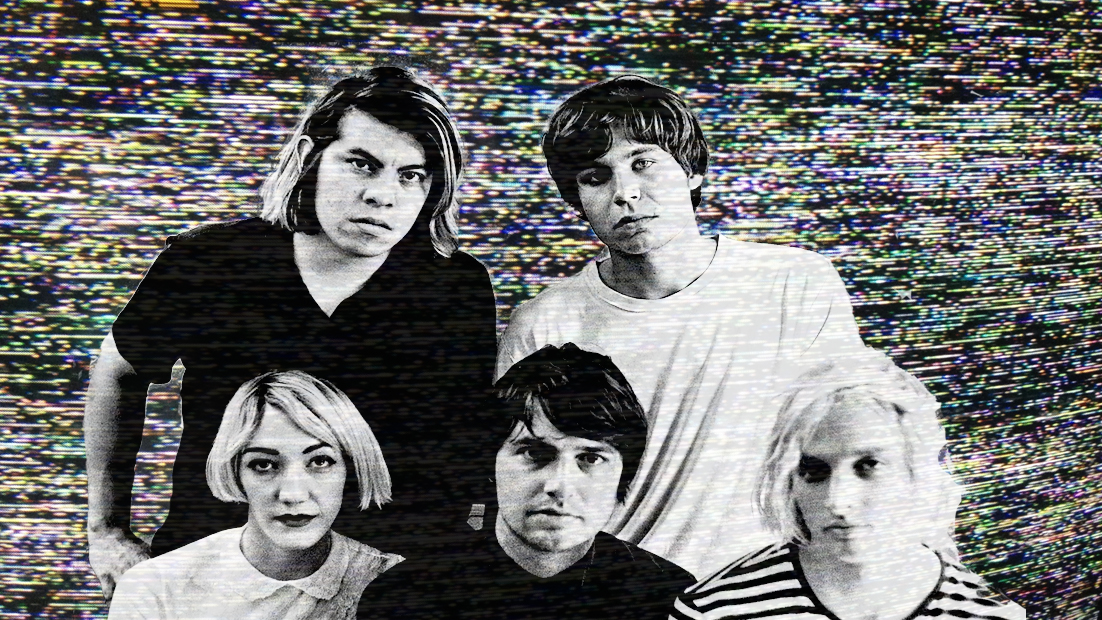 Oh Lolipop Records! Amadeus finds itself constantly drawing from the eclectic Los Angeles label to provide the soundtrack for every mood we find ourselves in with their range of up and coming songsmiths. So it comes as no surprise that Lolipop has helped spawn our latest music obsession: Drinking Flowers’ new EP, Shadow Show.

The five post-punk aficionados, who all hail from Los Angeles, have released an array of EPs that sonically range from the lo-fi ramblings of garage rock, to their most recent psychedelic-charged, shoegaze style of songs. With their debut EP, Sanity Restored 1972, which was released two years ago, Drinking Flowers has managed to evolve from the monotony of an everyday garageband, adding their own sonic flares and musical influences that make Shadow Show a distinctive breath of fresh air in a rather convoluted LA music scene.

Shadow Show is not an album that will get lost amongst the shuffle in your repetitive iTunes playlists. The EP takes listeners back to the nineties, transporting them to the long lost International Pop Underground, and reinforcing an obvious shoegaze style of blisteringly loud and dream-like reverb that helps make the EP come together as a complete record. Alex Galindo of Drinking Flowers spoke with Amadeus about working with Zine Police artist Alex Schubert for the EP’s cover artwork, the camaraderie felt amongst the Lolipop community and their obsession with Philip Oakey’s (The Human League) hair style.

Tell us about the inception of Drinking Flowers. How has the group evolved – sonically and writing process – from when it first began a few years back?

Our drummer Dominick and I met at a restaurant job. We went to the same high school but we were too far apart in age to really know each other at that time. Somehow we met our bassist at work also who managed another location. Our band was really born out of the ashes of a short-lived project between Dominick and I and a third person. The group has evolved tremendously since our inception. We were obsessing over a few different albums that touched on the neo-psychedelic sound. I think we tried to emulate that and that was one of the main building blocks of our current sound. We now have a very open-ended approach to music these days and are not too concerned with being purely any one particular sound. In fact we stand against that notion…genre-oriented music is dead unless you’re trying to be ironic or something.

Your most recent EP, Shadow Show, sounds like it took a different turn in sense of sound/style compared to your past releases. Was this a conscious decision to steer away from a specific genre?

No, I don’t think it was a pre-conceived thing really. Since we were limited in space – it being an EP – we subconsciously knew we had to make each song count. Like I said we didn’t have any planned concepts behind it, but I think the format and length shaped our decisions about what songs we we’re going to use. At the very least we knew we wanted a variety of sound.

The last EP was also recorded with Lolipop Records; does the process get easier working with the same group? Was the process relatively painless for the band?

Yes it was recorded both at Lolipop’s studio in Los Angeles and Dahga Bloom’s studio, known as Thee Mens Warehouse). The process does get easier naturally. Before, when we recorded, we had to really put in a lot of effort into tracking parts over and over and I think it mostly had to do with our musical inexperience. We’ve gained a lot of knowledge from playing hundreds of shows, and recording in various settings. The process was anything but painless or effortless, but still well worth it!

“Pop Underground” has been getting the most lyrical attention from fans and audiences. What was the inspiration for this song?

The inspiration actually came from a book I was reading traveling home last year. It was “Love Rock Revolution,” a detailed story about K Records and it’s founder. K put out 7″ vinyls of their favorite artists around the world and called the series the International Pop Underground.

I was playing around with the words in my head and some of the great ideas Calvin Johnson had about his conception of the phrase. The song is really about artists and writers and thinkers and art consumers who stand against the wretchedness of our current political systems. In my head I imagine a small army of underground artists all hanging out in a salon talking shit and drinking themselves into oblivion, all the while opposing the various human-made things that make our world dumb, dangerous and unfair.

Tell us about working with Lolipop and how the camaraderie amongst up and coming artists is gradually shifting within the LA music scene.

Lolipop is first and foremost comprised of our friends. We’ve known Tomas and Wyatt for over 4 years, and Daniel, I’ve known since high school.  Working with them is great they support independent artists, and really try to have the scene work for itself. They have created a scene in LA literally from nothing, and people are paying attention to it. I think Lolipop completely facilitates camaraderie between bands and tries to put together engaging shows that help everyone out involved. I don’t know enough about the history of LA’s music scene to really comment on whether or not there has been a change in artists or musicians being more or less cooperative. I have a suspicion that fluctuates wildly depending on who you talk to, and what music you’re engaging in.

Alex Schubert, aka Zine Police, created the cover artwork for your EP. How did this collaboration come about and will he be your go to artist for future albums?

Honestly, I didn’t even know who he was at first. I had seen his drawings in the past but didn’t associate the name with the images. Last year a few months before our album was due out I searched for illustrators on the web. His name came up and I clicked through different links and was just completely enamored with his style. I took a chance and emailed him and luckily he was into our aesthetic too. Almost every single person who bought our album at shows mentioned the art right away – his design and color choices have this certain effect they’re just pleasing to look at. It’s all very iconic looking. Alex has agreed to work on our debut LP’s art which will come out February 2016.

Any current band crushes at the moment?

Yes, we all are infatuated with Prince Rama. Our bassist and I are particularly fascinated with Phillip Oakey of The Human League and his hairdo. We’ve been really into weirdly glamorous bands lately, don’t ask us why.

For more from Drinking Flowers and to purchase Shadow Show head to their bandcamp.