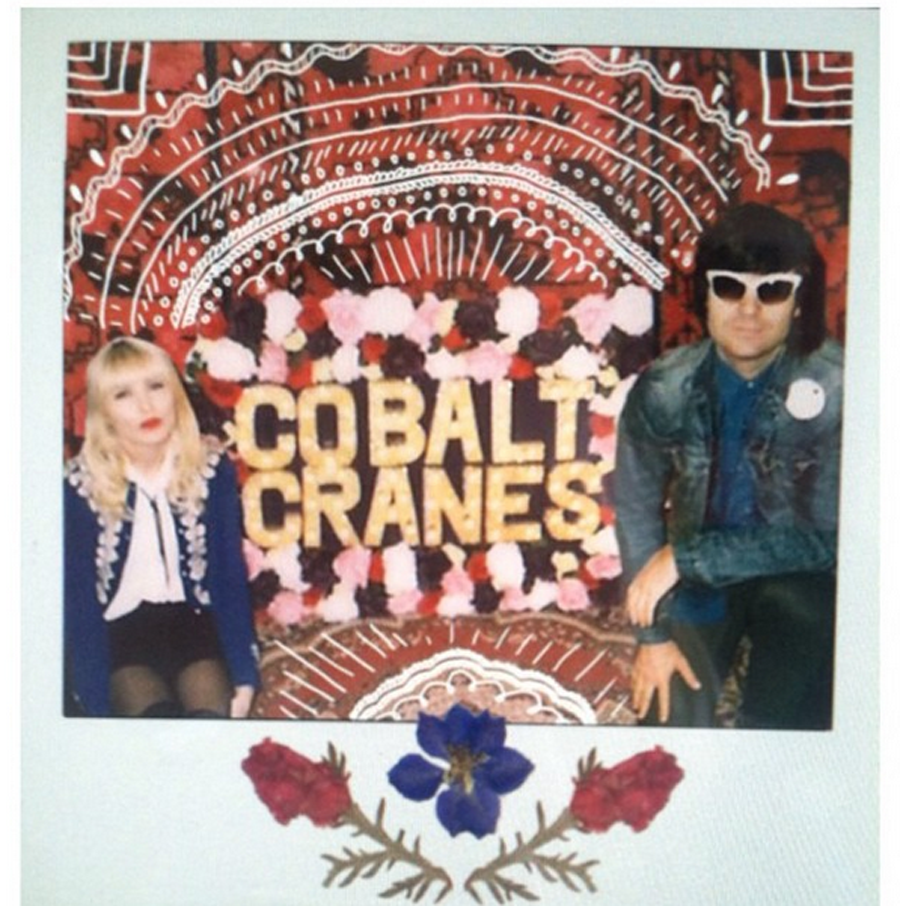 Listen Up: Cobalt Cranes Swirl In Slow Motion On ‘Days in the Sun’

For Cobalt Cranes, all things lead back to California. The band’s personal spin on the recliner-shaped state’s signature psychedelic, beach party sound culminates on their new album, Days in the Sun; a fuzz-strum/free-love storm of guitars and saccharine harmonies.

Listening to Cobalt Cranes, fans of those bands championed by Echo Park’s Lolipop Records and their coterie will no doubt find themselves enthralled by the group’s obvious nods to ’60s dream-time dementia, cultish lyrical enticements, and the positioning of an acoustic guitar against heaps of fuzz and delay.

Across the album’s stand out track “Flowers On Your Grave”, the band kicks up a swirl that matches Kate Betuel and Tim Foley’s sleepwalking pop perfectly: Guitars stretch and swirl in slow-motion layers, and the vocals seem to be calling desperately out of them. Strings buzz, strummed patterns double back on themselves and from up above it all, the LA band showers everything with heavy, cosmic harmonics. It’s a pop-rock album with some influential swoon: Anyone whose rock tastes run to the “dreamy” needs it, or at least needs “Sundown” popping up on the mp3-player shuffle.

Before hitting the road for a west coast string of dates Cobalt Cranes’ Kate Betuel and Tim Foley took the time to talk with Amadeus about the musical movement brewing in Los Angeles, writing the new album in a motel in Kansas, and blasting Black Sabbath while driving through blizzards in Colorado.

You guys have been around, playing the local LA circuit since like 2010, how have you seen the LA music scene evolve over the past 4 years?

Tim: LA is the place to be right now. There’s a lot of great bands and a lot of good vibes. There is a really cool underground scene centered around Lolipop Records and cool shows to go to every night of the week.

What direction do you see LA music headed right now? Who are some bands you guys have crushes on?

Tim: There’s a movement happening right now in LA. It’s slowly catching on across the country. Bands like the Mystic Braves, Mr. Elevator and the Brain Hotel, Froth, Feels, The Growlers, LA Witch, Jeffertitti’s Nile, Wyatt Blair, and Girl Tears are all making really great music.
Kate: What’s great is the diversity in LA bands right now. There are so many bands I could list. I don’t know where it’s heading but I’m along for the ride.

How much does the city influence your guys’ sound and songwriting? If at all.

Kate: LA is definitely an influence. After being on the road so much last year it gave us a lot of perspective. Our album title comes from how we feel living here. There’s no seasons really, just a lot of sun.
Tim: The City has a big influence on us. So many artists pass through LA. Musicians like Gram Parsons, The Doors, Fleetwood Mac and the Stones have all been inspired by the city. I grew up in Northern California, and LA has always been this magical, sun-drenched end of the line for me.

So I read that you guys did a lot of writing of this new album, Days in the Sun, while on the road. What about being on the road did you guys find inspiring? What’s the most random thing you saw, heard or picked up on the road and that somehow made it into one of your songs?

Kate: We wrote “Flowers On Your Grave” in a motel in Kansas. The drive that day was really long and it felt very desolate. The scenery didn’t change much, it felt like we were going nowhere. The strangest thing I saw was a guy who came to our show wearing a trash bag.
Tim: You spend hours in the car on the road. On the last tour we listened to Neil Young’s entire catalogue while driving though Kansas, and listened to every Black Sabbath album as we drove through blizzards in Colorado. I remember seeing sunflowers growing through the cracks in the road a lot – that imagery made it into our new songs and video.

How does the writing process go? You guys have some awesome harmonies, where your voices so perfectly compliment each other, like on “Sundown”. Do songs just come out of little jam sessions that in turn become more structured things later; do songs come about organically?

Tim: Thanks! We both do a lot of improvising, chord changes or riffs on different instruments, and sometimes the other person will go “thats cool”. Then we’ll focus on the “thats cool” riffs and turn them into songs. All of my favorite bands or artists have a lot of harmonies. I think harmonies have a very “California” sound to them too.

Kate: Neil Young and Crazy Horse Everybody Knows This is Nowhere. The minimalism of that album was a huge influence. Sub Pop era Soundgarden, Fleetwood Mac, a little Pixies too.
Tim: We wanted to make an album that had a raw feeling like a band playing in a room, and we wanted to make it sound like it came from California. Neil Young’s Everybody Knows This Is Nowhere was a big influence. The way he uses two guitars, how they sound like one sometimes, and sometimes sound like 2. Its very similar to how Keith Richards plays on the late 60’s/early 70’s Stones’ albums.

How do you guys think your sound has evolved since your Head in the Coulds album?

Tim: On Head in the Clouds we were writing and producing in a vacuum, which allowed us to go down rabbit holes of sound and not think so much about how the album sounded live.
Kate: We wrote Days in the Sun very quickly and wanted it to sound live. There’s no shoegaze in our sound anymore. It’s more straight forward.

This new album is “California Grunge”, what differentiates California grunge from the staple Seattle grunge?

Kate: Someone called our new sound that and it perfectly summed it up. There’s light and darkness, something we constantly balance in our music. Prettiness and dirt. California grunge takes the prettiness of 60s rock and places it in a darker setting.
Tim: Vocal harmonies, fuzzy bass, 12 string guitar.

What’s it like in the studio or during recording with you guys? You started out recording in your bedrooms, does that just feel like a more natural setting for you guys? Or have you out grown that?

Tim: We still do a lot of recording at home, and it’s a big part of our sound. There’s something special about recording at home where you can do whatever you want and make sounds that are unique. But we have also grown to love working in larger studios. All of our recordings blend elements recorded in studios and at home.
Kate: We always write in bedrooms, there’s no audience. Recording at home creates a certain comfort where you feel less self conscious. It helps with creativity.

Where did you record Days in the Sun?

Kate: At Joel Jerome’s studio in Eagle Rock. It has a great vibe. The room has it’s own sound. It has the ‘magic’. He was great to work with. He really understood what we were going for.
Tim: Joel is really good at capturing a sound in a room, and has good instincts. He is also a funny guy and we had a lot of fun making the record with him.

It seems like Cobalt Cranes are one seriously hard working band; I imagine you’re on the road a lot, playing a bunch of gigs. What’s the best part about being on the road? Where have you guys had the best grub?
Tim: Being on the road is like a great adventure. We love LA, but playing in Middle America or on the East Coast or in the South, you get to see what works for different people.
Kate: The best part of being away is that you’re gone. Playing shows in front of new people is what makes it fun. Austin always has the best food.

Best place in LA to get tacos:
Kate: Los Burritos on Hollywood Blvd.
Tim: Hacienda Del Rey is a classic, although it’s in Marina Del Rey.

Best venue to see your favorite band:
Tim: We see most of our favorite shows at The Echo. But we just saw Nine Inch Nails at the Hollywood Bowl and that was pretty good too!
Kate: The Echo

Your idea of a perfect summer day in LA:
Kate: An outdoor music festival
Tim: Hanging out at a beach, stopping in to the Lolipop shop, and seeing a show at The Echo.