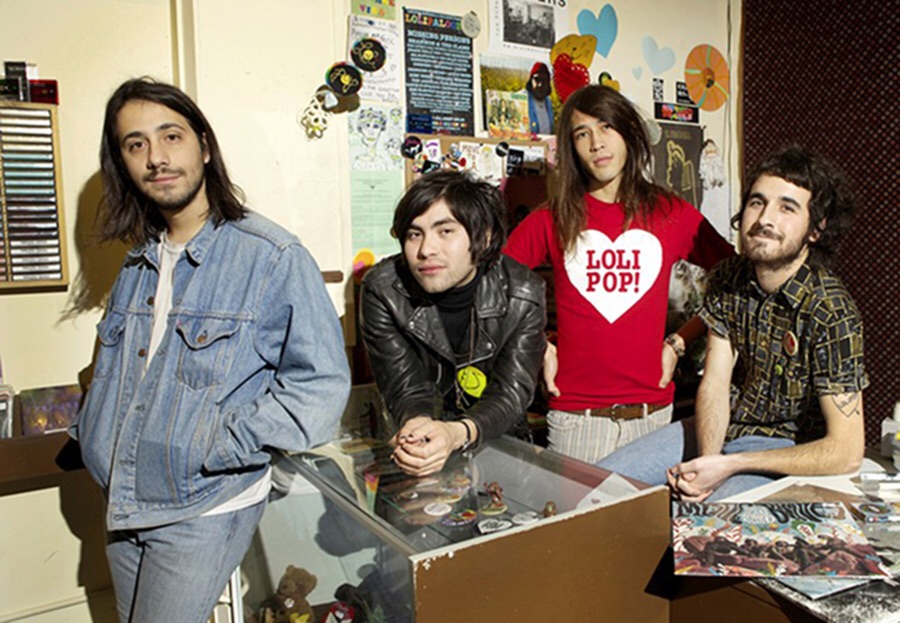 Your Ugly Sister. Adult Books. Froth. Drinking Flowers. These are not titles of raunchy adult films nor are they the names of Hollywood’s latest swanky lounges, but rather the unforgettable names of some of the first bands to work with LA’s most iconic indie record label, Lolipop Records.

Lolipop Records is more than just a means for propelling underground tracks into the LA music pool, but rather a band of psychedelic dream weavers and a “semi-revolutionary multi-cultural conglomeration of punk kids, loveless teen dreams and pop enthusiasts trying to change the world.”

For Lolipop founder Wyatt Blair, this communal space houses any and all artistic conception and provides a safe haven for the public to pop in, kick back and bask in musical ambiance.

“Our whole goal was to not be a typical record store, but to start a community here in Los Angeles, because at the time there was absolutely none; so many bands but no sense of community. We still believe in having that mentality here. It is a record store, yes, but also a place we run our label from,” Blair said. “Also a place people can just come in and hangout and talk, a place to find out about great new, old, weird, wacky, amazing music, a place to see intimate shows, a place you can always feel welcome in as a band, an artist, a music goer, etc.”

After birthing the idea of Lolipop Records in his parents’ South Orange County garage, Blair took off for Los Angeles in search of a more exciting scene, where he then began dealing hand-crafted, painted cassette tapes from his Echo Park kitchen with fellow band mate and Lolipop co-founder Tomas Dolas.

“I thought it would be so cool to be able to put my friends’ bands out on cassette, since the cost of doing so is low and the medium is so small and compact,” Blair said. “I just drew a doodle on my note pad and made a Facebook page called Lolipop Records. I originally did this in my parents garage, I hand dubbed every tape in real time and made a special crayon drawing in each tape that said ‘Lolipop Luvs You.’”

In 2012, Lolipop moved from Blair’s kitchen to its current location on Glendale Avenue, originally as a shared rehearsal space for Blair and Dolas’s band Mr. Elevator & The Brain Hotel and fellow rocker group the Mystic Braves. However, Blair and Dolas saw a bigger future for the joint venue and eagerly got to work on making it the psychedelic part-record shop, part-recording studio it is today.

“So originally we made it into a studio. Mr. Elevator and Mystic Braves split the building as our rehearsal space and a place to record and hangout. That happened for about six months and soon after the space next door to us opened up. Me and Tomas instantly thought, record store,” Blair said. “So we dedicated our life to making that space functional, and into a record store.”

Lolipop Records remains a prominent influence among the LA music scene, maintaining a truly original and eccentric persona while continuing to promote the beauty and originality of musical collaboration through a true “labor of love.”

“Two words, self sacrifice. You must put yourself in front of what you believe in, no matter what,” Blair said.

Blair, Dolas and their Lolipop comrades, Daniel Quintanilla and Ignacio “Iggy” Gonzalez, have even higher hopes for Lolipop, and if these ideas are any reflection of their past, LA is in for a beautiful hysteria of creativity.

“Let’s just say we have a lot up our sleeves at the moment. We’re trying to keep it a secret but pretty soon we will be doing a lot of different things way outside of just ‘music’ per se. We would like to give new light and progressive change to how the music business and record label business works in five to ten years,” Blair said. “We want to always keep the labor of love mentality no matter what happens or where things go!”

Trail Lolipop Records on their “labor of love” quest and find out about all of their latest musical happenings by following them on Instagram, Twitter and Facebook @LolipopRecords or at lolipoprecords.com.