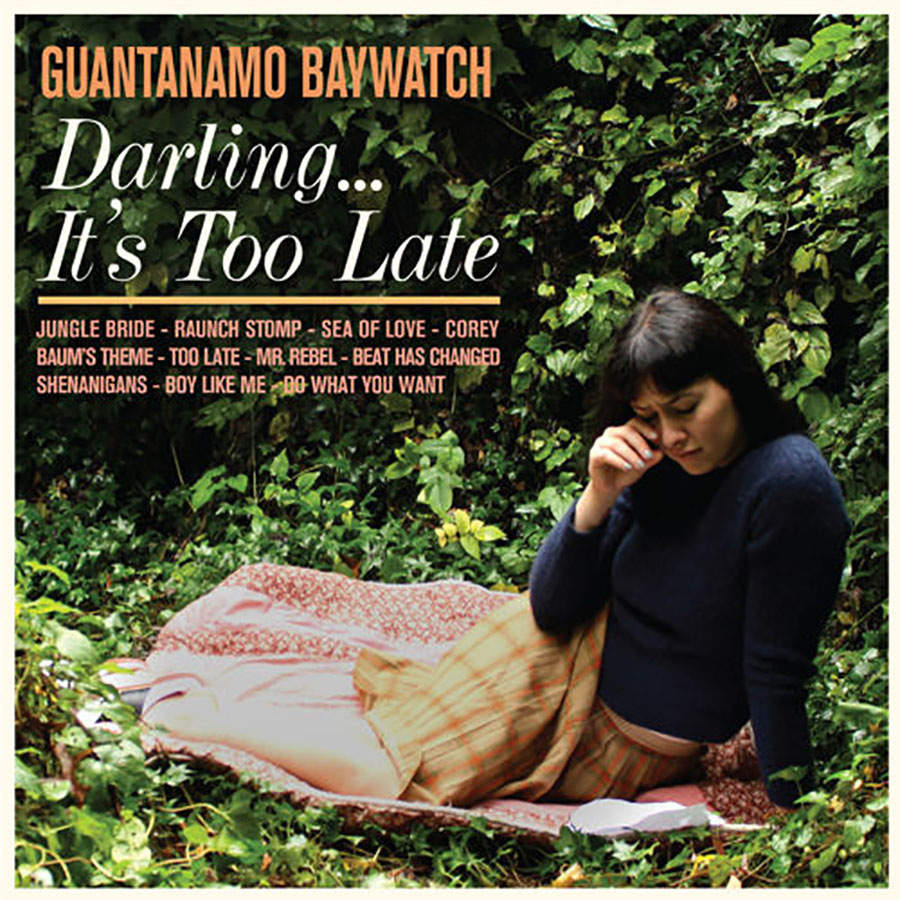 Fast-paced, ceaseless instrumentals in true sand-in-your-toes surf punk style is the name of the game for the Portland, Oregon trio known as Guantanamo Baywatch. But what happens when an established soundsation steps out of its cozy genre standards?

That’s just what they did on their most recent album, Darling…It’s Too Late, an unexpected cross-pollination of surf rock and rockabilly twang, complete with drawling vocals and downtempo-ed guee-tar and percussion, making one hell of a GBW hybrid album.

“Jungle Bride” is the album’s introductory example of surf-goes-South, pushing bluegrass appeal through a wave of California reverb, redolent of Chest Crawl, minus the wipe-out undertow. True to form, the roughness of their analog method is consistently clear, from the trilling blues-y love woes of “Too Late” to the surf-rock throes of “Beat Has Changed.”

With the soulful support of singer Curtis Harding providing back-up vocals for lead singer Jason Powell, Chevelle Wiseman on bass and Chris Scott on the drums, the audacious, rowdiness of their music lives on throughout the entire album. A trio that seems like they live on the road, Guantanamo Baywatch was able to put aside some time to talk with amadeus about their new sound, working with Suicide Squeeze Records and how they keep things interesting in the studio.

You guys recently released Darling… It’s Too Late, it has been about three years since you’re previously released album Chest Crawl. What was your outlook going into the studio for your recent album? How did you approach it lyrically and instrumentally?

We knew we wanted it to be clearer and bigger sounding than Chest Crawl. I recorded Chest Crawl myself and we did the best we could, but it’s hard to hear what’s going on in some of the songs because of our shitty recording gear and not knowing how to use it. Because we were recording at Living Room in Atlanta, which has awesome gear and guys who know how to use it and who know what we were going for, I think we were more confident about the type of songs we could try to record.

We knew we could be more ambitious with back up vocals and overdubs with those guys in charge of the recording side, which is something I’ve wanted to do since our first records. The idea of the album is still basically the same as our old stuff though. It’s supposed to be fun, have cool songs and be a little dumb. That’s my favorite kind of rock ‘n’ roll.

Darling…It’s Too Late sounds like an entirely different genre than Chest Crawl. Not that a band has to adhere to any type of specific genre, but as a group that is well known for a surf rock type of sound, where did the twangy sound come from? Were you guys listening to any other groups in particular during this time that could have influenced you in a way?

To me it doesn’t sound so different, but I guess this one focuses more on the vocal songs (even though Darling… Has more instrumental tracks than any of our other records). Also, there are a lot of low-fi “surf” garage albums/bands right now, and it seemed more fun to do a high(er)-fi record that had more of the other cool shit that we’re into like country, soul, cha cha etc.

To me, it still sounds like us and I think the songs are just better in general. I tried not to worry about fitting the instro songs into the surf-rock category either. They are just instrumental rock ‘n’ roll/pop songs, more like Davie Allen or the Ventures. Seemed better to just try and make them cool, and not worry about it.

You done good—we love it. What sort of reactions have you received from Darling…It’s Too Late?

Seems like our fans are into it. We’ve only done one tour on the new songs two weeks after it came out, so it’s kind of hard to tell. It’s my favorite GBW album, so if kids hate it, I’ll still be ok.

How was it working with Suicide Squeeze Records? This was your first time releasing with them correct?

They are the best. We’re super lucky to do shit with them. They’re super cool and laid back but at the same time very professional, generous and they work really hard. Can’t say enough good things about David and Jen and the way they run their shit. They’re like family.

What do you guys do to keep things interesting? Not only for your fans, but also for yourselves. How do you not get lost in the surf rock sound? A lot of bands produce music and it all sounds the same, but all of your songs are extremely unique.

Drugs and booze help. But having control over what we’re doing is the biggest thing. We got a silk screening setup at the house to make all our own shit, do all our posters, merch and artwork, mail out our stuff, do our own managing, a lot of our own recording… When you have a say and hand in everything you’re involved in, you stay interested.

You guys seem like you tour a lot; obviously it’s something you guys like to do. Do you prefer road life versus studio life?

Yeah we like to tour, playing in front of people and seeing all our friends. Being on the road makes you feel like you’re actually doing something. Besides just being hard and frustrating, I sometimes feel like we’re just sitting around or missing out on something when we’re recording. But I’m getting more excited about recording after this last one.

I’m sure you have heard the question before, but is this genre of music widely heard in the PNW area, or are you guys one in a handful of groups that create surf rockish type music? What made you guys want to start producing this music? What groups had influenced you when first becoming a band?

Oh yeah, there are lots of surfy 60s garage bands everywhere. Maybe not as many as in CA with all the Burger stuff, but totally. Most of our first album I wrote during high school and college before I moved to Portland or had ever heard of Burger.

I got into surf rock through old surf rock albums on CDs I found at the library and then from 90s resurgence stuff like Los Straight Jackets, Man or Astro Man?, Shadowy Men..,Bambi Molesters, etc. I always wanted to make an instro surf band like that, and just kinda met Chevy who was into that kind of stuff too. It wasn’t till we started touring that we found out about Burger stuff and then got kind of lumped in with those bands.

It’s cool cause there is a wider audience for it and more shows to play. I was sure I’d have to get fat and start wearing a mask or cape before I’d ever be in a touring surf band.

Check out Darling…It’s Too Late and keep up with Guantanamo Baywatch for tour dates!