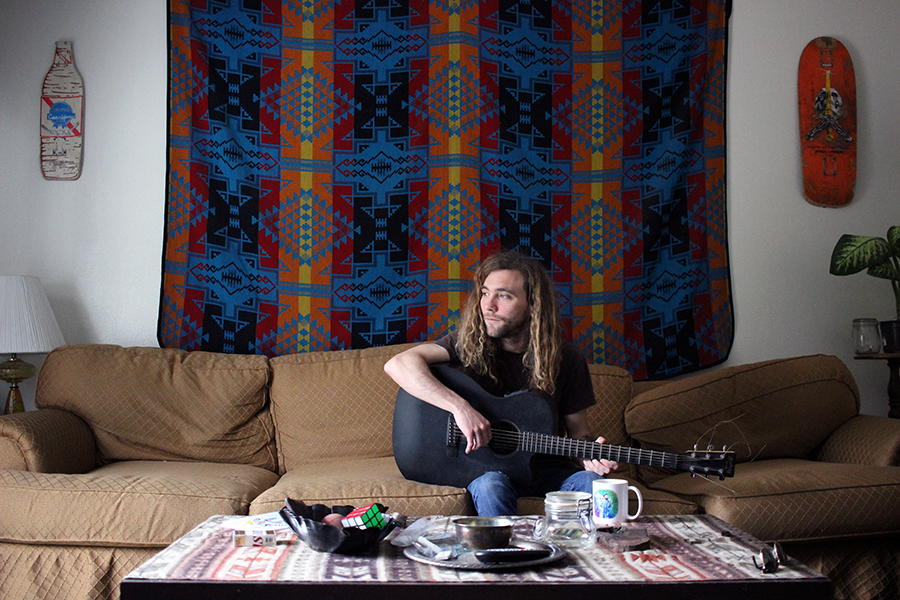 Charles Moothart Branches Out with CFM

Charles Moothart never really planned on writing an album. Following a break-up with his girlfriend, and generally feeling as if his life was at a crossroads, the garage-rocker – best known for his indispensable role in groups like Ty Segall Band, Fuzz, GØGGS and the Moonhearts – retreated to the confines of his ramshackle studio in the basement of his northeast Los Angeles home, in order to work through his convoluted headspace.

Two months later, Charles emerged from what he describes as, “a black hole,” with Still Life of Citrus and Slime, a collection of ominous and psychedelic songs, both gloriously distorted and heavier-sounding from putting the pain from his head into his tape machine.

“The whole process was about the exploration of what was happening in my head,” says Moothart. “It was like one part exploration through creative output, and the other side just trying to figure out what the fuck was going on in my life.”

Still Life of Citrus and Slime shows Charles at some of his most genuine moments of clarity – a musician consciously embracing the positive and the negative to write songs that resonate beyond the circumstances in which they were originally penned.

From “Brain of Clay,” to “Purple Spine,” Moothart’s solo-debut as CFM is a slice of psychedelic and crunchy garage rock that sporadically spirals into heavier, tripped-out 70s grooves. It’s enticing and raw, and inevitably lures you in.

We had a chance to stop by Charles’ LA home and studio where we talked about the most challenging part about taking a lead role with CFM, breaking through the wall of self-doubt and recently taking the band on the road with long-time friend and collaborator Ty Segall.

This is your first solo-project; you’re at lead now. Why was this the time, why now?

It wasn’t really a conscious decision; I just sort of started recording songs therapeutically. I wanted to see how far I could get recording songs by myself. Once I finished one and thought it was alright, it just all started adding up, one after the other. It was almost an accident.

You said the process was therapeutic…what was it a therapy for?

My girlfriend and I broke up for a couple months; that was the main thing. Just generally my life felt like it was at a crossroads. It was an easy way for me to lock myself in a room for most of the day, and explore what was going on in my head, through the music. I was trying to direct all my energy into something creative.

Is it true that you wrote and recorded the album in a few months?

Yeah pretty much. A few of the songs I had lying around. There were a couple songs that I had recorded drums and guitar for a while ago, but I didn’t know at the time what I wanted to do with them. The bulk of it was done in a couple months, then lot of going back and putting in odd and ends, here and there.

What was the most challenging part of the process?

Just getting past self-doubt. My tendency is to record something, then want to totally scrap it. Always stopping myself and not seeing something all the way through. That was the main challenge. That was kind of the whole point of doing these recording, just to not stop, and fight through the wall of doubt.

How has it been touring as the front man?

I feel lucky because everyone in the band has been a really close and old friend, so everything has been really easy and smooth. Everyone has been really supportive and they are great musicians. It didn’t take a lot of wrangling people together. Just having people that have toured before and are used to being on road, and that can show up and be ready. The whole thing was such a crazy personal challenge that I felt like I was just focusing song for song; like I didn’t even know how my voice would hold up, or if it would make it through the tour. So it was nice to not have to trip about the guys in my band being ready, and being able to rely on them to show up and bring it.

I’m definitely still working out a lot of kinks, but it was fun to be able to just go in and go for it. Every night was different; there were songs on some night that I would go in to sing and I was just totally off. Then other nights it was fine. It was a lot of blind faith, which was kind of fun and interesting in a way.

Did you let anyone hear any of the songs before it was done?

My roommates would hear me working on it in the basement, and I would bring the songs up to them to listen. I played some of it was Ty [Segall] and he gave me some input before I had written everything. I didn’t really show anyone though. I feel like a lot of people still haven’t heard it.

What was the first song that you wrote and completed?

The song “Glass Eye,” was one of those songs that I had lying around for a while, but it was super basic. I added a lot of parts and elements to it, so I guess that would be the first one. But the last song on the record is this instrumental song that I recorded in my room a while back.

I know you didn’t go into making this record with any particular sound in mind, but how did things evolve once you got that first song down?

Every step of the way was a new turn. Technically, “Brain of Clay,” was the first one that I felt like I was in the zone and gave me that push to keep trying.

Is it hard to differentiate yourself from your other music projects?

I try not to think about that too much. Once I started having these songs come together, and I knew they could actually turn into a record, I wanted to make sure that it didn’t seem like I was pulling a move or relying on my past projects to push this project. I didn’t want people to listen to the record and go, “Oh this sounds like this band, he’s just trying to ride this wave.” Our whole friend group tries not to trip on what we’ve done and have been a part of in the past, and just do what feels natural.

How did you end up working with In the Red?

We’ve worked with them for Ty Segall Band and Fuzz. It was that same thing though, getting through that wall of doubt. I played it for Ty and he said it was rad. Then I played it for Tim Presley (White Fence), and once I got the positive feedback from people I respected, including my roommates, I figured I would give it to Larry at In the Red on a cassette tape. Ty really pushed me to do so. I was terrified, and that’s been the name of the game putting this whole thing together. Just pushing through that fear. I gave it to Larry and he liked it. It all still scares me; I mean going on tour was scary. But it’s kind of cool to not feel comfortable.

Do you think there is one song that is representative of the whole album?

If I had to choose one, it would be “Purple Spine”. That one was when I really hit the moment of, “Ok, I’m really going to try and dedicate to something here.” The lyrical content as well really catches the vibe of the record.

Actually lyrics are the one thing that I’m pretty particular about. With this record, since I was trying to work through a bunch of shit, not so much, but I definitely sit there and try to hash out lyrics for a while. It’s funny because in the past when I’m working with people like Ty, we’re working in two different ways. He is really on the go and works a lot with sounds, and pronunciations, instead of specific words. He is a great lyricist, but we’re very different in that way. Yet it was funny, as I was doing this one on my own, there were certain things that he’s said in the past that all of the sudden made total sense to me.

Were there any specific recording techniques that you had wanted to experiment with and now finally had the opportunity to?

A lot of the songs are recorded very differently from each other. Some of the songs I recorded at an early time where I was still getting used to the recording process and also didn’t have certain equipment. But I think that’s what I’m excited for in the future is actually being able to sit down and go through things. A lot of this album was just getting things down, and not paying attention much to recording. I mean I wanted things to sound good of course, but a lot of these songs I didn’t go into expecting that they would end up on a record. I was just set up for streamlining the process, instead of really diving into sounds.

You and your cohorts work at a phenomenal pace, where does that energy come from?

It’s definitely out of necessity. I feel like all of us are always constantly writing and playing music; you’re bound to come up with ideas. But it’s weird, when you look at the timeline of how long a record takes to come out – it takes almost 6 months – in that time, someone could be writing whole other record. It’s in our blood to work that way. Everyone doesn’t want to sit still. We’re lucky to work with labels that are super chill and with who we can control our schedules. We have time to do what we want to do.

Did you ever think you’d have opportunity to release a record with so many of your music projects: Ty Segall Band, FUZZ, The Moonhearts?

I just feel lucky to be surrounded by the people that I am. When we got FUZZ together, I thought maybe we would come out with a 7-inch, but never what it’s amounted to now. I never thought about it much. It just always feel right. It would be boring otherwise.

Why do you think LA is so conducive to artists and musicians?

I think there is so much space, that everyone has room to breath. It’s weird, it’s such a densely populated city, but there is less of a feeling that everyone is living on top of each other. I feel like being in this Northeast area, I barely go on the freeway, I drive up and down Eagle Rock Blvd. and it feels like a small town, but it’s connected and is part of this bigger picture.

The fish tacos from Via Mar. I eat a lot of Pho, that’s my comfort food.

Still Life of Citrus and Slime, is out now via In The Red. 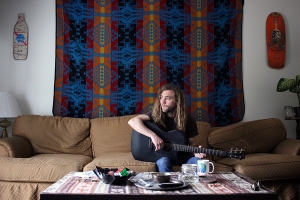 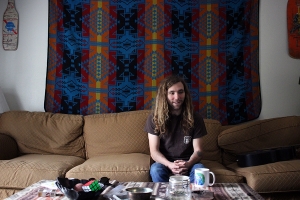 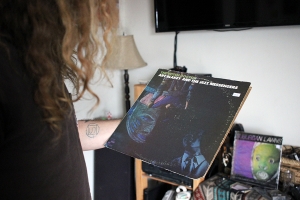 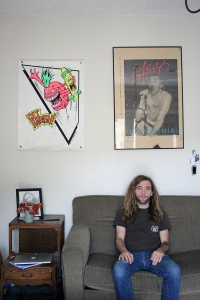 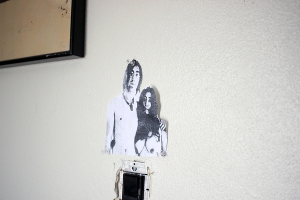 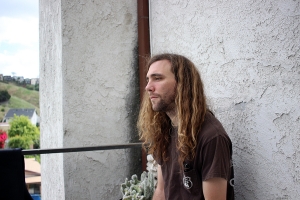