A few years ago artist, illustrator, and designer Chris Morrison, was working for a new start up company that did customizable printing in downtown Boston. He was hired to manage the retail store, print room, hire and train all staff, roll out the online store, set everything up, and then open up future stores in new locations. He got sick of doing all of this work to fulfill other people’s dreams, and decided to take a two-week vacation, during which he buried himself in work at home and solely worked on Hungry Ghost Press, the moniker under which he now runs his apparel and lifestyle print brand. In that two-week period he made a similar amount of money doing what he loved, and wasn’t going crazy working himself to the bone for the benefit of others. He promptly quit and decided to freelance and plug away at Hungry Ghost Press. Now the brand has scaled not only its production of goods—everything from shirts, beanies, and tote bags, to patches, prints, pins, and a range of home goods—but has also fostered a thriving digital following on social media.

Most recently, Chris has been using his sizable platform to take a stand against 45, the rampant corruption mitigated throughout our political parties, and the rise and acceptance of fascism. Chris’ new poster series “American Death” employs his’ notable design and screen printing prowesss, to create politically-charged visual statements that ridicule and mock what the current administration and corrupt political system stand for.

We talked with Chris about the inspiration behind the “American Death” poster series, the responsibility of an artist to examine, comment on, and participate in their social climate, and what he’d say to 45, if the two crossed paths.

Give us the rundown on the brand. What is it? Who is it for? Why was it started?

Hungry Ghost Press is pretty much just me, Chris Morrison. I do however have an unbelievable support system from my fiancé Jessy, who comes and helps vend at our pop ups, sits by me and talks while I heat press and screen shirts, packs orders and sits night by night on the couch drawing, answering emails, and editing designs. I really could not have done this without her. I also have a bunch of great creative friends who I constantly send files to, asking their opinion on color ways, phrasing, and basically run a bunch of my stuff by. I’ve been lucky to have a few people who have also helped print and organize stuff in exchange for teaching them how to print, or printing stuff for them. Hungry Ghost Press was originally started because I did just want to help other people get stuff out there. I started with zines and tapes because I had a bunch of crazy talented friends and I wanted to share my own work and theirs. It’s really grown from that to the lifestyle-ish apparel print brand that it is now. Hopefully some day when we have a larger influx of money we’ll be able to do a lot more zines and help other artists and people share some really cool things. Until then, we try and do collaborations and work with artists we like to share their work.

You never shy away from political commentary in your work. Can you speak a bit about the responsibility of an artist to examine, comment on, and participate in their social climate?

I think its really hard for anyone, right now, not to do something that has some political or social commentary to it. The world is in a really tough place with the rise and acceptance of fascism, production of nuclear weapons, rampant corruption through political parties. and general tension between countries. It’s important for anyone to take a stand on what they believe in, or at the very least, on what they oppose. For me, I believe the best way to take a stand against these peoples and ideas is to create pieces that ridicule and mock what they stand for and what they can lead to. I do not believe that the responsibility is in artists alone. I feel like we all as humans have a responsibility to each other and ourselves to do something that says we do not condone the way things are going. I do believe that people like artists, who may have a larger and more influential reach use it in a positive way, to reflect the world that they see and the one that they wish to participate in. I think it’s pretty cheesy to drop in quotes when talking about anything, especially when it’s art or politics, but I do think about this poster my mom gave me when I was little. It was a painting and had a Brecht quote under it; it hung on my wall next to my bed and I think it sums up a lot of my ideas on art’s role in society, “Art is not a mirror held up to reality, but a hammer with which to shape it.” 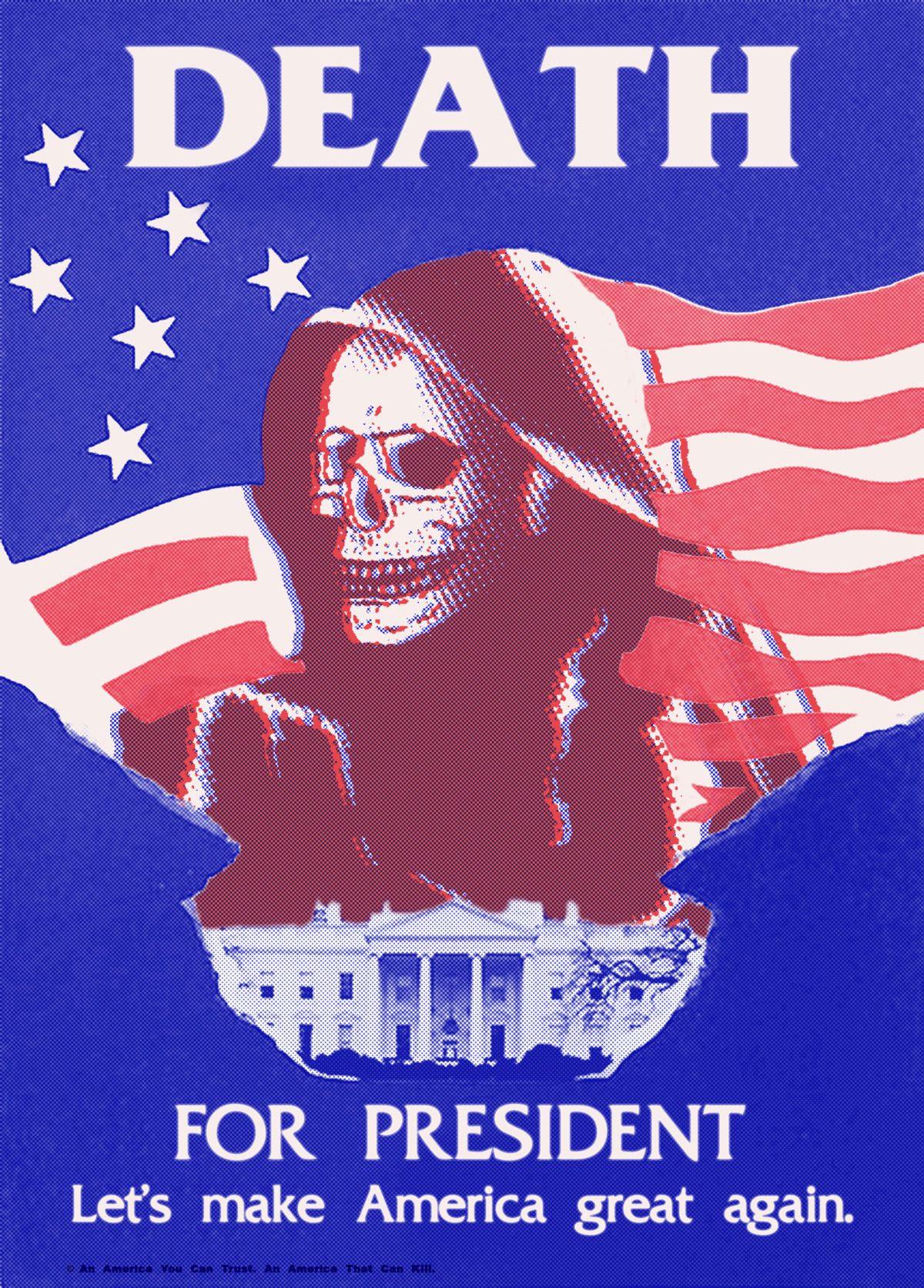 How did you start making posters like “It’s a Grim Day & Death Has a New Face ” and “The Destroyer”?

The “American Death” poster series started out with the first poster self titled as “American Death”. I had been reading a lot about Reagan and the Republican political party of that time; there were so many articles coming out about the similarities between Nixon’s presidency and campaign, and Trump’s outright copying of his Republican predecessor’s tactics. It got me so upset. I felt like America had been duped before, scared because of lies and cornered into a presidency that led to a society and era that did more harm than good, and I felt like we were just following those steps. I saw and still see Trump as a new wave of American Death. It made me sad and angry. I wanted to make these larger than life, oversized posters that showed Trump as I saw him.

There’s currently 4 posters and 1 shirt available in that series with a few more prints and pins coming. “The Warlord” print was inspired and created after the first remarks Trump made about the Muslim travel ban. “The Destroyer” print was created after several discussions with my friend Matt about Trump’s presidency and the general climate of the US. “The American Death” print is available as a poster and as a shirt. We teamed up with the amazing folks over at Flower Chainz in San Diego, California to make it available in a shirt. We’ve also worked with them on other designs like the “End Mass Incarceration” shirt, where 25% of all sales goes to PARC, the Prison Activist Resource Center.

Have you found it inevitable that certain work you make is targeted specifically at 45?

Yeah, I think it’s really hard because so much of my time is spent thinking about him, the society he is trying to and has created; he’s kind of always on my mind. I have a hard time sleeping at night so when I wake up in the middle of the night or am just laying in bed I look at my phone (I know, not the best thing to do), and Google search “trump”. I read headlines and click on articles and get mad. There’s so many horrible things, actual things he is doing, but then also just words and ideas that he’s spreading. It’s just gotten to the point where I’m surprised by what I find triggering anymore. He’s done and said so many terrible things that he’s shaped my reactions. I’m always looking for the next worst thing he’s done. It’s a part of myself I don’t particularly like or want to indulge, but find myself doing it more and more. After a while, these feelings compile and usually lead to me making something about it. 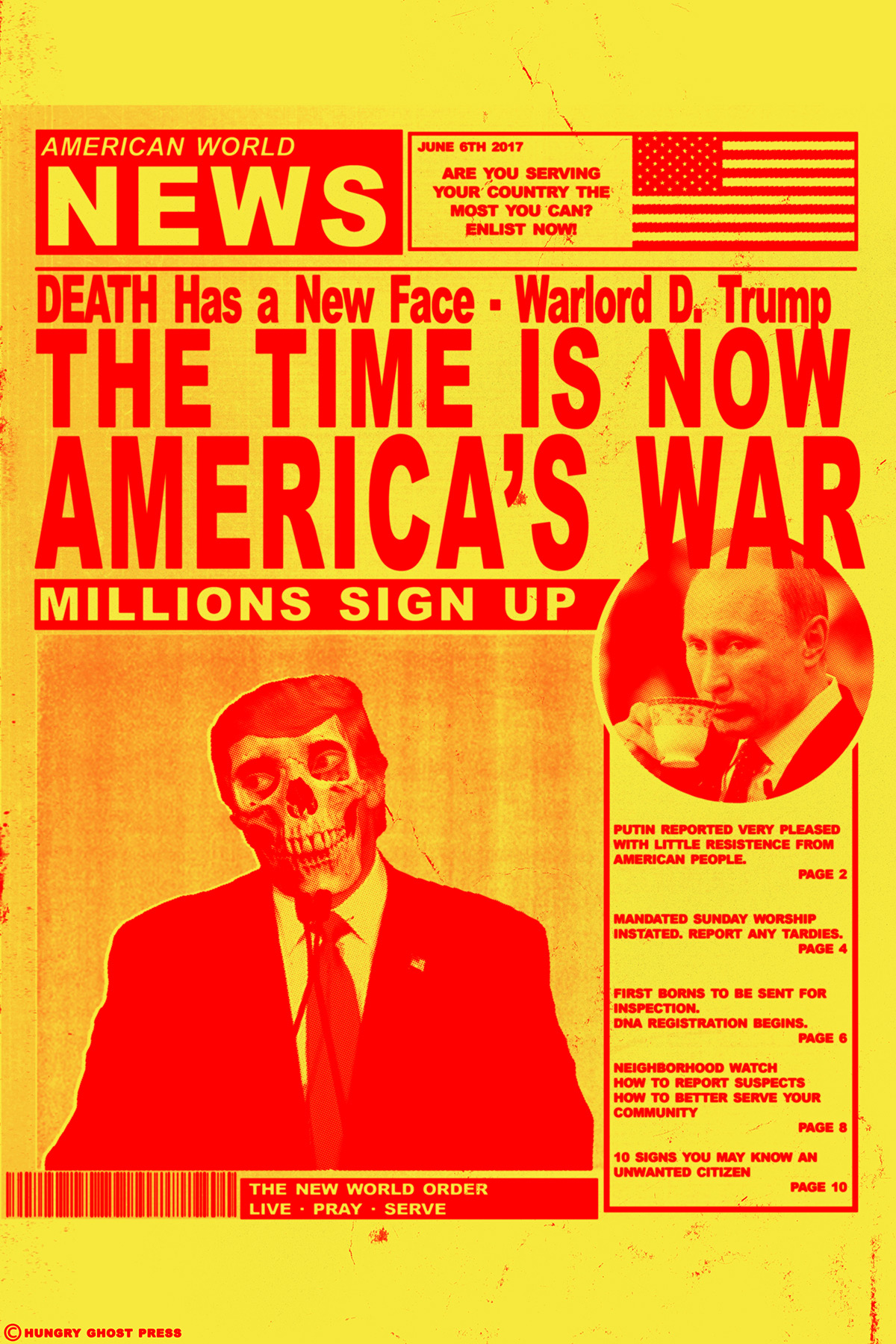 What has the reception been to the “American Death” poster series?

We’ve received really only positive feedback about the pieces in the collection. “The American Death print” was crazy popular, we had a lot of people reposting and sharing the image on Facebook, Tumblr and Instagram, which I always think is a killer compliment and an awesome way to spread the message and ideas that we’re all about! We showed the print in a group show and market place pop-up at the Extension Gallery in Boston, Mass. at Orchard Skateshop and we sold out of them the first night. I think most people are just fed up with Trump, his followers and crew of cronies in the White House.

If you could say one to thing to 45, what would it be? Not like he would listen anyway, but still.

I thought about this a lot and I’m torn between the idea of not wanting to acknowledge or say anything to him at all and also to ask him how dare he? How dare he take sides and decide to be a president who thinks more about his own self and crew of billionaire vandals than the general wealth and safety of our country and world. To go on a rant and ask him all the things that I am horribly confused and sickened by, the actions and words he has and have not said; but to honestly believe that no matter what I or anyone else says he really doesn’t care. That he is a horrible and inexcusable person who has no moral compass or compassionate thought for anyone else but himself.

I don’t know. I’m really not sure if I would say anything.

For more from Hungry Ghost Press follow them on Instagram: @hungryghostpress. Head to Flower Chainz to buy the “American Death” and “End Mass Incarceration” shirts. 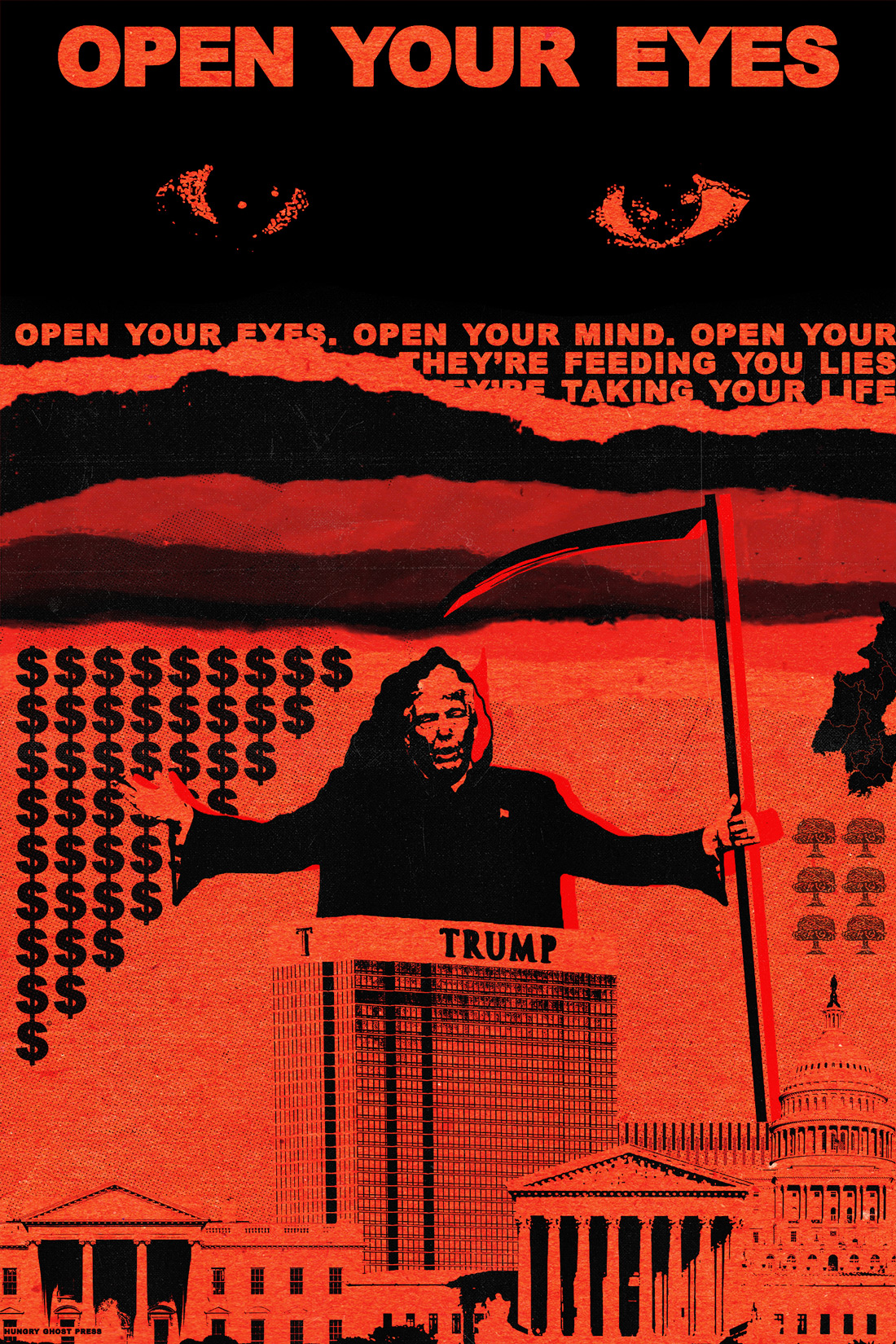 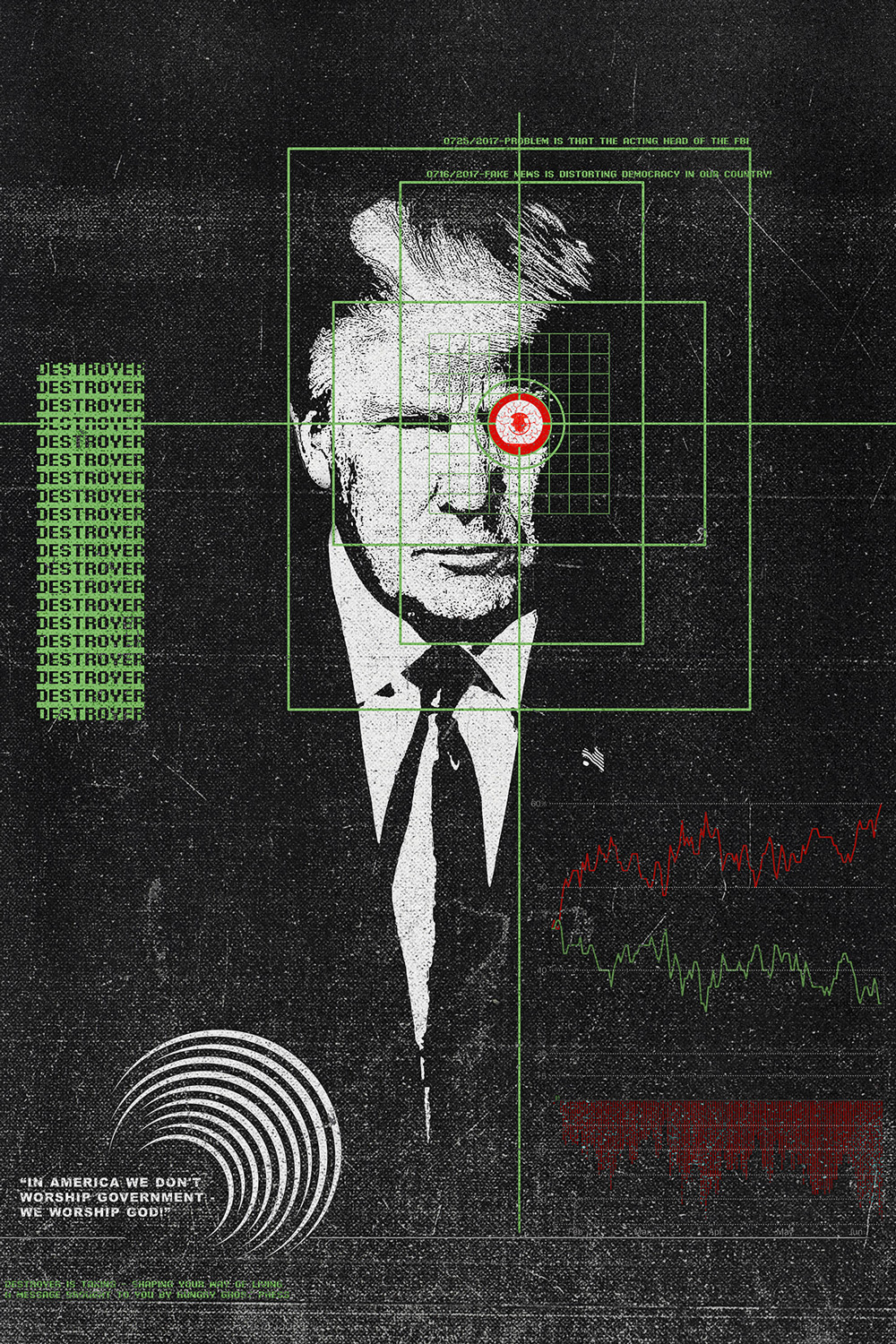