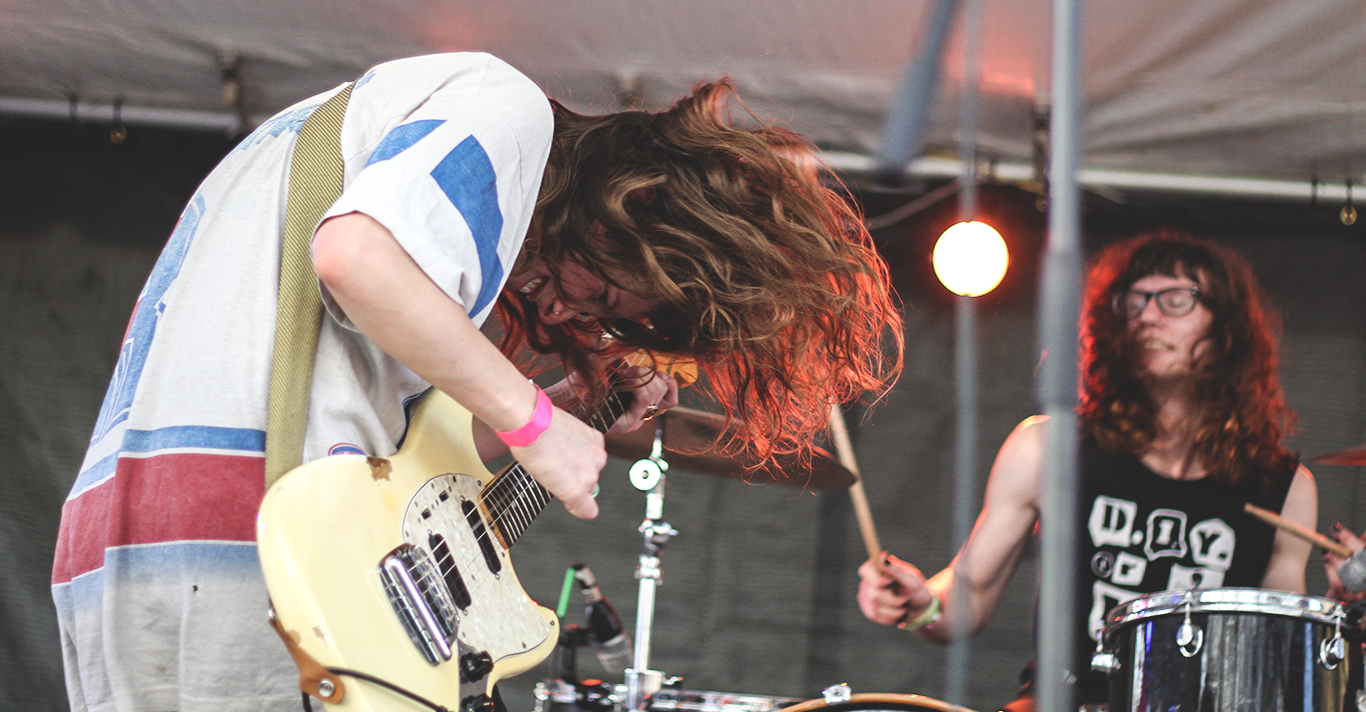 In this day and age, band after band, genre after genre, are hitting the eardrums of the ever-eager music gormandizers around the world. To fill that coveted spot of enamel pin on the vest of a fan is a tall order, but to be able to make that imprint in the musical domain in a mere two years is even taller. Enter Gymshorts—one of those few who have made a name for themselves in a short but hard-earned timestamp.

The Providence, Rhode Island based band of four has been producing raw punk rock, trouncing stages and working their way beyond the tiny state by the ocean. Sarah Greenwell lays down lead vocals, delivering the foundation of the powerful garage-rock squad, mirrored with thrashing force by guitarist Devin Demers, bassist Michael Younker and drummer Chris Faulkner. With long hair, long t-shirts and long, loud sets, the foursome evokes sore necks and feverish moshing with distinct riffs and an unrelenting energy felt by the greats.

With a calendar of 30+ show dates (and 30+ chances to score some homemade Gymshorts merch) there will be no scarcity of thrashing in 2015. Recently signed with our friends at Manimal Vinyl, the hardcore saga continues in their developed-goes-primitive punk rock style. As the group embarks on their largest tour, to date, the group took the time to talk to Amadeus about their DIY recording process, a natural writing style and flying cars.

Let’s start from the beginning, how did Gymshorts come to be? And did you imagine this much recognition/success in such a short amount of time?

It started kind of as a joke just from the name Gymshorts. Sarah was like we gotta start a band named Gymshorts, and I was like okay cool. That was kind of that. We wanted to write punk songs for kids and tour elementary schools, but it kind of just evolved into something more real.

What influenced the group to start playing this type of music? This style of genre has been becoming more popular, but with female vocals it stands out from other groups.

We are influenced by a lot of people I guess. We just write whatever comes naturally and then work out the details after, but we try not to think too much about it too much!

‘No Backsies,’ recorded in 2014, was done completely on your own. How does Gymshorts deal with the recording process? Do you think you will continue to produce albums on your own? Do you think more and more bands are depending on DIY?

Our roommate, Jared Mann, recorded the album and it was fun, but we hate recording so we did our best. We recorded it live which we will probably do the next time too and ya know, you don’t need a million dollars to spend on studio hours and mixing and mastering and all that to be able to get your point across musically.

I saw your guys live show last summer in Boston. Your stage presence felt infectious in the crowd and I know everyone could feel the energy coming from you guys. How do you like live shows vs. the album recording process? Do you think your music is best served live?

We’re definitely a live band. I think that’s why we’ve been spending more time on the road than in the studio for sure.

Talk to me about touring. It must take a heavy toll on group to be on a two months long tour with shows every day, but you guys are still relatively fresh. Has the road begun to take a toll on you guys yet? What is your biggest show you are looking forward to playing?

Tour is awesome! Work sucks. We look forward to playing every show because every show is different. Fuck the system eat more candy!!!

What does the future look like for Gymshorts? Have you been writing or experimenting with new songs for an upcoming album?

The future for Gymshorts? Flying cars, robot jet packs and teleportation for sure. Nah, but ya we’ve been playing a few new songs on this tour and when we get back this summer we will probably spend some time recording.

Who are a few bands you have found yourselves listening to recently? Any band crushes?

Michael has made some really cool hip-hop mixes that we’ve been hitting on pretty hard lately. As for band crushes, D’Angelo’s new album is pretty sexy.

For more from Gymshorts check out their bandcamp.