Julia Wright’s weaving shines. Materials themselves each have their own unique power, but it takes real dedication to be able to bring them out. Under such dedication, the material takes on a life of its own. Weaving is easily misunderstood today because the world doesn’t work the way it used to. The loom is a technological dinosaur in modern culture, so watching Julia work on the loom is both a history lesson in itself and also strangely postmodern. To rework the art of weaving from its foundation is to be highly aware of its history. In this way, her work engages with the generations of women before her who have woven. It’s also clear she knows the machine intimately.

I’ve lived with Julia for almost a year now, and I’ve seen firsthand the devotion that weaving demands. Every detail is considered, and every free minute is used to make. Craftsmanship is supposedly lost, but Julia succeeds at reviving it. 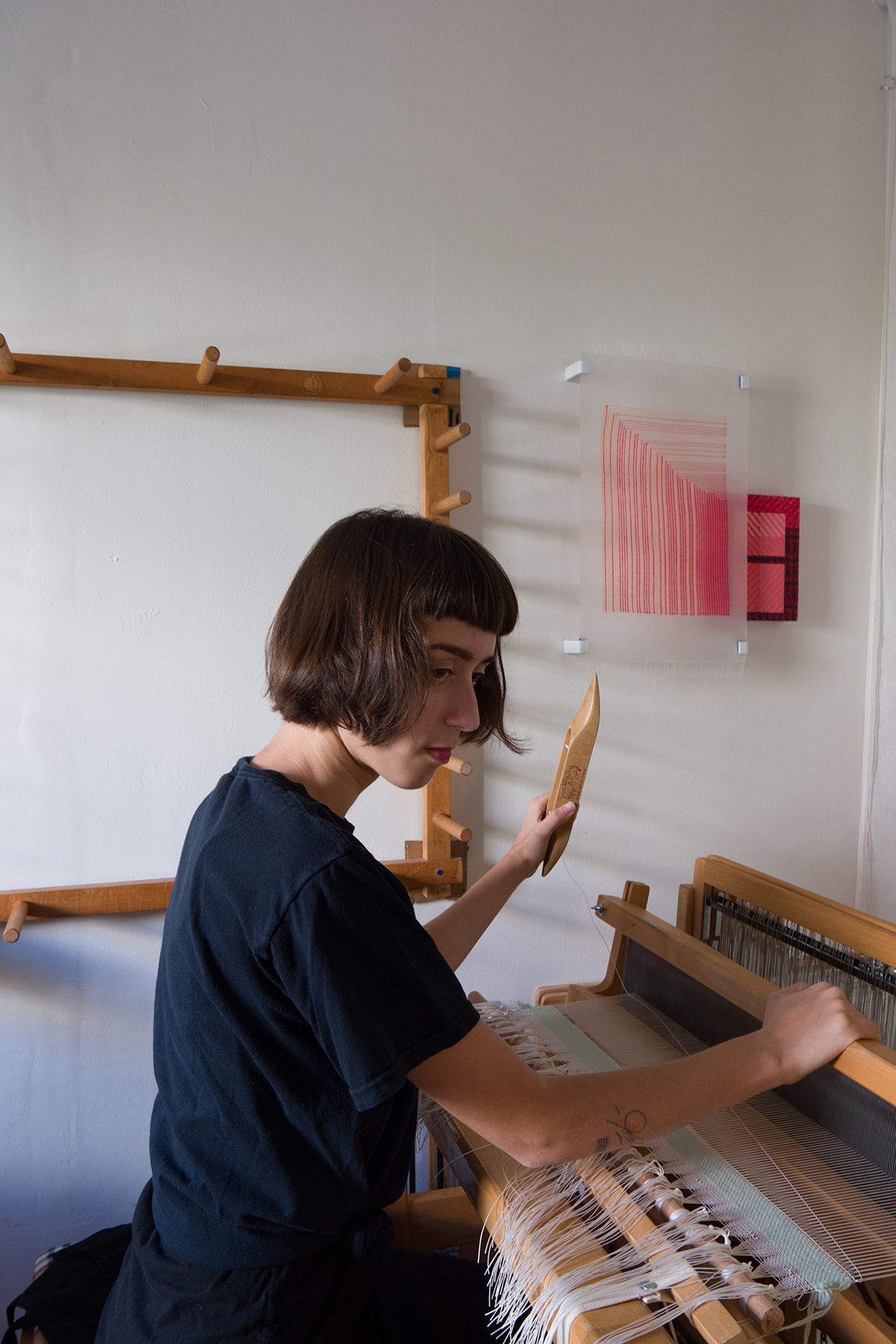 How did you begin weaving and experimenting with textiles?

When I was a really little kid, my mom found out about wool felting. She started with needle felting and then went to wool roving. Wool roving is wool before its made into yarn and after it’s been cleaned but before it’s been spun into yarn. We would go to the Sheep & Wool festival in Maryland when I was a kid, and I also found out that my great great grandparents met at a weaving mill in Philadelphia.  So I was surrounded by it my entire life. However, I always thought I wanted to do something different. My mom was the president of the North Eastern Felt Maker’s Guild, which is basically a bunch of older ladies who like wool, felting, knitting, and fibers. It’s a very specific audience. That’s a very interesting thing about textiles; there are young people and then there are older ladies. All the ladies were super excited that I was going to RISD. Most of them are making stuff that’s really crafty, but it’s a hard thing to criticize because a lot of them never had the opportunity to do what I’m doing. It wasn’t as much of an option to go to art school for them.  I really never thought anything of this, until the moment I realized I wanted to do textiles too. I realized it could be something different than what I had thought.

I went to a public high school outside Philly. University of the Arts in Philly sponsors local public high schools, and every semester they give free scholarships to those art departments, but no one in my school wanted to do it except me. So for four semesters, my mom would drop me at the train station to go into center city and do this program. I wanted to do fashion, so I took a wearable art class, which ended up being more about dying and working with materials. Since my mom did it my whole life, I had always known about textiles. But, it was always in a crafty orientation so I never thought it was actually something I could pursue seriously in my life.

I had a teacher who worked at this place called Dyenamics where she dyed things like Donna Karen’s 1999 collection. Her classroom was full of looms — it was the first time I had seen that many looms. I remember walking to my job at the library with my friend and talking about this thing called textiles, which were behind the scenes of fashion. That’s when I started to realize the thing I had been doing my whole life was actually a viable career. I knew I wanted to be an artist but didn’t know the path. I took a fibers class, where I made a little loom and was weaving with like puzzle pieces — it was weird. The teacher also took us to Sheila Hicks retrospective at the Institute of Contemporary Art in West Philly. Sheila Hicks was fucking there and she gave us all hugs. I cried because here was this woman who built her entire career off textiles in high art and had been doing it for over fifty years. In high school, we had to do a career shadow day, and I picked that professor who taught me how to dye, and she said something really touching to me. She said, “I wish I could just pluck you out of high school and put you in front of the loom right now.” She taught me how to do double weave pick-up that day, which is actually a very complex weave structure. 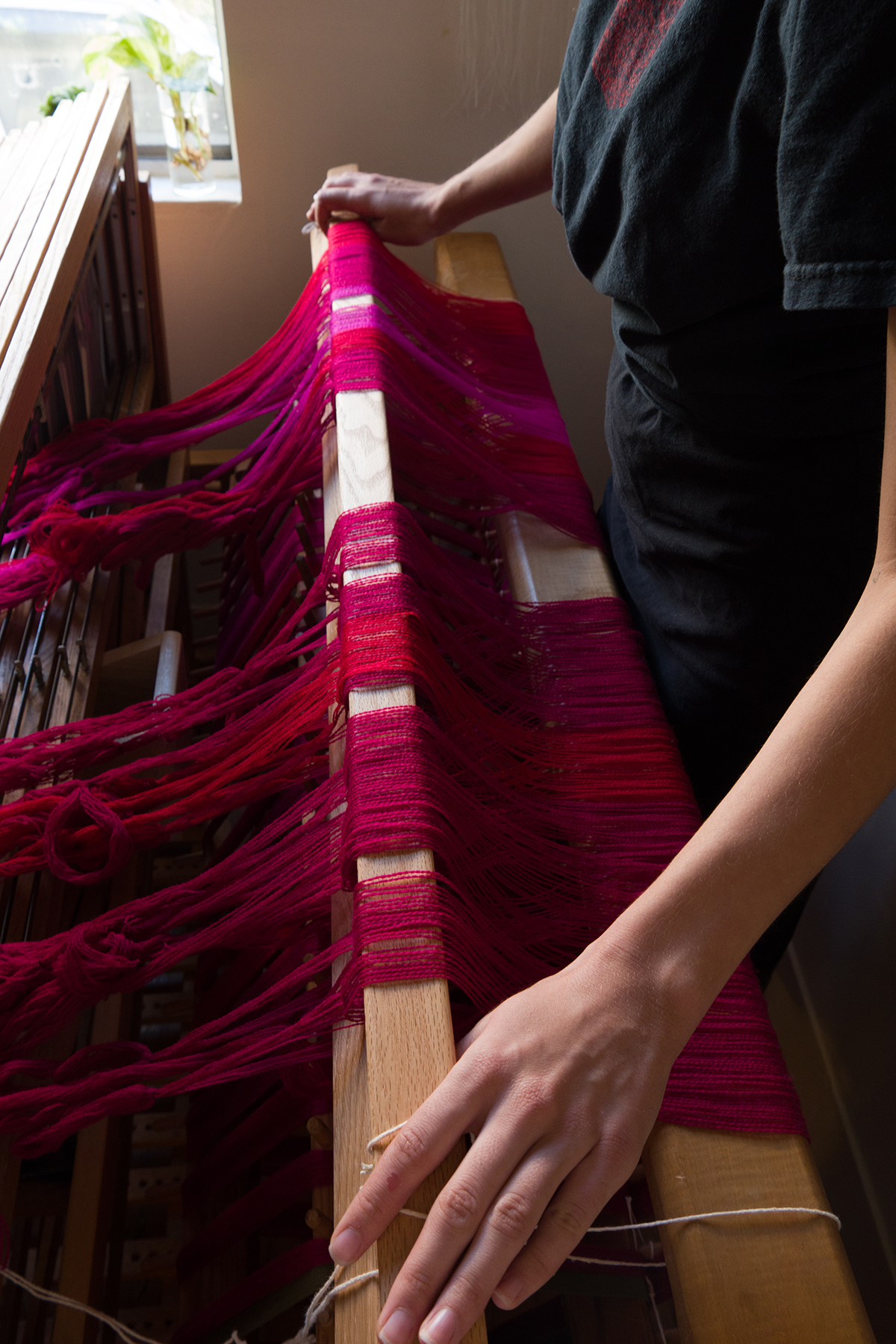 That’s really interesting that you started off not wanting to do textiles and then it became such a part of your identity.

Those classes in high school really helped to open up my mind to its possibilities. I applied to RISD because it’s one of the best textile programs in the country, and weaving really got to me because it’s such a process. RISD had the option of fast track and slow track, and I did slow track because it meant more weaving. I only did that because someone told me that I would get more out of my education that way, which is super true. It all started to click when I was sitting at my loom at school and thinking about how I am a part of history by sitting here. There’s a long line of women who sat in front of a loom and have done this thing that is so process oriented and technical and mathematical and they have never gotten the credit for those things. That’s when it started to feel really fun. When I tapped into the creativity in the box that is weaving. Being an artist is about setting up constraints for yourself, and weaving is mine. The structure of weaving is a grid system. It’s also about calculations. If I have one thread off, then the craftsmanship of my work is lessened. It’s that calculation of whether it’s worth it to spend the next five hours undoing the past fifteen hours of work and redoing it all. Usually, it is, because, in the end, you’ll have a better piece. Then you just train yourself to be exact so you don’t have to do that because you know the pain of it.

So what part of the process do you enjoy?

I always liked math a lot in terms of how it can be exacting, and I have always loved art as well. Weaving is an interesting in between. The way I weave is really exact and mathematical, but not everyone weaves this way. The part I find interesting is creating a mathematical equation that can lead to something that is not normally achieved. This is why I like using double weave and double weave pick up structures because you’re making something so technical that its not obvious how the construction lead to the outcome. 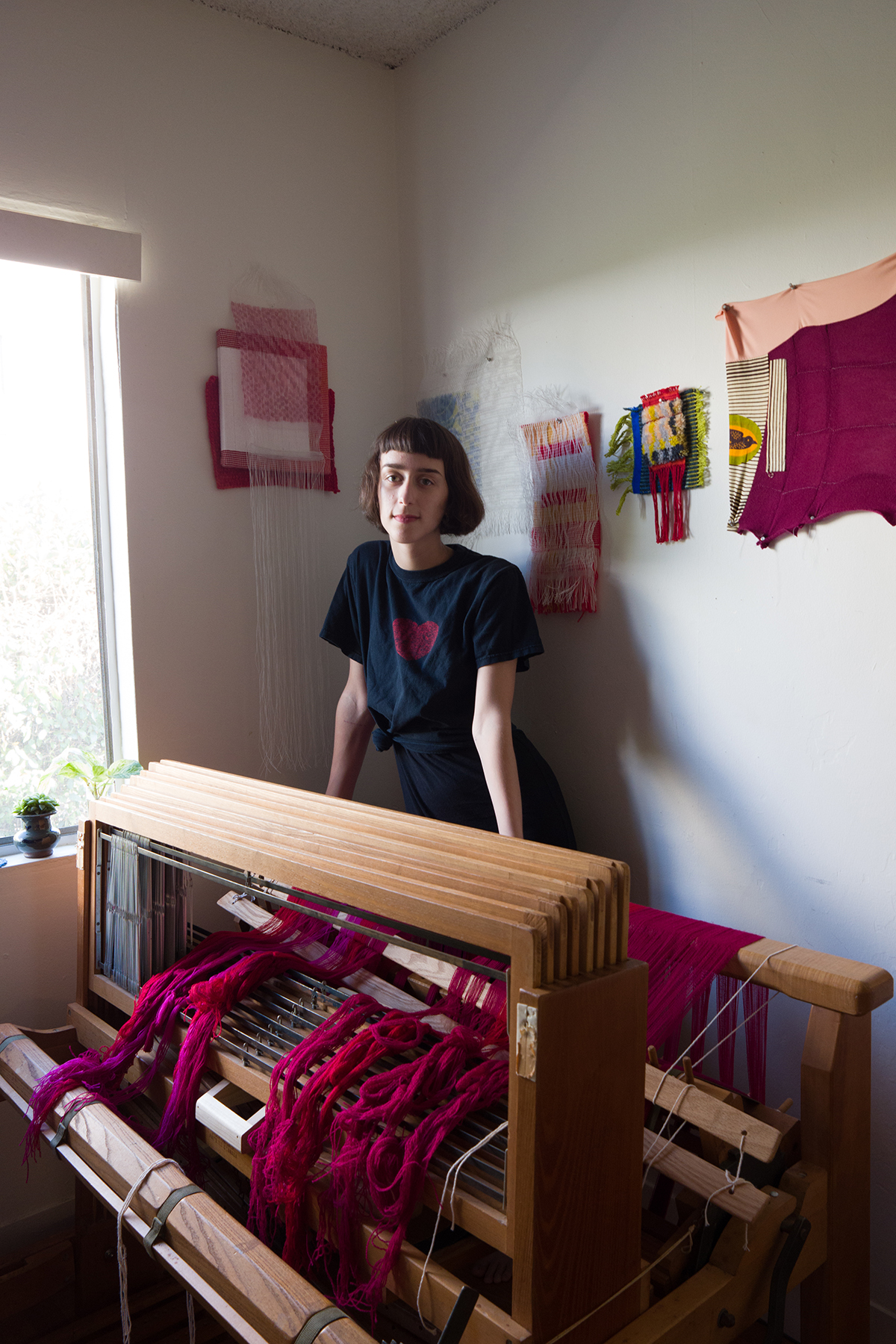 Can you explain double weave?

Imagine you’re weaving two different layers of fabric at the same time. If you’re doing regular block double weave, you can say, “I want to have this square of the bottom fabric switch spots with the top fabric, but only in this one spot.” I try my best to fuck with it so you can’t really tell the exact method of how the structure works

It honestly scrambles my brain.

That’s what I like! That’s what I’m into. Using the structure of the loom itself to fuck with the structure of the loom itself. It has led me to think about how our physical and emotional infrastructure reflects the fundamental human need to organize the things and spaces around us. I love how threads can be organized and arranged, and how you can use that organization to create a physical cloth, a three-dimensional material that has been embedded into the history of humanity. Kind of random but there are these service roads in the desert above Angeles National Forest that inlay this set of grids into the earth but there are no houses, no buildings, nothing. Just grids in the desert. To me it makes me think of taking something so wild, so inhuman of a space and organizing it somehow to make sense to the mind, although it never really makes sense in the end. It’s just what we want to tell ourselves as humans — this makes sense, this doesn’t make sense. What does it mean to turn chaos into order? I struggle with my own work in that way because I’m doing the same thing- taking a mess of threads and putting them into some sense of order- but there is always an element that remains incapable of being` wrangled into making sense. 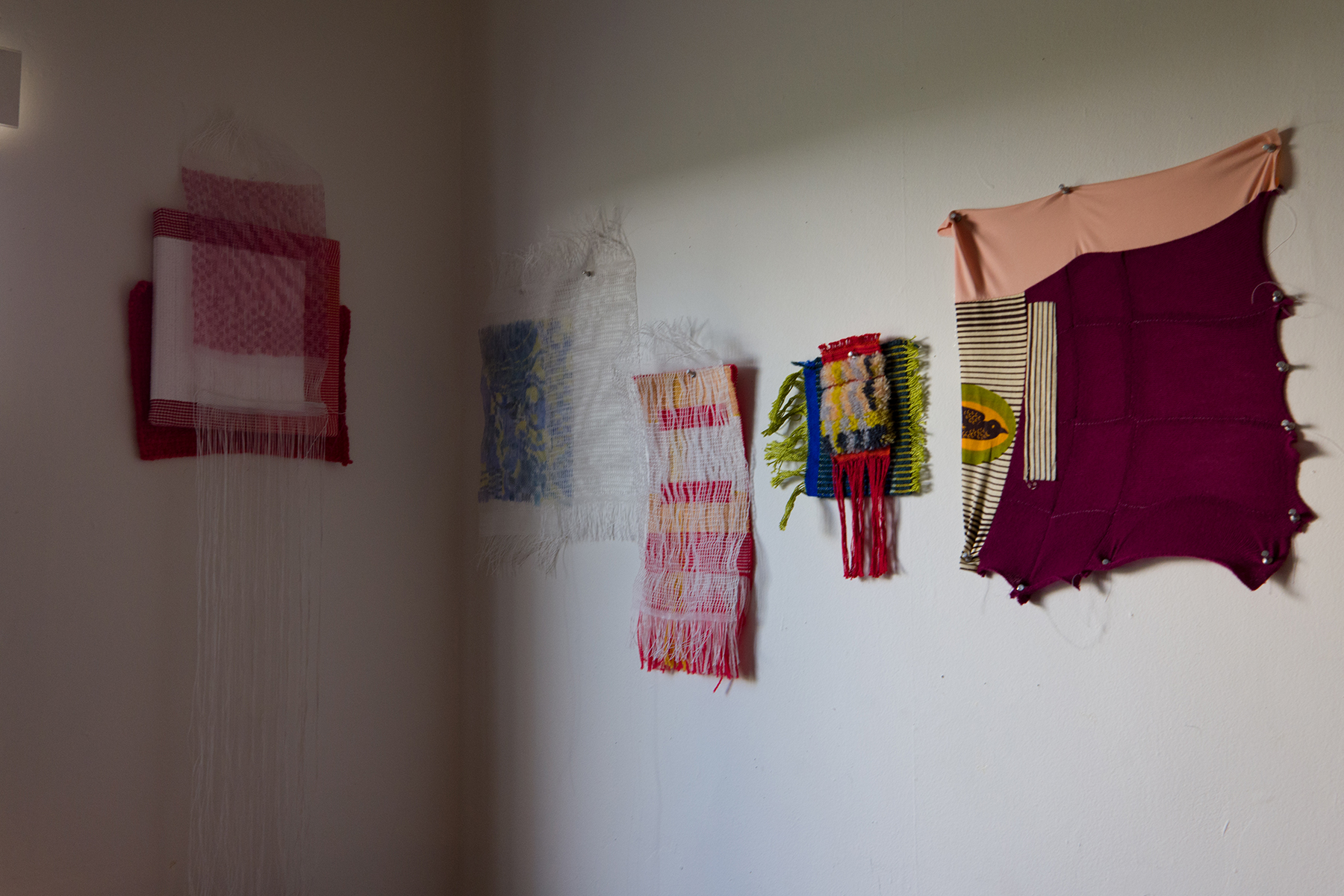 Is the idea of chaos vs order in terms of man and nature something you’re thinking about in your work right now?

Yes. I’m weaving a meditation mat on my loom right now. I’m going to use it on a hiking trip. I was trying to think about the calmest place I could be, and I thought of a square. Even when I’m in chaos I want to organize my surroundings.

Can you go back to what you were saying about how humans organize our emotions? What do you mean by emotional infrastructure? I think about emotions in terms of my work in general, and there is definitely an infrastructure and I think it’s tied to what we’ve experienced as much as it is tied to natural reactions. On a day to day basis, you have a set of ways of reacting to things that you already know how to do, so that you don’t actually have to emote. Otherwise, it takes a lot in everyday life.

Yeah, we build calculations and walls around ourselves physically and mentally to feel comfortable. And the way we build physical spaces around us to feel comfortable intersects with emotional well-being or feelings of disarray. In college, I made a lot of raw emotional work, including one piece of collaged imagery and jacquard weaving. I was going through a lot with divorce and death and started feeling the need to build myself up to remain strong and get to the other side of this. It might have been because I wanted to not deal with the pain but I also think building that strength allows me to not dwell too much on those things and move on with life and try to stay positive about the future. 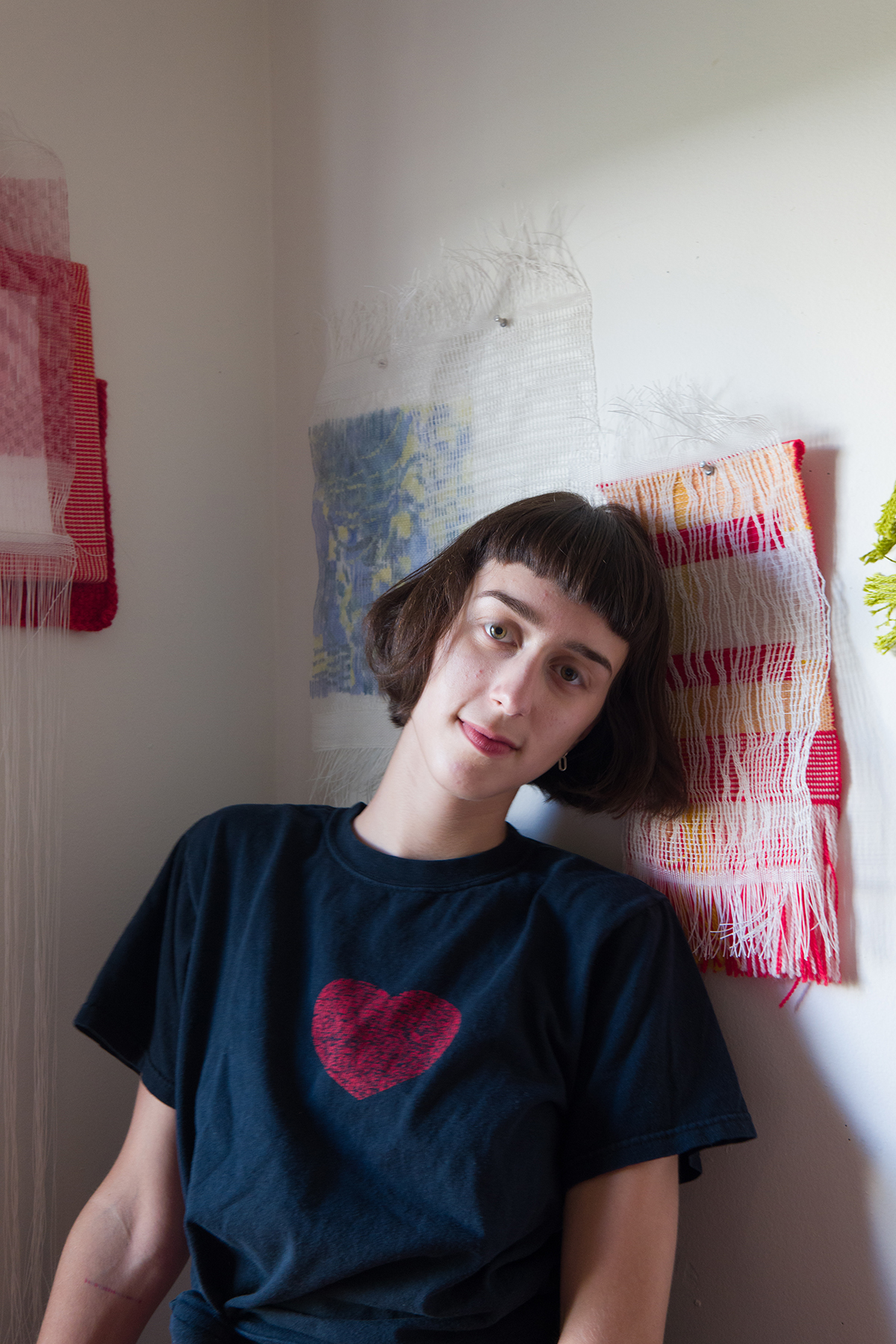 That’s cool because I think work doesn’t have to come out of pain.

I struggle with this because I don’t know if, as an artist, I should be focused on having a social message, or communicating something about our time. I don’t know if I feel like I need to do that.

It’s tricky because work can come across as shallow; I work with grids and repetition and those things can become just about what they are. But, I’m really interested in the technology of the thing, and the mathematical construction of it. I want to play visually with material.

Not everyone has to be political. I don’t feel like I have to box myself in.