Endless Incentive: Jemima Kirke Talks Wide-Eyed Innocence and Allowing Everything to Inspire Something

This feature on Jemima was originally published in Issue 19, available here.

It’s cold in Brooklyn, and she shows up in a bundle of shearling, a wind-whipped rosiness outlines her warm smile. There’s an involuntary elegance about artist Jemima Kirke—in her speech, in her movements—that breathes midmorning Sunday: unhurried and fluid and assured and stoic. I want to accredit it to her being a mother, but I don’t think that’s fair to her; to being a painter, too, but that’s not entirely fair, either.

In no exclusive or fixed order, Kirke is an artist, a collector, a mother, a lover, a sister, a friend, and a muse. “I never know anymore who has a preconceived notion of who I am and who doesn’t. I’m an artist. I would normally say a painter, but I have other ideas lately,” she tells me. Acting falls in there on occasion, as does directing, but painting, especially people, is what she does.

This winter, Brooklyn’s Sargent’s Daughters Gallery hosted her most recent series of paintings in a show she called “Scamp.” The subjects are all children, an idea Kirke shelved for years until finally, thankfully, working up the courage to give life to her pipe dream. “For some reason it was inaccessible, and I don’t know why. No, I do know why—it’s because, in my head, it was so perfect that I didn’t want to do it because then it wouldn’t be. Having a kid in front of me is such a gift—it’s such a juicy opportunity, and I didn’t want to waste that, so it’s nerve-racking, because it’s like, this could be so, so good.” And they are. In broad strokes and warm colors, Kirke captures the wide-eyed aplomb the world has yet to eat away at. With their tiny hands and telling shoulders, children sit or stand in whichever pose Kirke was able to catch, unwittingly trusting and indifferent to the woman in front of them. “Each time I draw a kid it’s impulsive—it has to be. Their cheeks and their stupid haircuts—everything.” 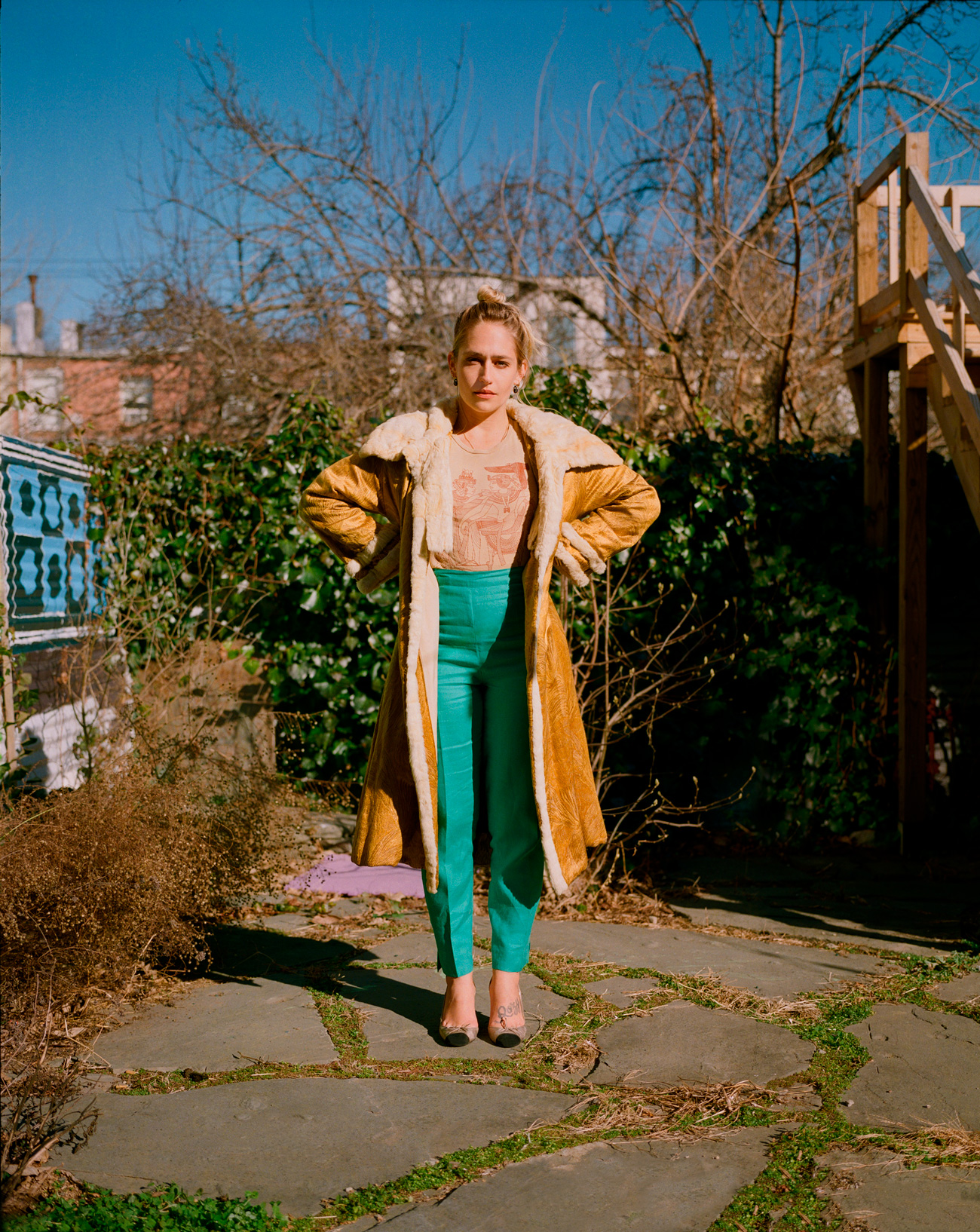 These kids, ingenuous and unabashed, each wear a vintage costume, something they chose off of Kirke’s studio wall and which felt a certain way to them. Kirke is a collector (more on this later), and this collection of petite wearables was really important to the series. Beautiful circus costumes and 1950s Ben Cooper Halloween costumes with the character names and faces emblazoned on the chests. One little girl wears a Tweety Bird dress, and I’m overcome with nostalgia and some sadness.

Propped up by these conscious costumes are their singular faces, and it’s a nod to that innocence and the undeveloped armor they have yet to need or understand that “Scamp” realizes: “when we’re out in the world we all have this layer of costume that we put on in order to have some buffer between us and everything else, and that’s the thing that’s so heartbreaking about kids—that they don’t have that and you’re seeing them develop that.”

Kirke’s costume is a macramé tank top over a black long-sleeved shirt trailed by more black from the waist down. After graduating from RISD, Kirke bopped around Florida and found herself working at an art supply store. “I hadn’t painted in months. This guy came in to buy paint one day, and we got to talking. He said, listen: I have this studio if you ever want to share the space I can set you up in the corner and you can paint.” After some weeks of internal debate, she took him up on it: “I’ve got to do something, I have to make something,” she reckoned. And so she painted. She painted him, and as time and word went on, just about everyone else in the small Florida town sat down for her, and one by one, she painted them, too. “And that’s sort of where it started, out of necessity, really. Since then I never stopped. I love the idea that you can paint a face and it’s not a photo. That’s what sticks with me—this is not a photograph. I’m just using this person to make something else; this isn’t really them, anyway, so I have this freedom to sort of use what I want from them or not.” 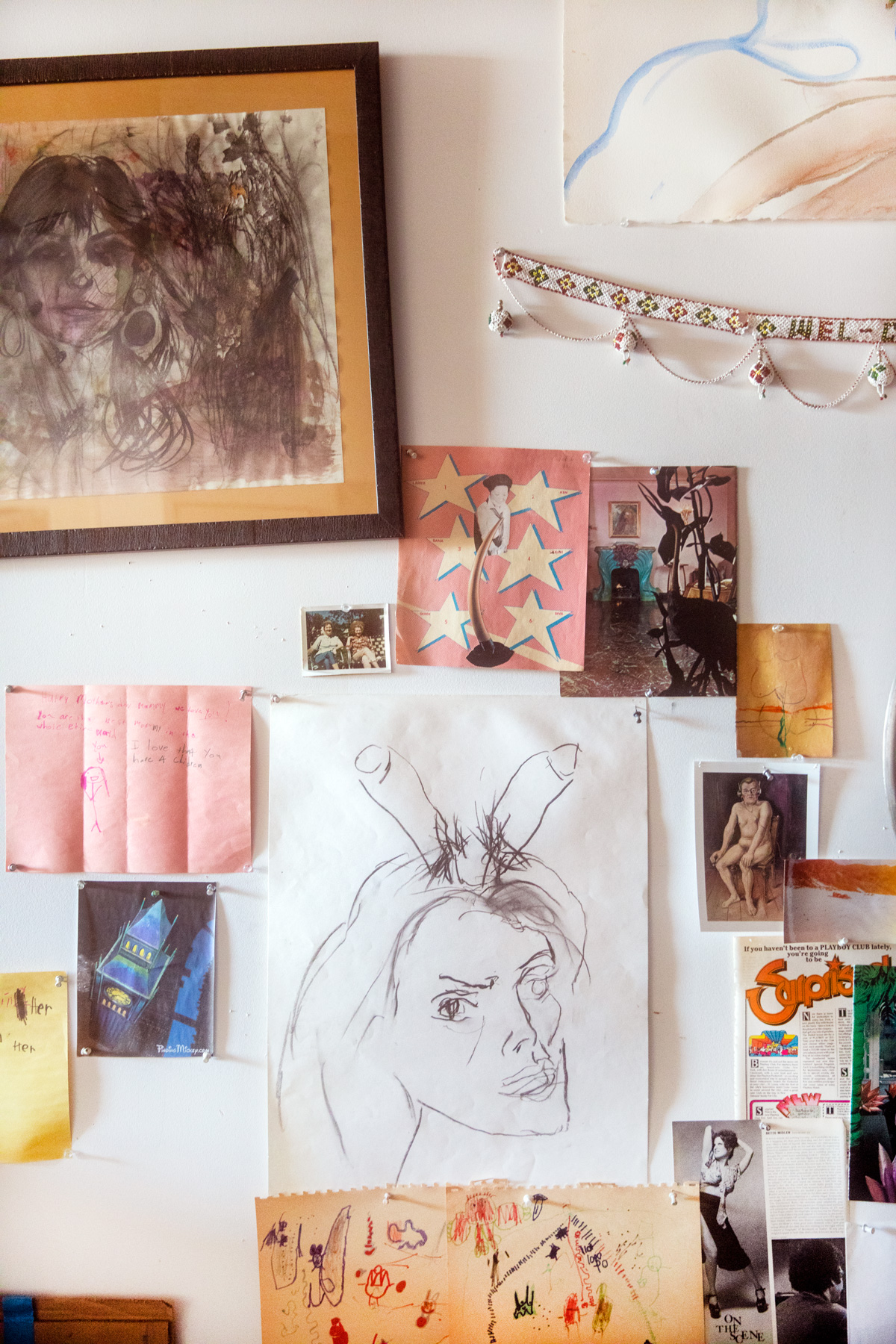 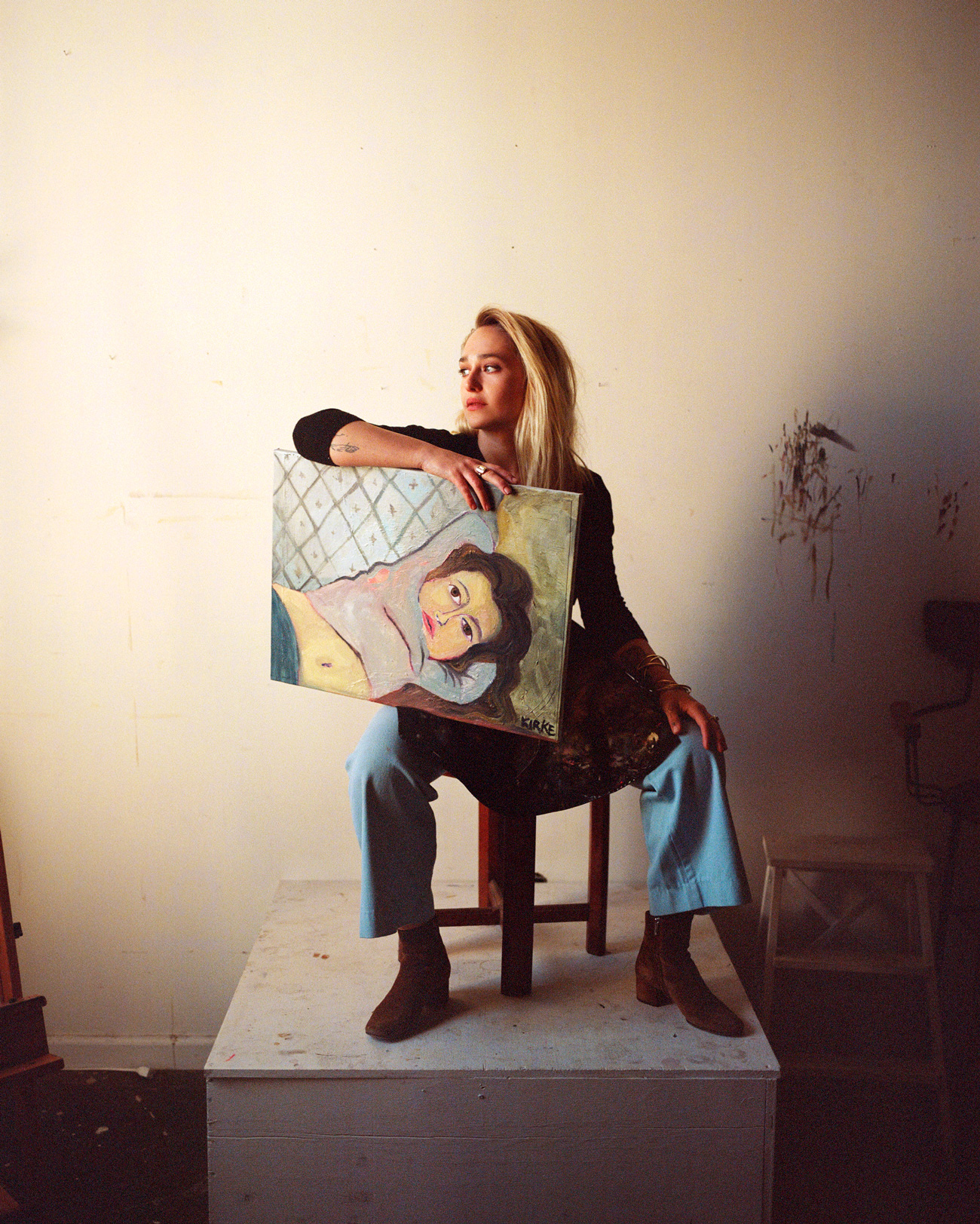 I ask her if it’s always been painting, and she disagrees with herself: “yes—well, no.” She started with collaging and the realization that just about anything can be layered and meditated on. So she collected: fabrics, cowhide, magazines, newspapers—anything that could somehow be stuck to a wall or paper, really. “It goes along with the compulsive collector thing,” she says.

Yes, Kirke is a collector—the best of us are. “If you look at my studio, it looks like I’m eighty years old. I just have so much shit.” And at the moment, it’s baby things. (“Like, tiny things?” “No. Like, things for babies.”) Baby plates, baby toys, nursery decor—she collects it all. She tells me about a set of baby napkin rings, fancy, and silver, presumably for a restaurant or hotel. They have nursery rhymes engraved and the look on Kirke’s face tells me just how dear to her these findings are. “They’re just amazing. In fact, I have so much of that stuff that I was thinking I’d open up a shop. An antique baby supplies shop. I’m not really a shopkeeper—that’s not my dream, but it is my dream to take all of that stuff and set it up in a way that’s pleasing to me, and then make it so expensive that no one can buy it.” Relatively new for her, though, is directing. Like a component of Kirke’s makeup, cinema accompanies her every day, inspiring and surprising in its narration of life. (The Turner Classic Movies channel is ever-on at her home. To have her morning coffee with Mickey Rooney is just so nice, she tells me.) To date, Kirke has directed five music videos, including “Mama” for her sister Lola Kirke, and “Marlon Brando” for her boyfriend, Alex Cameron, the stark contrast of which speaks to her gaze. “I watch a lot of movies, and when I hear songs I often have visuals to them.” After Kirke heard her sister’s EP, this one song stuck in her head as a reel of a woman working out. So she ran with it, found a cameraperson and made a beautiful thing. “Then I showed my sister, and I was like, hey, I did this thing to your song, and she loved it and put it out as a music video.” “Marlon Brando” is part short film part music video—a satirical mockumentary that flips the cameras on a music video director. It’s funny and clever and nearly 18 minutes long. “It’s new to me, but I definitely would like to try more with sound. To me, [music videos] have no sound.” 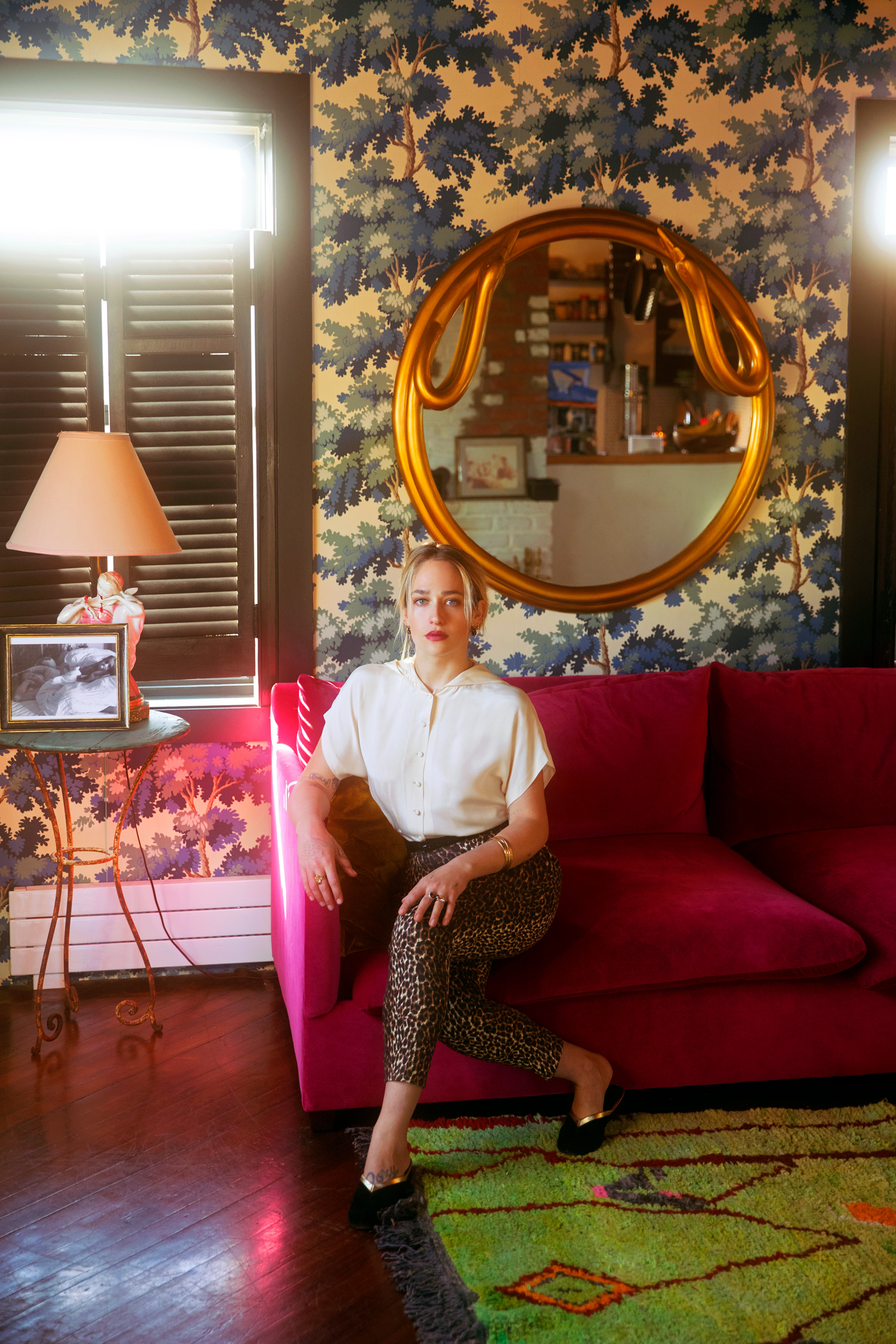 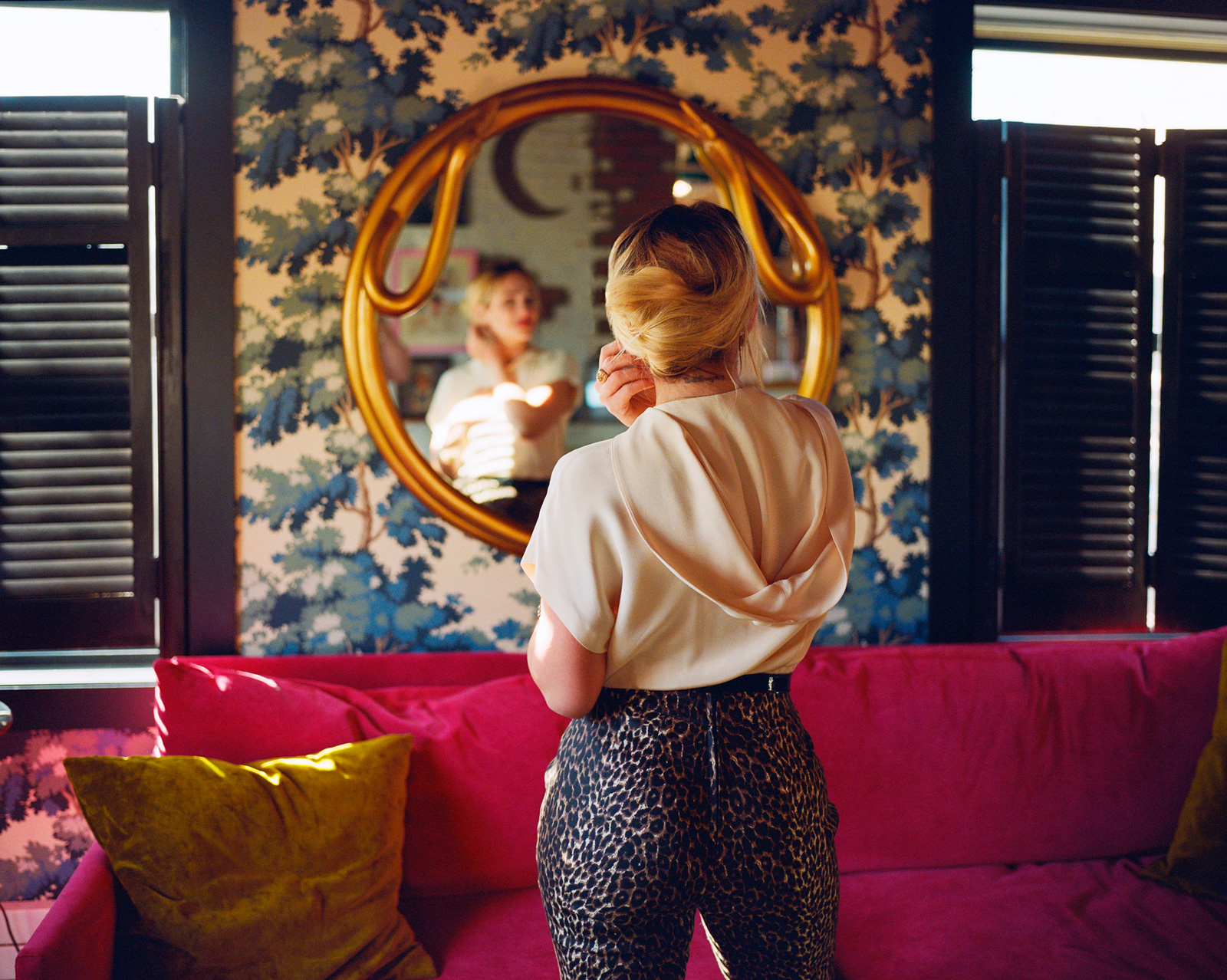 Just the mention of Alex lightens her. “He’s at home right now, sleeping, which I resent. I say this to him all the time: I hate the sleeping man.” The Australian singer-songwriter is her muse and her buoy, and she, his—“We’re like this corny art couple. We help each other.” They talk through ideas and admire one another’s accomplishments, helping one another through their respective fortes with insight and championship.

“The other day I sat down to write. I write sometimes, whether it’s just for myself, like diary entries, or I’ll write short films, little scripts, and he was helping me with my computer because I couldn’t get Microsoft Word up, and when I turned around and he was writing. He had written this whole passage; he wrote: ‘Hi. My name’s Jemima, and I am a motherfucker,’ and he wrote this whole motivational thing about how amazing I am and all the work that I’ve done and listed every piece of success that I’ve had, and it was really, really nice.”

She finishes her pink juice, and it’s time to go—she has work to do at her studio before picking the kids up from school. But before she leaves, I have to ask the question most artists—most people, really—dread: So, what’s next? Of course, there are many “nexts” for Kirke because, as Cameron reminds her, she’s amazing, but with regard to painting, she’s considering a concentrated series. “I haven’t ever painted men, other than the person I’m sleeping with, you know. I don’t think I’m going to do a series of just men, but I think it will be more focused in that direction. I’m painting a lot of portraits of my boyfriend at the moment, and I like the idea of just staying on one model the whole time and seeing what comes of that.” We can’t wait to see what comes of that.