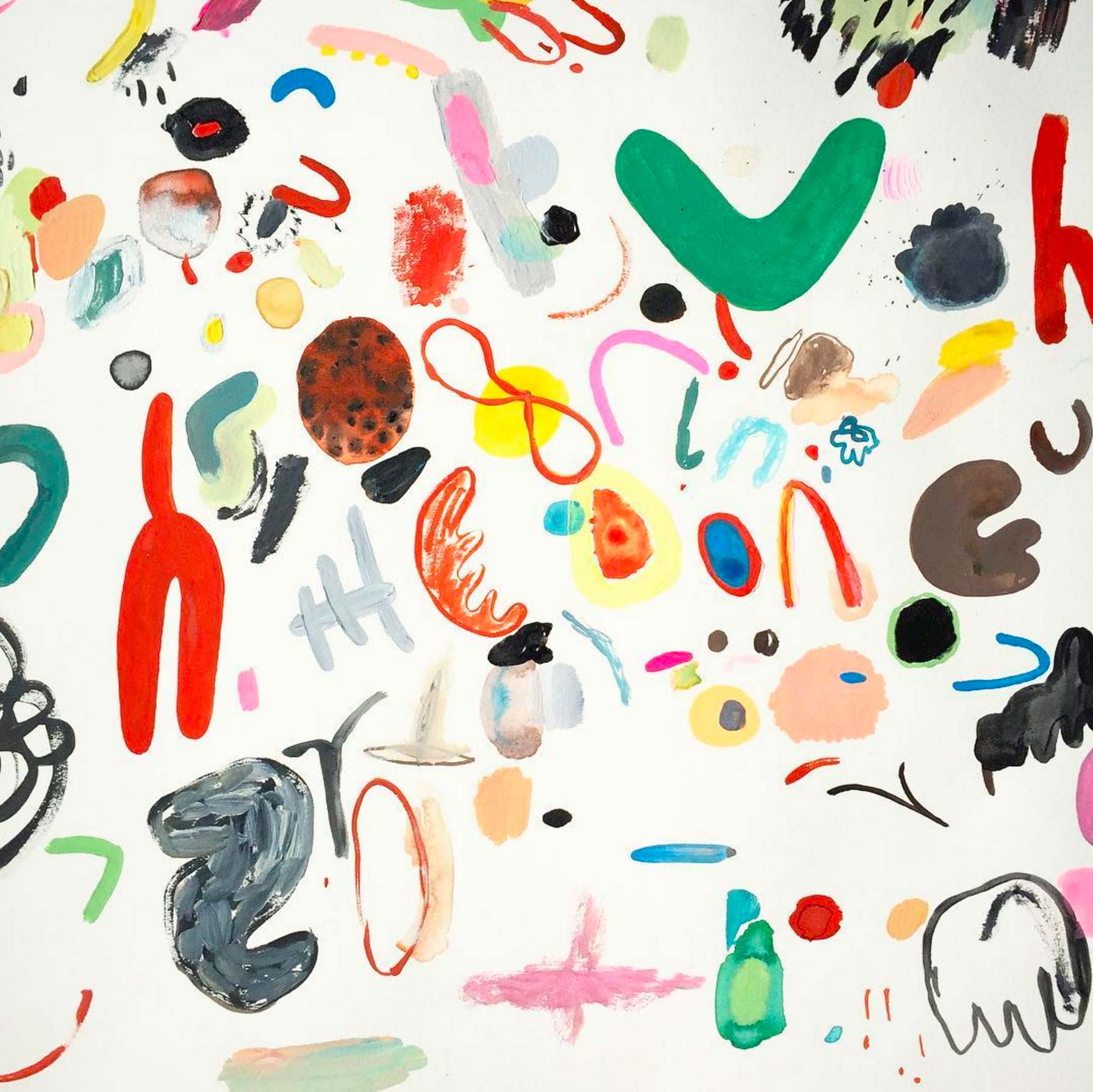 It’s been raining in San Francisco for weeks. The mountains across the bay have turned green, making the red of the Golden Gate Bridge scream, but the sky has stayed grey. The homeless staying dry are tucked under the few awnings of abandoned buildings. Patagonia down jackets everywhere, worn with rubber rain boots that squeak with every step and leap over each puddle. This is no place for slip-on Vans. Parking is a bitch in the Mission District of the city, where artist Kindah Khalidy has her studio. Waiting in the lobby of her building she looks up and smiles. Then, after following her up the stairs to a space on the second floor, she opens the door and walks in. There are few lights on, but the room is illuminated naturally with the bright colors pouring from the canvases, both big and small, that are leaned-up against the walls; glitter and confetti blanket the floor, and paints and brushes are scattered across tables with a few drops that have escaped to the floor. Standing there in her dark blue denim jacket with wool showing around the collar and baggy painter’s paints of the same color with blotches of paint running up her leg, Khalidy slowly begins to blend into the dark corners of the room while her work eagerly steps forward.

Khalidy’s upcoming fourth solo show “Nuclear Garden” opens this month with over 120 pieces featured in all sizes. She has been basically living in her studio painting the last pieces of her show and choosing or cutting all the others.

“I’ve been holding onto a lot of this work, some of it for almost four years,” she explained. “I didn’t want to do a show for awhile, I just wanted to focus on this body of work. I am making a site specific piece for the show, but most of it is stuff that I have already been making. Most of the things I was creating were just for the point of making them not for the show.”

“I really wanted to push myself to make my biggest work on canvas,” she said. “The biggest one I have done is just one of the panels, so I’m doubling it for the show. I am excited to play around with the diptych feature, I have been really into that lately.”

Her painting process is improvisational, starting with one color and then building off from there, working with different color combinations and relationships.

“When I start I might have one of my favorite colors at the moment in mind, but for the most part it kind of happens as I’m making it,” she explains. “I make those decisions pretty quickly. My favorite color changes pretty frequently though, right now it’s this sort of orange red, but I like accepting all colors.”

Khalidy grew up in Monterey—a quick jaunt from the city her studio now resides—drawing, sewing and crafting things. She moved to San Francisco ten years ago to pursue her artwork full-time. There is a determination in Khalidy that makes her stay in the city. She moved into her current studio two years ago and commutes almost two hours sometimes from where she is currently living in the East Bay. “I just want to win at San Francisco,” she says talking about why she stays. “Because at this point it’s just been chewing up and spitting out artists. All my friends have left and I just feel like I have to defeat it. It’s not very welcoming, but there are definitely people who appreciate art which is cool, but it is just so different from when I moved up here.”

Amadeus first caught up with Khalidy about two years ago, for a feature in our sixth printed issue. Since then determined artist has kept her head down and focused intently on her work. “Nothing has really changed, I’m just making bigger paintings and more of them. I pretty much just paint all day everyday, sometimes I might go on a hike. I just moved into a house and it has a garage space so I set up a little painting, sewing, shipping area in there.”

Lately the business of Kindah Khalidy has been the center of her focus. “I think orders have kind of taken over painting. When I wake up I’m more thinking of what needs to get out in the mail, and painting kind of gets pushed to the wayside for me. So it is more of a luxury, now more than ever, when I get to paint.”

It’s a balance she works with—painting and business—that she has to try and keep even, making sure one doesn’t take her too far away from the other. “It doesn’t get away from me, I just end up having to put a lot of time in to make sure I get to do the fun stuff. It’s worth it to me.”

When she is painting however, the environment of which she paints in is constantly changing depending on her mood and feelings at the time. “I like listening to music, but also appreciate silence too. I think it is good to try and hear your thoughts while you are working. But I like music sometimes too. I’d say my taste hasn’t changed much since middle school and neither has my iTunes,” she said giggling.

“I kind of stopped downloading music.” admits Khalidy. “I like the Petshop Boys, and my boyfriend got me into Misfits and Bad Brains. I also like New Order and I know every pop rap song on the radio just from commuting to and from the studio.”

After the show Khalidy has no intentions of slowing down or taking a break. A new project she has been working on is hoped to be coming out in August, which is a painting book that comes with different prompts, paints, canvasses, and brushes.

Her show opens on February 25 at 7p.m and runs until March 25 at the Chandran Gallery in San Francisco. Opening night is also Khalidy’s birthday. “I asked if we can do a confetti drop and they said yes.”

For more from Kindah head to her website and check out Amadeus issue 06, in which Kindah is featured, here. 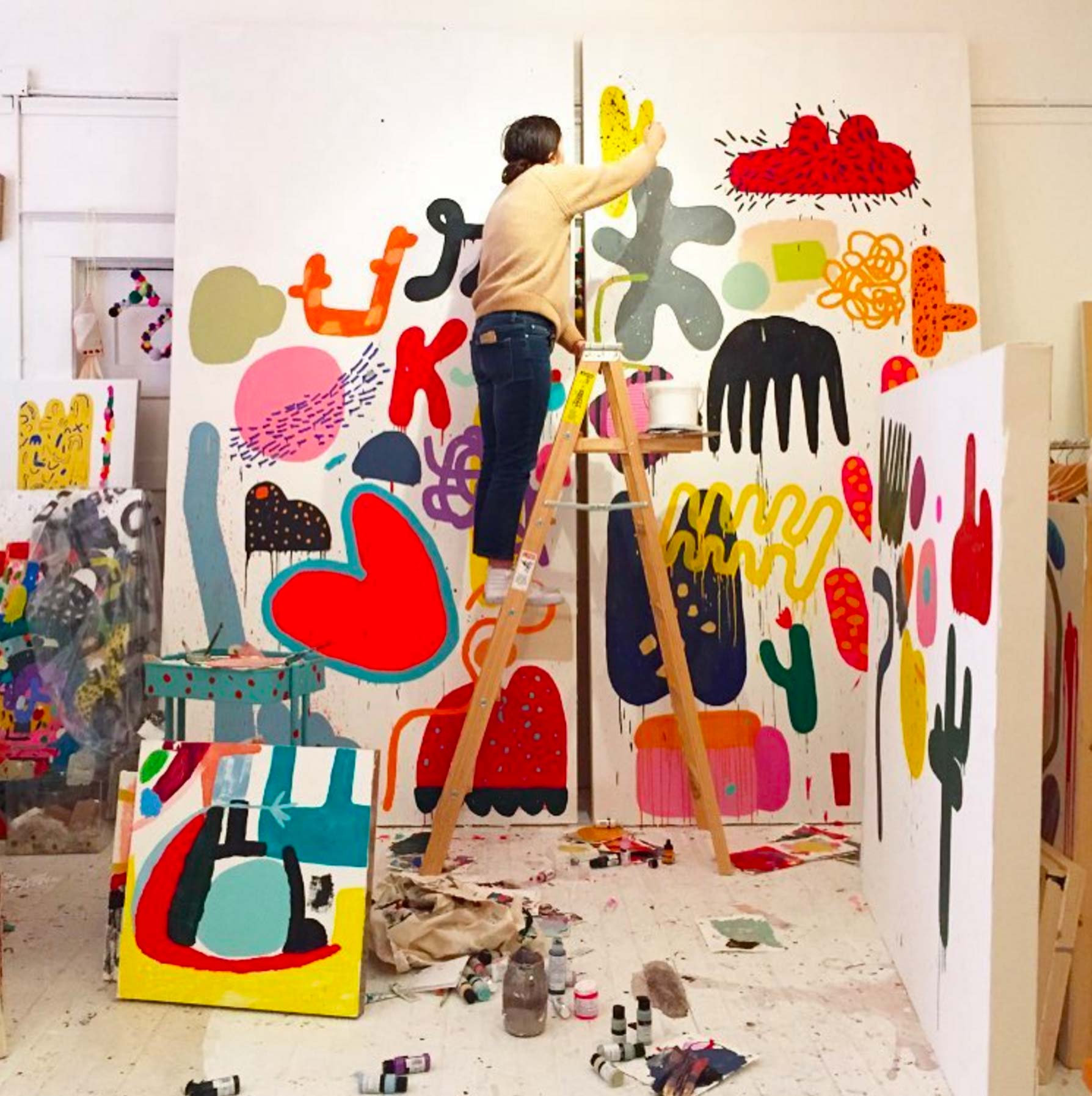 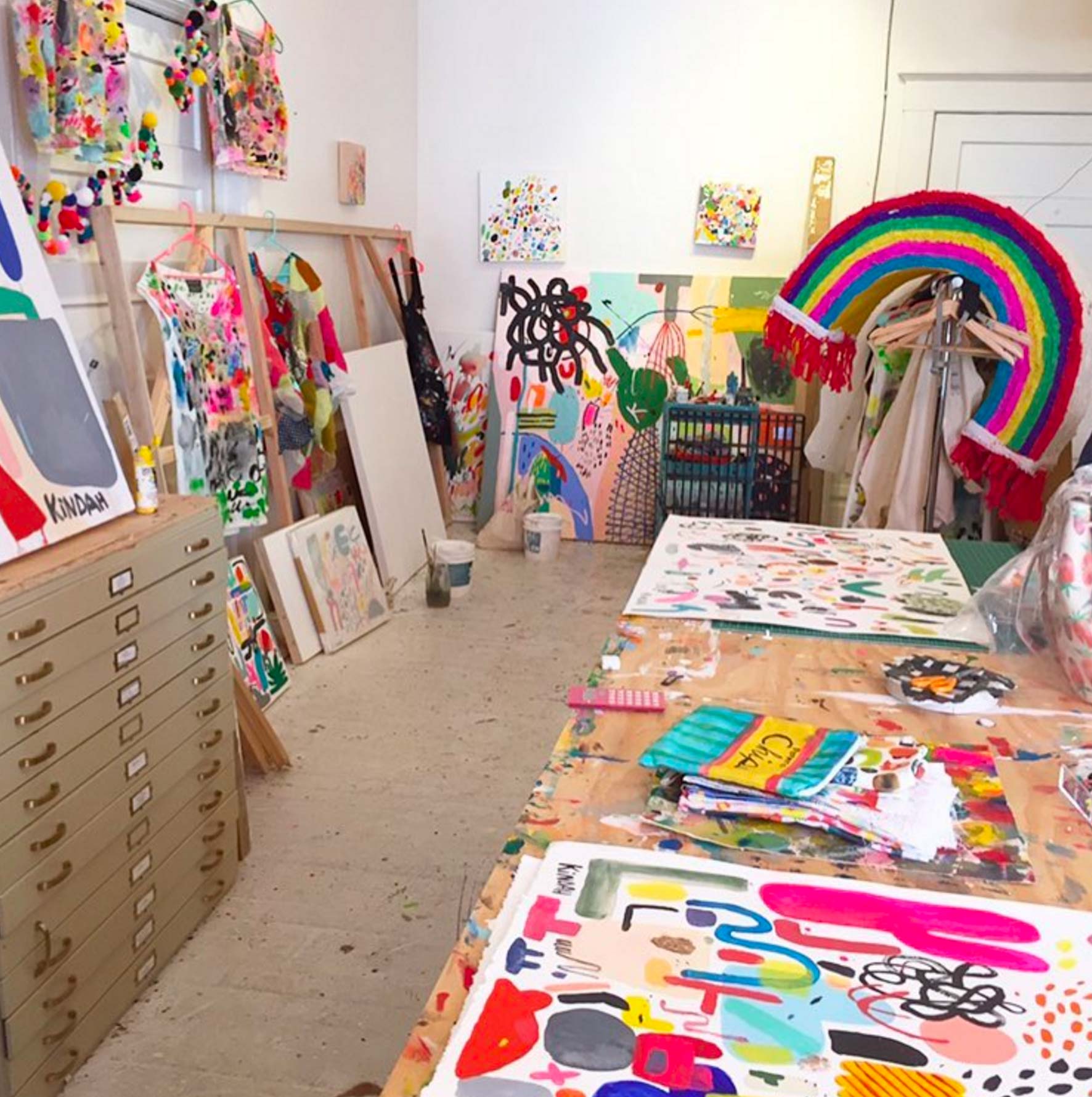 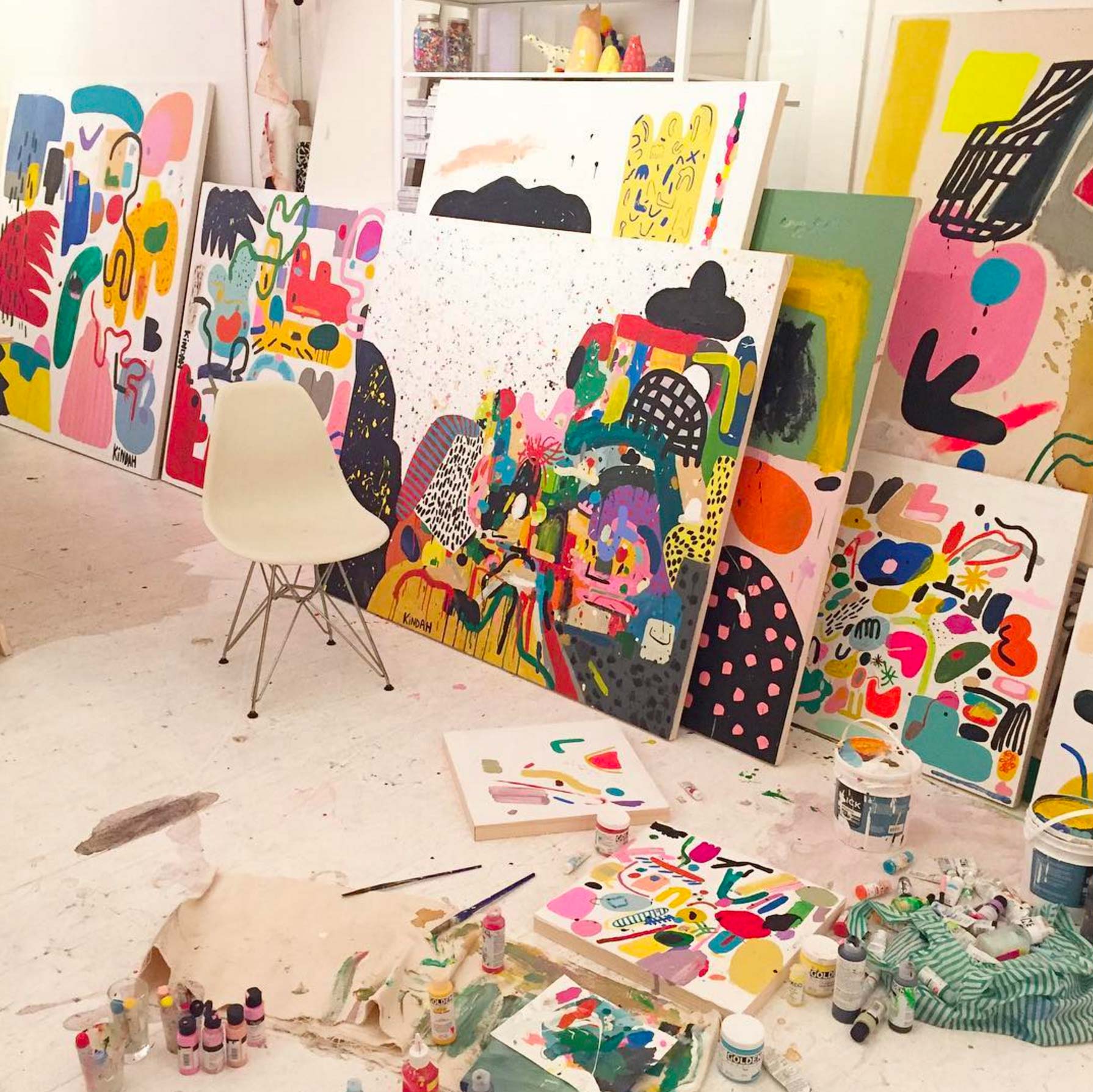 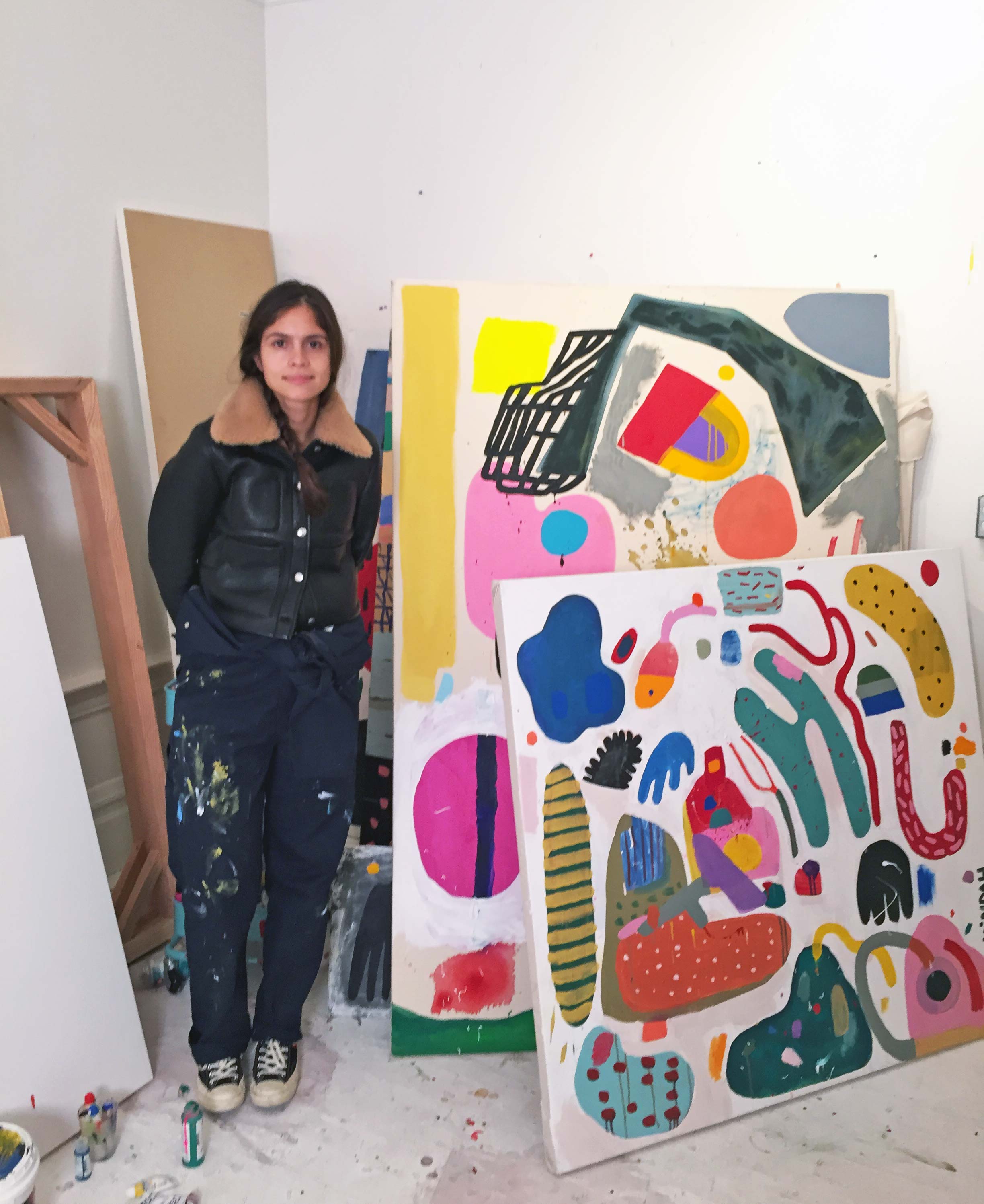 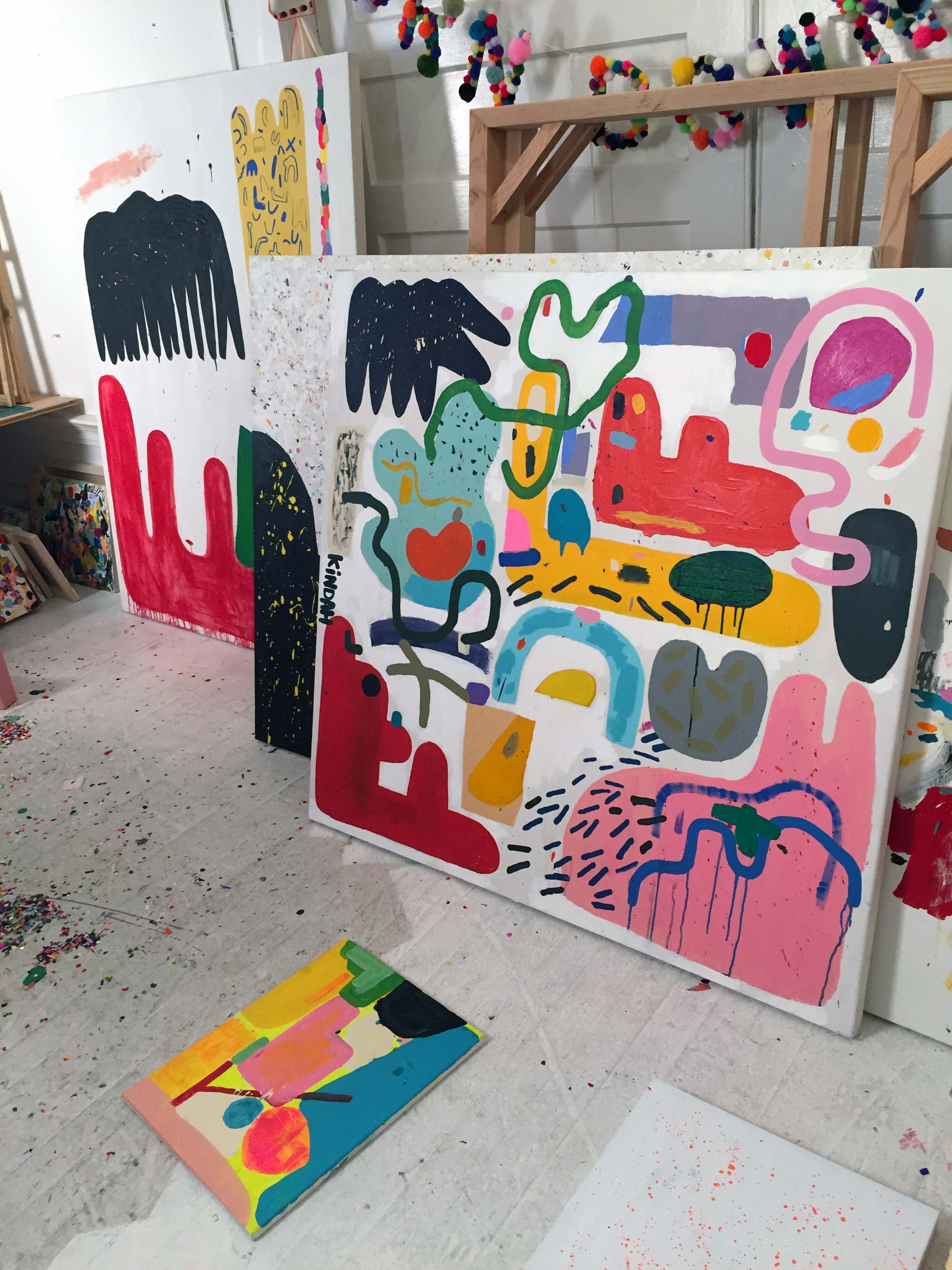 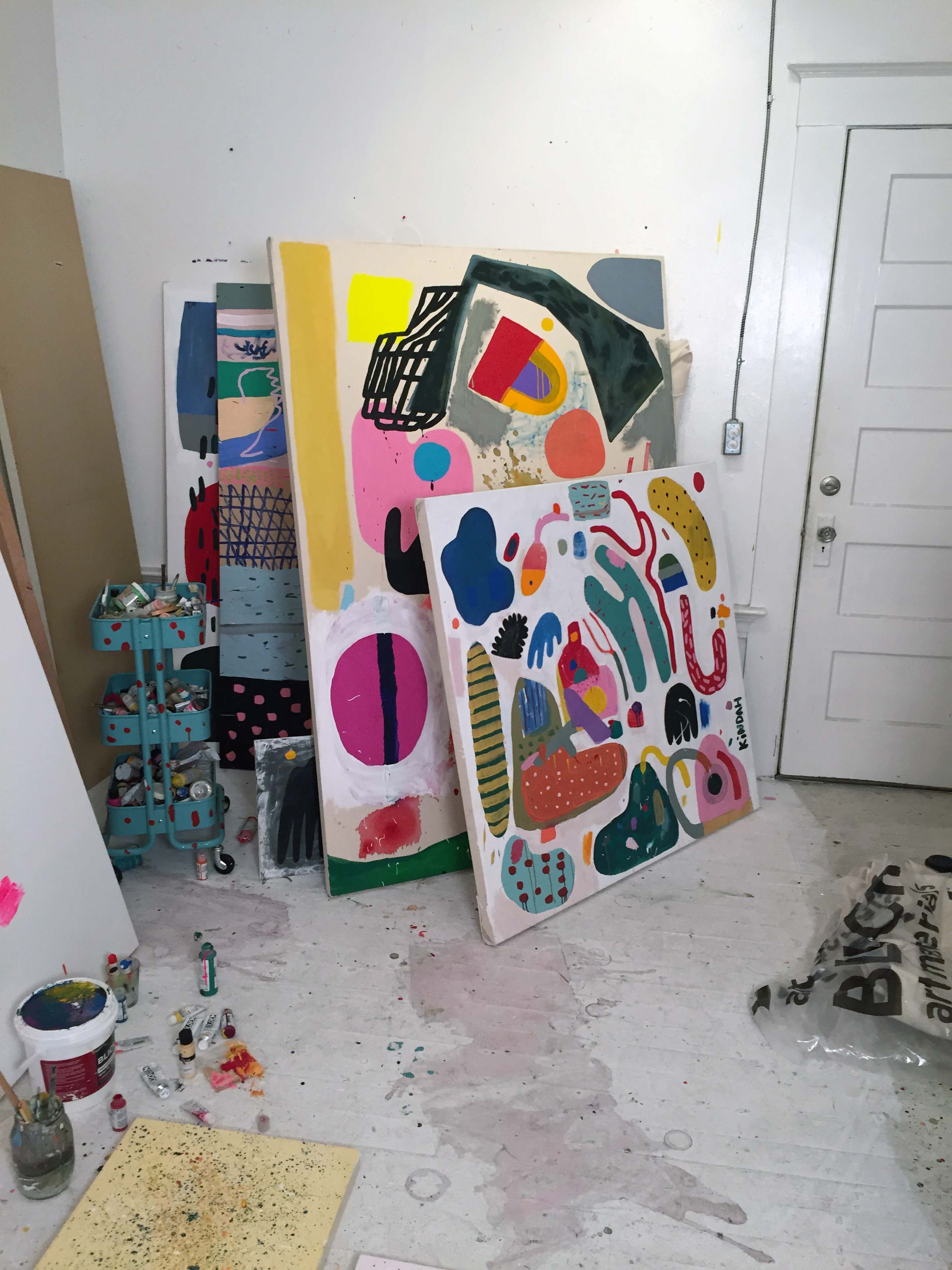 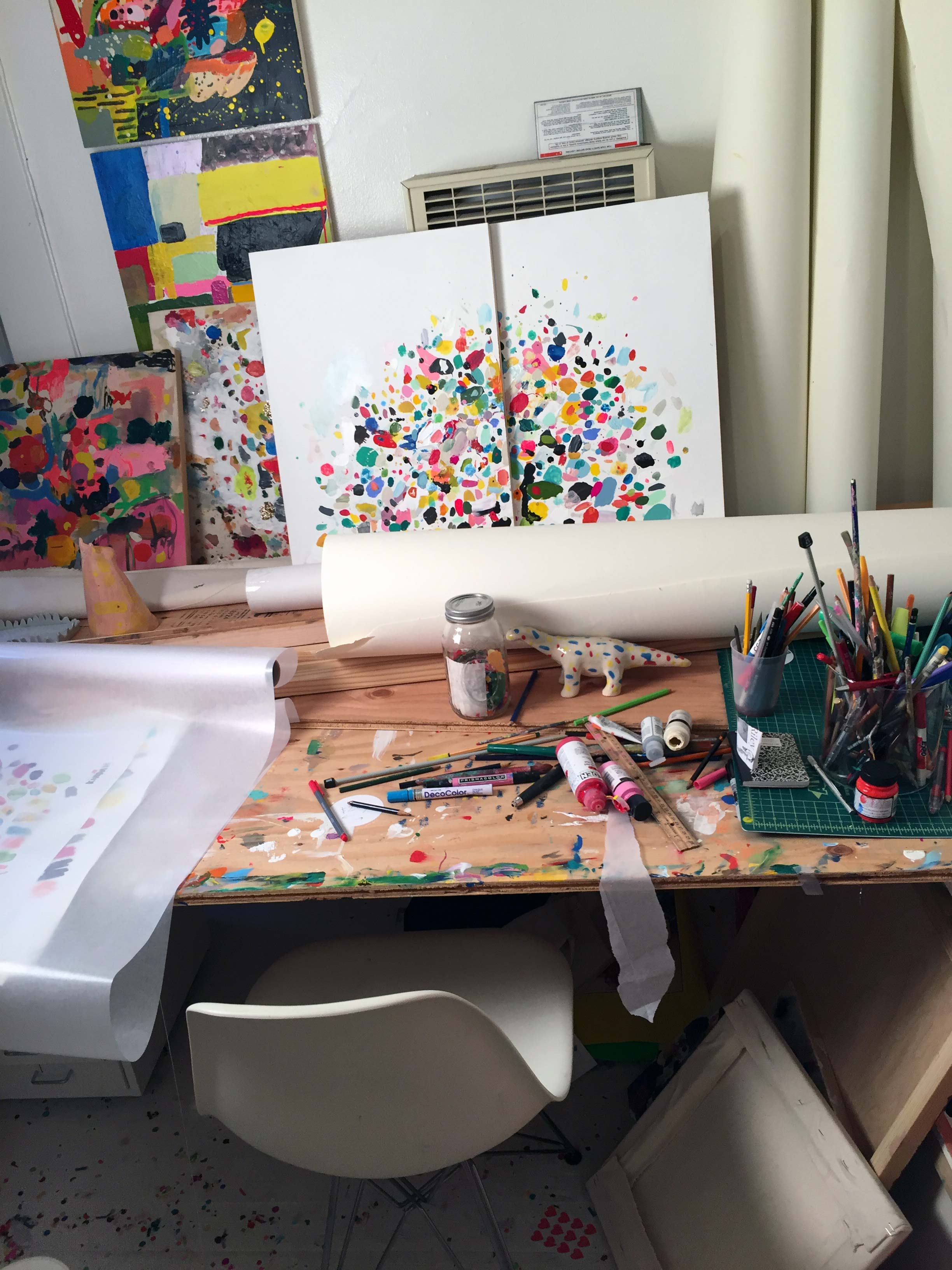 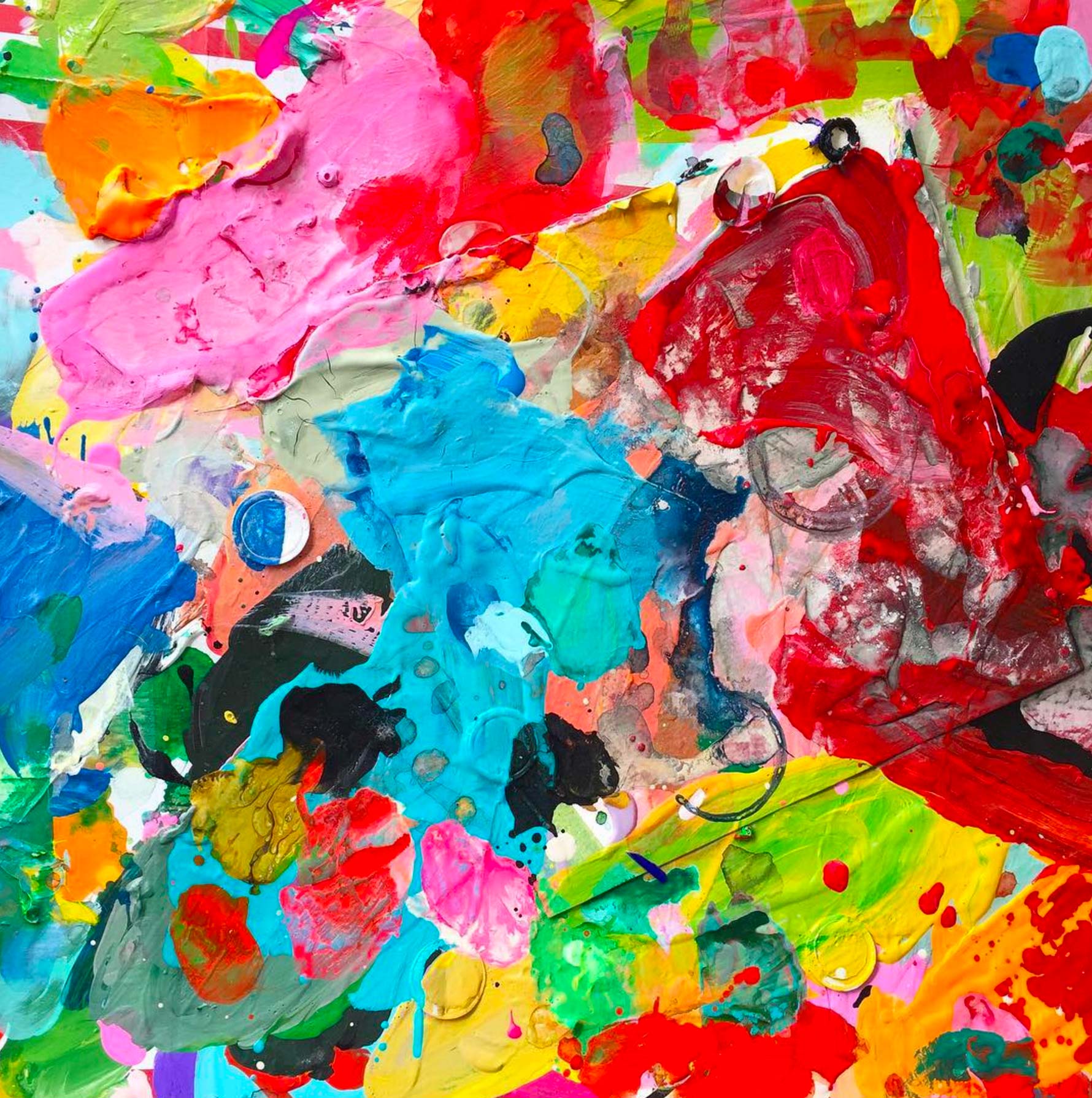 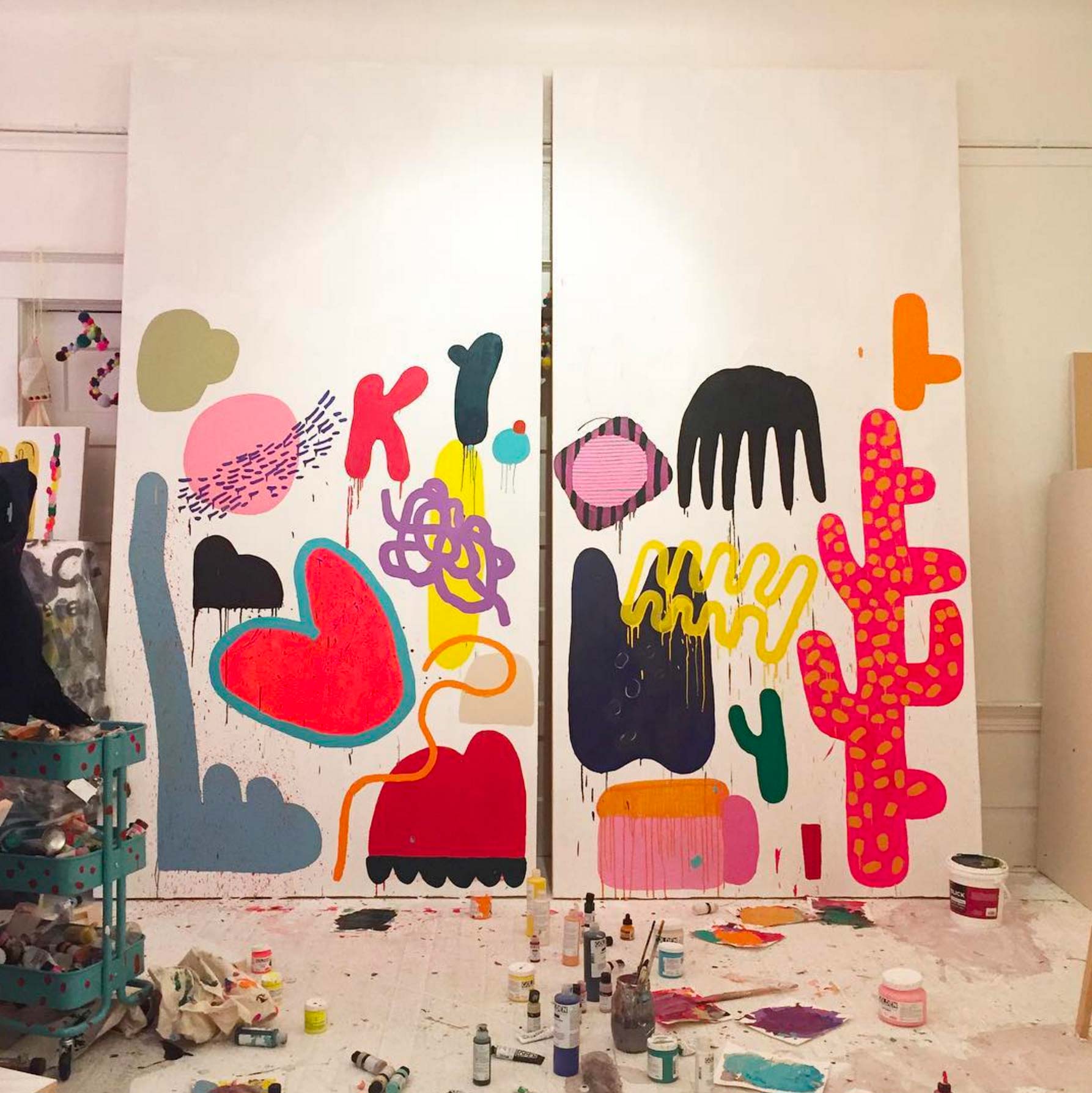 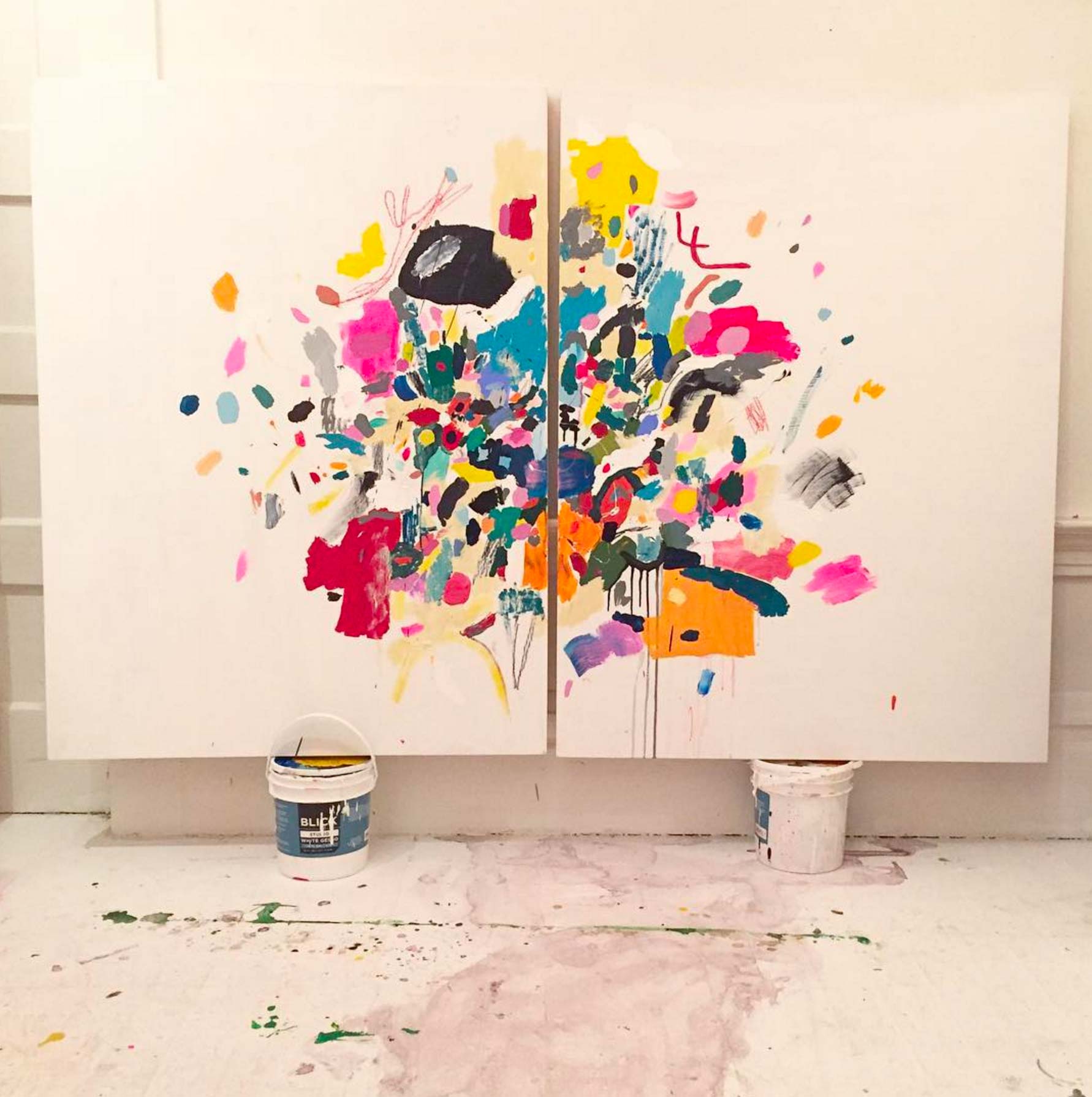 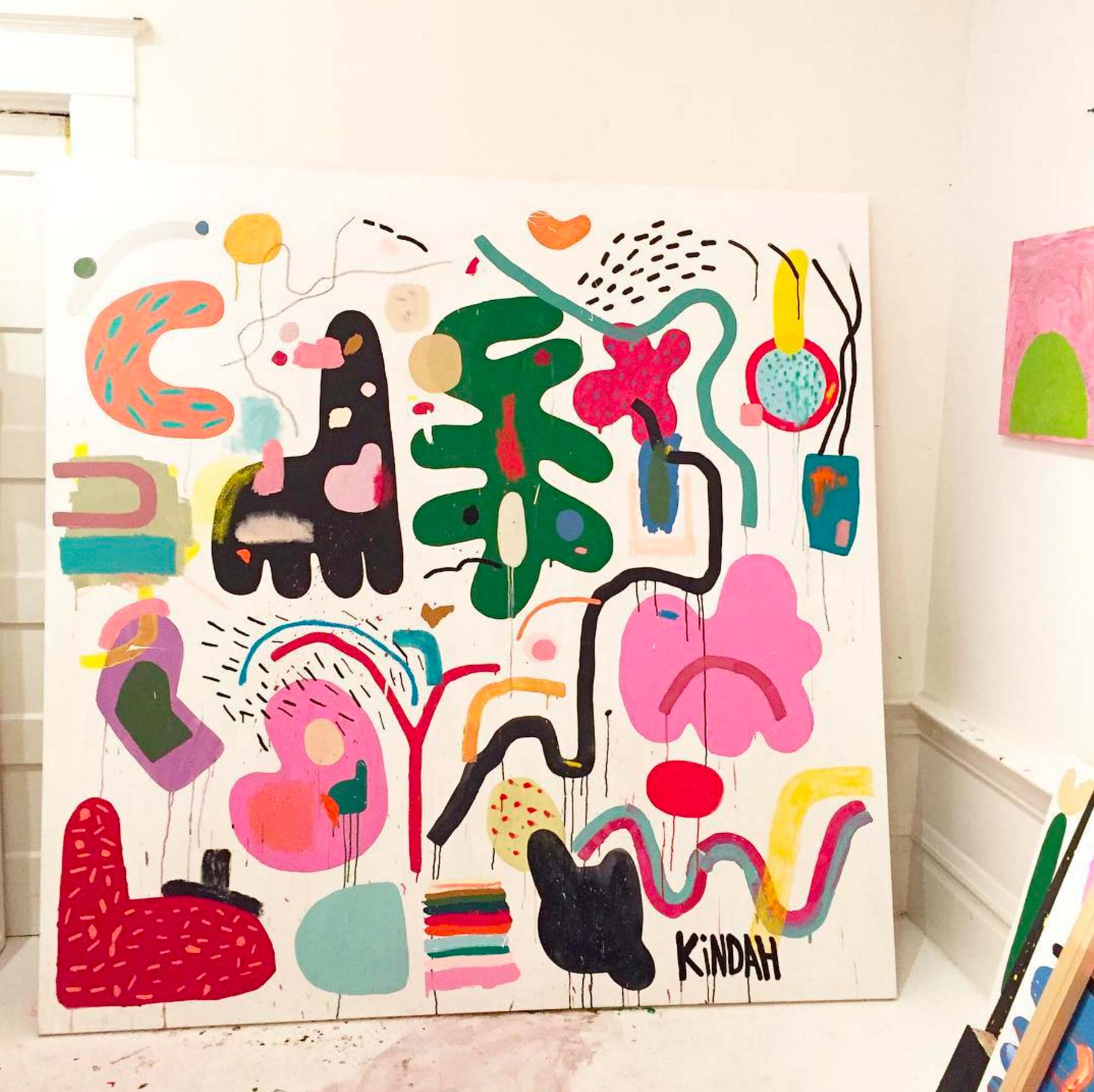 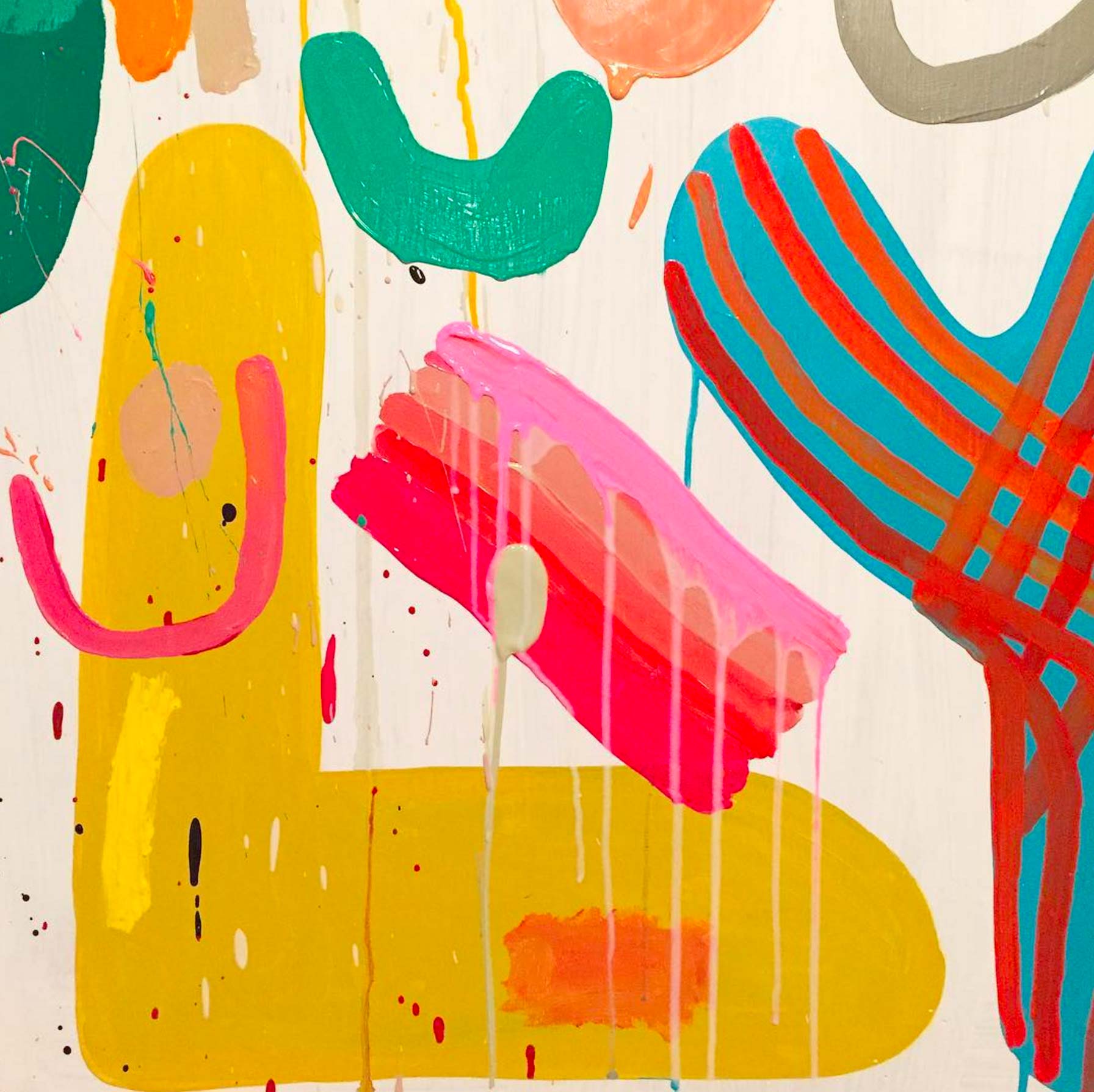