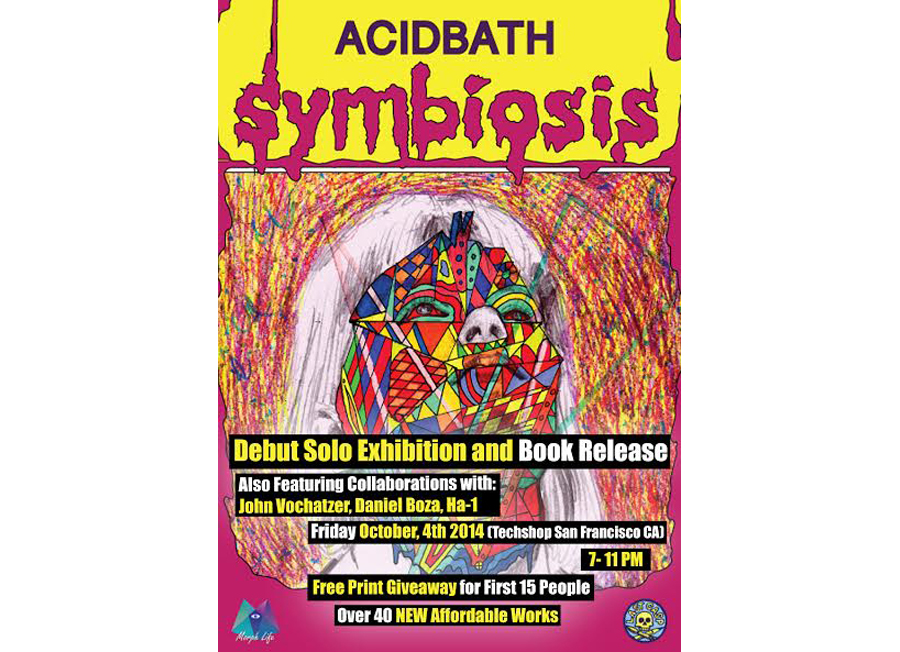 It’s a rare to get the opportunity to peer into an individual’s sketchbook. Usually used as a deeply personal tool to work out the things that swim around one’s brain, San Francisco’s Acid Bath has released his second book that not only comes in a beautifully bound hard and softcover form, but serves as a distinct look into the chromatic inner workings of Acid Bath’s artistic mind.

Symbiosis – out now and available for purchase online – compiles three different series of artwork spanning the last three year’s of the young artist’s career and features a completely new and never-before-seen series of artworks.

If you’re in the San Francisco area, Acid Bath will be hosting a launch party for the book at Techshop, where the artist will show all of the original work from Symbiosis. All works are available for purchase by those that want to collect an original piece. Pre-order a paperback copy for $15. The hardcover copies are $35 each, and come image wrapped. We got a chance to talk to Acid Bath on the eve of his release, where he told us about 90s inspirations, the project’s biggest challenges, and what he has found most fulfilling since working on this new publication.

Is there a continuity to the pieces in Symbiosis? Is there an overarching theme or any repeating imagery throughout the collection?

Symbiosis is actually a large compilation of 3 different series of art I did over the last 3 years (2011-2014). The first series is my early work, which I call Shrooms And 90’s Cartoons. The second series is called Chaos Theory The Lost Entries, and the final and more recent series is entitled Paradoxical Visions. In fusing them all together I created Symbiosis. Each series contains about 20-25 works, and I’ve also thrown in some collaborations I had been working on with other artists in between personal projects.

What was the greatest challenge putting together a project like this? Was it easier this time around creating the book than when you came out with your first?

I would say the greatest challenge was stepping out of my comfort zone of handmade work, and learning some digital formatting skills. I think it was easier this time around simply because I had a little experience with the programs from last time I put a book together. So it was easier to get in the flow of things although all the digital stuff is still pretty new to me.

How many pages? How many pieces altogether?

The hardcover copies include 66 pages front to back, and the softcover copies will have 52 pages, they are without the interview and the art show photographs, which is a special feature to only the hard copies. I would say Symbiosis contains about 75-80 original pieces from 2011-2014.

What aspects of Symbiosis are you the most proud of?
The main thing I’m proud of was the way the cover art came out. It was designed by a homie of mine, and pays homage to all the retro, grungy, 90s cartoons that inspired me. The cover is obviously an ode to Goosebumps, a show I was raised on as a child and one of the more popular media products of the 90s. I just wanted to use it as a way to pay homage to my era and the pop culture that helped inspire certain aspects of my work.

Get your copy of Acid Bath’s Symbiosis online now!