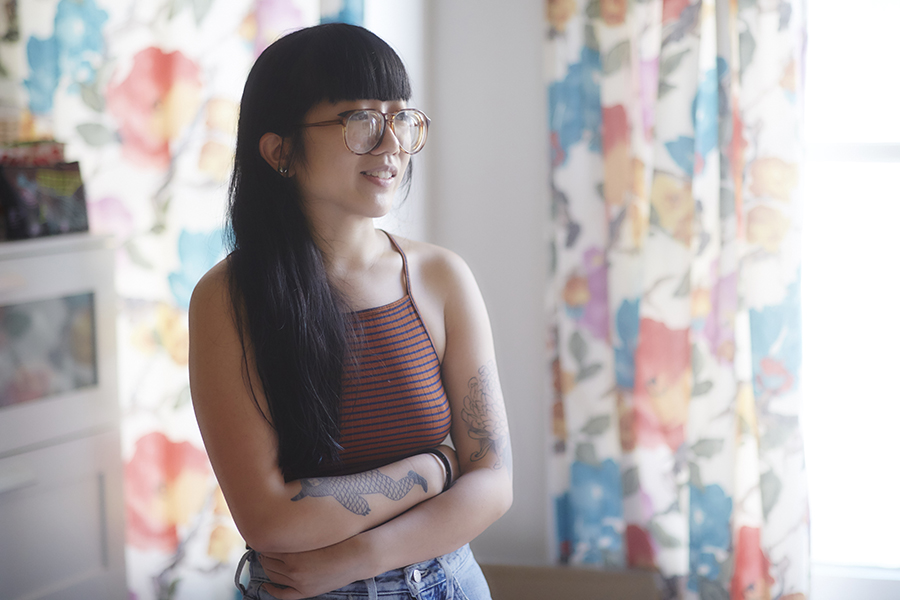 It’s incredible: the depths, both physical and emotional, that artist Kristen Liu-Wong is able to capture, and all atop a wooden panel. From her post in Los Angeles, the multi-medium artist sets scenes with inanimate details and geometric backgrounds, all brought to life in neons of the 80s and a resin seal. They’re stories of death, of sex, of comfort, of gruesome truths and made-up wonders, of real people, and lost people and the things they represent. Applying just the right amount of imagination to candid reality, Liu-Wong imparts the things we’re taught to cover up, and beautifully, too.

When I look at your pieces I feel like I’m not supposed to be seeing what’s going on in them. They’re very mischievous and situational. Tell me about the people in these pieces, who are they?

I like to make all the people look the same in my pieces, but with some slight differences. They stand in for me or for different stories that I have, but I don’t really want to actually paint things from my real life. By using these general figures, I can make my imagery broader. They are archetypes. Lately, I’ve been focusing on ideas of ‘The Hunt,’ and old mythology.

How did you stumble into that?

I’ve always liked opera, but I guess I rediscovered it lately. I like the drama. I’ve been wanting to make pieces that are really dramatic and brutal. I’ve just been trying to push myself.

What are people’s reactions to the gruesomeness of the scenes in your paintings?

So you say that most of these stories are yours,  but you’re just trying to generalize them more?

It’s hard for me to do work that is personal because I’m more of a private person. I don’t like to share too much. I like to do these figures that don’t look like anyone specific and these surreal situations, so I can translate what I need from art, but in a way that can also satisfy everyone else’s needs too.

I want to know more about where all this imagery comes from. There’s sex, and guys stabbing chicks…

I watch a lot of murder shows. I watched all of Forensic Files, and serial killer documentaries. I’ve always been fascinated by serial killers.

Which serial killers are you most fascinated by?

I guess the scariest to me is this guy in Austria I heard about, who locked his daughter in this cellar for ninteen years. He had seven kids with her, and nobody knew—the whole rest of the family was living in this unit above.

So, is it the fact that people can be that evil that intrigues you the most?

Yeah, it wouldn’t even occur to me to think of these things. And it’s weird to me that so many people have, and people will continue to. It makes you think about the nature of good and evil.

Are you a collector of anything in particular?

Legos! I’m really into Legos. If people give me their art I like to hang it up, but I have so much from people I don’t even have room to hang them up anymore.

You recently started freelancing, but had a killer job in New York before you moved to L.A.

It was the best job ever. I worked at a printmaking studio. We’d hand carve different sized stamps and do Chuck Close oil prints. It was really cool to see how craftsmen work; that level of intensity and skill and dedication to something that isn’t yours. It taught me a lot.

Just basic studio skills. Mixing paint, how to be careful, how to make wood panels. I got to hear cool stories about famous artists like Jeff Koons, and got to see Chuck Close’s marriage. He sent his wedding video to the whole staff, so I randomly got to see him get married [laughs]. I got to visit his studio, too. I never actually got to meet him, but that was cool.

Do you want to continue predominately working freelance?

Well, I’ve signed up for so many shows that even if I wanted to have a job at this point, I couldn’t. Freelancing has been nice. I’ve been able to do way more work and obsess over it. Before, when I had a nine-to-five, I’d come home at six or seven and then paint until one or two in the morning, and then repeat the cycle, and work all day Saturday and Sunday. Now I work just as much, but it’s all painting.

Has that been good for you creatively?

Do you think in patterns? Where does your intricate line work come from?

My mom was a textiles major in college, so I’ve always been surrounded by patterns and fabrics.

Tell me a little bit more about your upbringing. What did your parents do? Were you always artistically inclined as a child?

Yeah, my mom and grandmother raised me. My parents got divorced when I was young. I was raised in a house full of women—my sister and I. My mom and grandmother were both elementary school teachers. My mom always took us to museums and libraries. We definitely learned an appreciation for the arts and literature. My sister is an art history and English major at Tufts, and I’m an art major, so I guess it worked!

Let’s go through a few of these pieces. Tell me what’s going on in this one [a woman sits in skimpy orange underwear and a jacket atop a work desk in an office].

This one I was thinking of a Wall Street woman. I also just really wanted to paint a fish tank. It’s kind of irreverent. Sometimes I have paintings like that, where I just want to paint certain things.

I love this one with the gimp. It has the violence and sex I often find in your pieces.

Yeah, I really like painting fetuses in jars. I’ve been thinking a lot about Hari Kari and disemboweling yourself. It seems like such a brutal way to go out. I also saw this really cool Japanese wood block print of this girl in a crazy pose, and I wanted to redo it. I’ve been looking at a lot of Japanese and Greek art for the way I pose my subjects.

This one has so much stuff going on [a piece entitled, “Satan Worship In The Suburbs”].

This one is actually based on a serial killer documentary I was watching. It’s called Satan Worship in the Suburbs, which I thought was hilarious. So I decided to paint that.

Looking at all of these, I feel like I am seeing something I shouldn’t be.

I like to have a voyeuristic approach. We all want to look at shit that we’re not supposed to.

For more from Kristen head to http://www.kristenliuart.com/.

All photos by Jay Kantor. 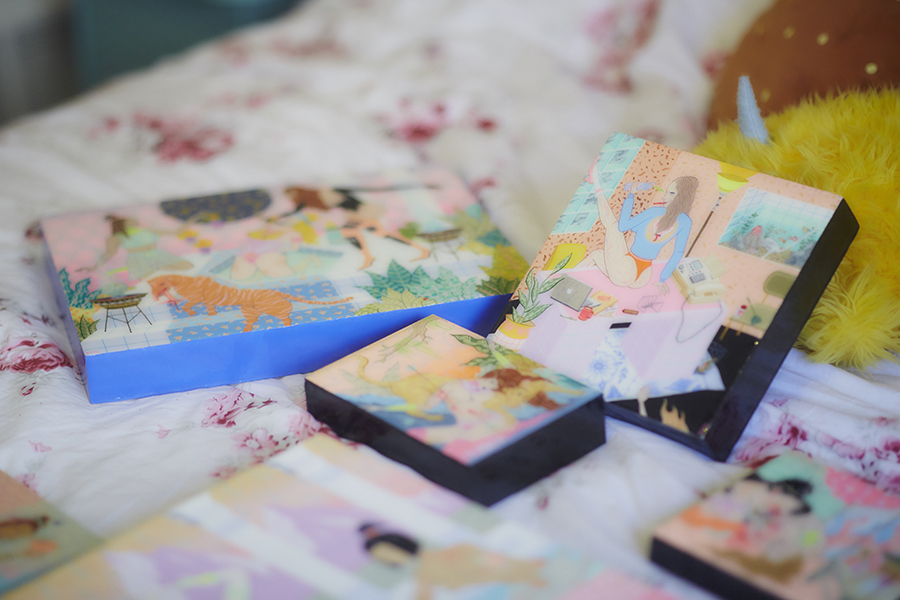 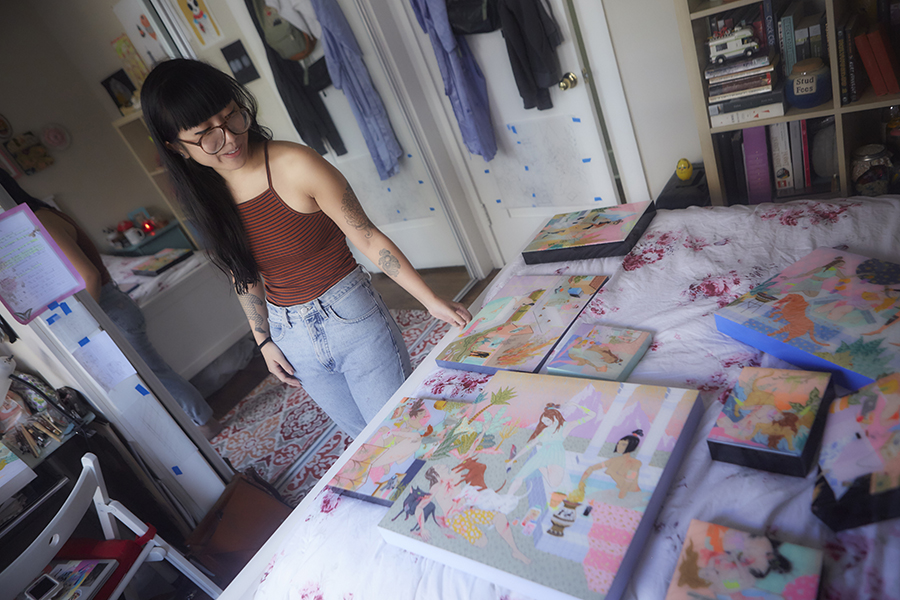 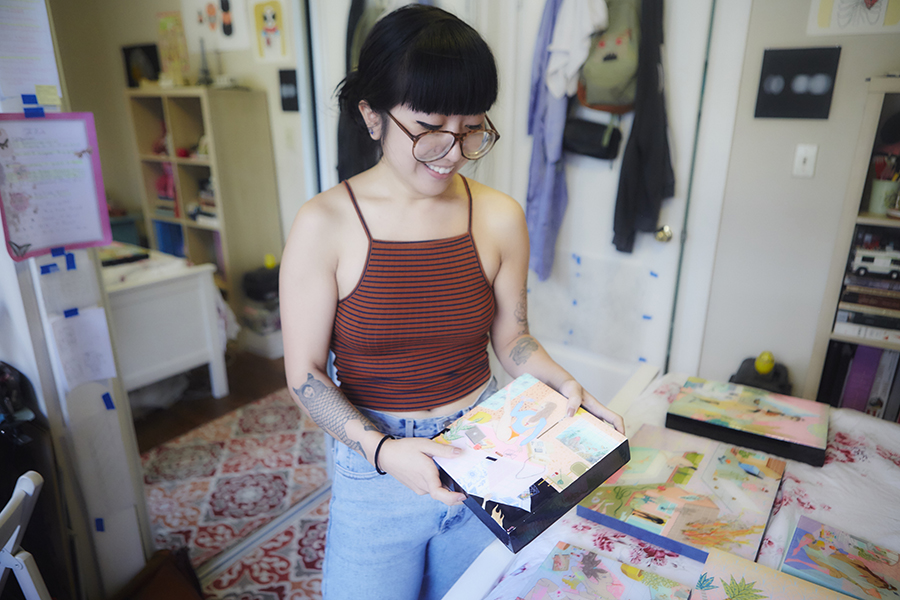 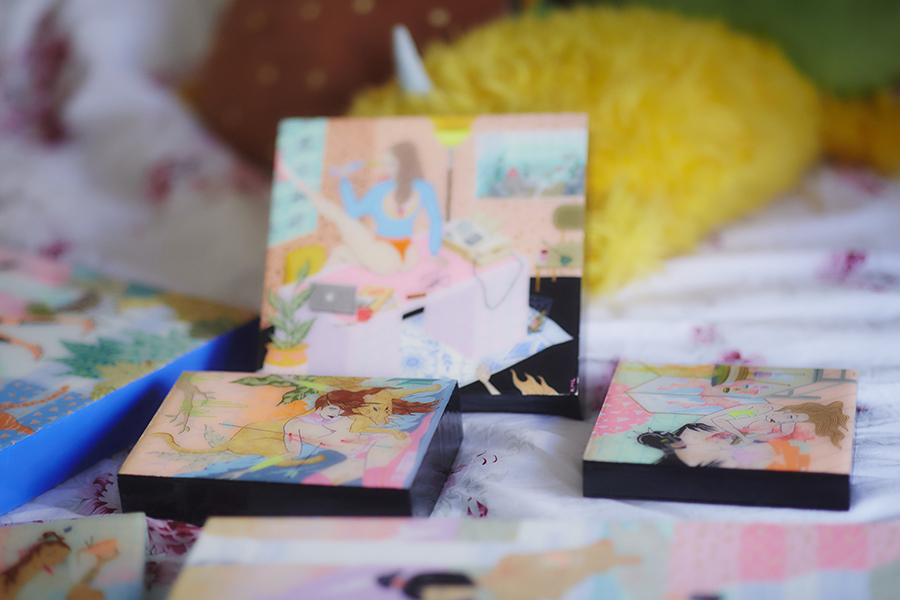 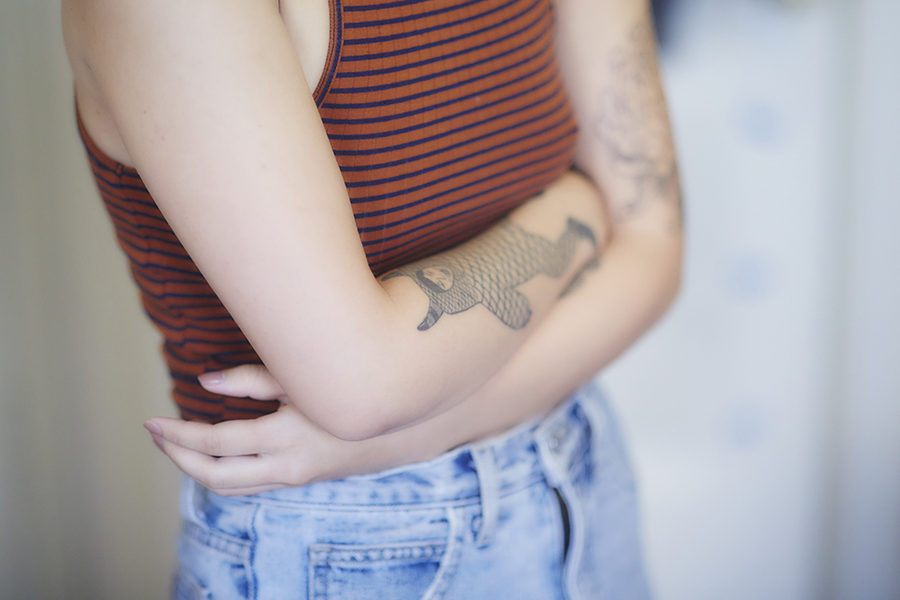 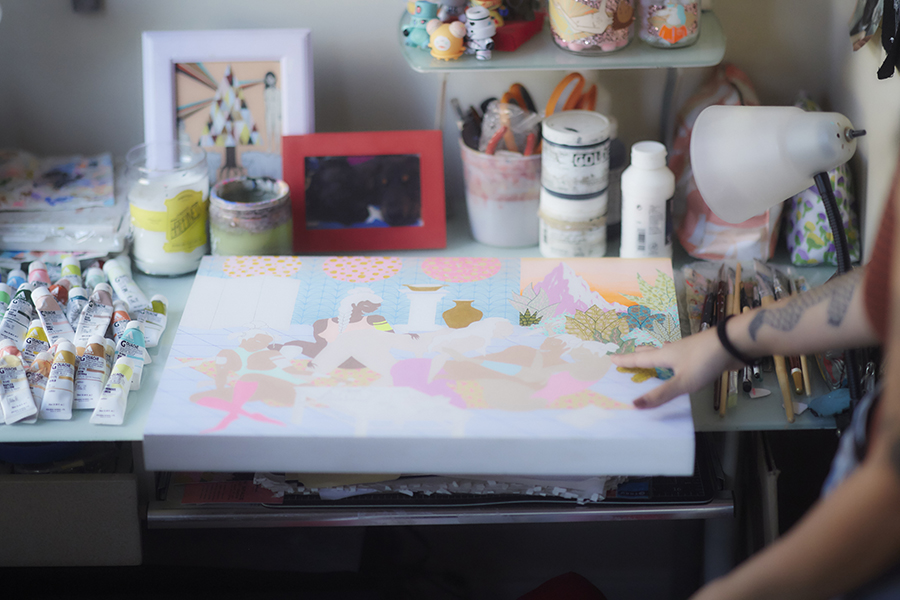 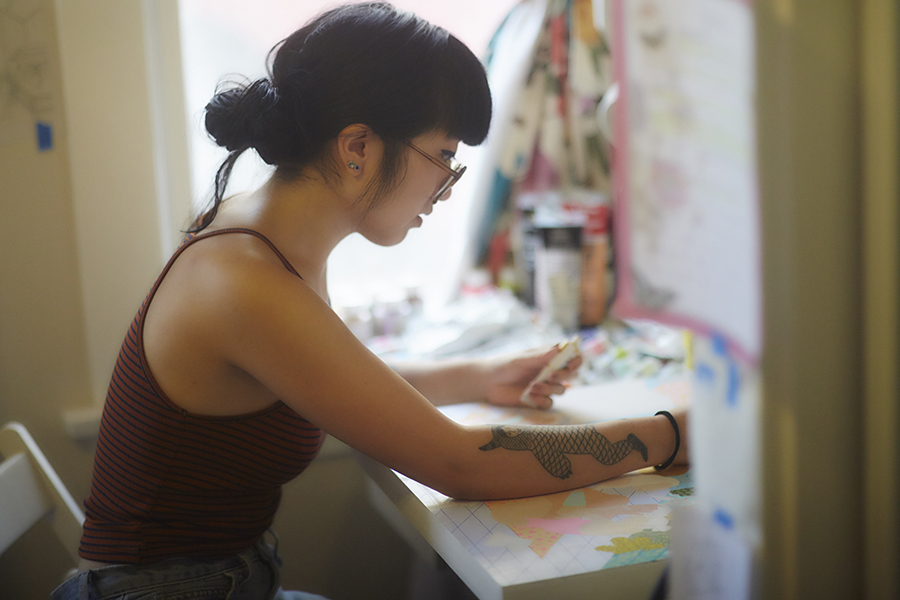 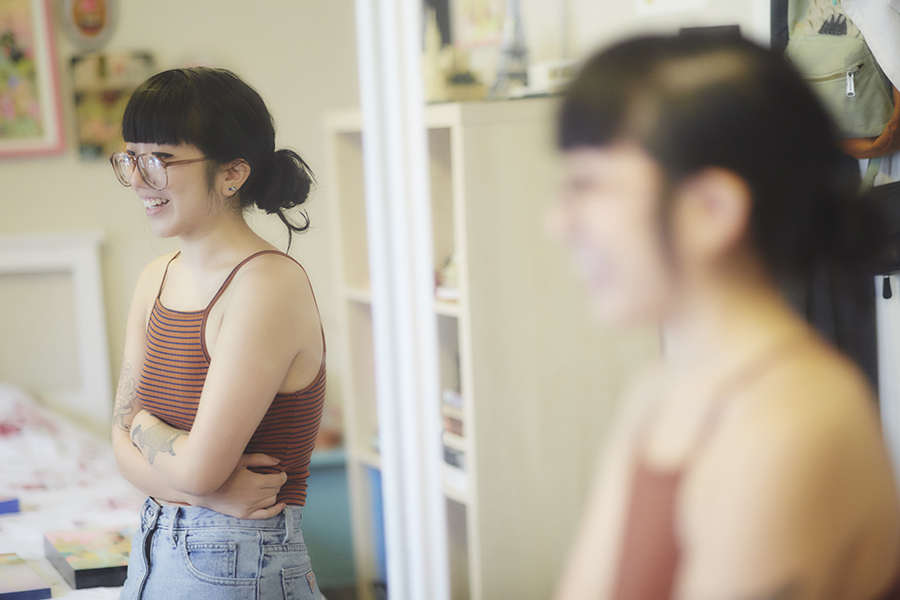