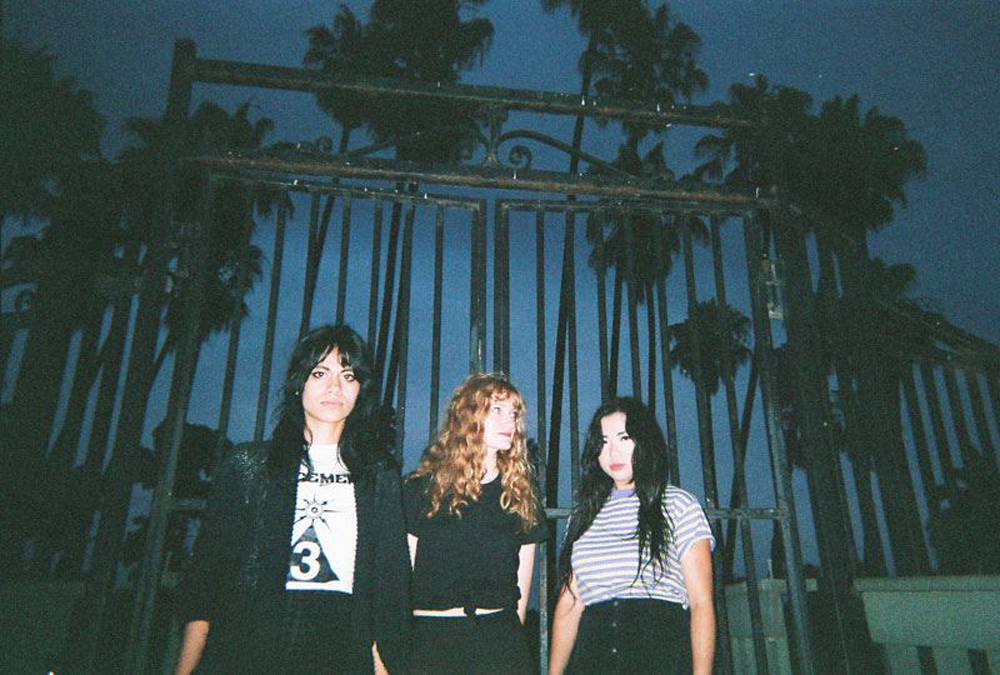 The amount of psych/garage rock bands that currently inhabit Los Angeles, and Southern California in general, is vast. Hordes of bands playing all-too-familiar, reverb-drenched tunes can be heard at a number of clubs and venues throughout the city on any given day, which makes attracting the ears of jaded listeners quite a tough feat.

Yet, L.A. Witch’s own brand of scuzzy rock-n-roll stands out in the over-saturated genre, as it delves into somewhat unexplored territory between shoegaze, lo-fi, and ominous psychedelic undertones. The band’s debut EP is filled with sonically lustrous tracks like “Get Lost” and “Heart of Darkness,” that not only reveal a band with dynamic musical dimension – simple haunting guitar juxtaposes heavy, overdriven bass – but present great droned-out songs with layered harmonies and sinister tempos.

On the cusp of their first music video release, L.A. Witch’s Irita Pai and Sade Sanchez sat down with Amadeus to talk new material, new drummer, and clinching a coveted slot on this years Desert Daze music festival bill.

You guys just played the pre-party for Burgerama in Pomona, how was that?

Sade: It was cool; it was a younger crowd, which was nice. They tend to be a little different than the crowd we usual draw. They have such a different reaction to the music. It’s nice to see people that are excited and actually moving around to the music.

Irita: Yeah, they are just excited about the music. I feel like everyone in L.A. is a little jaded, or at least acts like that.

So you guys went through some changes with drummers, but now Ellie English has taken on that role. Do you feel like the band has finally hit its stride?

Sade: Oh yeah, it wasn’t a difficult transition at all. Ellie has been playing for a while and her and I actually played together when we were 17, so it seems very natural. Before we asked Ellie to come on, it was kind of difficult because we had all these different drummers, but at the same time was interesting because you are kind of faced with a challenge.

The new EP seems to be getting quite a bit of attention.

Irita: Yeah, we released it through Manimal Vinyl on March 18th. We actually self-released the EP last year and had it up online. We recorded these three songs with our original drummer.

So no Ellie on these tracks then. Is the band working on any new material?

Sade: Actually yeah we’ve been working on a new set of songs and have already finished recording. We just have to add our finishing touches and then decide how we want to release it.

Irita:I think we are working on releasing a six-song on vinyl that should be coming out in late summer, early fall.

What’s the band’s writing process like? Do you guys write separately, or is it more of a collab?

Sade: I guess in the beginning I was writing a majority of the songs. All of our newer stuff kind of comes about naturally though, when we’re playing together. I think that comes with the time; being in a band together, you kind of understand how each other works, so it’s easier to write songs together now.

All of our newer stuff kind of comes about naturally though, when we’re playing together. I think that comes with the time; being in a band together, you kind of understand how each other works.

What’s it been like getting in the studio? I feel like you guys would prefer a more lax recording environment.

Sade: You’re right, we prefer a casual space because it’s always less stressful and doesn’t necessarily feel like you are recording, so you don’t feel the pressure. We’ve been in a few different studios and have found that the ones that feel like our practice space are the best. You feel like you’re just going through another practice and the performance comes out much more naturally.

Irita: Oh god! It’s hard to remember them all.

Sade: It’s hard to remember and then sometimes you just mix them up with each other. Obviously those shows when you are playing with bands you really love, like I personally loved playing with Cherry Glazerr and Santoros. I have to say that a lot of our recent shows have been really cool, fans are coming out, having a good time and there has altogether been good energy.

Irita: Yeah, the Cherry Glazerr release party show was awesome. And all the Conservatory shows in Pomona are so awesome; the crowd is always really into it.

S: There are also some really cool shows that we are looking forward to as well, like Desert Daze. We will be playing with bands that we grew up listening to so it’s pretty wild.

Irita: It’s funny because we went to the first couple that they ever had in the desert. I mean we were all in bands at the time, but we went to go see our friends’ bands play. We never thought we would end up playing the festival ourselves. It’s surreal.

What drives your musical sound; some major influences?

Sade: We listen to a lot of everything, but if I had to name a few bands that I grew up on it would be Joy Division, Brian Jonestown Massacre, Velvet Underground, a lot of Pixies, Cramps, The Gun Club, a lot of Punk stuff too. There is a ton of stuff, we are all really into films and weird art too, like I watch a lot of horror films.

You guys recently worked on a video for “Get Lost” right?

Irita: We actually saw the first edits for it the other day.

Irita: We couldn’t be more excited. We’re working with this awesome two-girl directing team. We went to the Salton Sea and shot for the entire day basically.

Sade: Yeah, we’re stoked because it’s our first video. We felt kind of stupid and funny doing it in the beginning, but once we got over that and didn’t worry about how it was going to turn out, it was cool. We can’t believe how great it turned out. We’re just so lucky that they approached us and wanted to just do it for us because they love the music. They are incredibly talented people, so we were really lucky. We should be releasing it in the next two weeks.