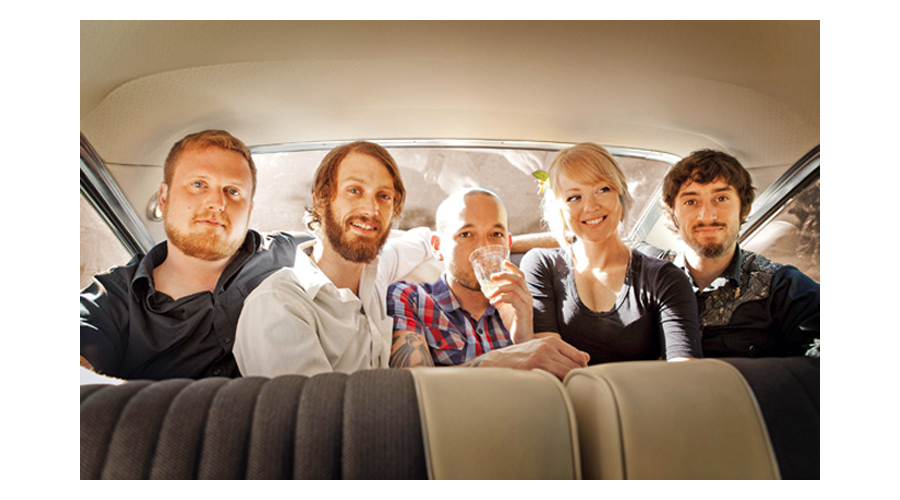 Some will say Murder By Death is a goth-country band, an Americana group or the plethora of genres that lie in between. In the group’s opinion, they are what they are at this moment. Producing music to fit the liking of their own musical interests, the band has found devoted followers that appreciate the diversity of each song and album. Between Sarah Balliet’s electric cello and the gravelly rasp – verging on that of Mr. Cash’s – of lead singer, Adam Turla, the band has vastly honed their sound, creating without a perfect methodology, and relying on the spontaneity of moments that only come about when friends are sitting around jamming.

The Indiana-based band has been creating their own brand of dark, whiskey-driven music together since their college years in the early 2000s, creating and playing in a variety of genres. After seven albums, Murder By Death has perfected the art of distinction; continually evolving sonically, and willingly taking new and divergent approaches to each project.

The five-piece band will be releasing their seventh album, Big Dark Love, tomorrow, February 3. Lead singer Adam Turla took the time to discuss haunted venues, unfortunate band names and a new recording process that just may prove to be their most successful album yet.

With Big Dark Love coming out tomorrow, tell us what the recording process was like? How was it different from any of the previous six albums you have released?

It was sort of different. Typically, when we make a record we end up doing like an extreme amount of rehearsals before we go into the studio and just make sure everything is ready to go- go in, record it, and that’s it.  With this record we did it really differently. We did three separate recording sessions each about a weeklong and we were just focusing on a few songs each time, like three or four songs each time. The idea was to just try and get some different sounding songs. For example, one thing that we did that we have never done before was to first have me go into the studio and do vocals and guitar and try to have other people add as little as possible to the song. It is just a less is more approach. There were three songs that I think definitely benefited from that style. It just ended up being like a fun new way to try it out. When you have done seven records you just want to try to do things differently. You know, just new ways of doing things. It makes for more interesting songwriting. We are all happy about the whole experience.

Your music style uniquely falls into a variety of genres, ranging from goth-country to indie alternative.  Is the music of Big Dark Love similar, or does it take on a more specific category?

Oh I don’t know. I mean I just never really think about that. For me it is just about writing the songs, trying to make them as interesting as I can and trying to do something that I think is fun and different. I mean that’s always the goal, try to do something interesting. I think this record has some songs that sound more depressing than others. People can interpret the album however they want, for me that is always exciting. Our goal has never been to be a genre band, we are not a punk band, we are not a country band, we are not an Americana band. We just want to be whatever we feel like being at the moment. We just hope the people will go along with us. Our tastes vary and we are not trying to be a part of some specific scene.

Did this desire to not identify with one particular genre resonate when you all started playing together originally during your early college years?

I think that is kind of an approach that we tend to use a lot, to just be natural about things, don’t try to force it. Like lets just all get together, we are all a bunch of individuals who are into different things. There is no one saying “Oh I want to be in a band that sounds like this.” It’s just a bunch of people who are trying to make music for fun and I always hope it comes off that we are enjoying it and that we are doing it because we like it.

Every song is unique in lyrical content. How does the group collaborate and who does the majority of the writing?

Mostly me. I start all the songs and I have a presentable version. Then go into editing, and start seeing what it will be like to add in a person, just trying to figure out what the whole version of the song will sound like.

Well apparently we are just terrible at naming bands. People are always confused by our name. The first name is from an E.E. Cummings poem. It was like a Hootie and the Blow Fish type thing. People would always ask us “Oh who is Joe? I mean we made that name when we were only 18; we had no intention of being anything, but a band that played around for fun. Then we started to get some attention from labels and that sort of thing. We turned around a bunch of names and landed on Murder By Death, we had no idea how limiting it would be to have a name that was dark. At the time we were into bands that had dark names, we thought oh they are doing great. The two bands we listened to were Black Heart Procession and Godspeed You! Black Emperor.

We were thinking if these bands are doing well then our name should not be too bad. In the end there has been all sorts of crazy things, endorsements that wouldn’t work with this because the name is to dark. We have had shows where we were going to the play the after show and some sponsor was going to pay us to play the after party and at the last minute we were told we couldn’t play the show because the sponsor’s lawyers didn’t want to be involved with a name like ours. It’s totally crazy. It’s actually been detrimental for us also getting certain looks, certain publications just being weird about the name.

Obviously the band is influenced by literature and film, from the previous name Little Joe Gould and current name Murder By Death, respectfully. What are some other influences that band looks to when producing music?

We really think a song is a song, we never really have plan for what the band is going to sound like. On this record there are songs when I was thinking about Portishead when I was writing songs, or other songs I was thinking about David Bowie. Past records I’ve tried to avoid listening to any music at all while I was writing because I really wanted it to just come from me organically. Most of the time we really just try to sit down with our instruments and find something that sounds cool.

The band has been playing together for over ten years. Undoubtedly, touring has to take a toll?

We have played over 1,700 shows. Touring will wear you down, but in general we have decided to tour quite a bit less than we used to. This tour right now is 28 shows. We will probably have another 30 or more shows that we will play next year too. We like to play for the audience that wants to hear it. If we do less shows, it will allow us to keep playing in the future.

Basically when you get back from tour the house is a mess and you just need to take a minute. After coming home from a six-week tour, it is always kind of weird. You don’ t know what to do with all of your free time.

With 1,700 shows under your belt you had to have been to some awesome venues. What is one that has stuck out and been your favorite to play?

The shows we have been doing lately that have really stuck out are the shows at the Stanley Hotel in Estes Park, CO. It is in Rocky Mountain National Park. We just got back from the second year of what is now going to be an annual thing. It was the hotel that Stephen King stayed at and what inspired him to write The Shining. It is a haunted old hotel form the 1800s and I created this crazy concept concert that we tried last year and it was such a smash success that we ended up doing three nights each time. People dress up like flappers and I get to perform in a tuxedo. It is basically an awesome party, we play a long set and socialize. We had no idea that people would be as interested as we were. It sold 1,500 tickets in a day and a half, nine months in advance. It’s insane.

I’m really excited to start touring with O’Death. They put out the record Outside, two years ago. That record struck a note with me. I really loved it. I’m excited to see all the songs I know from that. I am also really excited for J Roddy Walston and The Business. They are awesome. They are T.Rex type of rock n roll group. They came to tour with us in 2008 and we have just been watching them get better and better. It has just been really cool to see them grow.

Don’t miss Murder By Death this Friday at the Roxy in Los Angeles. Get tickets here.