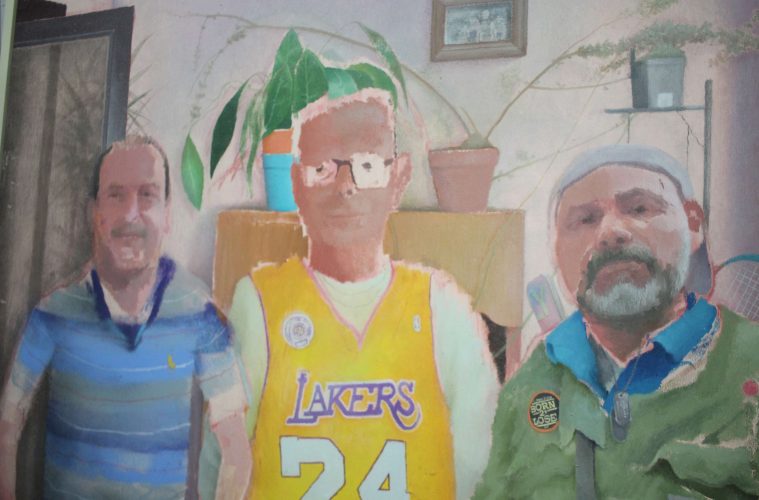 LA Through His Eyes: Painter Michael Alvaraez’s Intimate Relationship With His City

Michael Alvarez is still trying to process his surroundings. Born and raised in the East Los Angeles neighborhood of El Sereno, he’s no stranger to the sprawling city, but the ever-changing cast of people, places, and moments he encounters perpetually fuels new discovery in old cracks.

Taken from old family photos, or pictures he snaps while walking or riding around on his skateboard, Alvarez’s subject matter has developed out of his intimate relationship with his environment and surroundings. From famed skate spot JKwon Plaza or the hectic exit of the Hollywood and Highland Metro stop, to the intimate confines of a couples’ bedroom or a family picnic at the park, Alvarez’s focus is equally concentrated on portraiture as it is on the details within the environment that make the scene authentic and provide a glimmer of the whole story.

Conditioned by his time spent atop his skateboard and cruising the streets writing graffiti years back, Alvarez is an absolute observer, looking everywhere from the cuts to the open streets, and paying attention to the obvious and even something as small as a pebble on the ground. Skating has helped invigorate Alvarez’s senses; senses that he intuitively employs in his detailed and illustrious paintings.

We had a chance to hang with Alvarez at his Koreatown studio recently.

First off just tell me a little about yourself. Are you from LA?

Born and raised in Los Angeles, in El Sereno. I was always drawing as a kid. I think that’s just something that I took to really quickly. There was always a MAD magazine around and would draw cartoon characters. I didn’t really have any formal training until I was 17. My high school teacher recommended checking out Art Center because she that I was really into my artwork. She wasn’t too pushy, but it was kind of like, “This is what you’re looking for — check this out, there are options and that could set you on your path.”

That’s cool that you had someone that was even involved enough to recommend that path.

She totally gave me a guideline — she gave me structure, and I tried it out because I didn’t really have anything else to do. I was immediately hooked. Aside from skateboarding and graffiti, I was all about art – it’s a generational thing. You can probably tell there are tags all over my wall and there’s a skateboard over there. That stuff is still a big part of my life, but it was skateboarding culture – the graphics or even the cinematography, or magazines – really pushed my creativity. Even growing up in LA where graffiti and murals were on every street; all I had to do was go a block down from the house and I’d see a load of tagging or some crazy murals that would peak my creativity.

I feel you on how skateboarding peaks your creativity. My first introduction to art was through the graphics on the bottom of my brother’s skateboards and mine. I’m continually talking to artists who agree that skateboarding and art go hand-in-hand. They share a similar culture.

For me personally, with skateboarding, I developed an intimate relationship with my environment and surroundings. At first, my paintings were just characters and portraits, but now the environments that these subjects are in has started to mean a lot more. I’m more concerned about the details of the environment and what kind of makes the scene itself; whether it’s a big and flashy detail or something smaller in the cut. I guess with skateboarding and graffiti, you are looking at the cuts and you’re looking at everything, no matter how big or how small. You’re going to look for a pebble in the ground because that pebble can cause you to fall. While you’re looking there you might see some tags in the wet cement. Skating helped invigorate the senses, with trying to stay alert and aware. At first, it was being aware of my surroundings, but now it’s being aware of everything I come across because it’s all information that can help us grow.

You mentioned that at first, your work was mostly portraits. Can you elaborate on when the shift from portrait to more narrative painting?

The portraits were simple in the sense that it was just a face or a portrait on a background. I think that came from a few different things, one being from doing graffiti. I would do letters and traditional graffiti, but I would do a lot of characters too. I always loved characters and that led me to start getting into foundational painting and learning about painting in general. Magazines, video games, and lowrider art where it is just ballpoint pen shavings, that is what I thought art was. When I started school we were learning about head painting and formality, so I think I was obsessed with the character itself and kind of disregarding a narrative or a story about the character, like where do they come from and where do they exist. So I think learning and nerding out on more painting and then wanting to try some new things started leading to like figures and environment and the relationships. If this [points to a painting on the wall with a woman setting up a picnic at a park] were years ago it would be a face and maybe like some goofy decorative graffiti clouds.

Do you ever look back on that work?

Yeah, some of it – I still have two or three graffiti albums. I know I have three or four more that I stashed at my grandma’s house that might have gone missing. I’ve been looking at them more because I’m not actively painting graffiti; I’m more obsessed with graffiti as a fan than as a participant. I kind of had to stop obsessing about graffiti to really evolve in my painting and just kind of jump into it. With some of it, I’m like, “Whoa I can’t believe I pulled that off,” the other stuff it’s like, “Holy shit this is so embarrassing.”

Your pieces now definitely create an environment around your subjects. How important is the environment to telling a subject’s story?

I think it’s becoming more and more important. I’m sure there will be paintings where there may not be an environment or some kind of narrative element, but it is kind of fun to just start telling stories about the main character and the other people around them.

I would say a good amount come from photos that I’ve found, like family photos. I’ll try to paint my way into understanding this memory or environment or nostalgia. Some work is based on ideas or experiences, and in those cases, I’ll go and take photos of an environment, either when it’s hyperactive or when it’s still so I can have every aspect.

So this piece looks like it’s referencing a Hollywood scene.

This is off the Hollywood and Highland exit on the red line. I worked right down the street from this exit at an artist’s education nonprofit called Artworks LA. I would take the Hollywood/Highland red line every day to get to work for a year. I would get to work at the same time every day and when you’re going up that gnarly ass elevator the first thing I see is that Marilyn Monroe impersonator because she’s so white. She’s so bright. She’s like shining, it’s a fucking trip. She’s so still I can’t tell whether she is a mannequin or not. It tripped me out that aside from her being so still and bright, everything is totally chaotic. 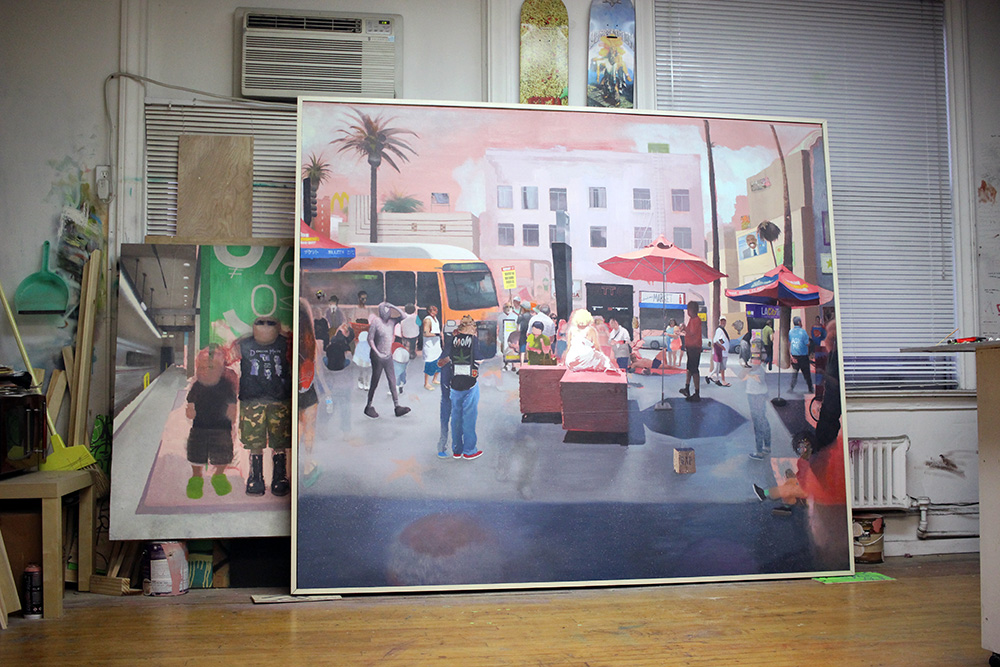 There are so many different things going on at once. I’m particularly interested in the people that are a little more faded, almost as if they are invisible. What’s that significance? Why do you paint certain people like that?

I think I’m trying to start messing with motion. There are some people that are still, but very hazy. I don’t even know how or why it makes sense, but I started playing with ghosts of photography.

The blur or ghost-like quality resembles a photo taken with a long exposure.

Yeah! So I guess it references photography and me trying to play with levels of transparency. I want to paint what’s behind a subject, but I still want to have them exist.

Almost like there was a person there at one point, but they’ve moved since.

Yeah, they’re levels of ghostliness. Everybody is here, but it’s almost like I’m even referencing video games, like if you’re at 100% you’re going to be in full view, thickly painted, but if you’re at 25% you’re more see-through, a ghost of what you used to be. I think most of it comes from motion and activity when there’s hyperactivity. people are moving so fast it kind of feels like a blur. 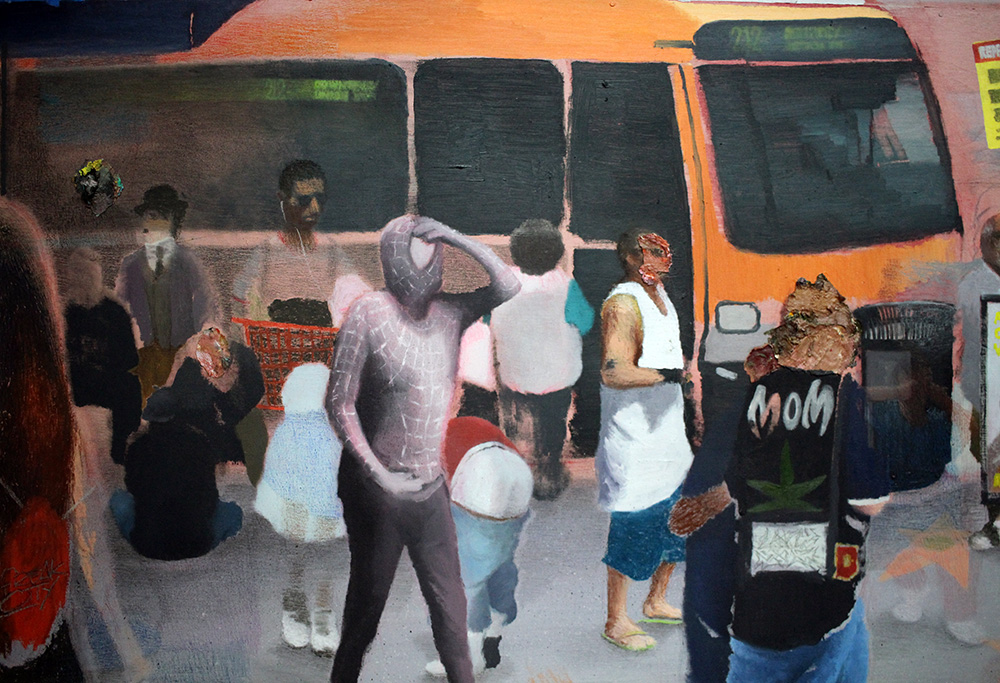 With a lot of your pieces, I feel like I’m looking through glasses that aren’t right for me; I can make out people in front of me, but they’re a little blurry or fuzzy around the edges. How did this style develop?

There are a few different things that got me into that, the first is playing with different mediums. Most of my paintings are oil and spray paint, and maybe some oil pastel. While I was studying in school I would paint sharper and crisper, more controlled. But people don’t look that way to me. To me, no one is high definition. The main reason some areas are in focus and some areas are not is I think that’s the way things feel and look to me. Say, for example, you’re walking outside and there’s so much activity going on and there’s so much to focus on. There may be this main thing going over there and there may be some activity going on in the peripheral, just trying to process the reality in front of you. For me, it feels a bit like a hallucination.

I feel like photography plays a large role in your work. How are the two connected?

There are definitely references to photography, what we were talking about where things are painted to look overexposed or how movement is documented in a photo. I guess with the painting I am just trying to document some kind of moment, and it could be how a moment is played out over time or not, that’s the reason why I try to utilize blur. For some paintings, the scenario or scene could have existed over the span of three or four hours and I’m trying to capture everything I can that occurred in that amount of time.

That’s a really good way of explaining the composition of your paintings.

That’s kind of what bugs me about painting too. It’s one image, and it’s like, “Damn, how do I capture multiple time frames of information.” I like photography a lot. I can’t say that I am a connoisseur, but street and documentary photography helps us learn what exists in different walks of life and different locations. 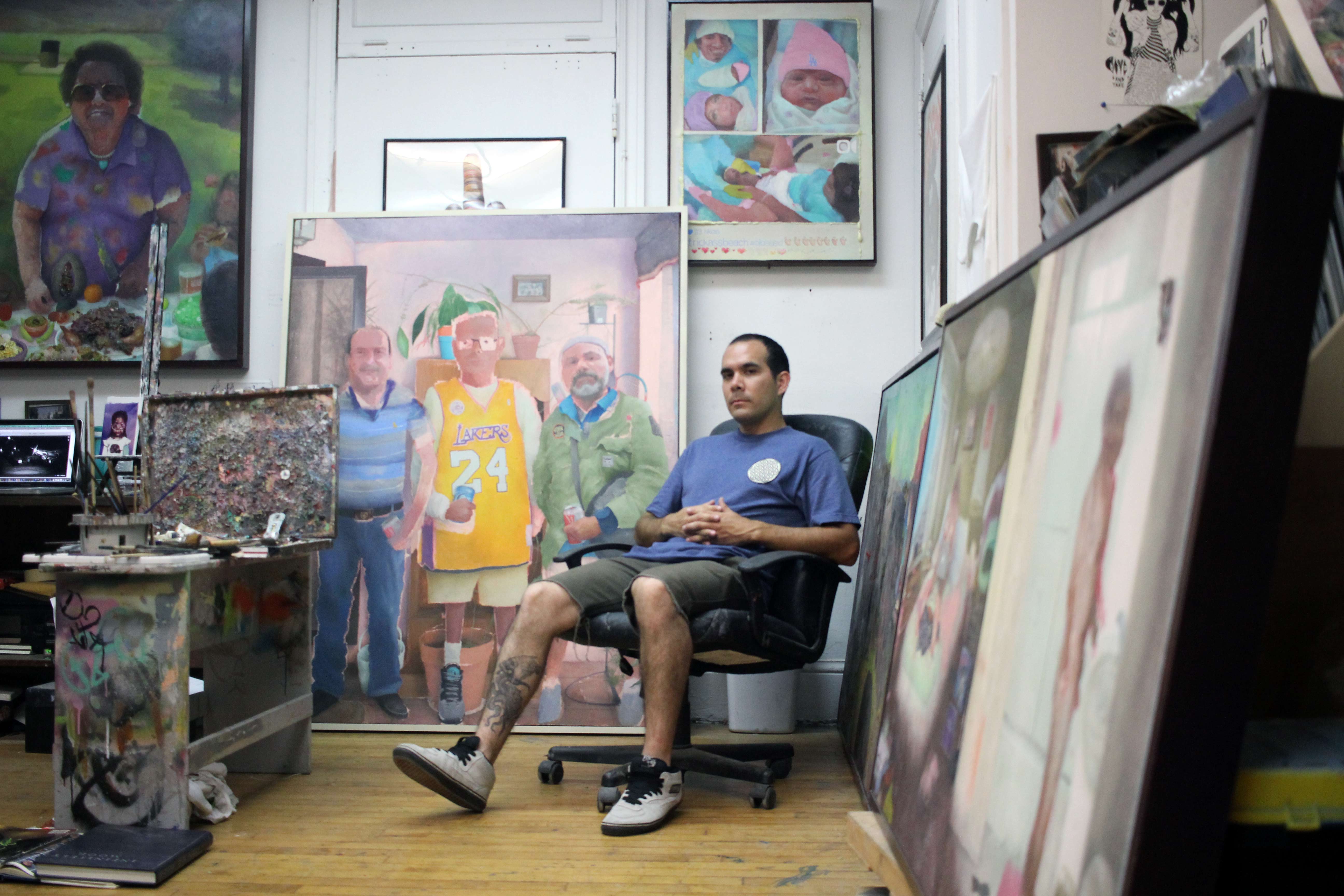 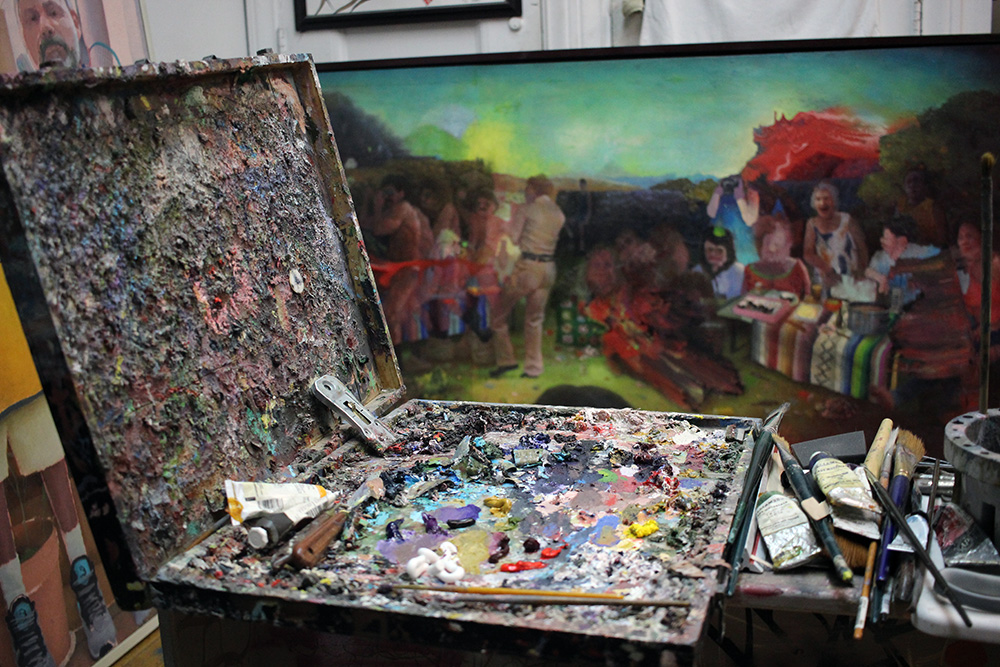 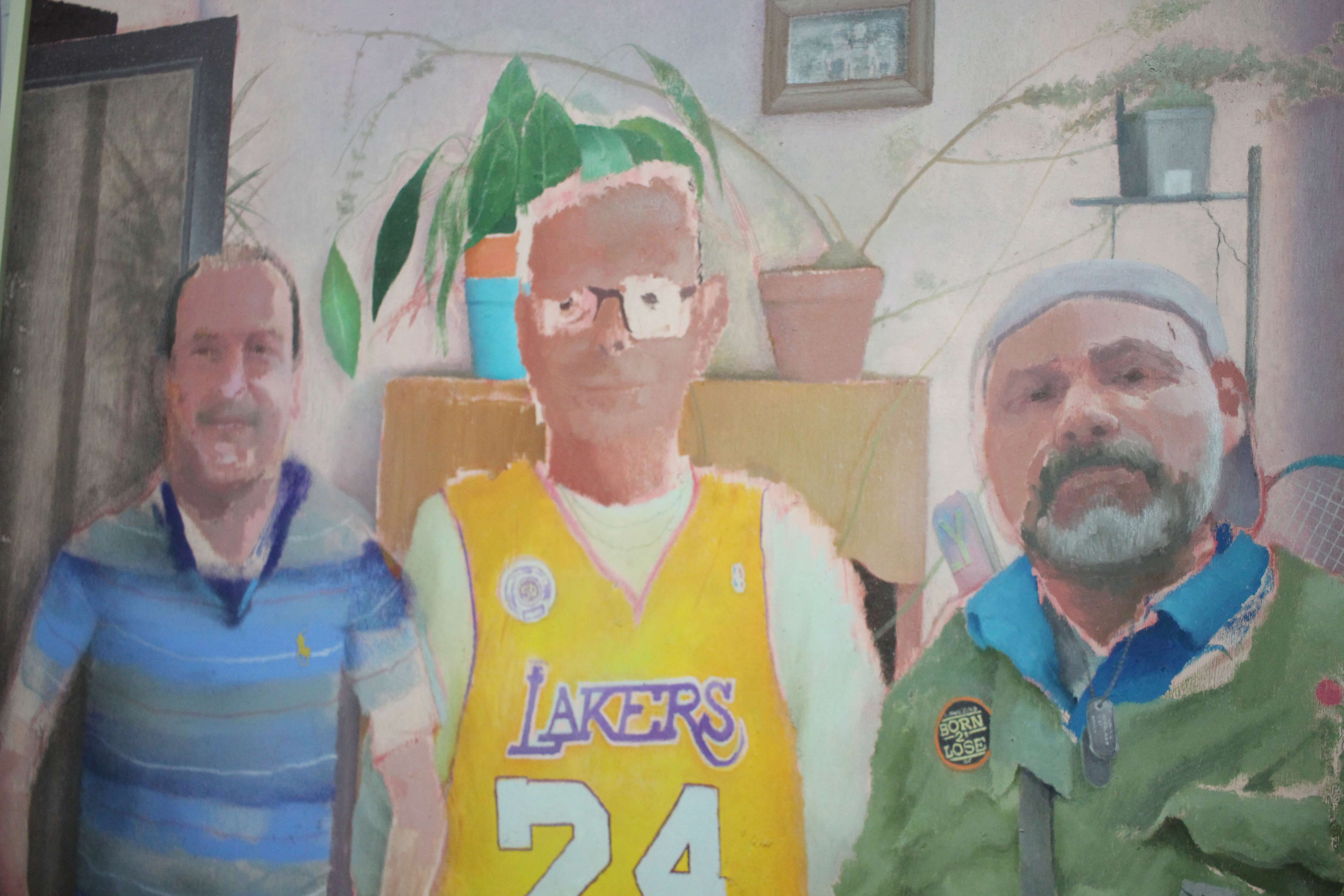 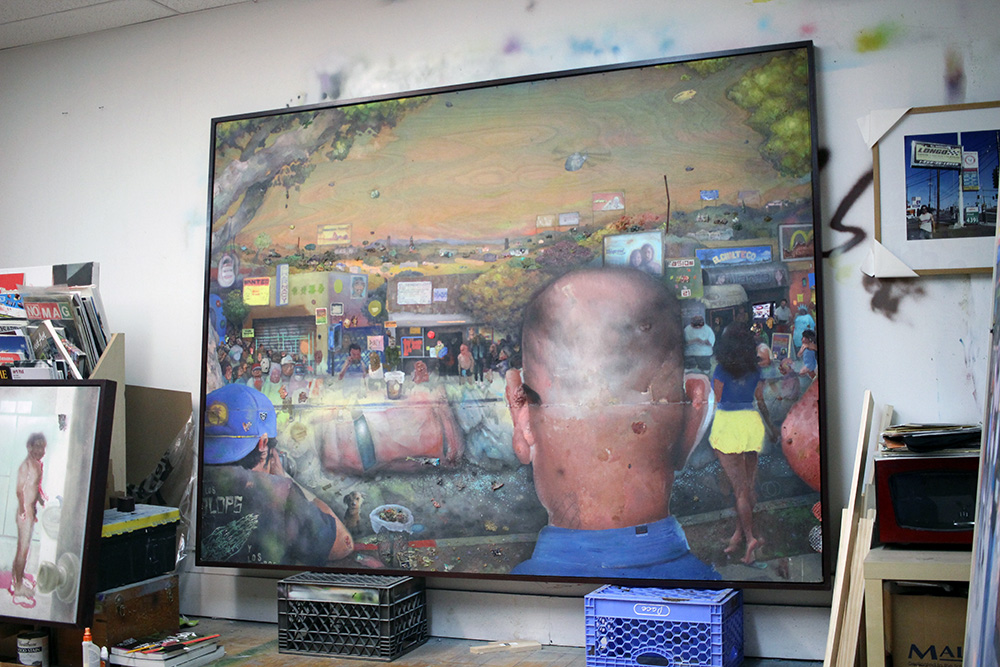 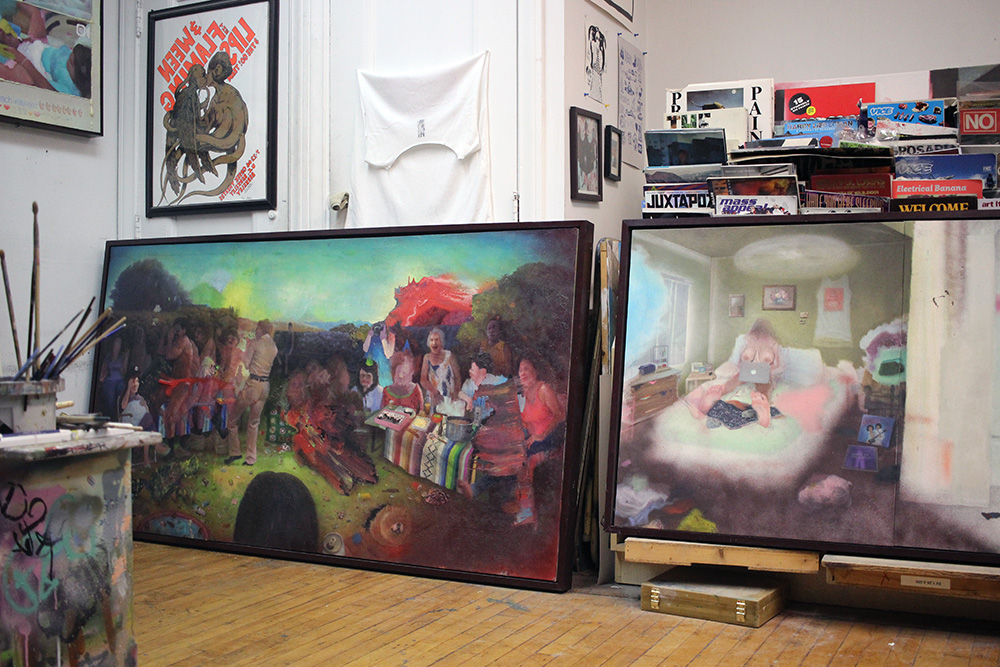 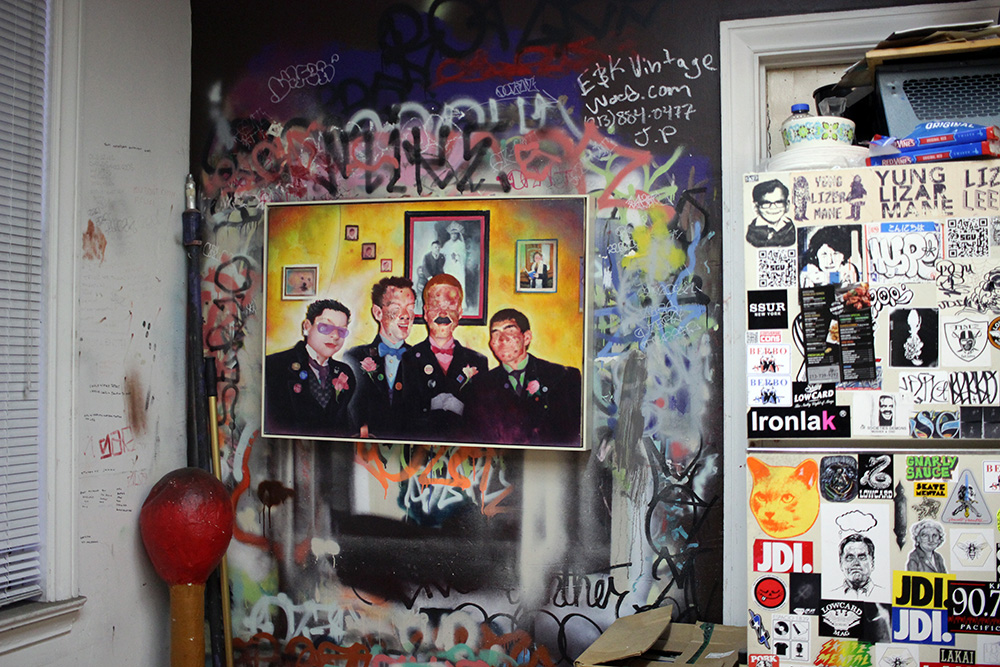 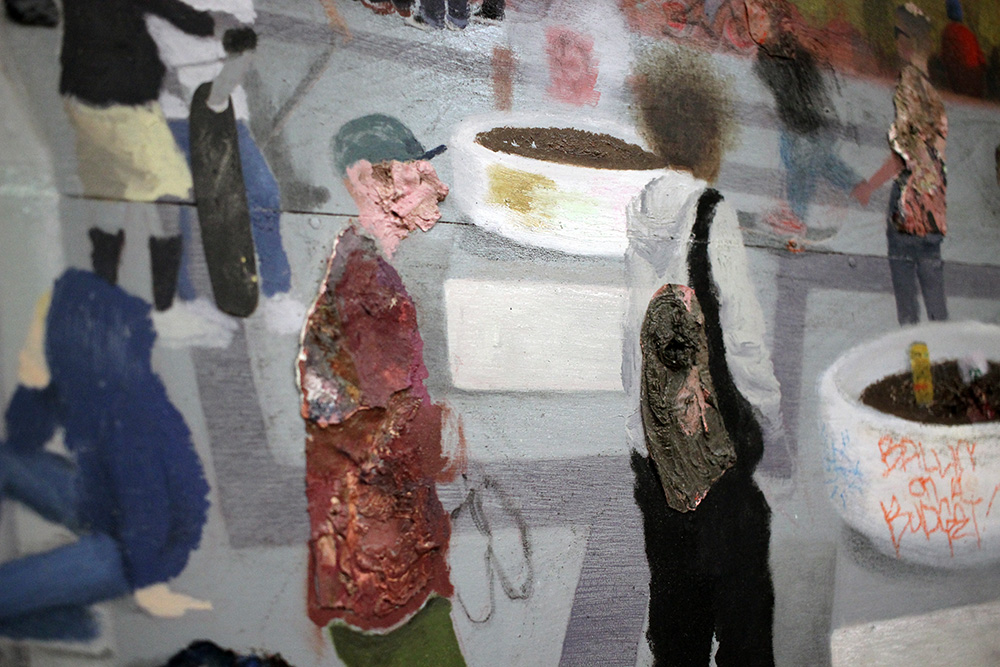 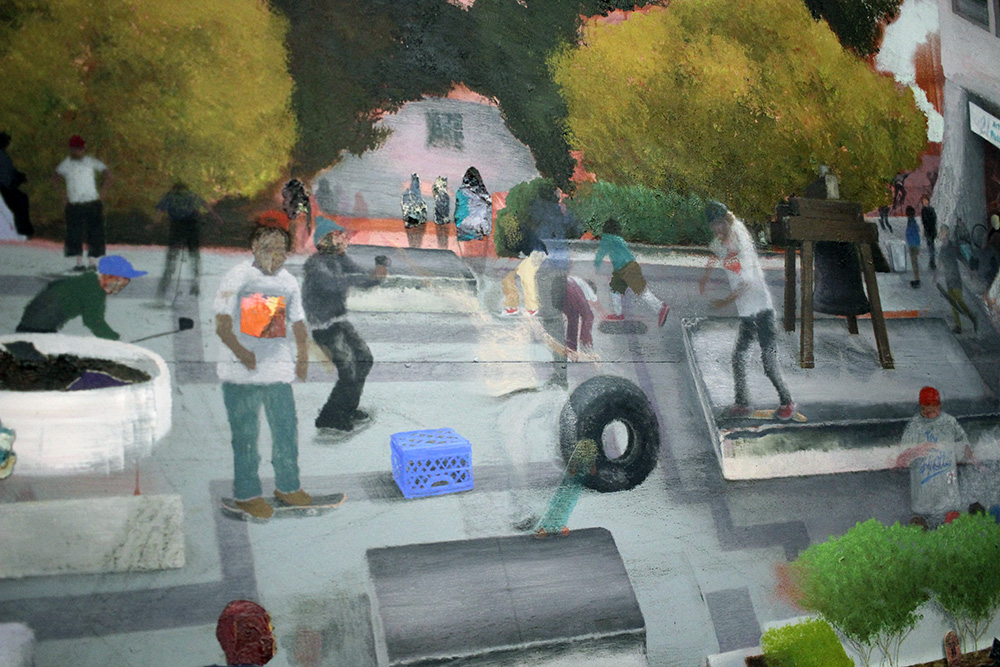 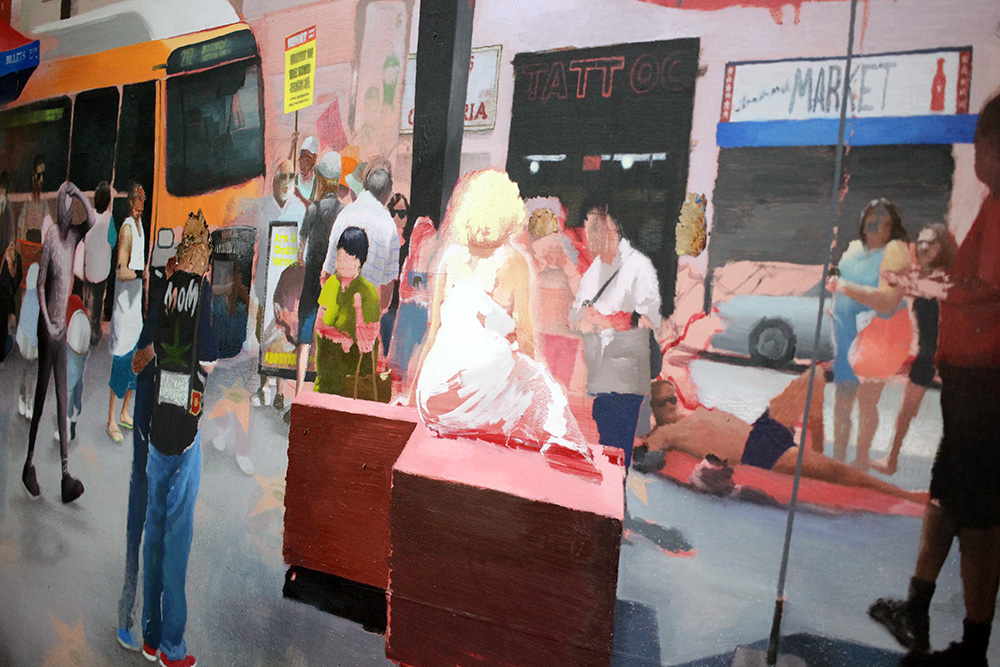 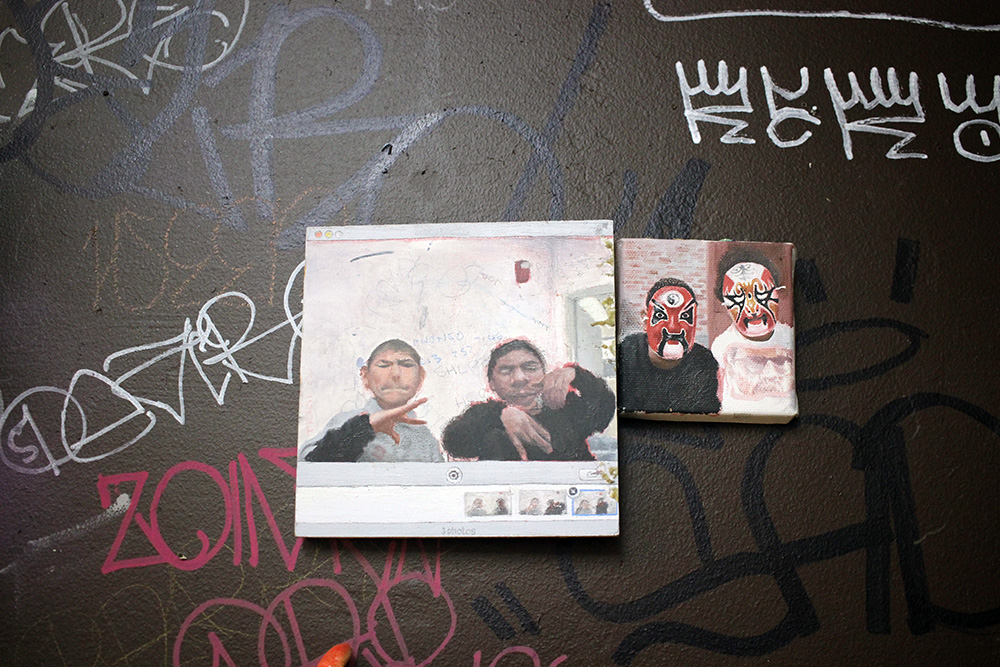 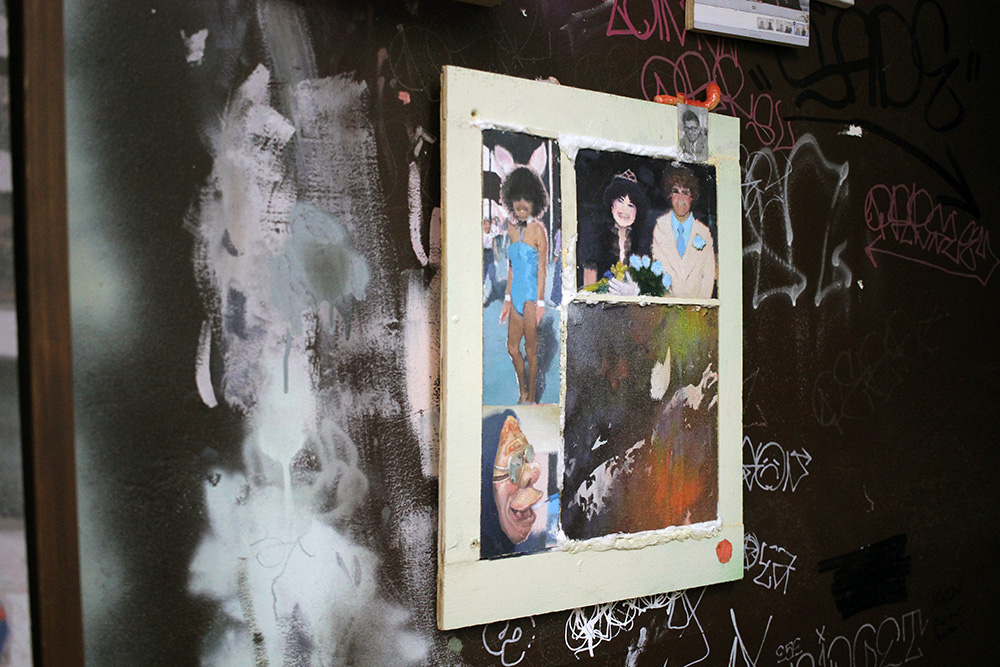 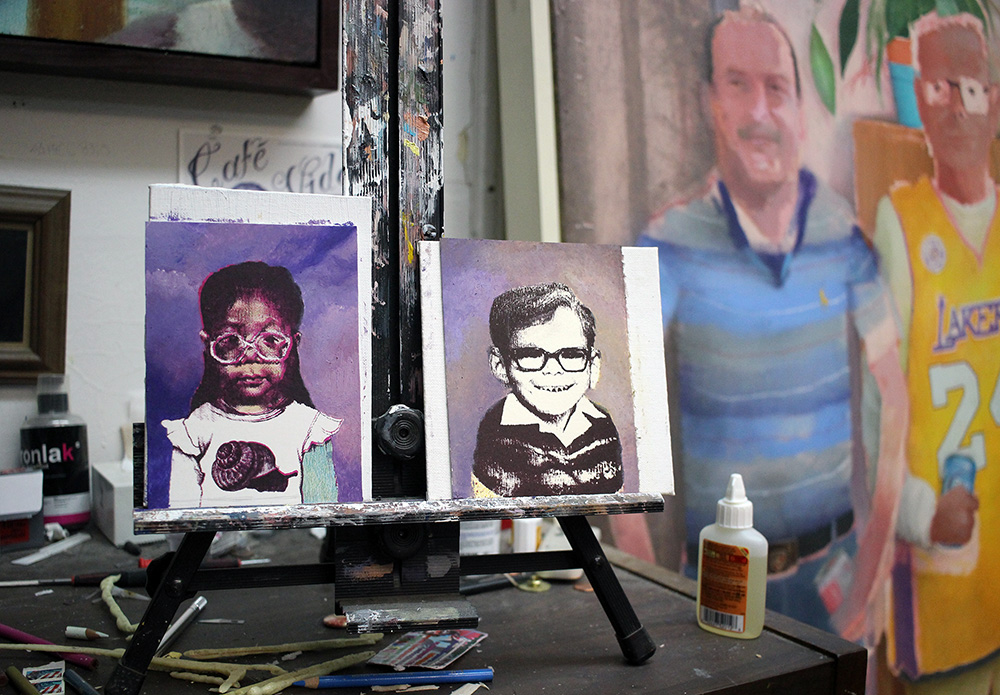 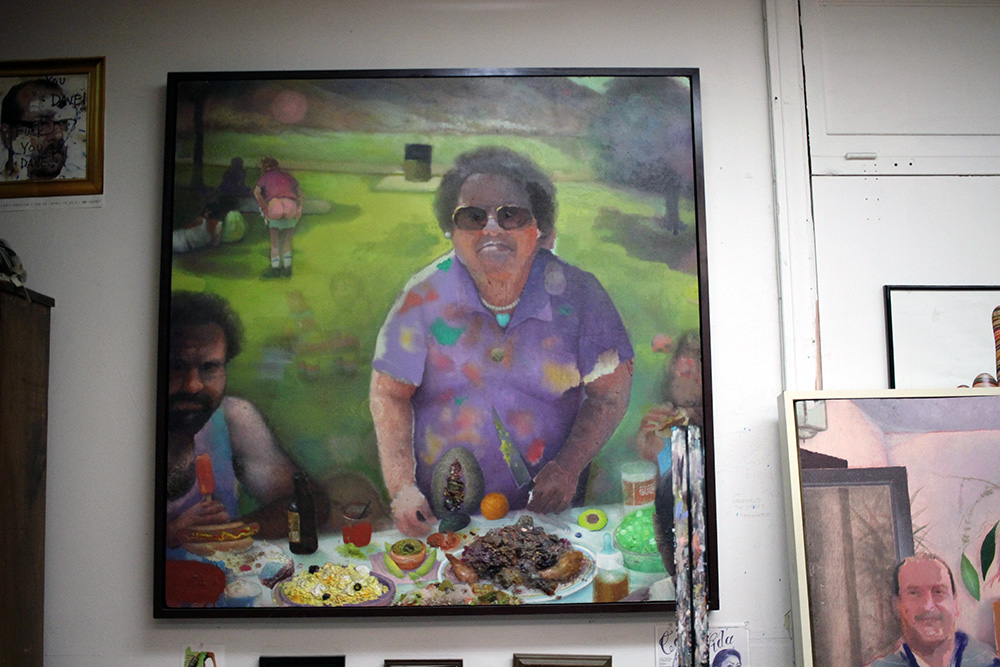