Photography, when done right, can be an insight into worlds we’re not familiar with; they have the ability to connect different people of different cultures, and if only for a moment, we’ve made an emotional realization. We’ve all experienced a time where we’ve peered into the eyes of the subject on paper, or more likely on the computer screen, and felt something nearly indescribable. New York photographer, Sophie Barbasch, has this ability to capture the gaze that so perfectly encapsulates such a particular feeling. In fact, her project Military Logic, is entirely focused on those instances of unaware and unexpected vulnerability.

While on a trip to Brazil, Barbasch had the opportunity to be a fly on the wall to photograph a military school, hence the name Military Logic. Often the military brings up feelings of repression and stoicism, but what Barbasch found in the fresh faces was quite the opposite. She saw tenderness, warmth, and love as glances were exchanged back and forth between the kids. In short, Barbasch realized the children didn’t fit the meaning behind the word “militant;” they were just children.

I had the chance to speak with the very focused Sophie Barbasch about the project detailing her expectations about the politics behind everything going on in Brazil. Which she can explain a hell of a lot better than I can. 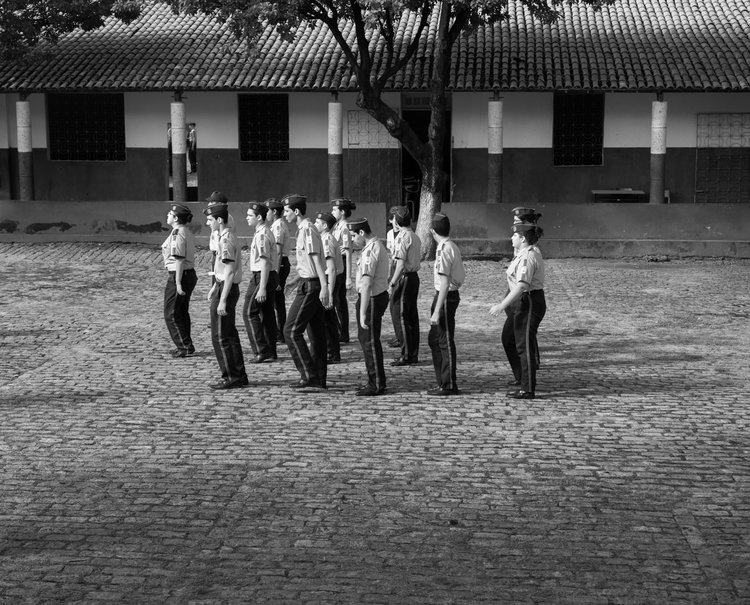 Your project, Military Logic, was shot in Brazil at a military police school around the time of Dilma Rousseff’s impeachment. Can you tell us a little bit about why this interested you so much and what you expected to get out of the experience?

It’s hard to summarize all the elements and forces at play in Brazil right now that made me interested in the school, but I will try—please excuse the oversimplifications!

Fortaleza is one of the most dangerous cities in Brazil, which impacts daily life in a profound way. There is extreme social inequality, which fuels crime and creates fear, as well as a desire for order. Politically these tensions play out on a large scale as parties struggle for power. While it would be incorrect to say that PT, Dilma’s party (the worker’s party) is purely devoted to social equality, their policies do help the poor much more than most, if not all of the other parties.

In my opinion, Dilma’s impeachment created a free-for-all, or power grab, that will have negative consequences for democracy (which is still young in Brazil). Even though she was impeached through a democratic process, I think she was removed more for her economic policy than for actual wrongdoing (nearly all her colleagues are more corrupt—this has to do with the “car wash” scandal that is still roiling the country). Michel Temer, her replacement, wants to make the rich richer at the expense of the poor, which seems like a disastrous approach—one that will only fuel inequality, fear, and crime. 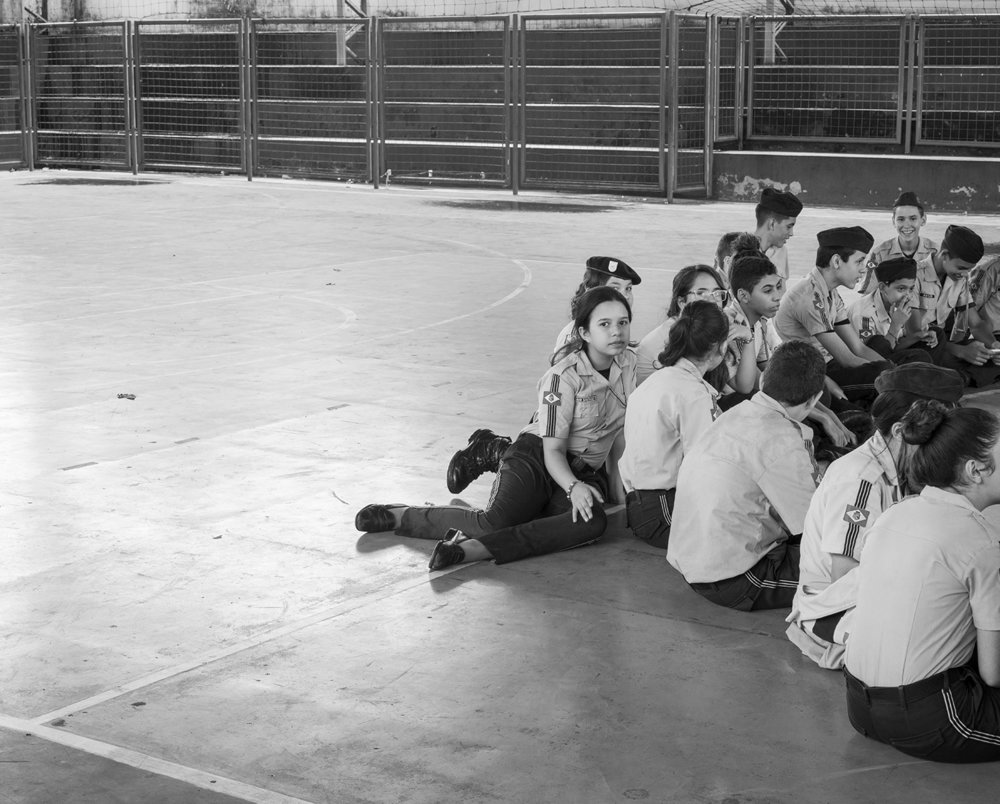 In this space, a far-right candidate, Jair Bolsonaro, has gained increasing popularity. He is a former military officer who basically hates anyone who is not a straight white man and openly calls for a return to military dictatorship. Temer recently deployed the military in Rio, perhaps trying to capitalize on this perceived desire for a strongman. Bolsonaro is like Trump except for being much more extreme when it comes to his views and policies.

So all these things were on my mind when I heard about the military police school—social tension, misogyny, a longing for order as a solution to bigger problems, etc., and I wondered—what does it really mean to militarize? I think it means to minimize subjectivity, autonomy, and freedom of thought. It means to stop fighting for the rights of marginalized populations—if not to actively make life harder for them. It wouldn’t solve any of Brazil’s problems.

I went into the school thinking the students would be more militant—but they are just normal, sweet kids. (It’s important to mention that the school is the best public school in the area, so while some people come from military or military police families, others are simply trying to take advantage of the strong academics.) 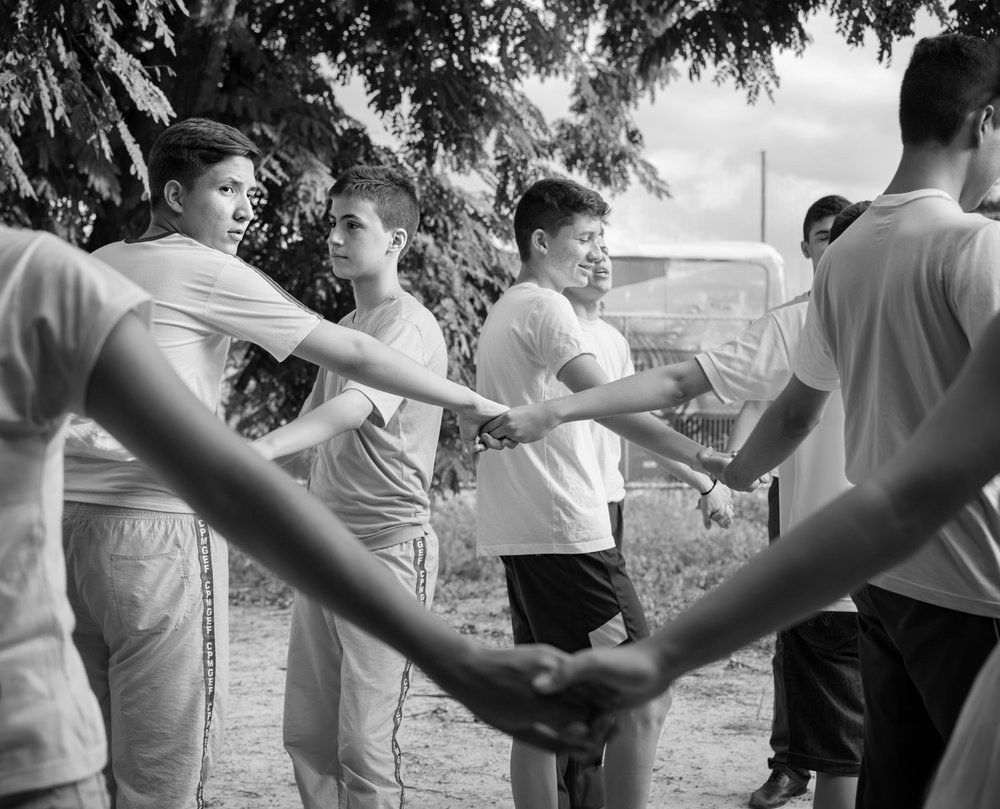 Like you mentioned, the subjects in your photos are often caught looking at someone. In some photos, I may even describe it as a teen gaze. You also call it “disruptive,” can you explain what that means to you?

Yes, lots of teen longing! It’s true, a lot of the looking had nothing to do with politics.

When I describe looking as a subversive, or disruptive, act, it has to do with subjectivity and autonomy. Military protocol is all about following orders. It’s not about individual opinion, experience, or expression; it’s not about open-ended observation or critical analysis. This is reflected in the controlled body that only looks ahead. So someone who breaks this form—who moves the body differently, who looks around—is already breaking with protocol and subverting the norm. In military formation, the soldier is watched. She doesn’t do the watching. The visible person, or the surveyed person, is not as powerful as the one who surveys. It ties back to Foucault’s idea of the Panopticon. Architecturally, the school is laid out to maximize visibility. 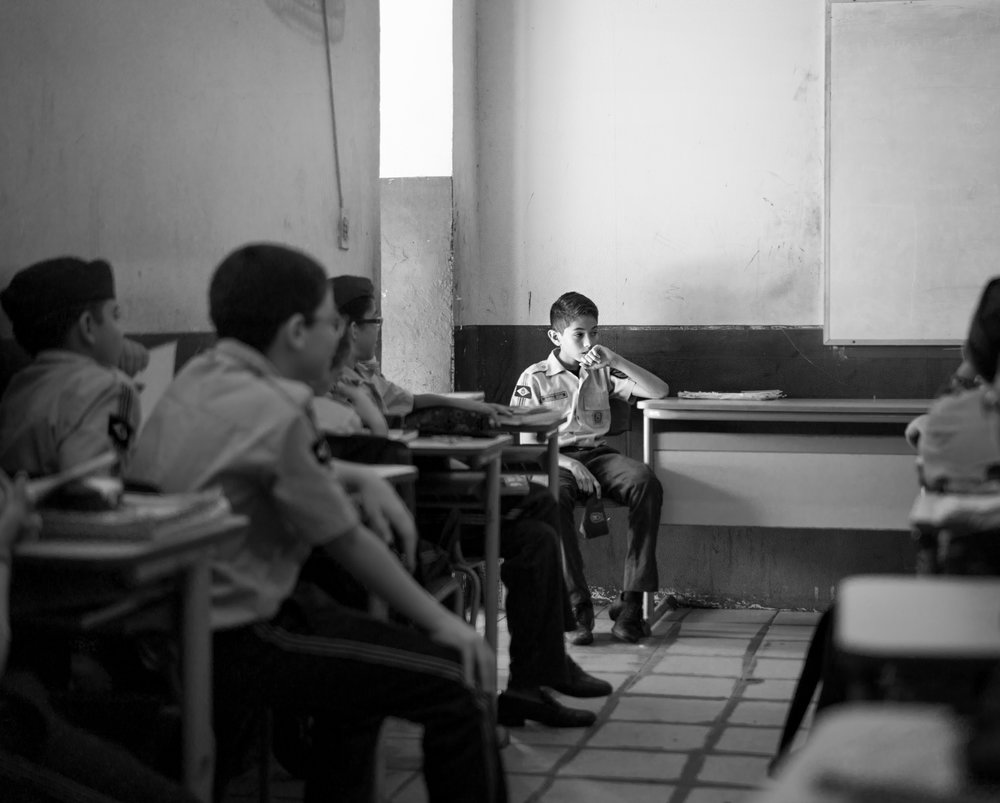 When someone hears the word “military,” it brings to mind a lot of different words or ideas, but the first words that come to mind are strict, discipline, etc. When you saw the kids interact with one another was it different than what you initially expected?

Yes, it was very different. It’s a stereotype that I find to be true—Brazilians are much more affectionate than we are, so even though any kind of touching was technically against the rules, they were kissing and hugging each other all the time.

There were a few pictures that really stood out to me and one, in particular, is one of the students wearing a white dress. It’s visually and emotionally a lot different than any of the other photos. Can you give us some background info about the picture and why you decided to include the shot?

That was during a theater class. A lot of the guys, including the straight guys, had fun dressing up. I think that cross-dressing is more of a statement in Fortaleza than it is in NYC, for example. It’s a moment that defies the school’s behavioral code (if you are outside of a classroom, you have to be in uniform–but even though that was inside a classroom, no school officials would have been pleased to see that). What struck me was the ease and comfort with which he wore that outfit, and also the white lace next to his skull ring.

As I mentioned above, the patriarchy was on my mind, both as it related to the school and also more broadly as it related to Brazilian culture. I guess it is always on my mind, regardless of where I am. But because of all these political currents, the already-macho culture there felt extra stifling at times. The white dress is supposed to push back against that a little bit, I suppose. 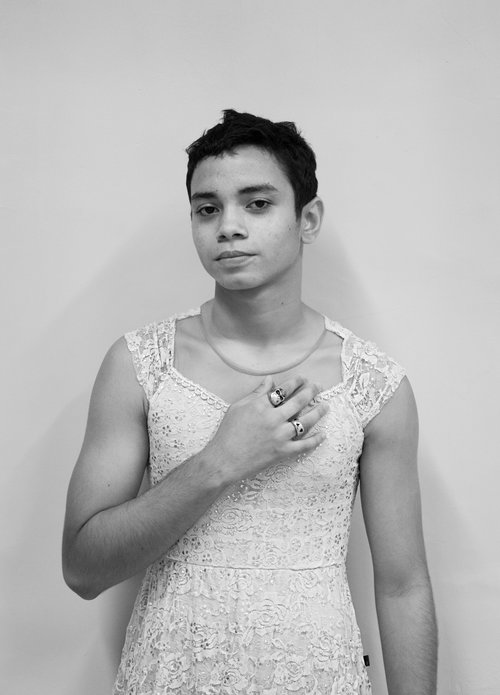 I’m sure being in such close, personal corridors with these students, a particular bond is developed. Did you get a good gauge on relationships there?

I was an outsider, so I’m not sure about a lot of the relationships! Sometimes it’s not clear if what you observe is substantive or just an arbitrary, fleeting moment between people. Some of it was probably totally accidental. A lot of it is probably my own projection. But I kind of like guessing and making up my own stories.

What surprised you most while on your trip?

Did you walk away with any piece of knowledge you’d like to share with people in the United States? With our political climate, any piece of wisdom is greatly appreciated.

I think that protesting is more integrated into Brazilian culture than it is here. It is more woven into daily life. Sometimes a protest is an event, sometimes it’s a little gesture. It doesn’t always have to be heavy. A lot of the political protests turn into dance parties. It’s deceptive: it reveals more about the quantity and duration of political struggle than anything else. I think here in the U.S. with Trump, we are approaching a more Brazilian kind of relationship to protesting—i.e., show up and fight, but also laugh so you don’t implode. 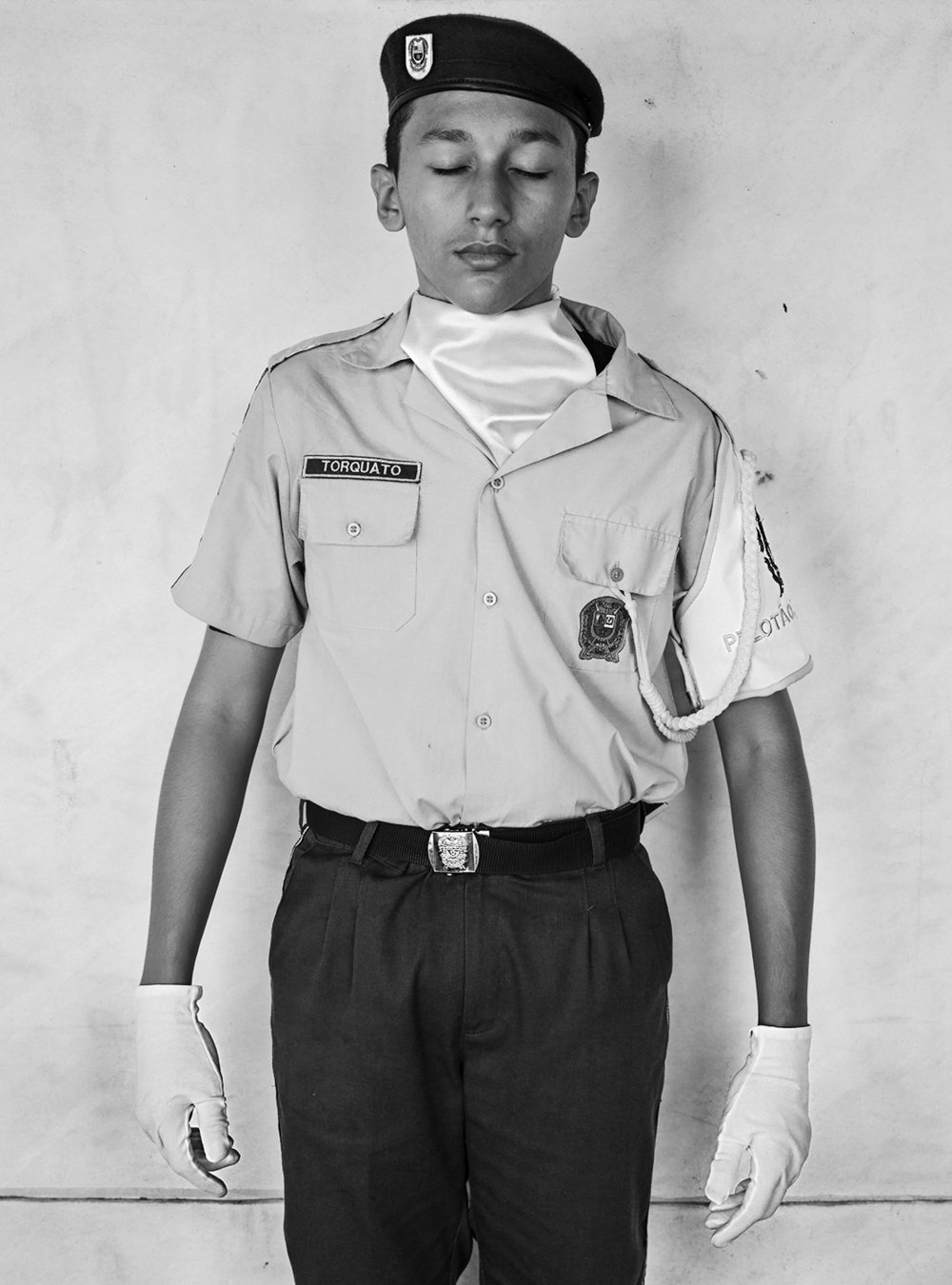 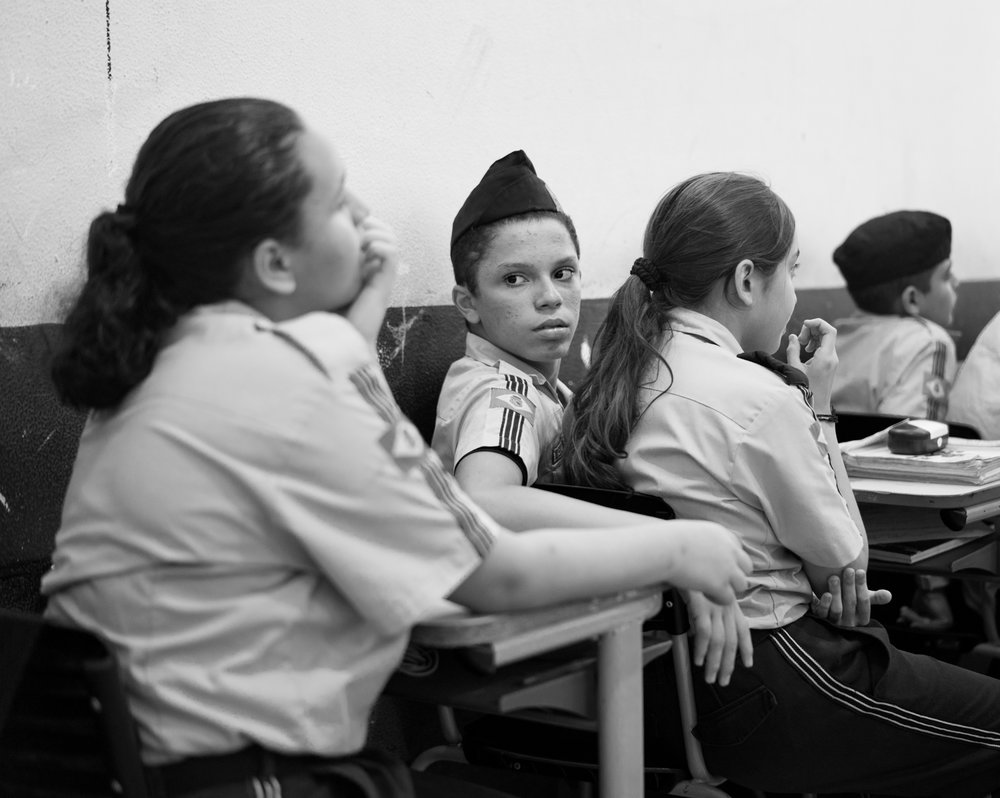