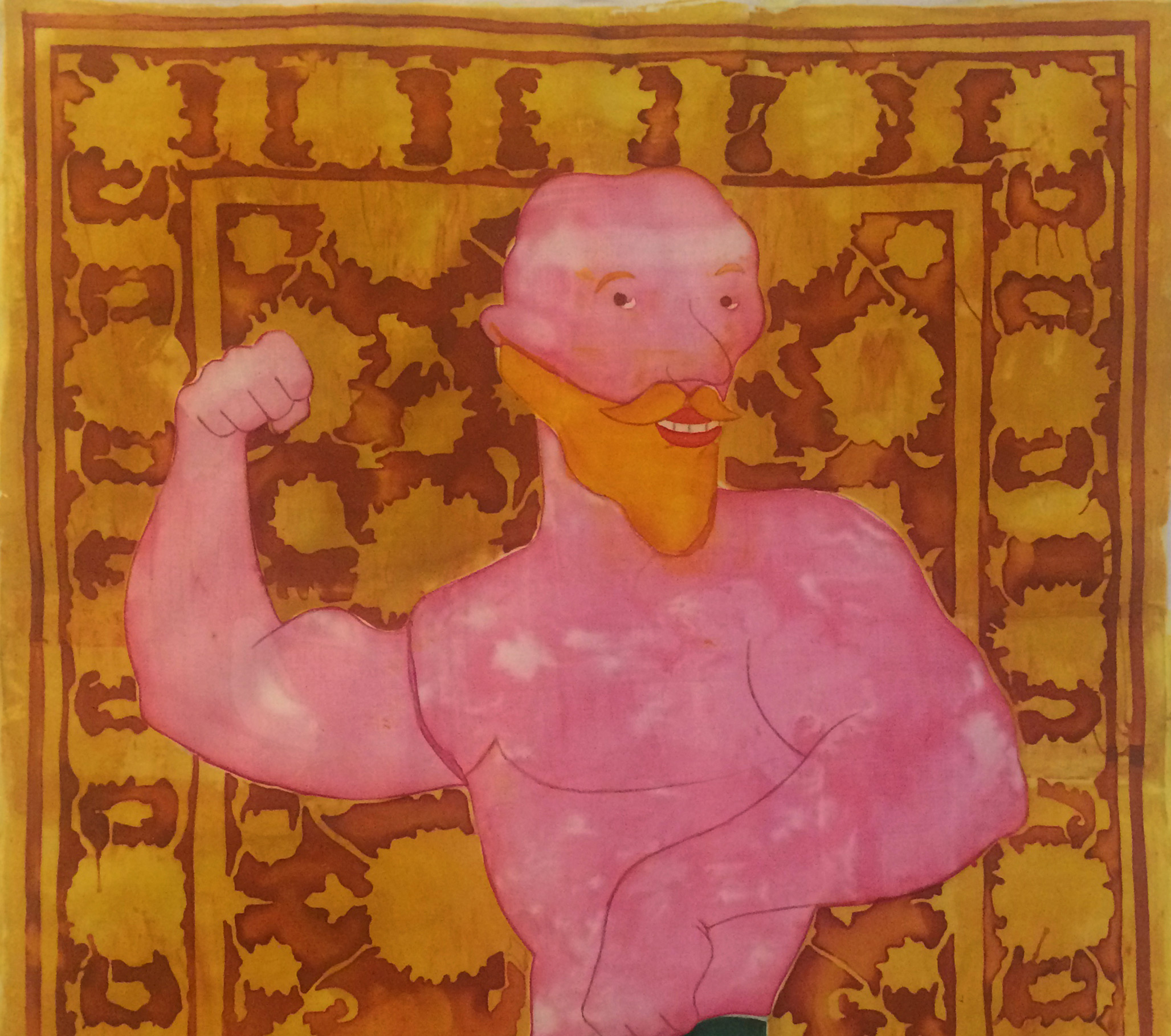 It wasn’t too long ago that artist Orkideh Torabi decided to consciously remove women from her paintings. Torabi’s work has largely functioned to draw attention to the personal, political and social issues women face in patriarchal societies, however in an attempt to subvert stereotypes she wanted to tell this narrative without having to visually depict women. Torabi instead employs the approach of examining these patriarchal societies and the men that inhabit them, from the perspective of a woman.

Torabi’s newest collection entitled, “New Paintings,” lampoon patriarchal society, depicting men as absurd clown-like figures and caricatures of typical male archetypes. The figures and portraits are playful and use humor to represent a range of different types of men who have somehow mentally crossed Torabi’s path. By portraying her male subjects with cartoonish candor, she strips the male oppressors of their power by undermining the culture of machismo, and mocks the fragility of masculinity in societies where women are seemingly absent. From the way she depicts her subjects – poses them, dresses them, obstructs their looks – Torabi emasculates them and assumes their power.

Using a technique that begins with painting on a silkscreen with fabric dye, and then transferring the image onto the canvas using a squeegee, Torabi generates lurid and imperfect renderings of her figures and patterns that are integral to her overall process. We had a chance to talk with Torabi prior to the opening of her new show “New Paintings,” where she told us about the inception of the new series, her unique process, and how her portrait paintings continue to evolve.


Tell me about “New Paintings.” How was the show conceived? Over what period of time did you create these works and how do they reflect or continue a particular narrative?

About a year ago, I made the decision to omit women from my work because I frequently found the images I produced were misinterpreted. I wanted to turn my back on stereotypes; as such, I decided to portray the life of women through the male form to represent patriarchal societies. Throughout art history, we typically see women depicted from the perspective of men. This collection seeks to turn this approach on its head to examine men depicted from the perspective of a female. I opted to portray men as ridiculous cartoonish figures because this allowed me to challenge male authorities and comment on patriarchal societies and masculine identities.

I have purposely chosen humor as the language of my work because humor can provide a very effective avenue through which serious topics can be examined. In fact, the aim of this collection is to mock the complex and fragile masculinity of patriarchal societies in which women seem completely absent.

In what ways does this new body of work build on the portrait paintings in your recent show at Western Exhibitions? How have the portraits evolved since that show?

The concept that underpinned the works that were displayed at the Western Exhibitions show was the desire to create a space in which the viewer is surrounded by male portraits. Most of the portraits in that series of work are looking directly at the viewer, returning his or her gaze. This approach was based on the idea that all portraits can be seen and comprehended as one work and as a whole. Through this approach, each person can create her/his story.

The new body of work is based on a very similar concept; however, the portraits are getting more complex in expression and more detailed. I started developing the characters of men as the protagonists of my work. The figures and portraits represent different types of men who have somehow mentally crossed my path. They came forth from my imagination without any references. In fact, it is likely that they are archetype figures of the people I have met during my life. When I paint them, I imagine myself as a director who gives them the right pose. The pose that we take on as individuals becomes our identity. By directing the pose of the men I paint, I take their power. Through presenting them in a disfigured form, I demasculinize them, and through repeating these images and setting the subjects on an unexpected stage, I allow myself, a female, to possess their power.

I’m really fascinated by your process and the materials you use to create your paintings. Can you fill us in on your process of painting on a silk-screen and applying to canvas, and explain how this process is integral to your work and the finished piece?

One of the fundamental characteristics and qualities of printmaking is the element of chance. I paint with fabric dye on the screen and then use a squeegee to transfer the image onto the fabric. I apply several layers on the fabric and continuously shift the images. There are a lot of chance aspects to the placement of the images. This is conscious and plays a significant role in my use of print as a medium.

In printmaking, fabric dye strokes are direct, and the medium is not slow drying like oil paint. This makes it harder to rework or change the piece as it unfolds. In fact, the water-based dye color bleeds instantly into the surface of the fabric to create an indelible stain or transparent wash. For me, preserving the initial movement of the strokes is important; as such, I prefer to leave the initial marks of the brush on the fabric rather than reworking the surface.

What do you think has been the most apparent evolution of your work recently?

There is more humor and playfulness in the new body of my work. The activities in which the figures are engaged are becoming somehow absurd. I have developed my own printing technique that involves printing various textures and images by hand and then overlaying additional images onto these. This approach has allowed my work to become denser and more

colorful. I put the figures in a space that is decorated with Persian pattern. I make a reference to Persian miniatures within the new body of works. Every element of Persian miniatures is decorated with very beautiful patterns. The depiction of Persian pattern alongside images of contemporary men in my paintings serves as a reminder of our relationship to the past; the past and present become interwoven. 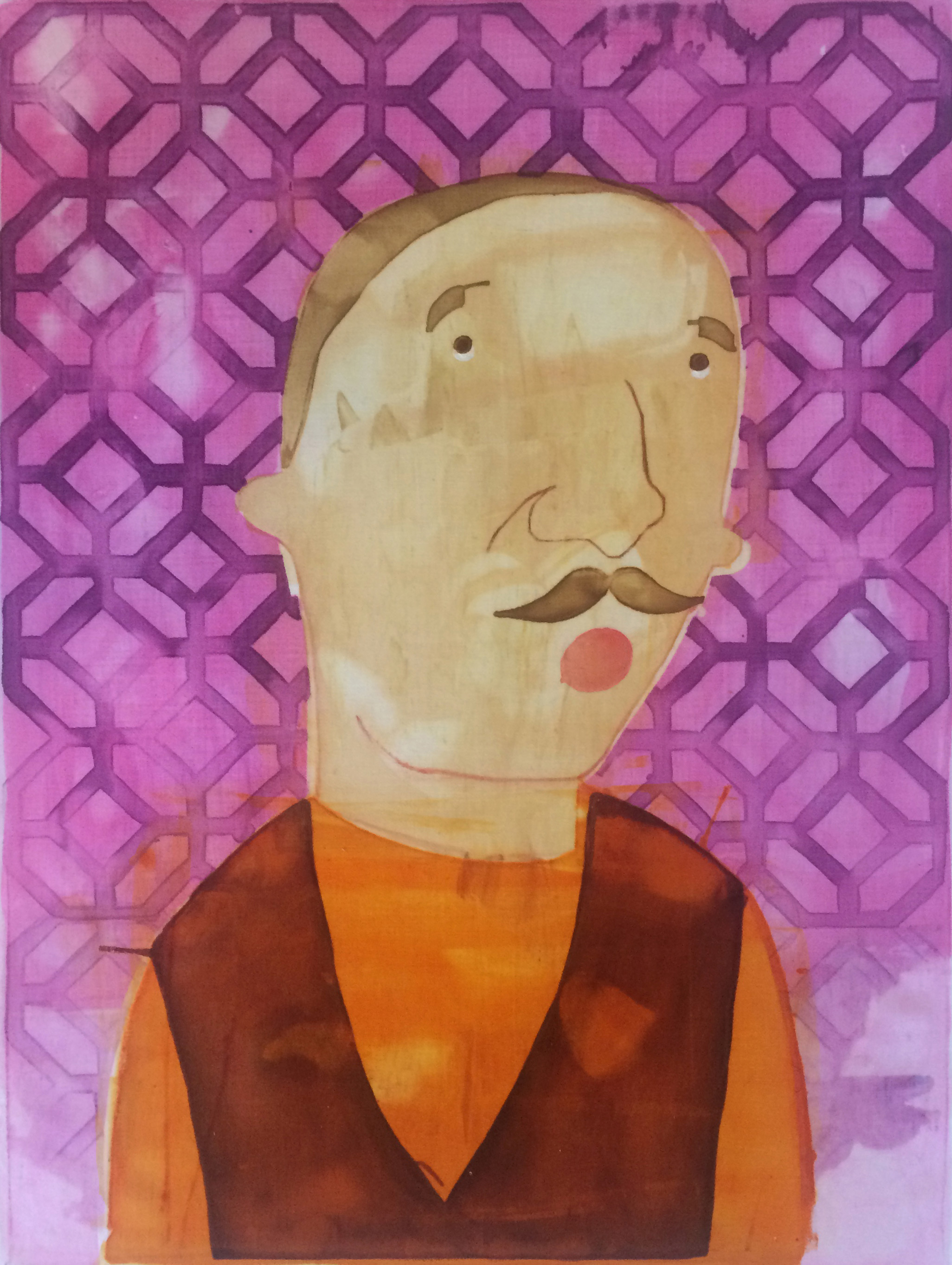 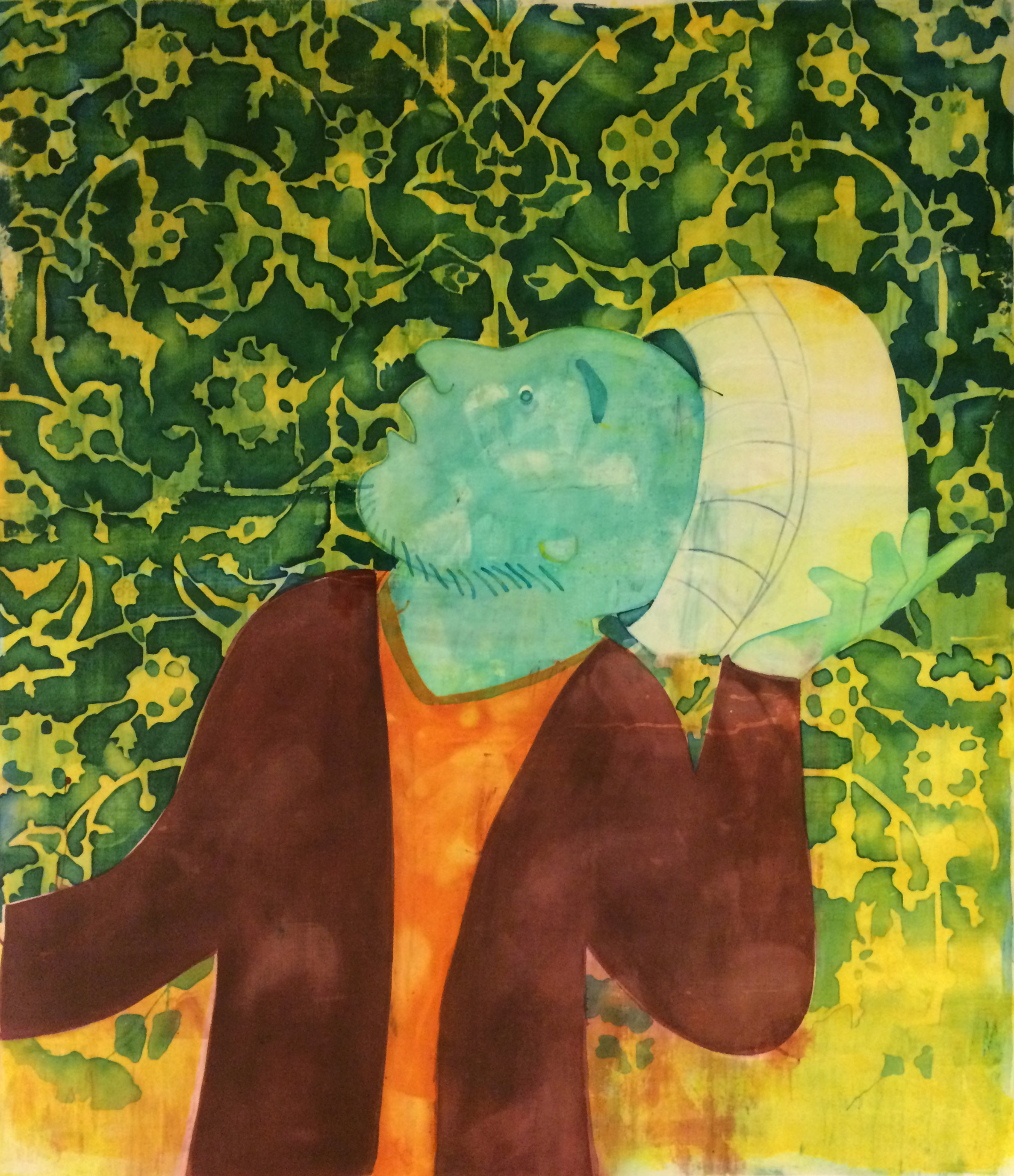 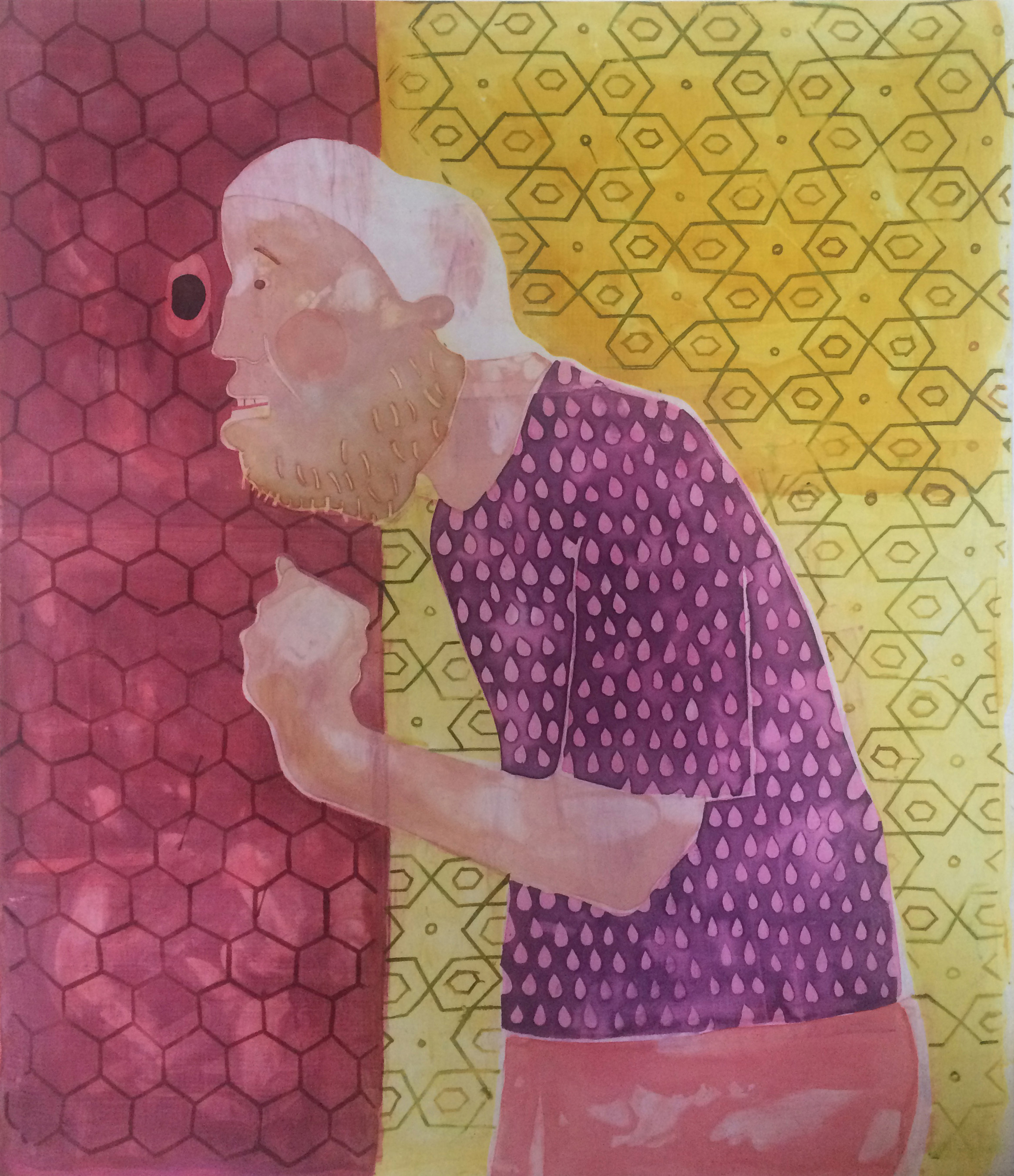 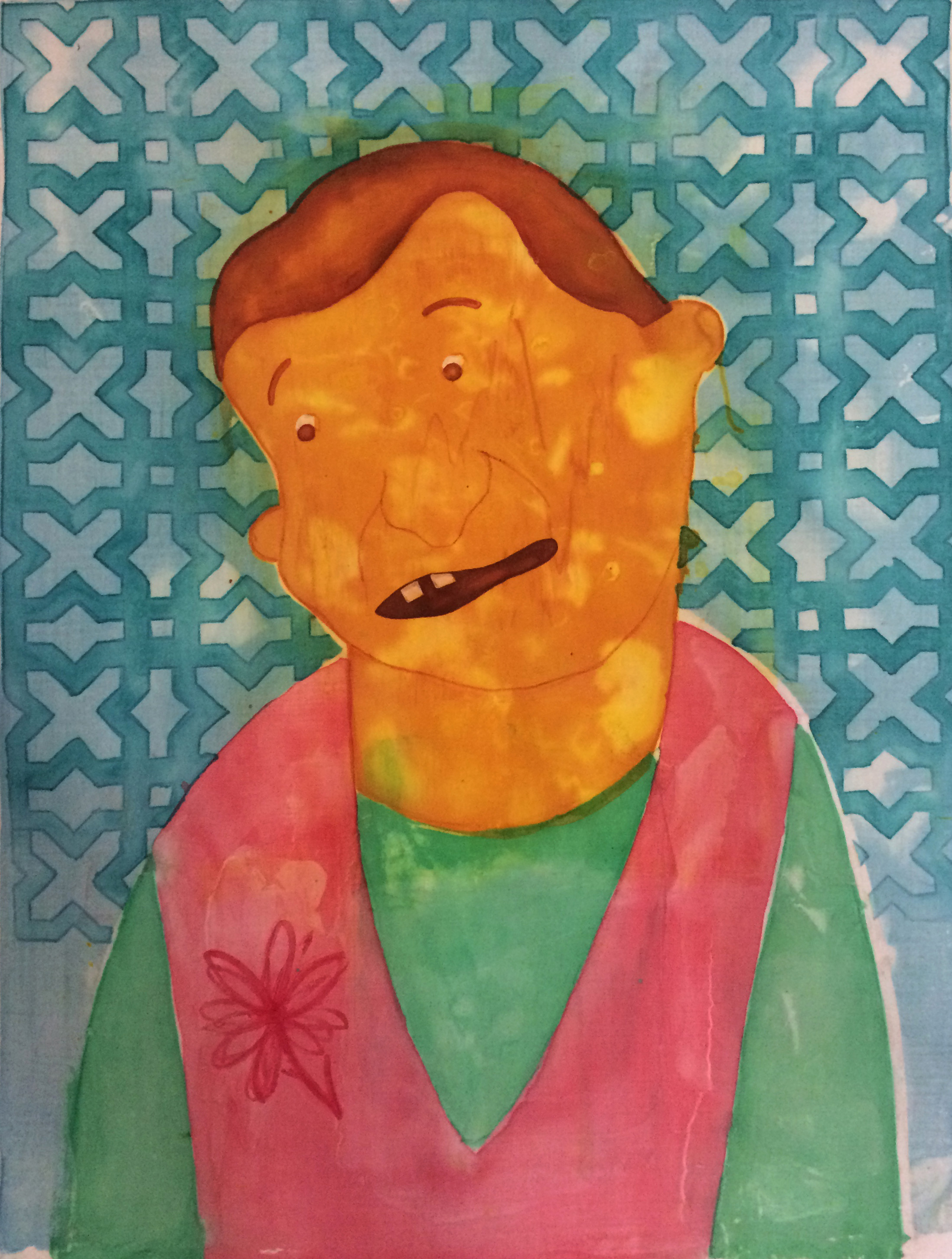 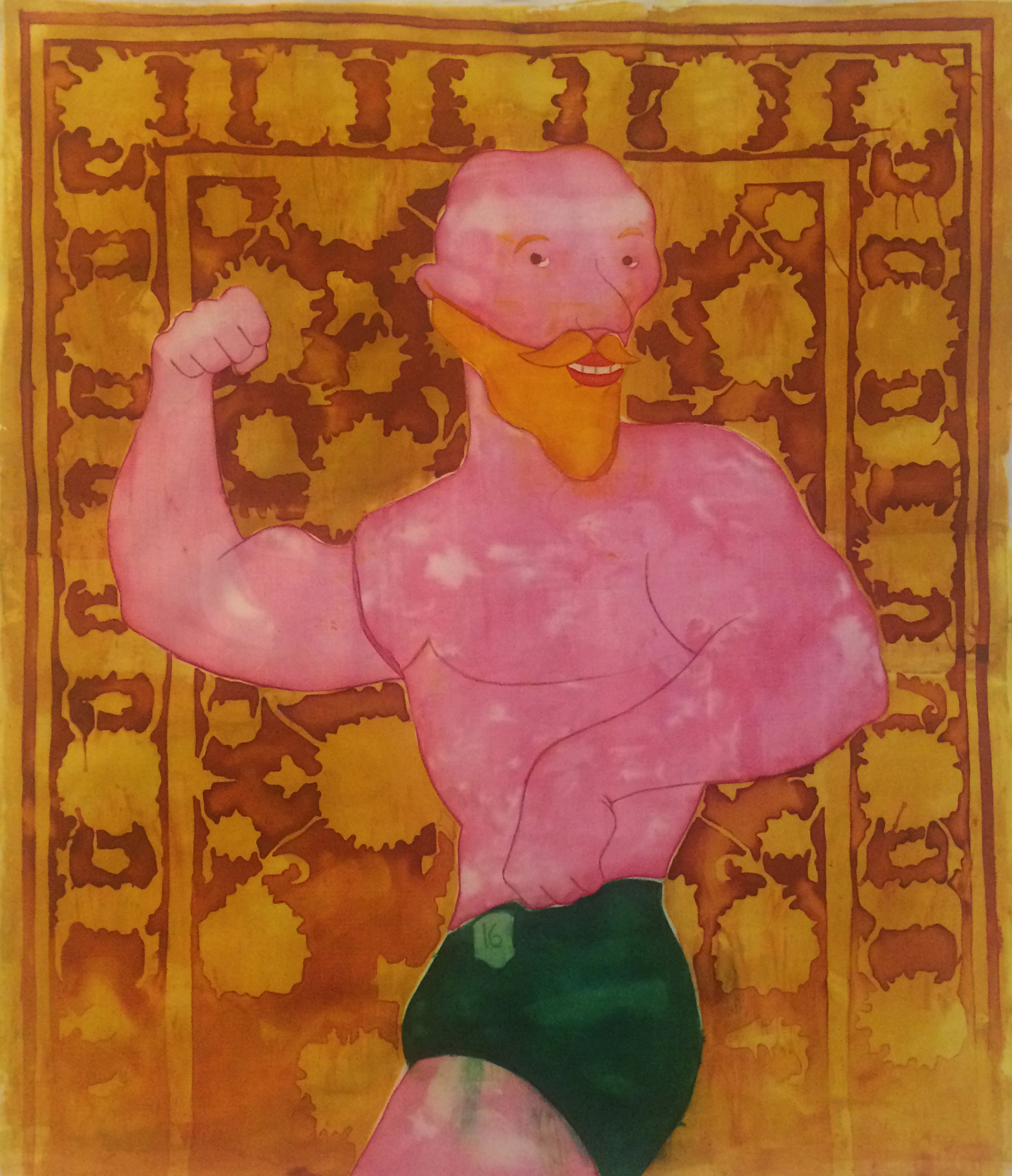 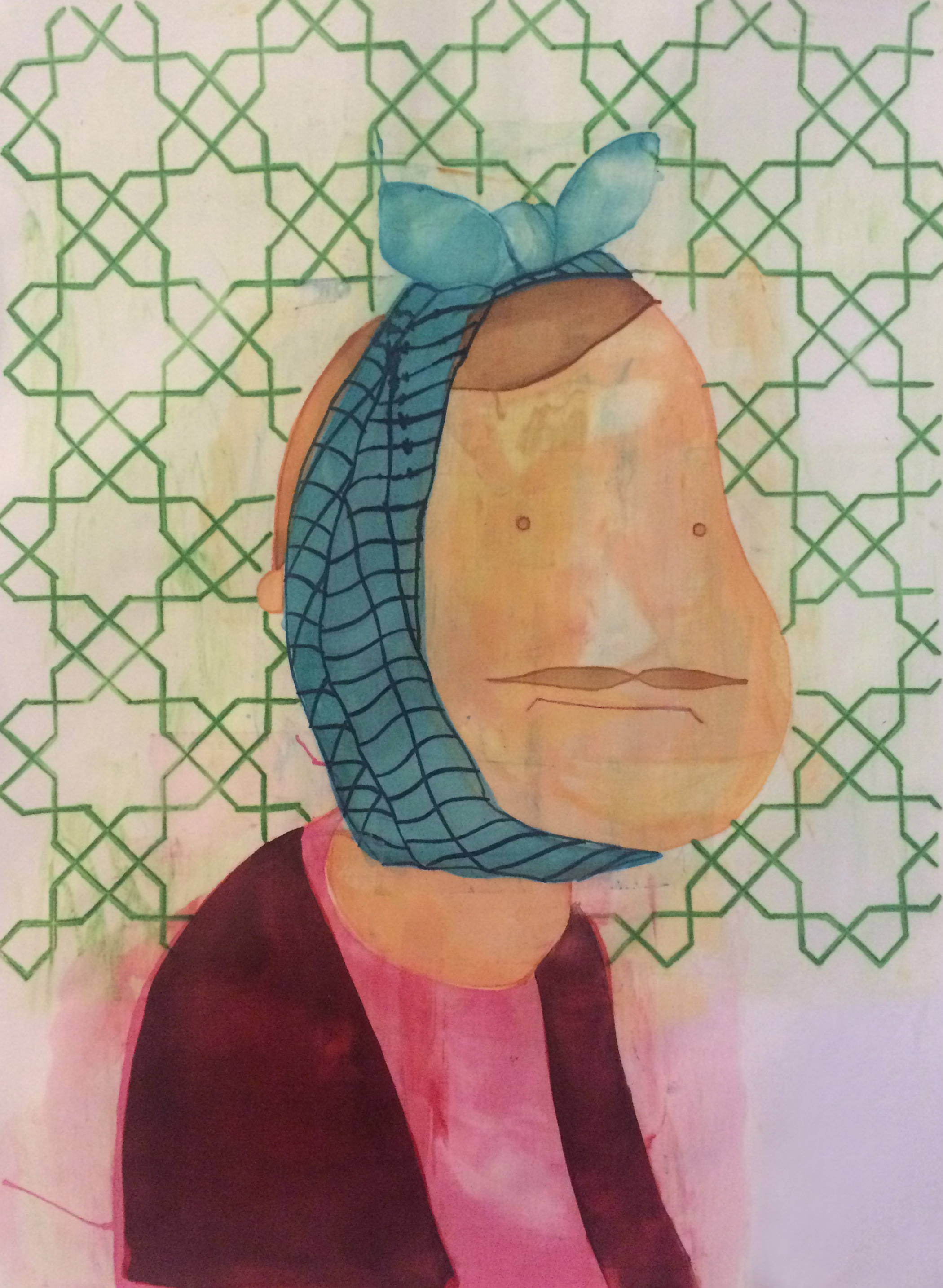 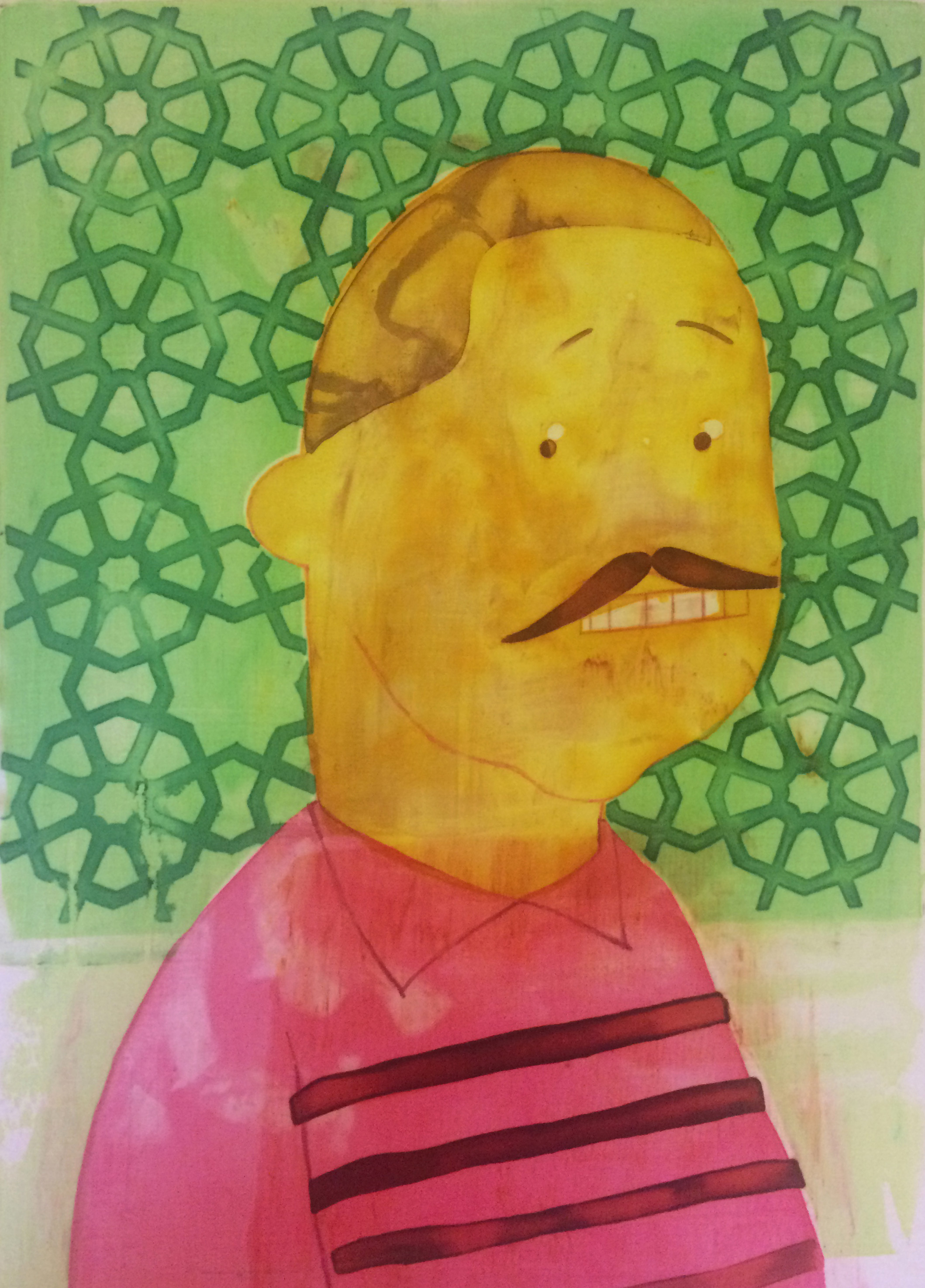 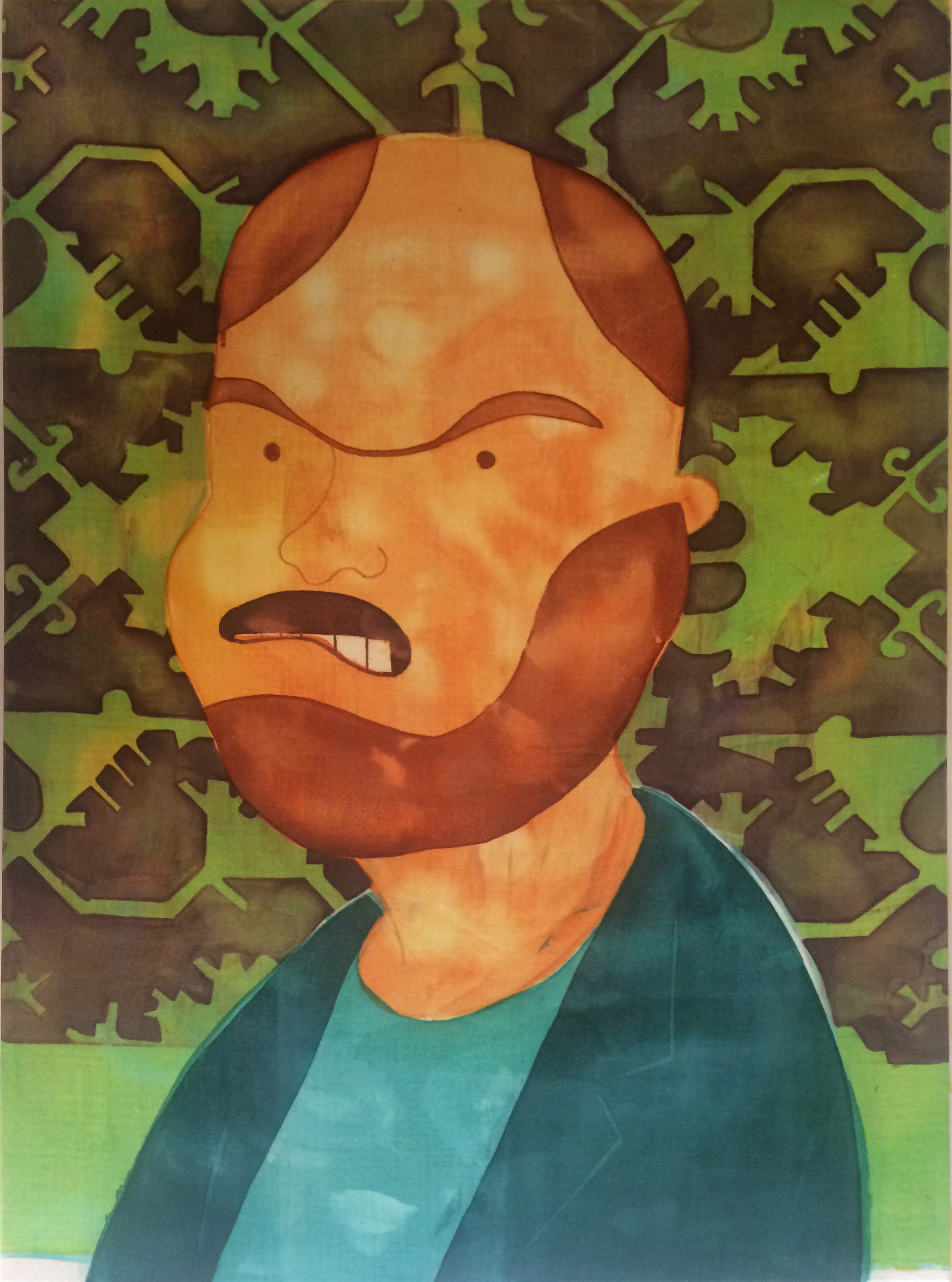 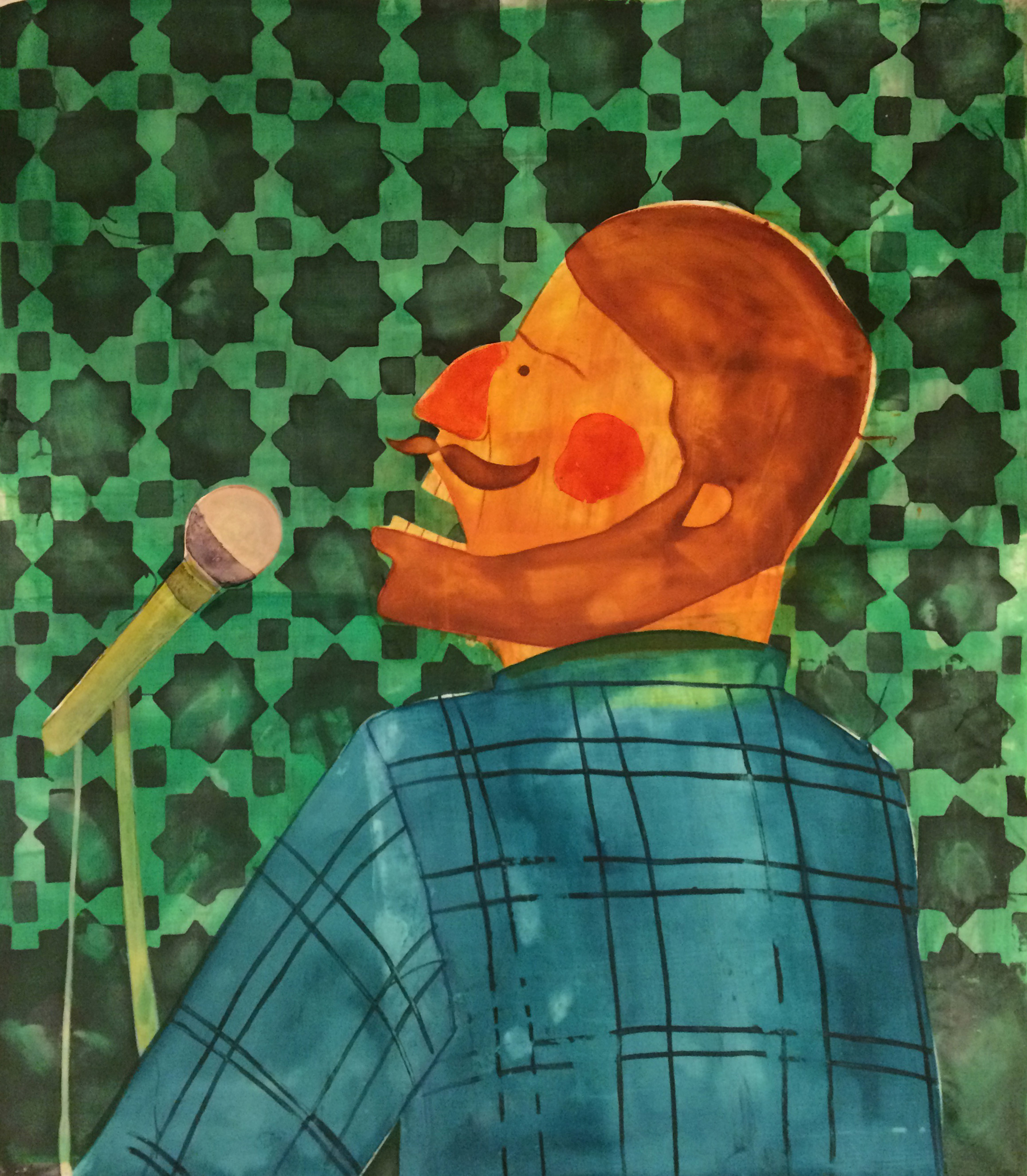