(This interview was done over text while Mirko Antich was sitting in traffic in Los Angeles, and Matt Borgia was painting at his home in Brooklyn.)

Matt Borgia is a man of many pants. Brown pants that are usually leaning more towards the workwear relaxed fit rather than your classic 5-pocket. He also figuratively wears mad hats. Art director by day, working painter by night, dog owner, whiskey drinker, the list goes on. I lived with Matt on the west side of Los Angeles during some formative years. We also worked together for a skate shoe behemoth where we learned how to become disciplined designers and stand up gentlemen. I know everything about the dude but you don’t so here he is.

Mirko Antich: So let’s do this. Wtf are you wearing?

Mirko Antich: So, I mean, I know literally everything about you. But tell the internet about yourself. What do you do? Why do you wear so much brown?

Matt Borgia: Hi internet, my name is Matt Borgia. I’m originally from Redondo Beach, California, now living in Brooklyn, New York. I paint and also do some art direction/design. And yes I have 12 pairs of brown pants.

Mirko Antich: Your professional career is in the realm of design and marketing for brands. How do you balance being a working art director and also find time for your personal art career?

Matt Borgia: Well I pretty much go to work in the morning, then when I get home I go to work for myself and paint, research, etc. You’re kind of always “on” though if you have a full-time job and are trying to make time to make personal work outside of the job that pays your bills. I’d definitely like it to be weighed more evenly between the two, but for now, I am making it work and prioritizing time in the studio over social time. 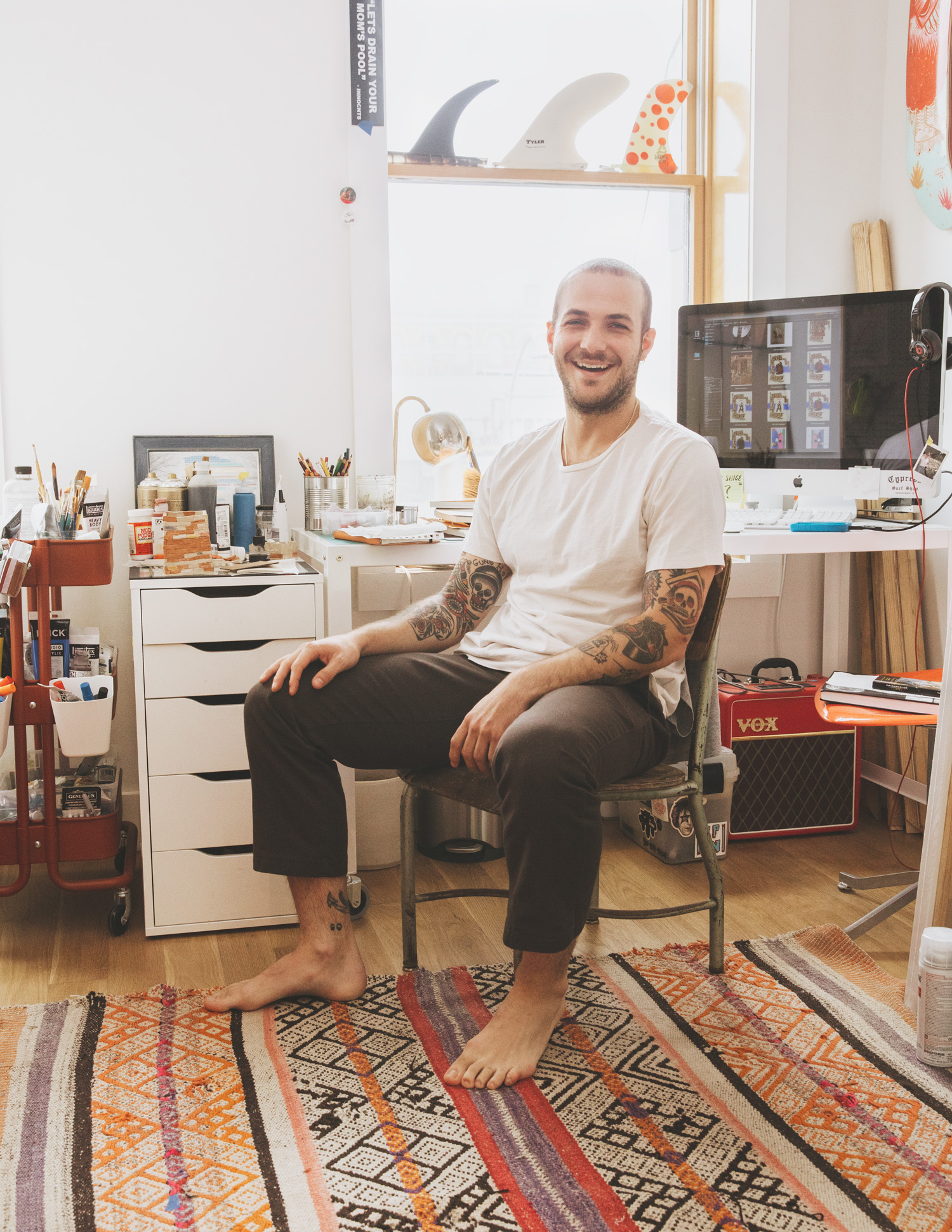 Mirko Antich: Time management is tough along with idea management I guess you could call it? Trying to mentally file which thought makes sense for which project is super time-consuming. Although it is cool that the two aren’t mutually exclusive from one another as is the case for most working people trying to have a side hustle or passion. One would say you are pretty lucky to be in the position you’re in.

Matt Borgia: Yeah, the fact that it’s two creative worlds is lucky, but it can also be draining at times. Sometimes I need to get on the computer once I get home to edit some reference or mock something up and I’m so burnt out from looking at a computer screen it can be tough. But other than that I generally enjoy painting more than most things so it makes it easy to prioritize being in the studio when I’m not at work. In general, they do feed off each other though for sure because I sometimes tend to design with more of my “art” brain and sometimes my “design” brain creeps into my paintings. I try to keep them separate to your point of “idea management” but rules are meant to be broken right?

Mirko Antich: Ya dude fuck rules. I feel like as a young creative you have to find a balance to get by and if your lucky enough to still be feeding your passion then you’re doing better than most of the population. So what’s up with your personal artwork? Seems like it’s always progressing and evolving from your early days in our living room.

Matt Borgia: Lol yeah, I do feel lucky for sure. With my personal work, I really try to keep my options open and not limit myself in terms of subject matter, materials, etc. So yeah I’ve gone through a few different “phases” I guess from my perspective though, there’s a connection between all of it. It probably isn’t obvious to the viewer but that’s ok with me. 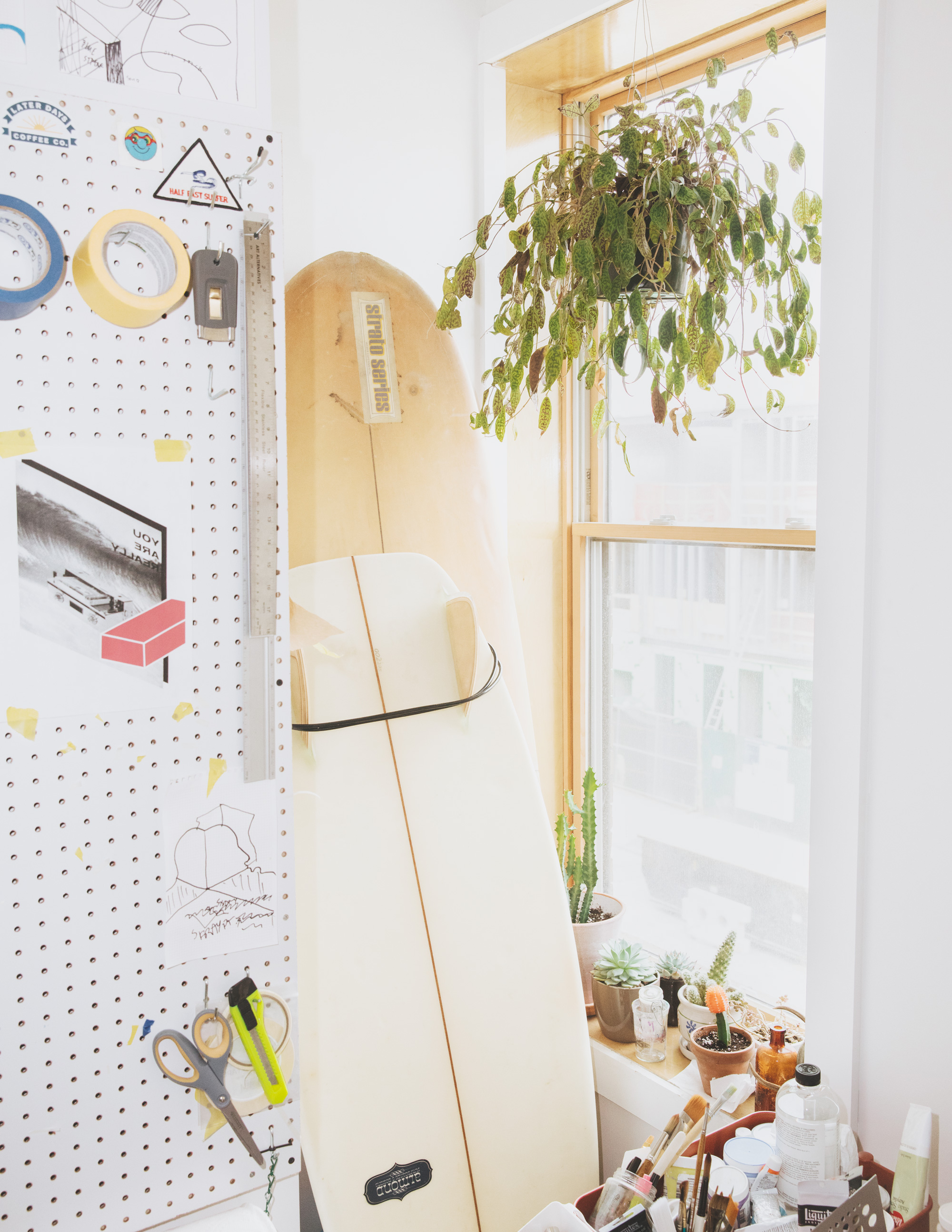 Matt Borgia: Haha yeah yeah yeah I like bricks I know. They kind of took on a life of their own, the bricks that is. It started when I was doing all those castle drawings. They’ve seemed to stick around since then in one way or another.

Mirko Antich: I fancy you a surf turkey. What’s it like being involved in the surf industry in New York, which isn’t your stereotypical surf city?

Matt Borgia: Uh it’s interesting, to say the least. The surf culture is very different out here in good ways and bad. It is pretty crazy living in one of the biggest cities in the world and still being able to go surf regardless of how inconsistent and unpredictable it is. So I guess it’s a plus to be able to surf at all and live in New York 🏄‍♂️.

Mirko Antich: So you love surfing so much that you gave up 16″ trunks and living a couple miles from the beach for a 4/3 suit, carrying your log in the subway for a hundred stops. 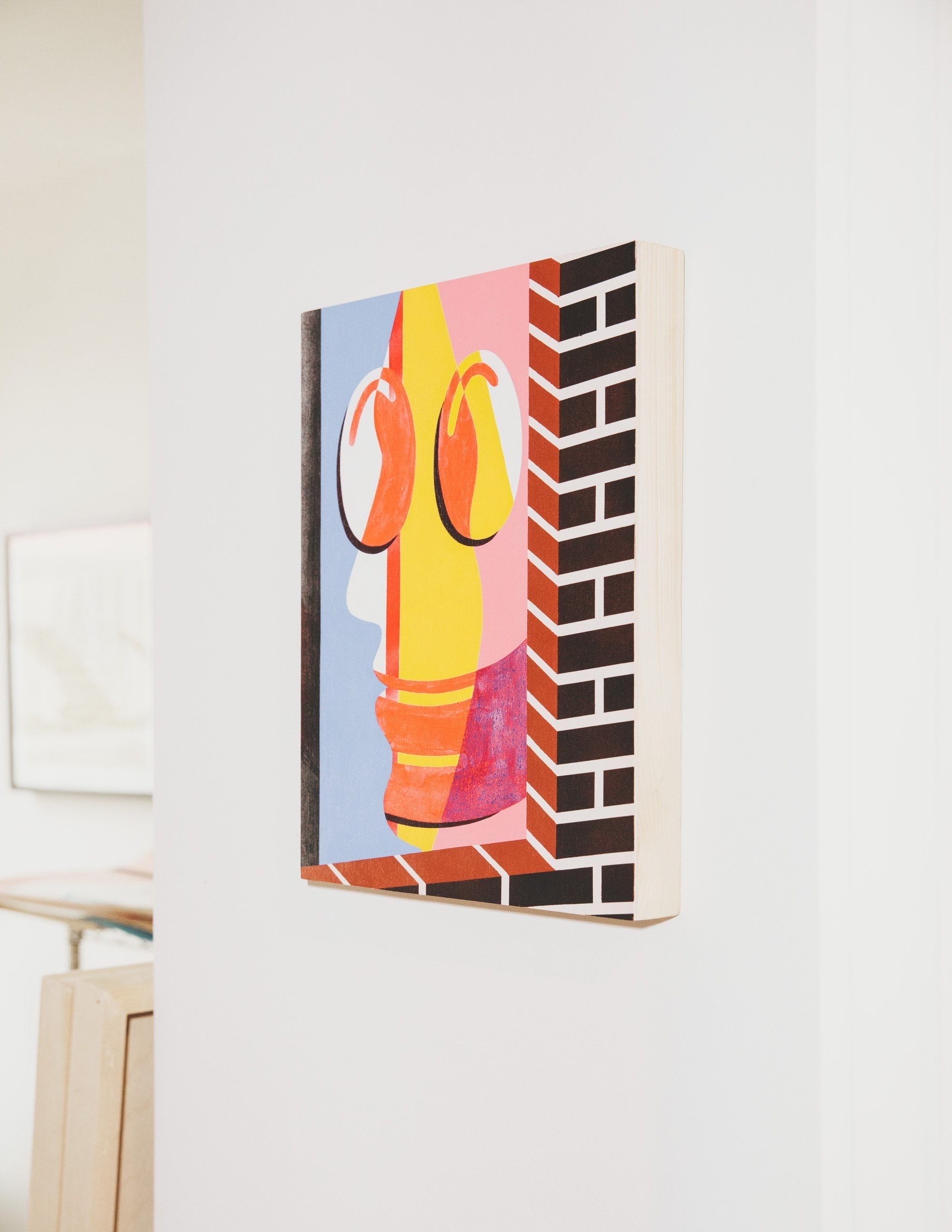 Matt Borgia: 5/4/3 suit 7mm gloves and booties* I’ve only taken the subway back from the beach once though. Thank god for my friends that have cars *shout out* But, yeah surfing here isn’t ideal, but I live in NYC and all of the other aspects of the city make up for it minus the winter. Winter sucks.

Mirko Antich: Last time we spoke you said you were spending more time with whiskey in your hand rather than making work. Winters get cold ya gotta stay warm. How’s your work ethic going now that it’s warmer?

Matt Borgia: Well to be fair, yes, winter is depressing and seasonal depression is real and alcohol can help on your first go. But during the winter I ended up rethinking a lot of my work and doing more research than actually putting paint on a surface, but it’s still equally as valuable

Winter coincided with a phase where I was slightly unsure of what I wanted to make, or a sort of questioning of what I had been making for a year or so. But to answer your question, I am working more now. I am actually painting right now. I do plan on working a lot more this winter now that I’m in a groove and doing anything when it’s freezing outside sucks. 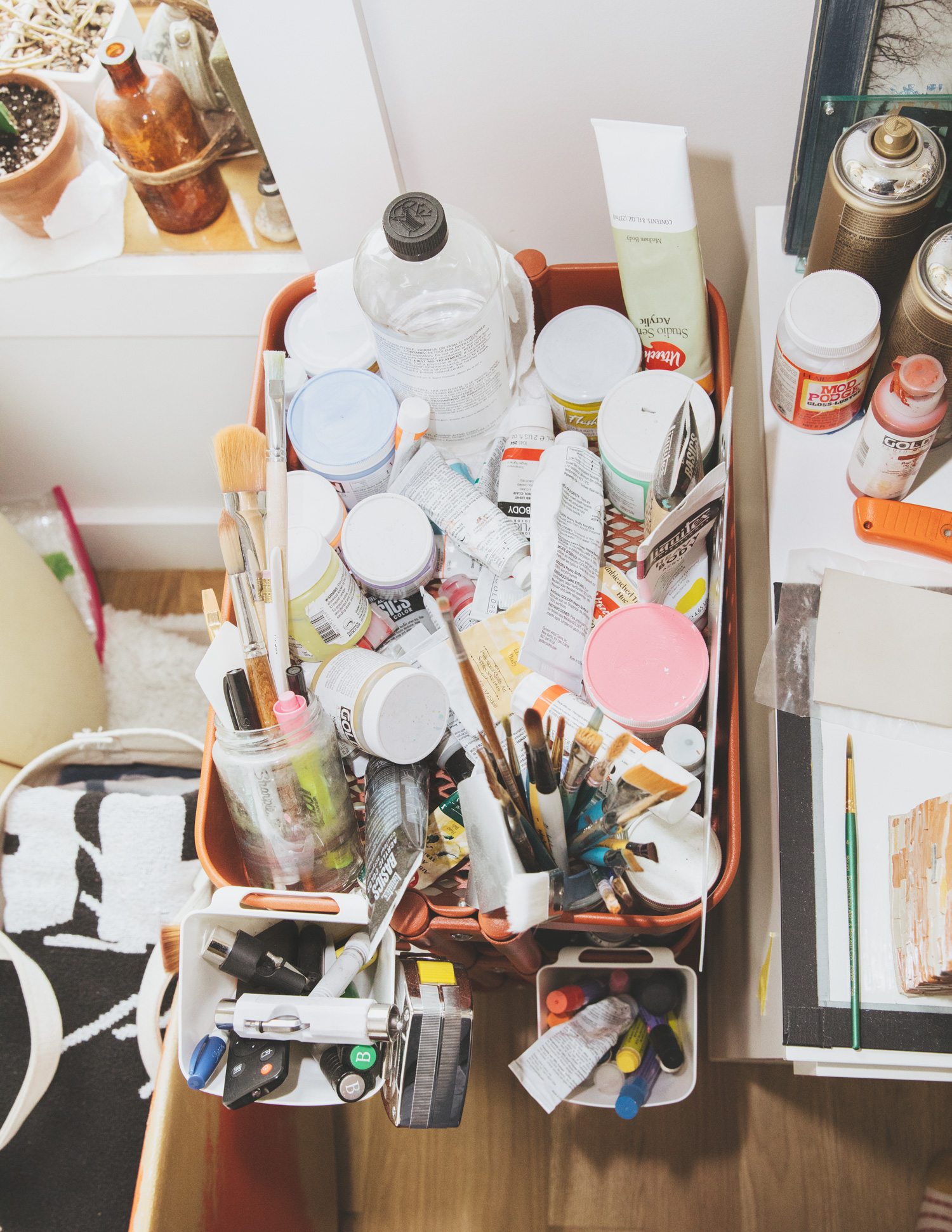 Mirko Antich: How would you describe your current body of work? Is there any person, place, or thing that’s been influencing you lately?

Matt Borgia: I would say previously (past two years or so) I had really been focusing on the world around me and now I am sort of honed in on my specific interests however random they are. I am finding a lot of joy in researching some pretty general things and also really obscure elements of specific cultures and ideas and trying to bring them all together in certain pieces

Living in New York has definitely made an impression on my worth though. Since this is such a dense city, with all sorts of crazy shit going on at all time, I don’t know if that’s too general, but yeah that’s kind of where I’m at right now. If there’s something I’m just really in to, I’m going to try and incorporate it in my work in some way whether it’s some weird “flat fix” sign or if it’s a 1960’s Hap Jacobs ad from an old surf mag or some armor that’s part of the collection at the Met.

Mirko Antich: I think that shit is the most interesting. People have such a wide variety of interest and when you smash them all together you get one specific point of view. I feel like as creatives that’s all we can really offer. Making our own filter that we see shit through in a world where everyone is so influenced by the same blogs, same magazines, and same subcultures. 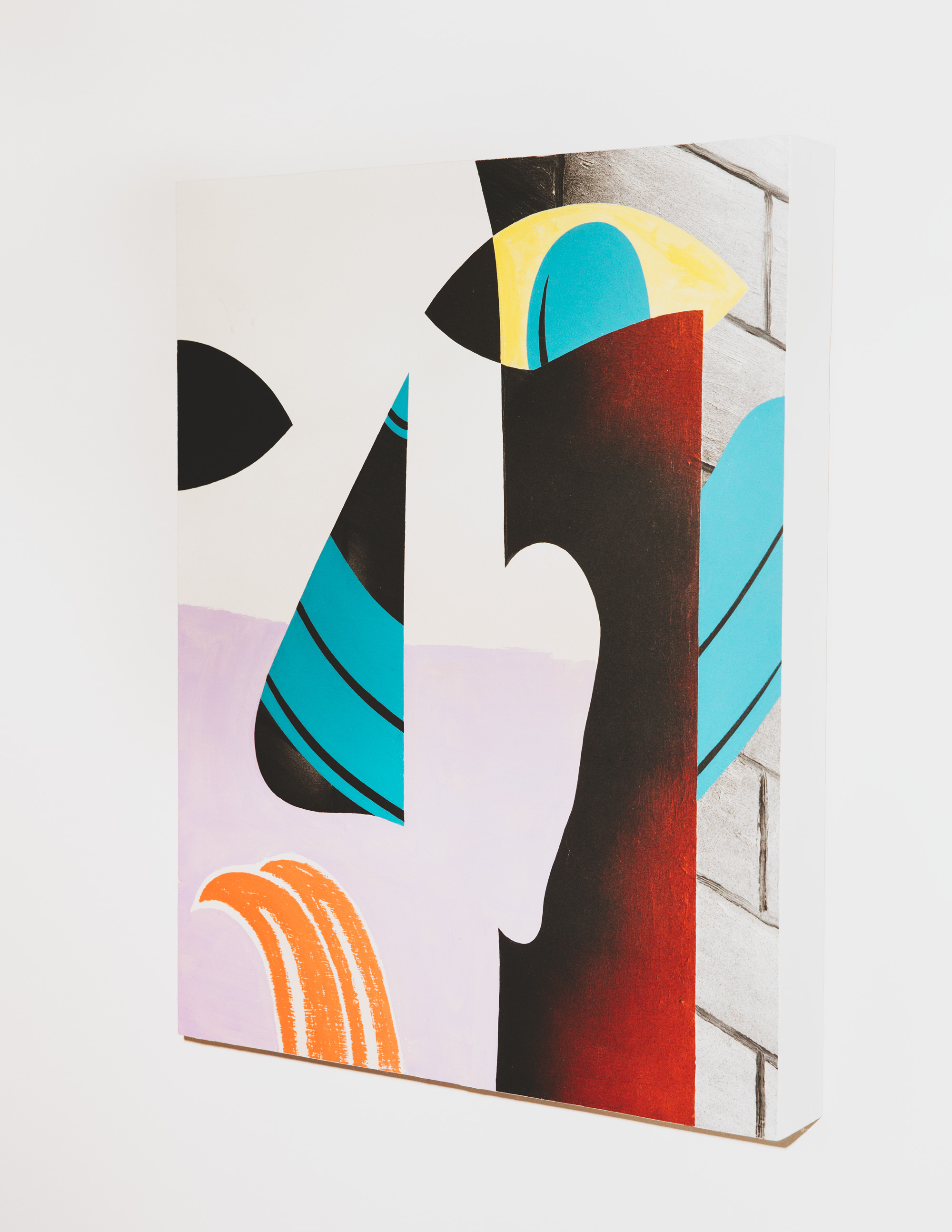 Matt Borgia: Yeah totally I mean, I think it’s important to really put yourself into your work in one way or another. I’m aware a lot of other people share specific interests that I do, and with that being said I’m definitely riffing off of pretty specific elements of whatever my reference may be, but I like the idea of my personality and curiosities showing through in my work even at just a surface level.

Mirko Antich: Like when you used to paint knights because your favorite place to eat dinner was Medieval Times?

Mirko Antich: Yeah who fuckin doesn’t dude. Huzzah. Anyway, I digress, aside from your subject matter, how did you arrive at using the materials and processes you work in?

Matt Borgia: Well I am using pretty traditional materials in that I mostly use acrylic paint, but I do like to mix materials as much as I can. It just depends on what I’m trying to achieve. I’ve always had an affinity for drawing since I was super young so I tend to just straight up draw on big panels over acrylic or other paint a lot. I’ve also been really interested in trying to replicate certain appearances whether it’s a digital look or more of a printmaking mark. So sometimes different materials and methods work better than just brush and paint. I think that just comes from trying a bunch of different materials over time though and knowing how certain materials will act on their own/together/etc. Sorry if these are drawn out answers I’m a little spacey because I’m trying to work on this painting. 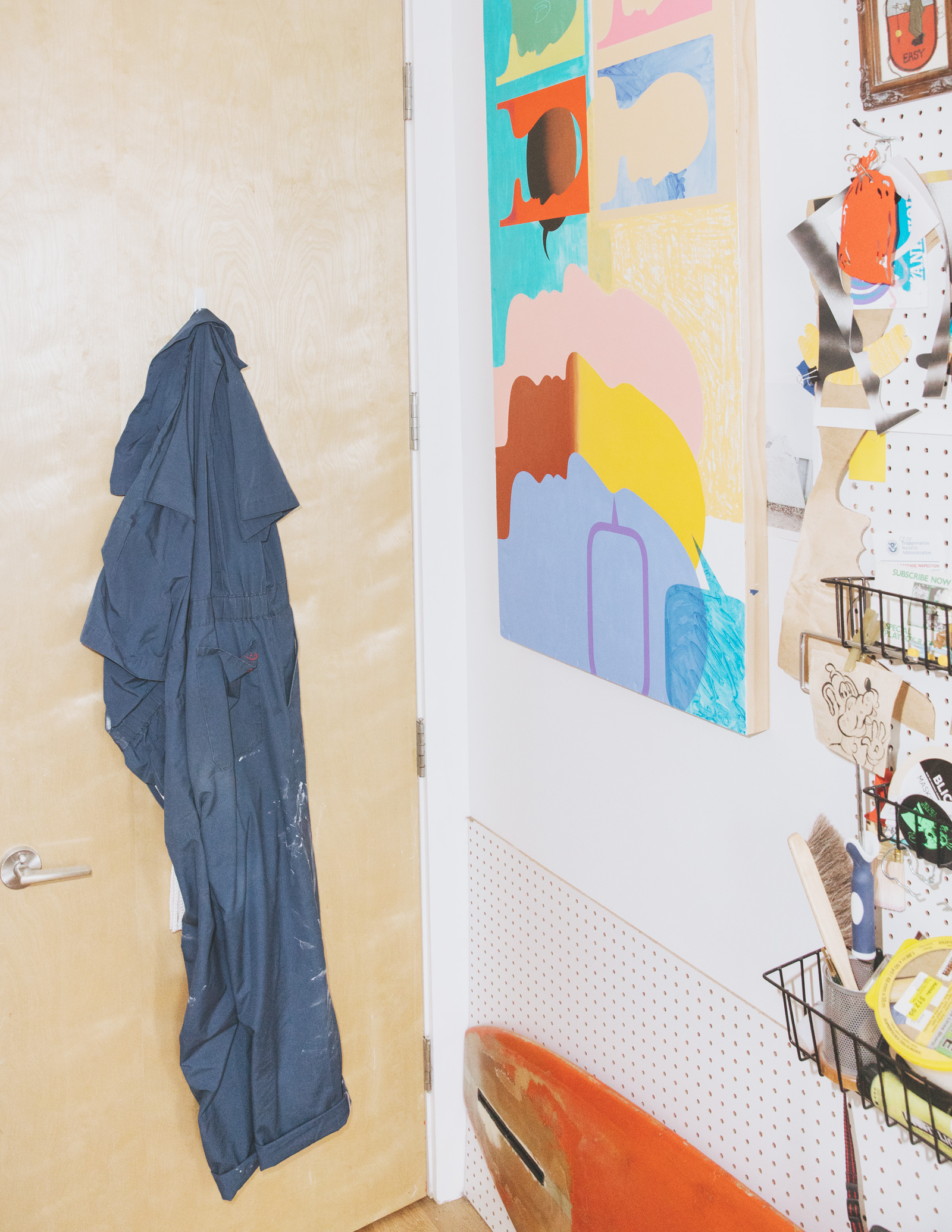 Mirko Antich: Hey. Don’t you ever apologize to me for working hard. Actually, apology not accepted.

Mirko Antich: You recently got engaged. Congratulations by the way. I know I already harassed you and Savannah but I thought bringing it up in this interview would give your fans (or lack thereof) a cool perspective into your personal life. How’s it feel!?

Matt Borgia: Haha I’d say it feels the same. Granted I knew it was going to happen for a long long time well before Sav did, but yes very exciting ya boy is gonna get married next year. I am an idiot though and thought it would be a great idea to do it right after we moved while stress was high. Oh and also the ring got lost in the mail for a few days.

Mirko Antich: Classic Max Porsche move. I think we will title this piece something hip like, “Who is Max Porsche?” A look inside one surfer’s journey through gentrified Bed-Stuy.

Matt Borgia: Jay Rock’s new album, Rocky’s new album, I’ve been archiving a bunch of misc. stuff from old surf mags for this new book idea I’m kicking around. Also found a great book on the street recently “A Handbook of Greek & Roman Architecture”. Always trying to find the best Mexican food in New York. Ummmmmmmmm also Castle Rock is good (you should watch it you have your own page on my Hulu account) + Ghosted because Craig Robinson and Adam Scott are a great duo. 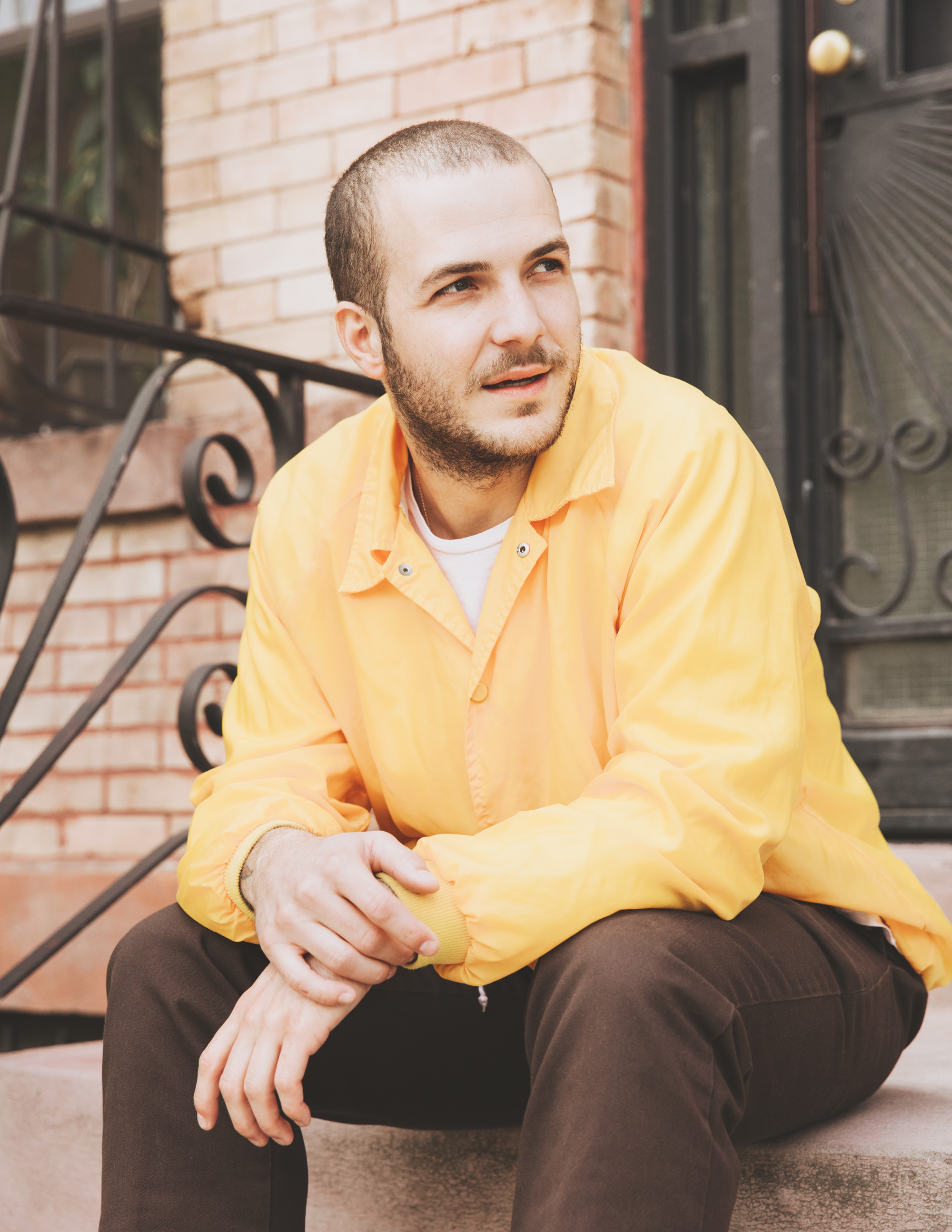 Matt Borgia: Lol. NOT GIVING THAT OUT TO THE WORLD. It’s bad enough that you’re using my account.

Mirko Antich: Well on that note. I think I’ve got what I need.