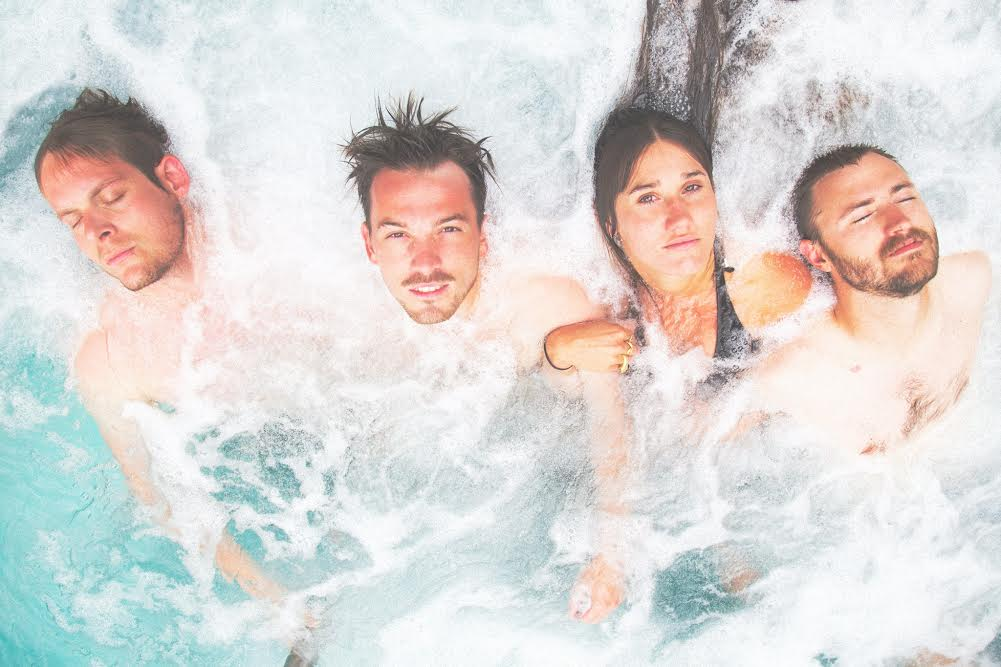 Three parts Utah natives, one part Australian sweetheart, add in some instrumentals and vocals, mesh it all together, and you get Heaps N Heaps. With a recent track release, “New Heart,”  Heaps N Heaps defies what it means to be a one-minded soul, without relying on the other half of the heart.

Dan, Zack, John and Alisa formed  an all-the-time kind of band. The type of  music you listen to on your way to a festival down the 105, sunbathing in your backyard with your closest mates or even in the worst of moods craving for a pick me up.  Now, residing in the dreamy, yet chaotic and quirky Venice Beach, the four guzzled some wine, put their diverse minds at work and began to create special words and rhythms birthing album number one in 2014, Like No One’s Around. The bundle of songs make you think you are on a spaceship soaring far, far away possibly never coming back down from the high of curiosity. Heaps N Heaps gives you the permission to ask “Why?” or “What If?”- to interpret the world, people, places, and things.

“Each person’s greatest asset in the band is their own style and interpretation of why certain things are the way they are,” said the talented group of musicians. Now, in 2016 the crew transforms and develops their alternative-indie aesthetic to a more complex genre infused with poppy-dancey traits. Most recently releasing a Sony and Cher meets Fleetwood Mac tease in the song, “New Heart,” the group defines what it means to have an eclectic taste for true musicality. Envision a dark room, a solo light hitting the voices that are singing the chilling break-up song, letting  you know it is time to move the hell on with more than just a single glimmer of hope.  As the only female vocalist, Alisa, and one out of the three males; Zack go back and forth as if they were bickering, yet unite in the line, “No, I’m not alright here, I think I’m falling apart.”  The symbiotic vocals put the idea of mutual understanding between one another- a toxic relationship only rushing down with nowhere to climb back up. Being able to have the self-awareness of knowing it is not a good idea to be together; possibly the hardest trait to have.

“We think of New Heart more as the up-tempo, deceptive dance song about moving on but we loved how strange and different it stayed,” the gang states. The Heaps N Heaps were able to establish the difference between “New Heart” and their previous not-so-up-beat songs. Having the strength and ability as an artist to hear an unheard genre mixed within a present one is a gift. The Venice residents mix the feeling of  being in a foreign place, an unfamiliar realm or even in an unknown state of mind; fuse em’ all together and you get the creative minds of Heaps N Heaps. Being able to transform from a surfacey sound to an overindulgent gem mixed with worry, adrenaline, and passion makes you want to hear more of the new wave band. “We want listeners to know that these songs are heard best on good, loud speakers with a glass of wine in one hand and a beautiful friend in another,”  said the hyped crew.

On an end note you can catch these wild and spunky humans doing their thang on September 20th at Del Monte Speakeasy in Venice Beach at 10 pm (with valid I.D. 21+) or you possibly might turn into a toad who only knows the hypnotic  Twinkle, Twinkle Little Star tune. Don’t forget the name Heaps N Heaps- versatile, rhythmic, and thought provoking; Now go listen!