You could say that photographer Rachel Cabitt is a little obsessed with colored lighting, particularly at night. There’s something about the night that brings out a different side of people, environments, and situations, especially in New York City, that Cabitt has become more than mildly infatuated with. “Nighttime has always interested me for its sudden shift in energy and possibility.”

After getting involved with POND magazine some years back, and diving head first into concert photography, Cabitt quickly became wary of capturing photos from the pit that probably looked exactly like the ten other people standing next to her with their lenses pointed ardently at the band on stage. Now, Cabitt’s photography is more focused on visualizing the music scene without the obvious—documenting friends and intimate experiences that evoke the moody and sultry vibe of the surrounding nightlife.

In her new zine, “I Like You Better At Night,” Cabitt shares a series of photos that accentuate these moments. Shot at night, in the dark, Cabitt captures something personal, using each frame as a visual point of reflection. Cabitt has an innate knack for portraying her subjects in their nighttime versions and exposing the sense of freedom and openness that can sweep across you when night falls.

How and when were you first introduced to photography?

I was first introduced to photography my freshman year of high school. I was actually annoyed that I even had to take a photography class, I really wanted to be doing studio art instead. But once I took the class I obviously was hooked, so thanks high school for being good for something!

Has photography always been your primary means of expressing your creativity?

Before I got into photography, I was mainly into painting and drawing. Photography became my main form of expression when I went to college and majored in it. While I don’t regret focusing entirely on photography, I do miss painting and drawing, and now try to set aside time to keep up with my other mediums. I’ve also recently started experimenting with filmmaking, specifically on Super 8. I’ve learned not to restrict myself to one thing. Translating my ideas through a variety of mediums expands how I think about my photography. 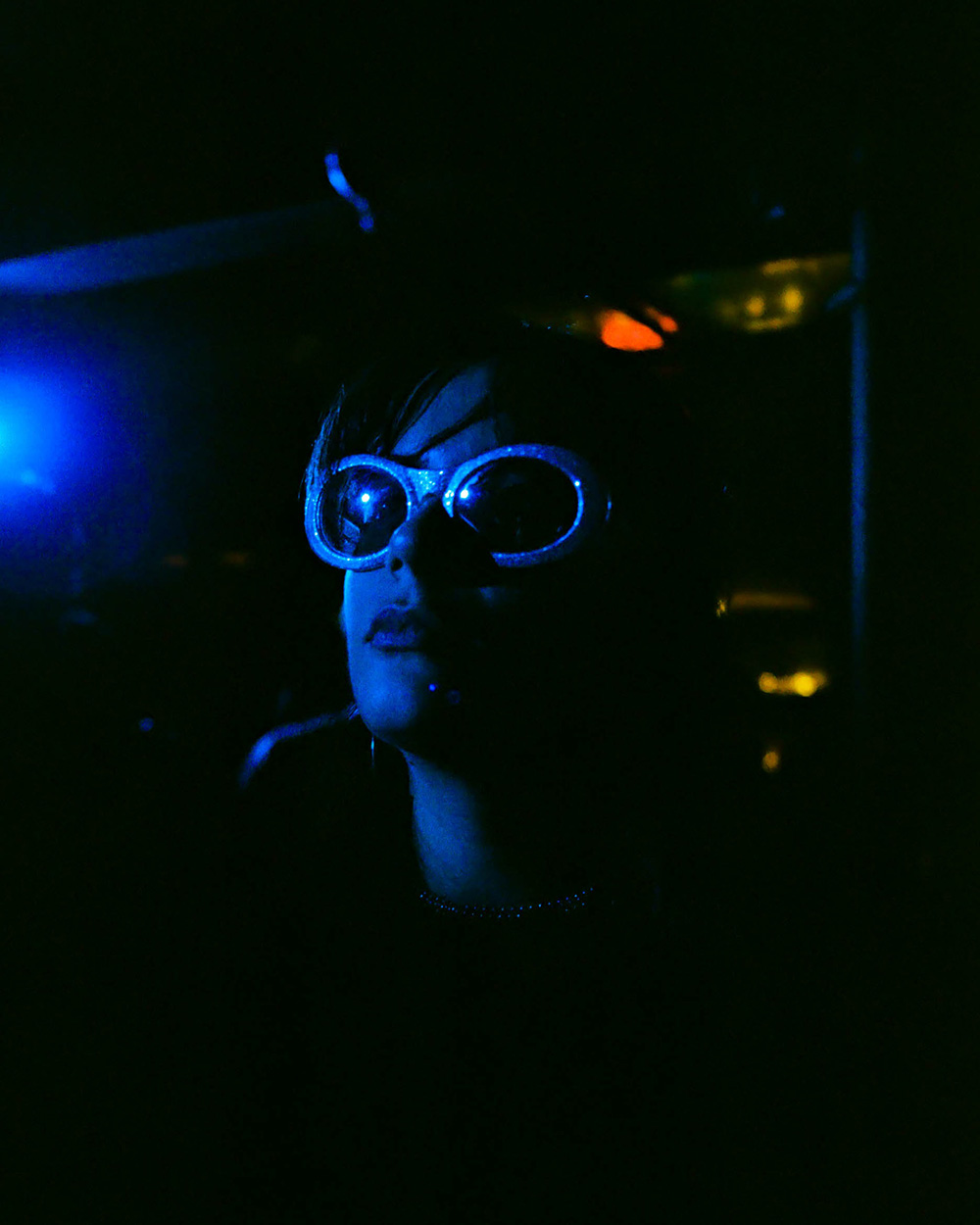 How did you become a part of the music scene in New York?

I became involved in the music scene when I started helping out with an online publication called POND Magazine my junior year of college. Before that, I was pretty much a loser and never went to Brooklyn. There were only two of us based in New York at the time, so a lot of it was going to shows by myself and meeting and getting to know a lot of the bands in New York. A lot of the bands I met became some of my good friends and now I’m stuck with them.

What were some of the first shows you went to when you moved to New York?

Some of the first shows I went to were at DIY spaces like Aviv, Shea Stadium and Baby’s All Right. Baby’s is still one of my favorite places, and sadly the only one still going out of those three. It’s an interesting time to be in the music scene in New York because a lot of the DIY spaces which made the scene so great have been shut down or just became too popular to the point where they’ve ended up not being DIY anymore.

One of the first bands whose shows I started going to were The Britanys (who I’m still good friends with). A year after we met, we road tripped down to Pennsylvania to play a house show at Penn State where Natalie, the founder of POND, went to school. We lost the bass player that night, but found him in the morning when he came back in the pouring rain soaking wet. To date, that show is one of my fondest memories. 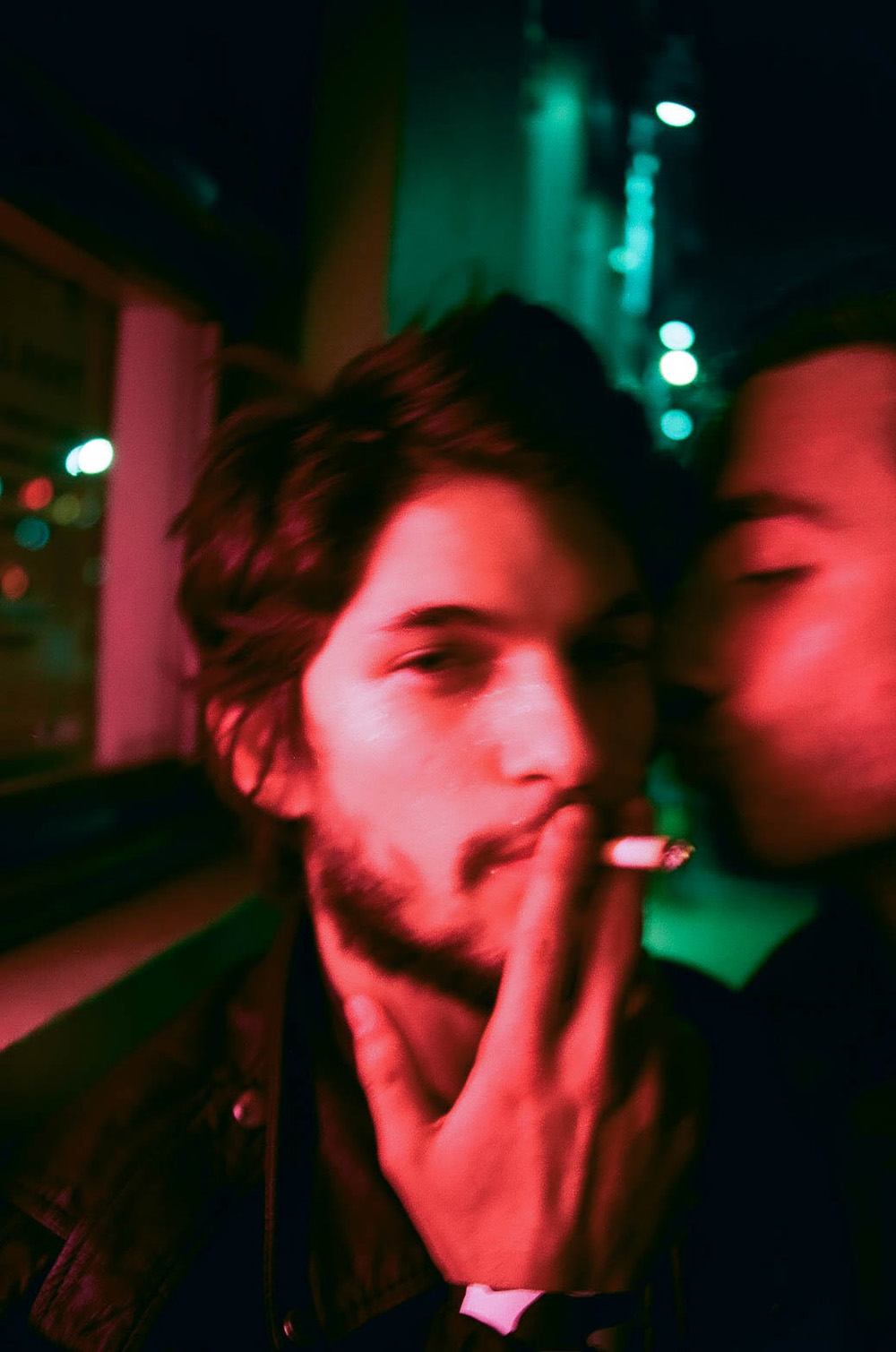 You’re obviously apart of a really cool music/creative community. What does community mean to you? How does your community inspire and motivate you?

I think what makes Brooklyn so great is that everyone is doing something different. Being a part of a community with such diversity inspires you to want to contribute to it. Supporting and sharing other peoples’ work is such a big part of being an artist. The majority of my work is portraiture, which heavily requires collaboration between myself and my subjects. The people who I photograph are those who inspire me and who I surround myself with.

How do you think your photos visually describe the music scene you inhabit?

That’s always a question I ask myself. When I first started getting involved in the music scene I shot a lot of live concert photography. I quickly grew disinterested, wanting to get more intimate shots, not having my work be the same as the other three photographers who were in the pit with me. I was always interested in colored lighting instead of using flash, so I translated that to more behind the scenes, candid moments after the show, at the bar, outside the venue. Now, whenever I pick up a camera, I always keep in mind how to visualize the music scene without the obvious. I like to focus on the surrounding nightlife of it instead.

I shot these photos for about a year. At first, I really wanted to put together a zine that showed my work from when I was first introduced to the music scene up until now. But truthfully, a lot of my early work just isn’t that good, or who I am as a photographer now. Back then I was learning my way around venues and just trying to take a good photo of a band, so it felt forced trying to include those. 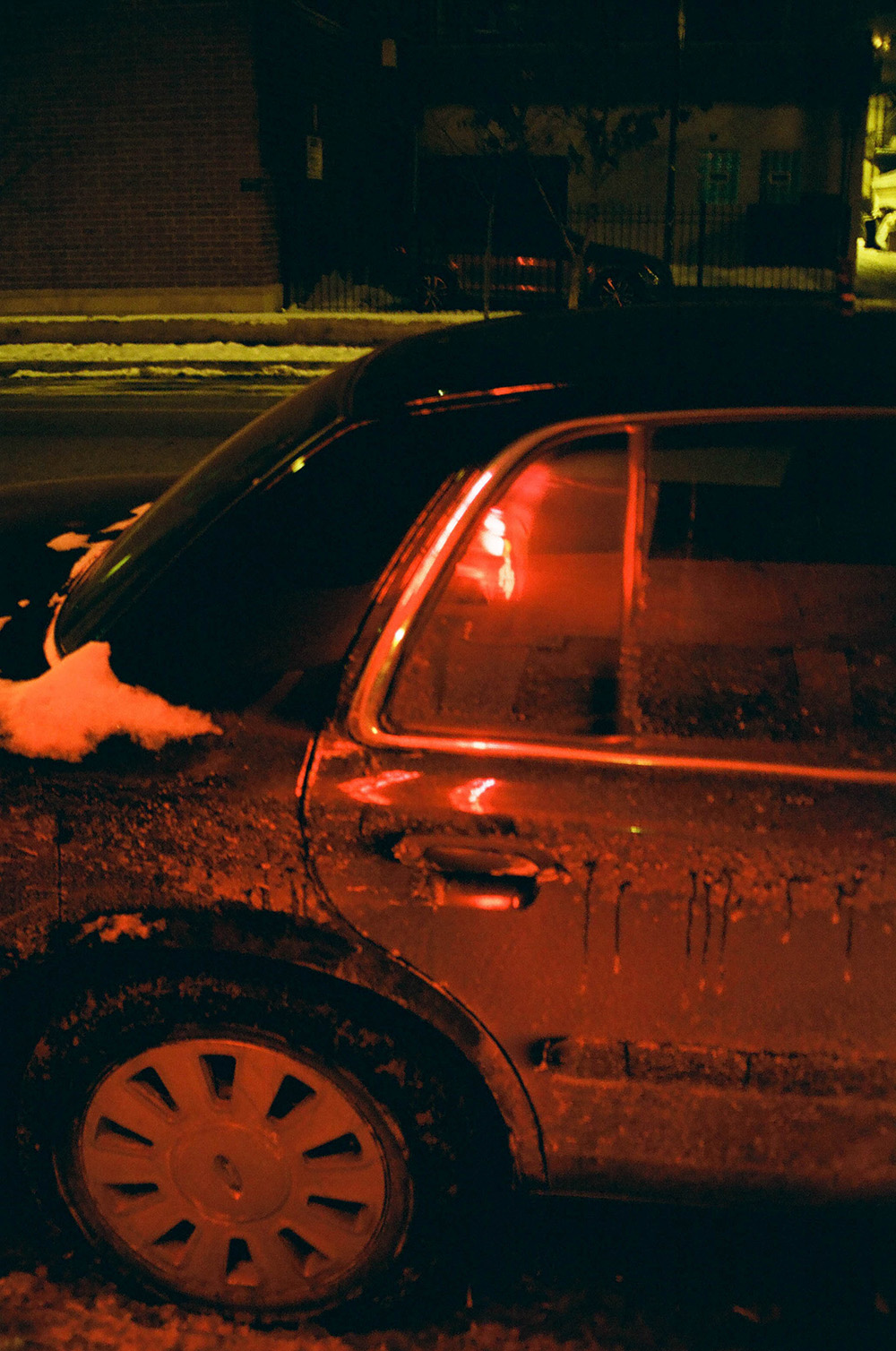 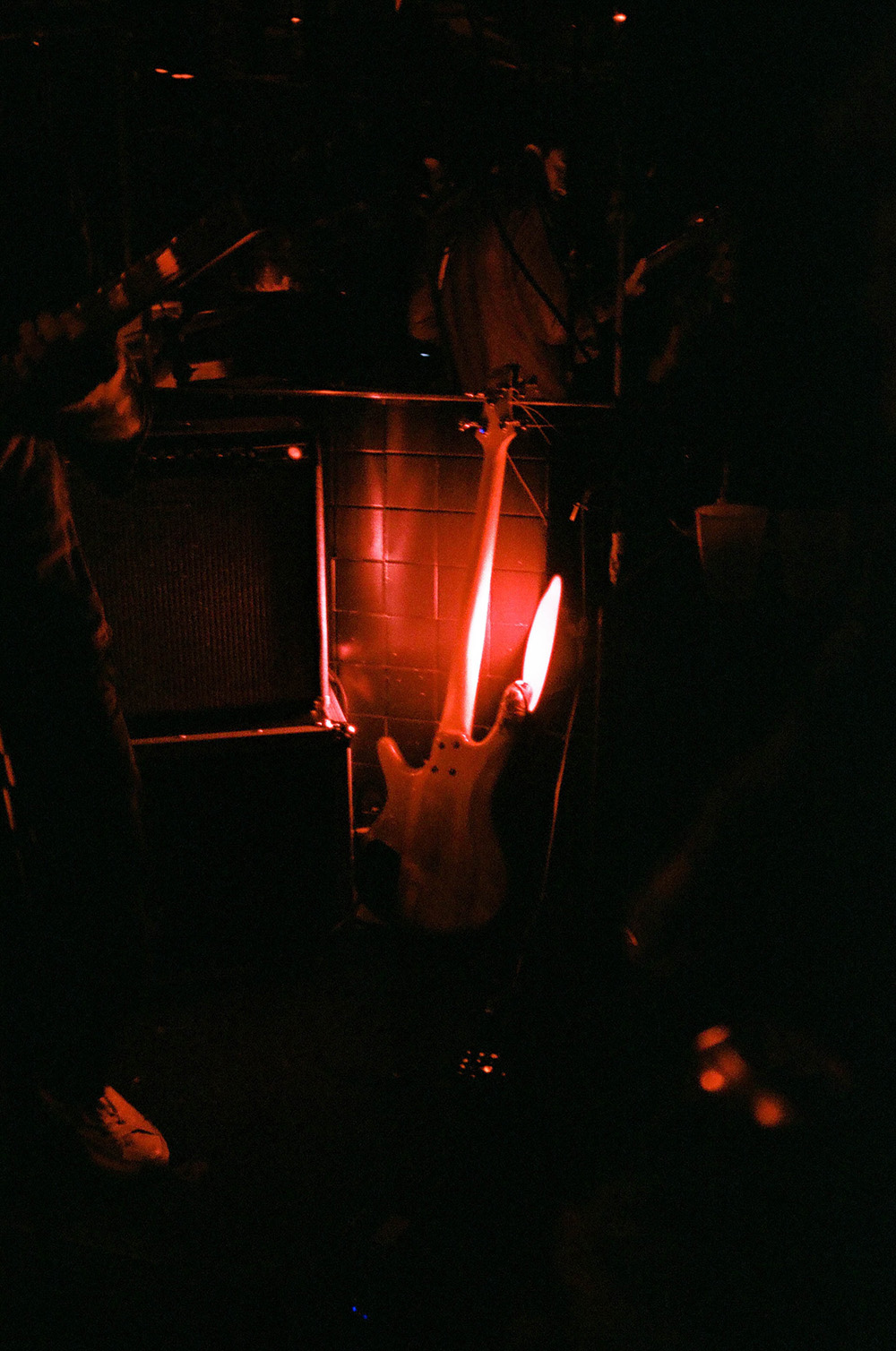 Now, if a stranger were to look at my work, I don’t necessarily know if they would connect my work to the music scene here. I instead like to think of my work as just encompassing nightlife. But once I knew I wanted to make a zine with my current work, it was always in the back of my mind when shooting. As I’d get more film back I’d see the holes of what I needed to shoot more of to make the zine complete. A lot of the photos in the zine no one has seen before. That was also nice, not making work for instantaneous approval.

There’s a very personal touch to “I Like You Better At Night,” you obviously know and are close to the people in these photos. How, as a photographer, do you try and translate that personal connection you have with your subjects?

The nighttime has always interested me for its sudden shift in energy and possibility, especially in New York. Shooting at night, and in the dark, is a very intimate experience, at least to me, so the environment and mood is a huge factor in how I shoot, which is why I almost only shoot at night. I feel that people are different versions of themselves at night, hence the title. There’s a sense of freedom and openness that they don’t necessarily have during the day, myself included. All the photos are technically long exposures too, so my subjects have to stay relatively still while I take the photo. In these moments I try to capture something personal, a time of reflection, even if it’s only for a second. 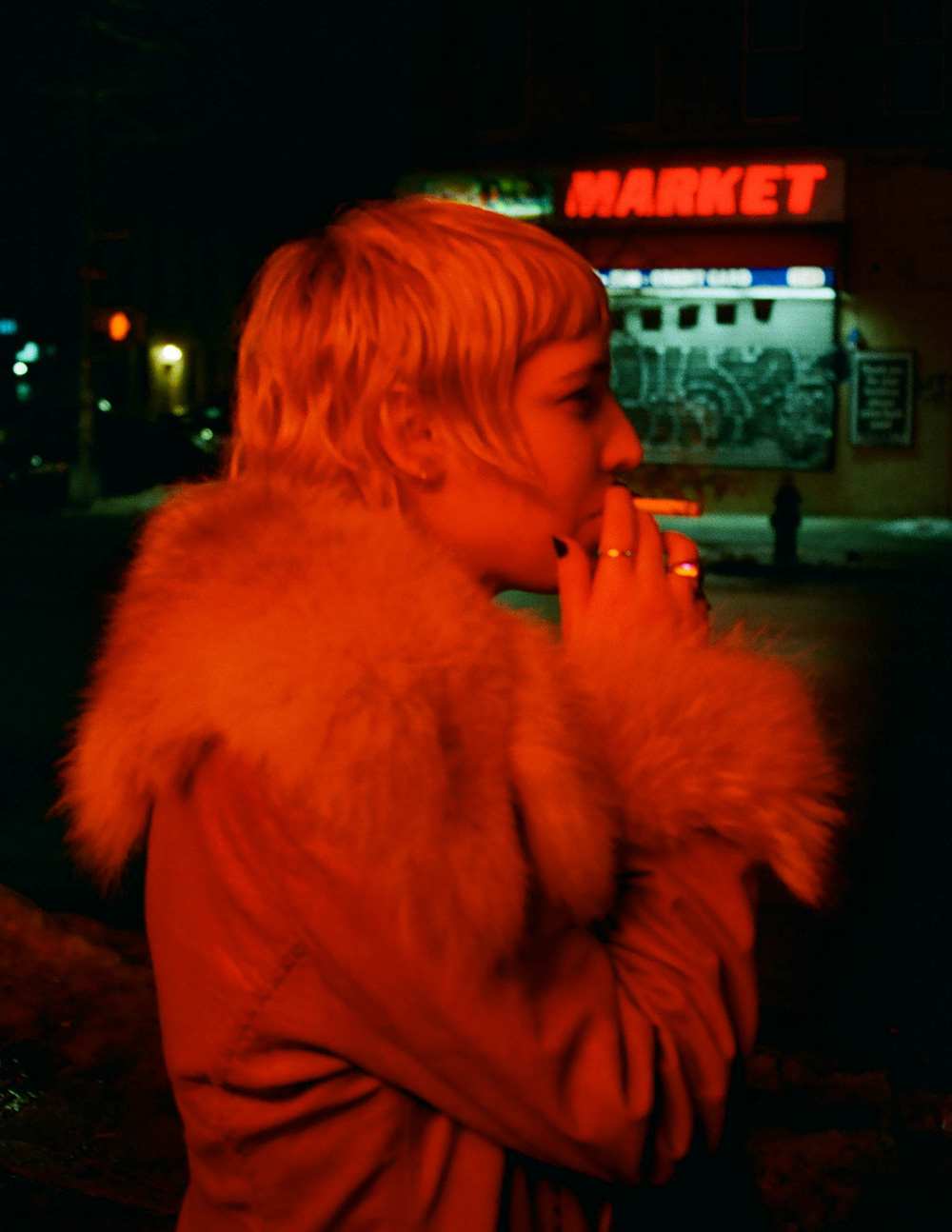 Are you trying to portray something specific with “I Like You Better At Night”?

My friends always joke about me being overly obsessed with colored lighting at night, so the title is somewhat of a play off of my obsession. But really it’s about figuring yourself out day to night, being young, and just the overall feeling of loving the city you live in and being with the people you love.

What made you want to create a zine with this series?

I was tired of only having my photos exist online and not in a real, tangible sense. Printing photos is such a lost art in the age of social media. With the intimacy that I was trying to portray in the photos, having them exist in print allows the viewer to interact with the photos in an intimate way as well, rather than just scrolling by them on their phone.

What are you attracted to the most in a photograph? Why?

Lighting, one hundred percent. Photography is defined as the recording of light, and the way that light portrays itself throughout our 24-hour cycle is endless. From natural to artificial light, colors and objects appear in so many different ways. If you want to tell a story all you need is light. And my favorite way to tell a story is through a secret, like light peeking out from a hidden little corner. 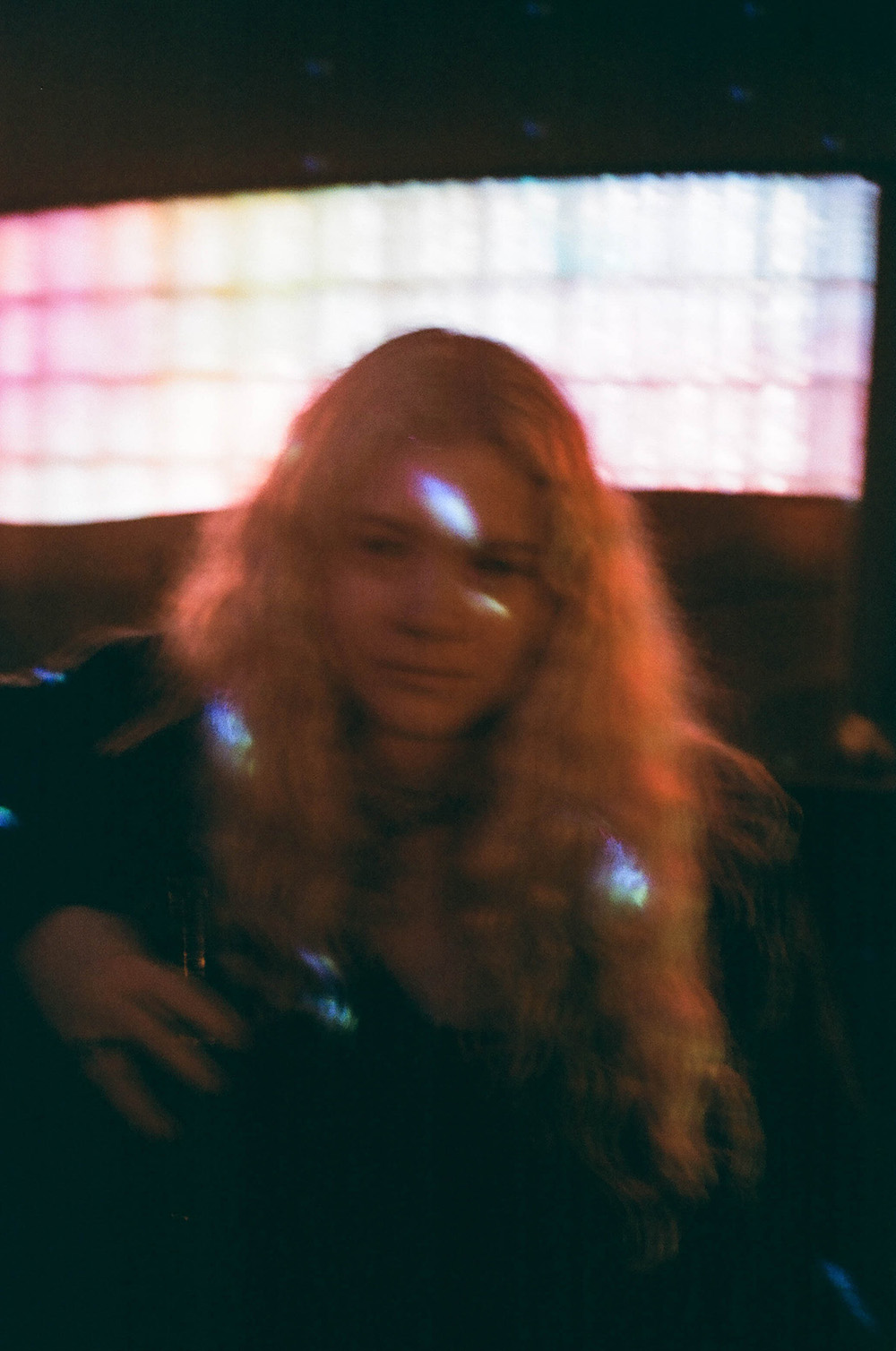 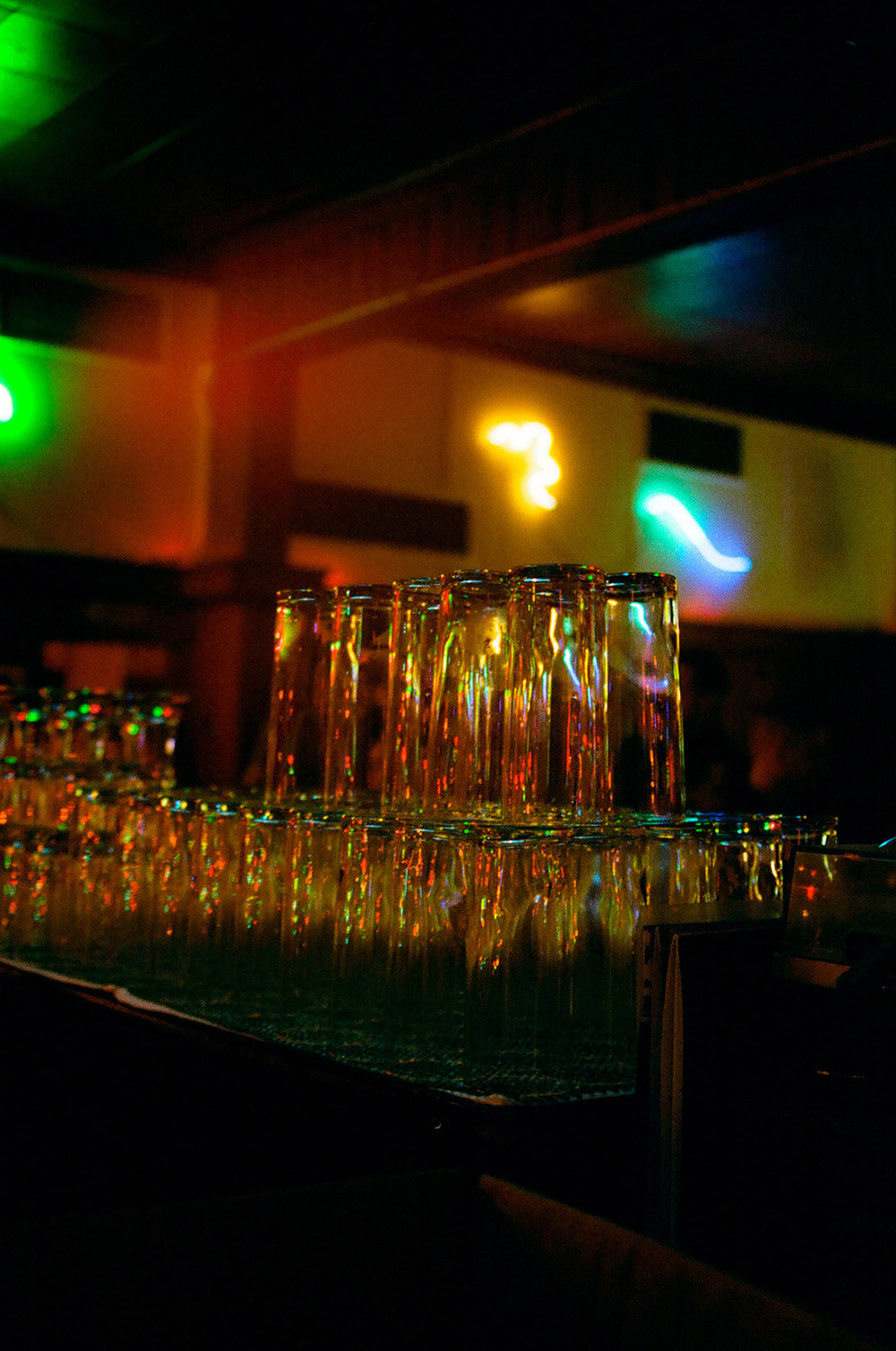 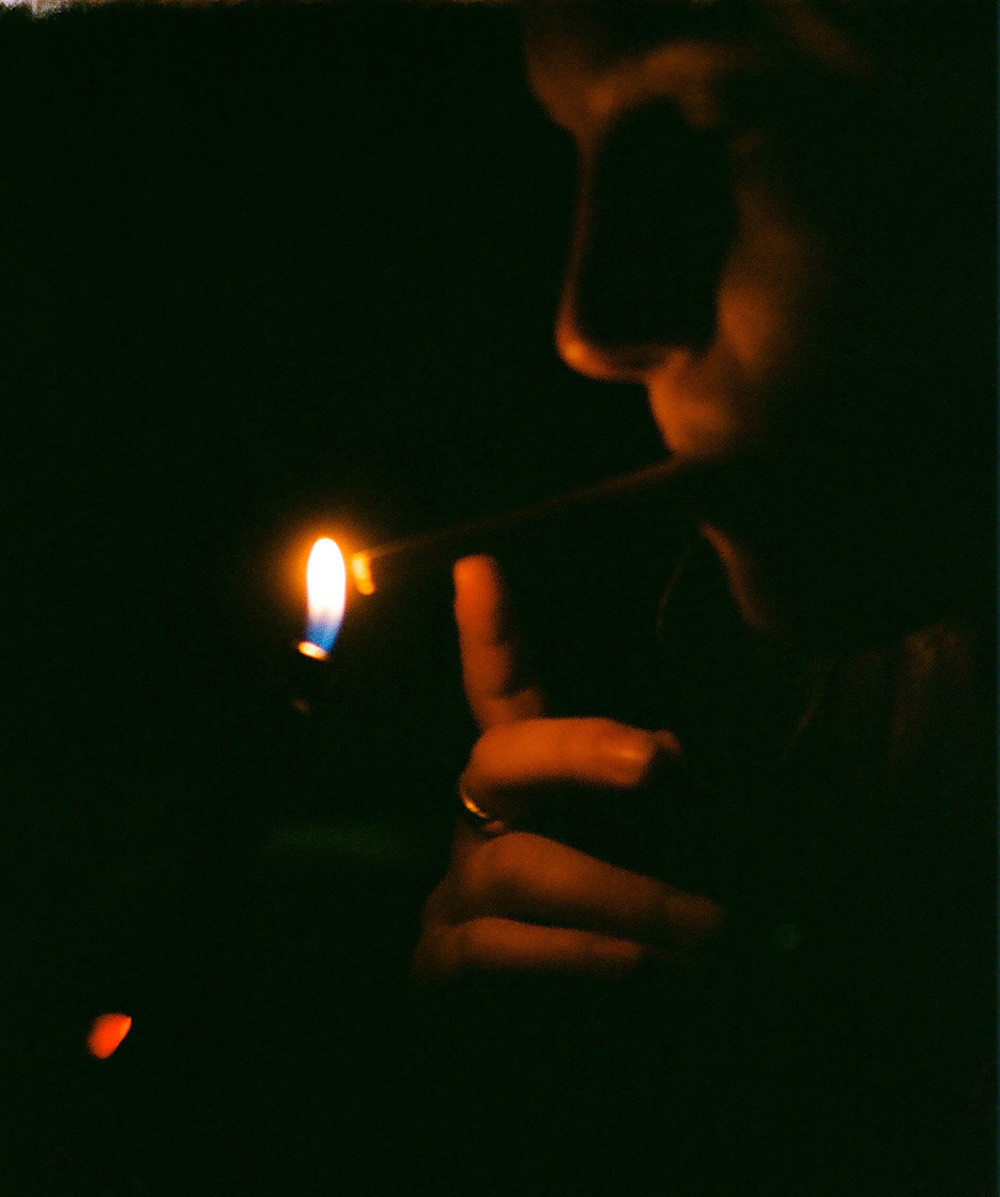 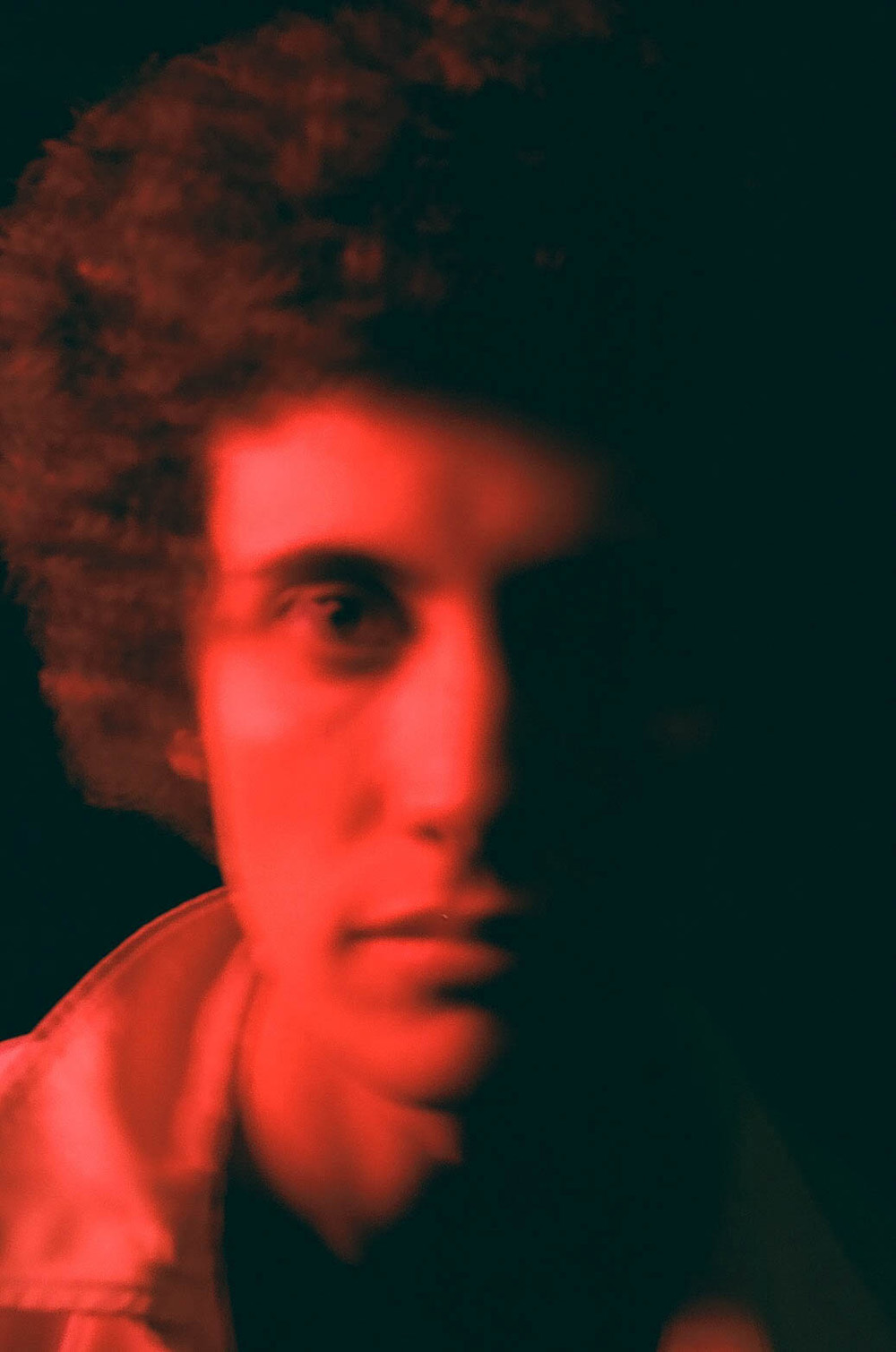