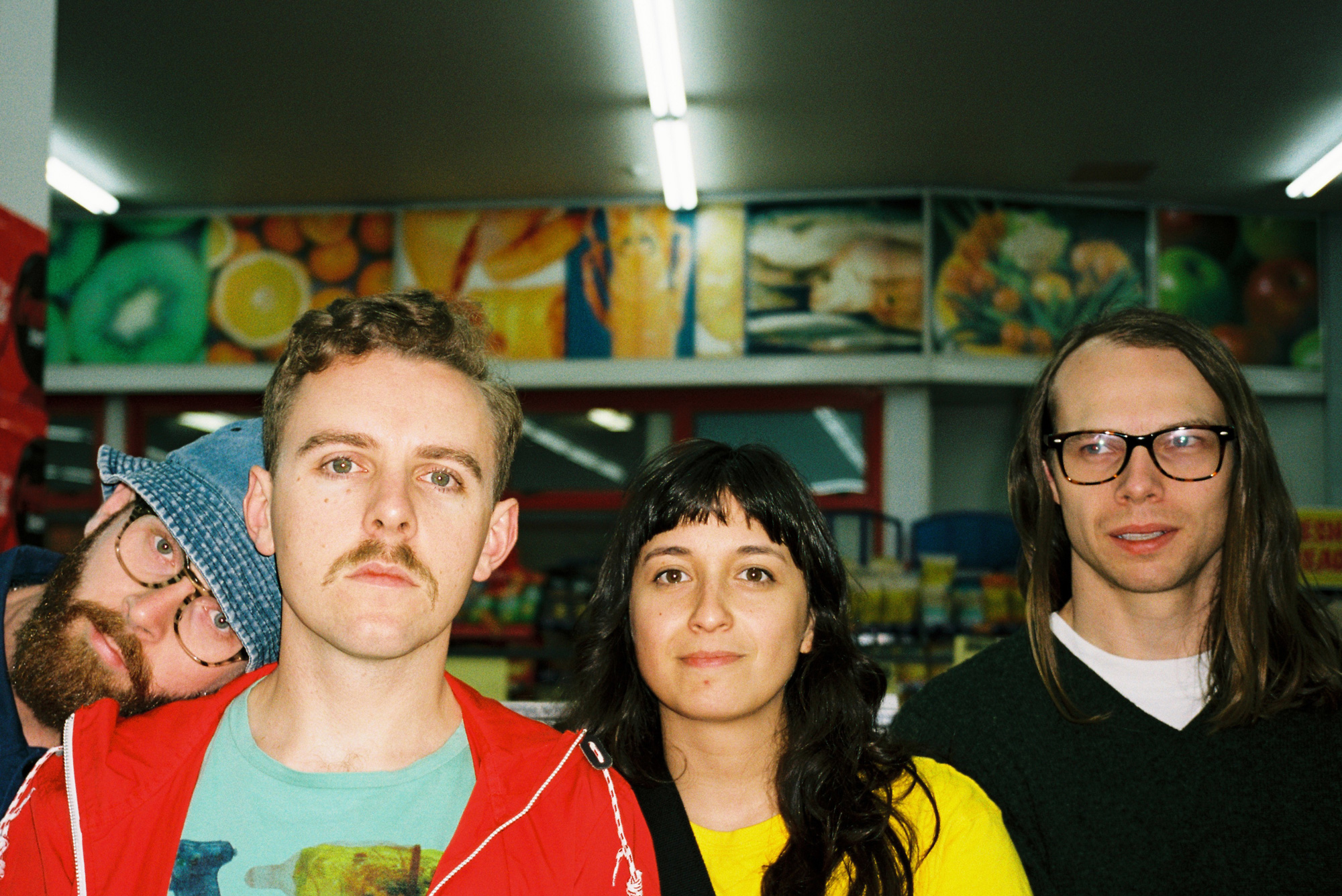 Liz Stokes of The Beths and I Talk About Not Being Good With Titles!

“Everyone that I know is broken and has fell for it before,” Elizabeth Stokes of The Beths sings cooly with just a hint of a callous undertone. What does “it” refer to exactly? The whole “well-designed woe” of love, of course. “Future Me Hates Me” is a heavy title and not only is it their opening song on Friday night at the Roxy (also happens to be their first US show of the lengthy tour), it’s also the title track New Zealand’s the Beths debut record.

It’s a song detailing the worries of heartbreak and drowning yourself in self-loathing before the love’s even begun. I feel like being callous kind of comes with the territory when you’re as apprehensive as Liz Stokes is about falling in love. The majority of the LP deals with that sort of dichotomy: the fear of falling love vs. saying “fuck it,” throwing your hands up and letting a relationship swallow you whole. There are some breaks from total self-deprecation and pessimism like the more heartwarming track, “Not Running.” It deals with the latter of the troubling dichotomy whereas Stokes assures her lover she won’t run away when true feelings are spoken and she “feels [them] in fear.”

With songs so purely candid, The Beths, made up of Elizabeth Stokes, Jonathan Pearce, Benjamin Sinclair, and Ivan Luketina-Johnston, they’ve cultivated a tight-knit fanbase. I wasn’t sure what to expect walking into the Roxy on Friday night. My friends and I love the Beths, the press seems to love The Beths, but wasn’t sure how well a small indie rock group from New Zealand could sell a show. Those not in the room drew the short end of the stick. Sure, it wasn’t a sold-out crowd, but the absence of people held no light to the well-received performance as the fans singing back the lyrics were enough to fill up for lost space.

The Beths (“The Beths: the international edition” includes drummer Katie Ham and bassist Chris Pearce) confidently crushed their catchy opener to move onto the equally as catchy, “Uptown Girl.” This tune is arguably the most punchy, punk-driven song of the record and for good reason as that chorus will mow you down. Singing “I will go out tonight/I’m gonna drink the whole town dry/Put poison in my wine/Hope you’re the one who dies” felt absurdly appropriate on a Friday night in the heart of Hollywood. The group blazed through their set, but it didn’t feel rushed. It felt more like a group of friends absolutely smashing it and having fun while they do it. As I previously mentioned, most songs deal with self-deprecation and fearing love. You know, all of the fun things that make us human. “Little Death” was the breather the crowd needed to be reminded that not all love is treacherous. This song especially exemplified the fantastic backing vocals from the rest of the band. Though the title of the tracks stands to be a bit misleading, “little death” refers to the moment your heart skips a bit, your legs give out, and “you feel three glasses in” when you see that someone.

I had the pleasure of phoning frontwoman Liz Stokes the day of their show to talk about the evolution of her musical identity leading up to the Beths, going on tour with Death Cab for Cutie, and the strange success of “Whatever” from Reddit.

First of all, I read that you (Liz) and Jonathan went to school together… so with the both of you being musicians was being a band together always in the back of your mind?

Maybe… we went to high school together playing in different bands but then we studied at jazz school together and played together in a lot of different ways. Then he shot me an email and asked me to write some songs so he could record them. That’s when I probably started thinking about starting a project.

When he had you write songs, is that when Benjamin and Ivan joined you guys?

Yeah, yeah. A little bit later, we were all talking about starting a band, so it was perfect timing.

I read you were in an indie-folk band before? Beths are obviously a lot louder and poppier. Did you always want to write electric guitar driven music and was fronting the Beths kind of a reaction to your past with indie folk?

A little bit. I think the reason I fell into indie folk is that I was playing with my best friend Chelsea, who still makes music and is a big part of my life… when we were making music together as two teenage girls, something about playing the acoustic guitar just seems a lot more accessible. There were a lot of women playing in the local scene. Being a singer-songwriter feels more accessible and being in a rock band feels real far away. When I wanted to start this project I wanted to learn how to write for electric guitar, how to play it… and all the gear. I really enjoyed it.

So was that the biggest difference for you? Learning how to write music for the electric guitar?

It was quite different. Like even small things like learning how to play with a pick… I’m air quoting “I’m gonna start this project” and I was trying to figure out what I wanted to sound like. It was really fun. I was actively listening really hard to guitar arrangements and what the drums were doing and things like that.

Was there anything that influenced your style of writing with the Beths?

There’s a lot that influenced the sound that ended up within the band… As far as the songwriting, I’m not sure. I just like writing. I like writing a pop song with the verses and choruses and all that.

So like you said earlier, you all went to jazz school together, was there ever a thought to pursue that genre?

Not with this band… we were playing a lot of music with each other. This band was definitely more of a reaction to jazz school.

Being a trained jazz musician, do you think that affects your songwriting still now?

Was there a moment when you first started writing songs for the group that you thought “oh yeah this is good.” Because every song on the album is just so good.

Thanks so much! Ahhh I don’t know. They weren’t initially all good. The first set we played together, there’s one song or maybe two that ended up on the EP. We were kinda bad for a while. When we first started, none of us could sing very well. But we were enjoying it so we pushed through it. There was a point when we were playing and it wasn’t just our friends coming to the shows. We started seeing more and more people that we didn’t know.

Yeah, when you don’t have to beg your friends to show up…

Yeah, but it’s also bittersweet because you’re like awww… but they’ve been to 20 shows so they can chill now.

Did you ever think you’d reach people in other countries? And you’re opening for Death Cab for Cutie in Europe?!

I’m really excited about that.

Did it seem like it all happened really fast?

Uh.. well kind of? When were releasing the EP, we were touring over UK and Europe. While that was happening, we could see more people coming to shows and saying like “oh I just found you guys yesterday!” so that made it feel more real than just things on the internet. It was all really directly influenced by things on the internet!

Yeah, two of my friends actually introduced me to you guys and they saw you randomly on Reddit, your video “Whatever.” Then they saw you at a little loft in LA…. you guys were playing cricket…

Yeah haha, the Reddit thing is strange! It’s actually launched a lot of things for us. We released our EP in New Zealand and people liked it there, but then Tim Ellis, who edited “Whatever,” uploaded it to Reddit and it was on the page for a day and a half… and got 25,000 views. That’s big for a small New Zealand band. That was back in 2016… and that was when things started happening outside of New Zealand.

I guess it sounds like a short amount of time because your album came out about 2 months ago? But you’ve been going at it since 2016 so it must feel good to have some sort of validation.

Yeah, the album feels like it’s been a long time coming. It does feel a bit fast sometimes but mostly feels regular pace day to day as far as organizing things.

And how did the whole Death Cab thing come about? Did they just reach out to you?

Kind of! I got like a bunch of people messaging me on Instagram and they said Ben Gibbard shared your album on Instagram. I literally screamed and thought nothing would come of it. Then we were asked to have a spot on the tour. And I said, “Nah I think we’re busy. Just kidding!”

Did you listen to Death Cab growing up?

I so did. I guess everybody did, but obviously “Transatlanticism.”  It’s exciting.

Oh god, amazing. So the United States, then Europe… and you’re opening up for Bloc Party as well?

Yeah, in New Zealand! This tour coming up in Europe is actually just a headlining tour for The Beths, then Death Cab in January, and then we have a break briefly in New Zealand. We’re doing a show for the Breeders…

No, no the Breede…

Oh! The Breeders! I thought you said Leon Bridges and that would have been really interesting. Oh wow, the Breeders! That’s going to be sick. That’s wild because I assume they influenced you guys a bit?

Yeah definitely! I love the Deals.

So about the album, how does the writing process usually work?

Normally I’ll write a melody and guitar lines, stuff like that. Then I’ll come back to the band and everyone will come up with their own sounds.

Yeah totally, the arrangement. I think it’s much better than what i’d come up with on my own.

I really wanted to ask about the album title. Future Me Hates Me is a fairly loaded album title… it’s a catchy pop song that hides behind fairly self-deprecating… Was there a reason you chose that song as the title track?

So, coming up with names is not a strong point for me. We tried to think of other things….

Did you guys have any other ideas?

Not really.. We were trying to think of another lyric or something… Eh, it went fine. It did fairly well.

With so many artists coming out New Zealand and Australia, are there any other bands we should be keeping an eye on?

Ah yeah! If you haven’t heard of my friend Chelsea as I mentioned before… her name’s Chelsea Jade. She’s the one I played with growing up.

Ah, no way. I’ve been seeing her everywhere!

Yeah, she’s bloody great. Her album just came out, Personal Best. She’s killin’ it. Also, another one would definitely be Wax Chattels. They’re on Captured Tracks… also killing it. I know they’ll be in LA in October, they’re gonna be touring as well. If you get a chance to see them live… they’re like the best live band in the world….

So I suppose we already talked about your future plans as far as touring and such… anything else we should be looking out for like videos?

Um….we’re working on…I wonder if i should keep this a secret. We’re working on something for Christmas time… so we’ll see how that goes.