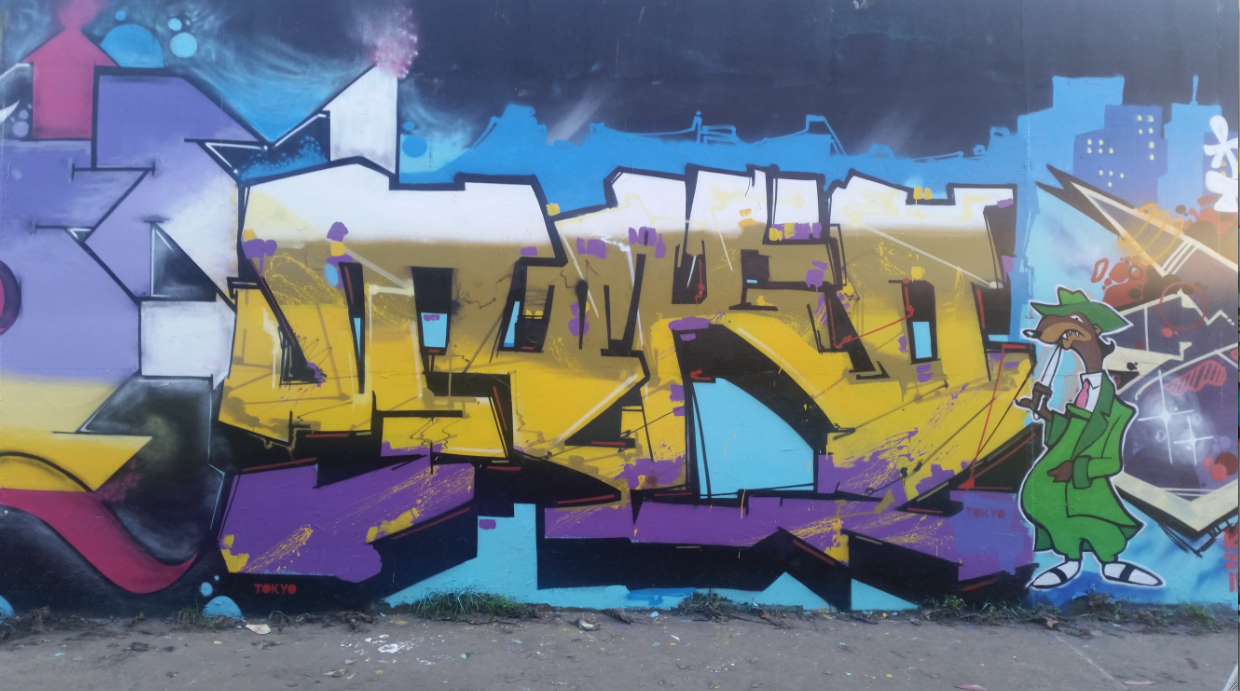 Tokyo709 got his start early. At a young age, the stylish graffiti writer was slowly, but surely becoming immersed and ultimately absorbed into his Polish city’s street art community. What started out as routine – days consisting of dreaming, drawing, practicing and visiting his local paint shop for that new can of spray paint – ultimately turned into something of unflinching habit of nearly 20 years.

After vowing to sketch three pieces a day, and making perfecting his craft his main priority, Tokyo709 has sketched an infinite amount of graffiti-driven pieces. Translating pen onto paper, Tokyo 709’s demonstrates a more precise and visually appealing graffiti style which can be found in his numerous black books and infinite tally of hand-drawn pieces.

Asserting the perfection of technique over all else, Tokyo709’s style and tireless work ethic has led to opportunities to collaborate with dozens of graffiti artists around the world, and in turn compelling him to create the well-known graffiti crew, DreamTeam Internationale. A group birthed in 2013, DreamTeam Internationale connects hip-hop and graffiti across the globe. DreamTeam knocks down boundaries with bulldozer-like qualities, allowing writers to enlist based on one finite detail: have the same positive mentality towards different cultures and ideas, and foster an environment that will inspire current and future members.

We had the chance to catch up the passionate street artist, where he gave us insight into the graffiti culture he knows best, working relentlessly to further push his unique style, and what he’s looking forward to with his busy year of collaborations. Check out some of the work from fellow DreamTeam Internationale members in the photo gallery below.

I’m Tokyo709; a Graffiti Artist using this name since 2008. I paint graffiti on walls, canvases and specialize in graffiti sketches. Before the tag ”Tokyo,” I used to paint other names, but can not tell them here (need to keep it secret). I was always inspired by other cultures, countries and cities therefore I somehow  came up with Tokyo, as I love Japan and always wanted to live there. There are two other places that I would love to live, which are New York and Berlin, but couldn’t create anything that was good, so I guess Samurai’s Land was the perfect one.

Tell us about your first interaction with graffiti?

I think it all started when I did my first graffiti sketch around 1997 at primary school. It started from there, but going back even further… when I was 10 years old I did my first 3D letters. I It was 1994, and we had to do write the whole alphabet for the ‘technical project,’ and I think that was the initial beginning, as I did around ten different alphabets instead of just one. Furthermore, I basically disappeared from the real world as I got fully absorbed by graffiti. There was no day without sketching, not a day without thinking of graffiti, dreaming, talking and painting, and visiting paint shops if they got new spray cans in stock.

What medium did you start with?

I started sketching on paper with pencils and pilot markers. Later I moved on to painting walls. I was buying cheap spray cans from car shops to paint on walls The legendary spray can was the Champions Colors, which was similar to the Krylon spray can from The States. Other spray can brands such as Festiva, Hit Color, Dupli, Montana were used in the early years.

How have your surroundings and upbringing influenced your subjects and style?

Let me paint a clear picture for you. When I was a kid I would stay up until like 2 am practicing graffiti in my room. My mum would always come into my room and say, “Switch off the light,” and to stop painting because I was wasting electricity. This was a good message to never give up. It made me realize that no matter what obstacle came my way I had to keep pushing. Not sure if my surroundings necessarily influenced my style but it influence my hard work ethic.

In what ways are the development of sketching, personal style and skill necessary in progressing as an artist?

Well it is all about practice and having a creative vision as an artist. With sketching, I’ve done thousands of sketches of my ‘Tokyo’ name. One day around 2009 I came up with an idea to do at least 3 sketches a day. I thought that would be the best way to develop the Tokyo style, and carried on sketching every single day for a year or two. I started the mission with very basic letters and built it up from there. I noticed a progression in the style and lettering after merely a few weeks.

Before I became Tokyo I was sketching a lot too, but this was a different project, as I just wanted to push my graffiti skills further. In one week I was sketching approximately 21 sketches, so in first year I did around 500 sketches. In the first year of this project I kept track of my progress by hanging them on the wall with dates indicated on them. I remember days when other writers kept asking how many sketches I had done that day. My answer was, “Well, just 4 and I will be working on the 5th before going to bed.”

The second year of this sketch mission was different as I started University and had less time to do them. If I didn’t sketch on Monday and Tuesday – that was 6 sketches – then on Wednesday I had to do 9 all together. This idea had spawned another project of in order to make use of them, and culminated in ”Tokyo709 Sketchbook”. This project collects sketches drawn in recent years and will be scanned and edited into a book that demonstrates the progression of style. Simple sketches in the front of the book, more complex in the back. I want people to be able to start doing graffiti by using my book as a progress template. When I started sketching in 1997 there were no books or tutorials that I could use to learn graffiti from, and I had to use trial and error method; spending time with other writers. Hopefully my sketchbook will be a great tool.

Coming back to sketching I kept sketching for 4-5 years till 2015. The conclusion from my mission is: The magic of a graffiti sketch is hidden in white paper and black marker (or black pencil). They are best friends and by pairing them together you can create your own style. By using this along with passion and hard work I created my own style: Samurai’s Sword Style with clean letters and thin precise lines on walls, which differentiates amongst others.

Tell me about your creative process? How do you artistically prepare from working with larger pieces versus smaller?

Basically first step is a vision. I need to be influenced by something that surrounds me; it can be anything (colors, shapes, letters…etc.) that can get in to my head and I can work on it later on. Then the next thing is a sketch, letters, 3D etc. I have prepared thousands of sketches in my life that I could paint for another 25 years, but every time I am trying to push myself to do something different to raise a level up because I love it. Graffiti is a beautiful form of art and it can take you somewhere, you become a different person. Smaller pieces like canvases or anything like that can be framed and is like working on sketch.

What is the DreamTeam Internationale? Who are the artists working with you and how does this group influence your work?

DreamTeam Internationale is my little ”baby”, and a project that I always wanted to do early on, mostly when I was a little kid. It emerged around 2013 and it unites people connected to Hip Hop culture from around the world. No matter where you’re from, what color skin you have or what you believe in, you can still be a member of the Team. One for all, all for one. One passion. One love. One dream.

The aim of this is not all about painting whole cars in every city in the world (which actually is a brilliant idea and there are teams that do it), there is no pressure to paint illegal stuff. The aim is to rep the Team, rep hip-hop.  At the moment there are 8 graffiti artists: Felipe Talu (Brazil), Qubek (UK), Kurst (UK), Tokyo709 (France, Poland), Trion (Italy), Lord (Italy), Werd (USA), Rene (Sweden), plus I am a DJ and Bboy. They are all brilliant people. They have fantastic graffiti skills and they really pushing it hard. One team that has graffiti artists from different parts of the world, from different countries where each has grown up around different styles, ideas, characters, and mentality, but they all connected by one vision. I think that’s incredible. Hopefully we will get MORE new members in 2016.

What are some projects or collaborations you are working on right now?

I am still working on the ”Tokyo709 Sketchbook,’’ which takes a lot of time with scanning and editing sketches. Hopefully I will finish it off before the end of the year, but I wouldn’t be surprised if it will take little a bit longer. Then the release of sketchbook will be on my 20th anniversary of painting graffiti in 2017.  There are lots of events and projects coming this year so I’m sure its gonna be pretty busy. As non related graffiti projects there are quite a few: I am going to look after the Notts County U10’s football girls where I am a youth coach. This is fantastic. I will concentrate on the freestyle football tutorials for beginners. I have plenty of tricks to present so it might take a long time.

What is graffiti art to you?

Graffiti is another form of art, but with letters. It is the way that you want to express yourself, to be different than the other writers by working on personal style. Style in graffiti is the most important thing; it differentiates you amongst others, even if you don’t paint your name everyone will notice,  “Ah ok that was done by this guy because of this particular style.” You can find millions of styles out there, actually millions, but you have to come up with something new, something original, something that represents you. Graffiti to me… I love to spend hours, (of course legally) even days on one piece on wall painting line by line, improvising, testing new things working on the line (straight, thin, thick etc…) using stencils, getting deeper in it basically. It’s like when playing piano you want to play like Frederic Chopin so you follow all the steps slowly; what he did and then try it out yourself. In addition I am not a big fan of painting one piece for ages on every spot, as I need a change, it is just boring to me. Also graffiti should be more hardcore, illegal, cities should be bombed and trains of course. Tags should be seen on the streets. Graffiti writers should be ”visible” on the street. Coming back to my early years of painting, when you were getting into my city by train you would know where you are getting to by seeing fourteen 2×2-meter, massive tags on a station street. I might be wrong, but this is how I see it. 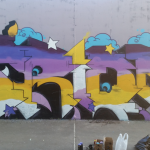 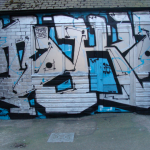 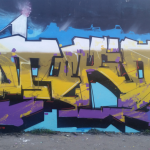 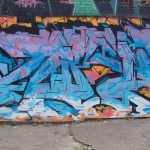 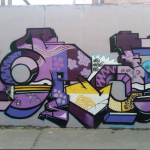 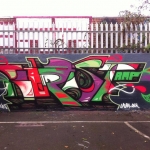 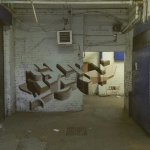 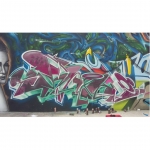