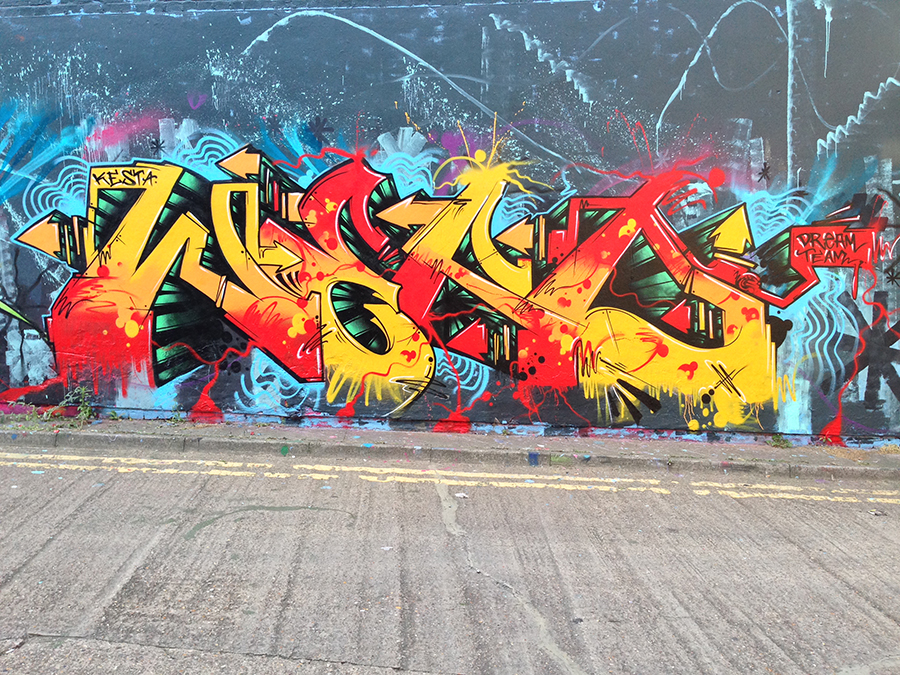 At a young age, dexterous New York City graffiti artist WERD, found himself inspired by the well-known reality show that captured the famously eclectic tattoo shop, Miami Ink. Watching, redrawing, recreating and finding motivation from the wide array of professional tattoos seen on the program, WERD began to learn the art of drawing, ultimately influencing his unique style that can be seen along some of New York City’s neighborhood streets.

After attending the Fashion Institute of Technology and making connections with creative people alike, WERD began taking his spray-painting abilities more seriously. Continuously drawn to the graffiti mecca that is 5Pointz in Long Island City, WERD has found his own distinct style through ongoing motivation from his own artistic peers.

From working with a range of mediums and artists in the states to traveling overseas to work with recognized graffiti group, Montana Shop Nottingham, WERD has quickly learned to work with small to massive canvases, never ceasing his own desire to continuously learn, create, and collaborate.

WERD took the time to speak with amadeus about his dream to create that one dope piece, collaborating with friends and the stigma that comes with creating graffiti.

Tell us about yourself and your artistic background.

My interest in art led to me studying graphic design at a community college on Long Island. My favorite courses were ones that focused on typography because you had to be creative with the letters – just like graffiti. I continued my studies at the Fashion Institute of Technology, which was a great experience. Besides learning more about the aesthetic side of design, I was taught to think conceptually and visually solve problems. The environment at FIT was stimulating because growing up on LI was like living in a fucking bubble. Meeting kids from different parts of the city and world was a cultural eye opener. I hung around with a group of Neat! Individuals who inspired me to sleep less and work hard who still have an influence on my creative lifestyle today. One of those people was an artist named KESTA. I painted with him a lot during college and still to this day. We recently did a pro-bono mural at my old high school.

How long have you been spray painting for? What influenced you to begin creating street art?

I guess around 2010/11 I started taking the medium of spray painting seriously. I was always curious how graffiti artists were able to paint beautiful pieces with a can of spray paint. So I figured I’d give it a go, and my goal was to paint one dope piece. Lets just say I still haven’t painted that “one dope piece” because I’m still painting.

New York is a major destination for street artists and their craft. What is it like having these types of influences around you when you were first getting your start?

In general, when it comes to having work ethic, New Yorkers hustle. There are so many piecers, bombers and street artists putting in work that motivates me on a daily basis. I used to take the train to 5Pointz in Long Island City just to study the pieces. Being exposed to this put a fire under my ass and motivated me to paint more. During the summer of 2014 I was painting this spot where ZESO painted almost every weekend. He’s good at juxtaposing letters and characters. Besides being talented, I’m influenced by his dedication…he puts in work!

How did you get the experience it requires to spray paint a wall, building, etc? How difficult is it to make that transition from small to large canvasses?

Practice, practice and more practice. A lot of trial and error, mistakes and “happy accidents” happen during the process; which end up teaching you a new way to do something. Funny thing is, I was never really into canvases or keeping a sketch book like most artists. I do sketch before doing a piece, but keep it real loose and it’s usually on the back of printed emails from work. I recently started working on canvases last year with a dope artist – Angelo Giokas. Since I prefer to work large, working small is hard, but Angelo taught me a lot when it comes to the canvas game, and we got more work coming!

Was there any particular influence for you and your style of graffiti?

That’s always a hard question to answer because I grab influence from all around me. Sometimes style/technique rubs off from the people you paint with on the reg. My boy KESTA taught me an ill 3D effect, which I still use most of the time. In general I like checking out what other writers are doing overseas. Graffiti artists that break the “rules.” Lots of writers fill in their piece, outline it, add highlights, 3D effect and a “forcefield” line. It’s interesting when people get abstract with their piece and use the surface to their advantage by making the wall part of their piece.

My connection with Nottingham goes back to 2013 when I studied abroad there. The Montana Shop in Nottingham is run by this graffiti artist DILK and his girlfriend Sylvie. When I first met them they treated me as if I were family — told me where to go paint in Nottingham as well as other spots in Europe. After leaving I kept in touch with DILK, Sylvie and the other artists I met – Tokio being one of them. Tokio put me down with his crew, Dream Team International. He’s like my brother over there, and was nice enough to welcome me into his home twice this year (May and September). I managed to paint 15 pieces over there this year, and one of those pieces lives in Flo Skatepark. Before my second trip Dilk and Sylvie were bringing artist back and forth to the space at Flo Skatepark to beautify the walls. I happened to be in Nottingham at the right time and they invited me to be part of it. I was stoked when I walked in there, especially when I saw the huge piece Sweet Toof painted! It was an honor to be able to throw down amongst a bunch of artists who I respect.

Traveling and painting in England has had a big influence on my work. The scene over there is dope, and I learned a lot from painting with other writers, especially Tokio. When I was over there in May he introduced me to two Italian twin brothers – LORD and TRION from Leicester. They are part of the crew and let me stay with them in Leicester for a few days. It was awesome and fucking surreal how different it is overseas. For example: we went to the shop, bought paint and got directions to this spot called MORSES. We had to hop a fence and climb down to this creek, which was a graffiti writer’s paradise. There was a wall that might have gone on for about a mile, and me and the Italian brothers rocked some big burners down there. I can talk about my experience over there for days! I recommend traveling and painting to any artist, and I plan on going back soon.

Talk to me about the stigma that comes with being a street artist. Do you still find people considering your art “vandalism?”

I had an interesting experience when some angry lady driving a fancy car stopped, got out and told me the mural was crap and didn’t belong in the neighborhood. The best part about this situation was that I was painting the word KNOWLEDGE…I guess she didn’t know how to read, ha!

I understand that this form of art isn’t for everyone but it pisses me off when people say its bad for the youth/community. What about the ads on the subway promoting breast implants, and plastic surgery? Is that what you want your son/daughter looking at. I think a colorful wall is a better source of inspiration compared to some of the shitty advertising being thrown in our faces everyday.

I got my eyes on all of them, haha! 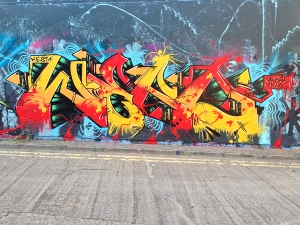 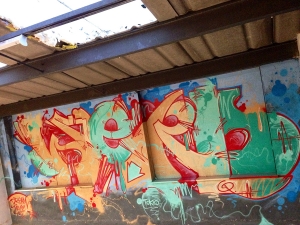 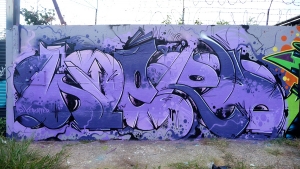 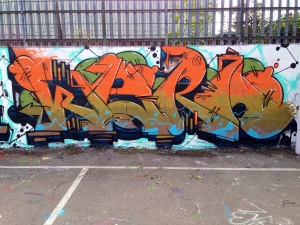 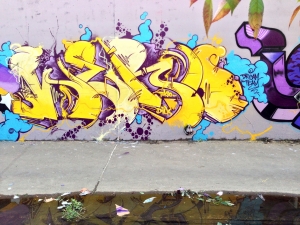 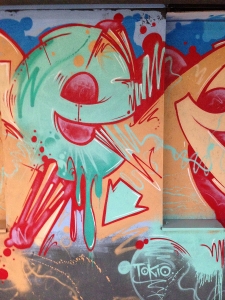