We Ate the Acid: The Mysticism of Joe Roberts

The inside of Joe Roberts’ mind must be quite disorienting. I imagine a deep dive into the psyche of the San Francisco-based artist, whose work breaks from the conventions of visionary art to explore new ways of depicting the psychedelic experience, is like stepping into one of his unapologetically hallucinogenic paintings: a world of cascading cosmic imagery, pop culture symbols, and shifting geometric mandalas and patterns. The walls might feel like they’re closing in on you, but the cacophony of shapes and colors fuels a curious euphoria that leads you onward through the trippy hallways of Roberts’ mind.

We Ate the Acid, Roberts’ new book published by Anthology Editions, is the latest product of his visionary journey and a testament to his expansive, singular imagination. Along with Roberts’ unpretentious paintings, the 140-page book presents original drawings, collages and surrealistic scenes of everything from UFO sightings amongst cityscapes, to candid still-life’s in nature. Amongst smiley faces, dancing Kokopelli, and Grateful Dead stealies, the book chronicles a range of fantastical imagery that carries a childlike wonder and begs the viewer to join the experience themselves. 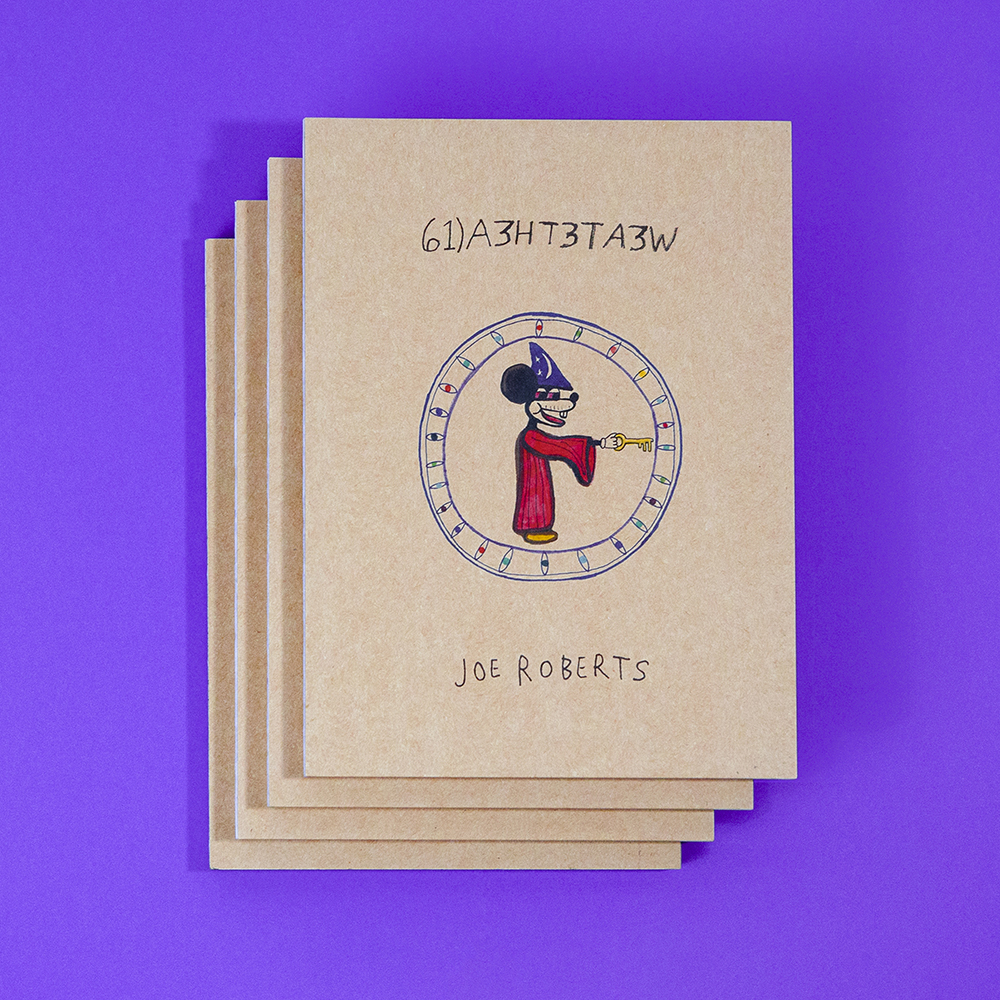 Tell us about your upbringing. You grew up in Milwaukee, Wisconsin, what was that like?

Yes, I grew up in Milwaukee, Wisconsin. My father was a librarian and my mother an engineer. I have two younger sisters and a bunch of dogs. I spent most of my time skateboarding around my neighborhood and exploring the city.

What do you think sparked your initial interest in art?

My initial interest in art came from spending time with my grandfather. He was an artist and when I would hang out with him we would work on art projects together. He basically taught me how to draw, how to paint, how to exercise my imagination, even how to ride a bike. 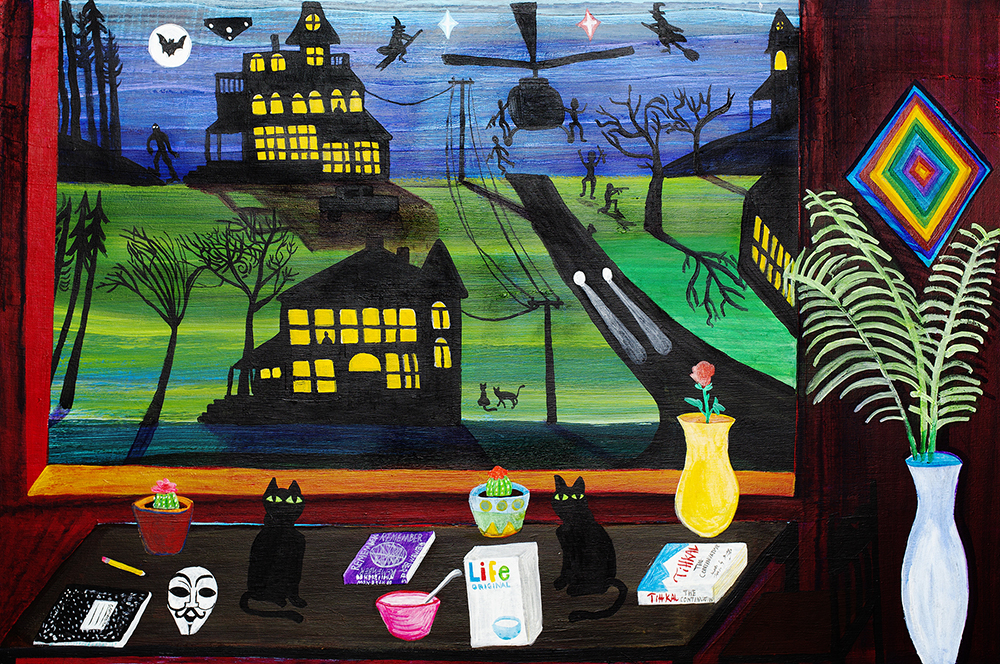 Why and when did you leave Milwaukee?

I left Milwaukee in the late 90s because I wanted to see what else was out there. I was really into skateboarding back then so I made my way to San Francisco since it is the best city in the world for skateboarding.

When you moved to San Francisco, what was the vibe of the city when you arrived? Describe the art community you became a part of there.

San Francisco back then was crazy, it was like the Wild West. I loved it, but at times it seemed a little too real for me. You see things in San Francisco that can’t be unseen. My day-to-day life became much more hectic than my day-to-day in Milwaukee.

The art community that I was drawn to was deeply connected to skateboarding, music, and graffiti.  I’m sure there were other things going on, but that was the world I was living in. 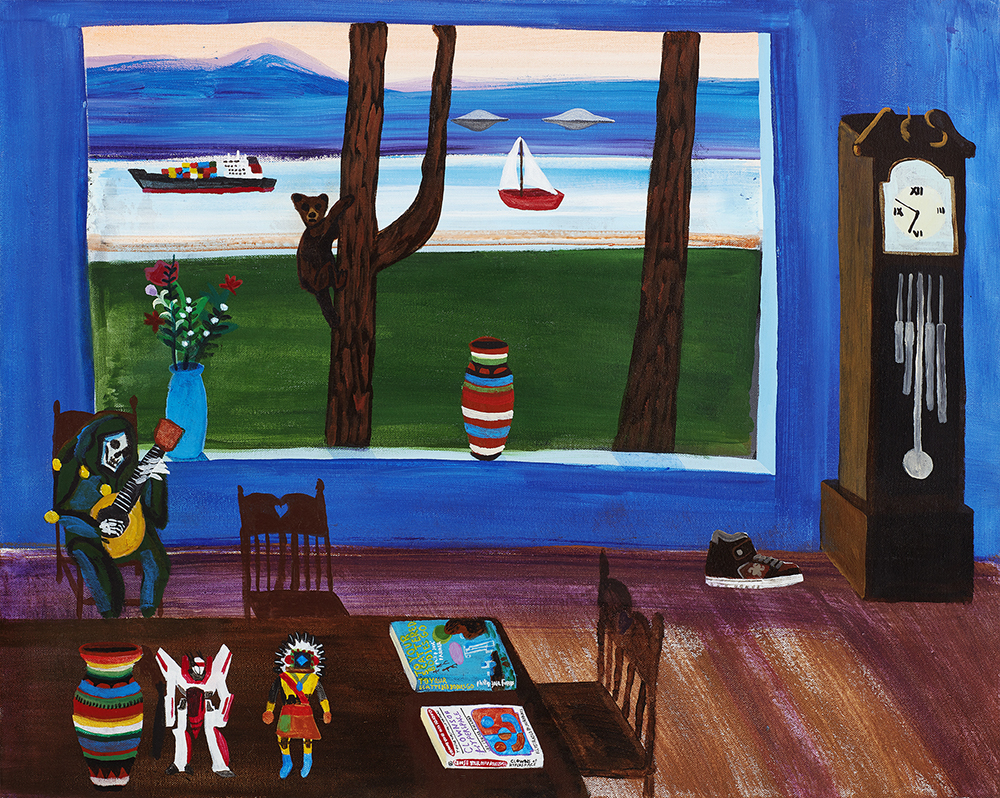 What were some of the things that you were most interested in when you first moved to SF?

When I first moved to San Francisco I mostly skateboarded a lot, ate a lot of mushrooms, went to school a little bit and worked stupid jobs just enough to pay my rent.

How and when did you realize making art was your path and started showing it to others?

Well, I’ve been making art my whole life so it kinda happened gradually over time. I guess it became my full-time path when I realized I was basically unemployable and there is nothing else I would rather do with myself. 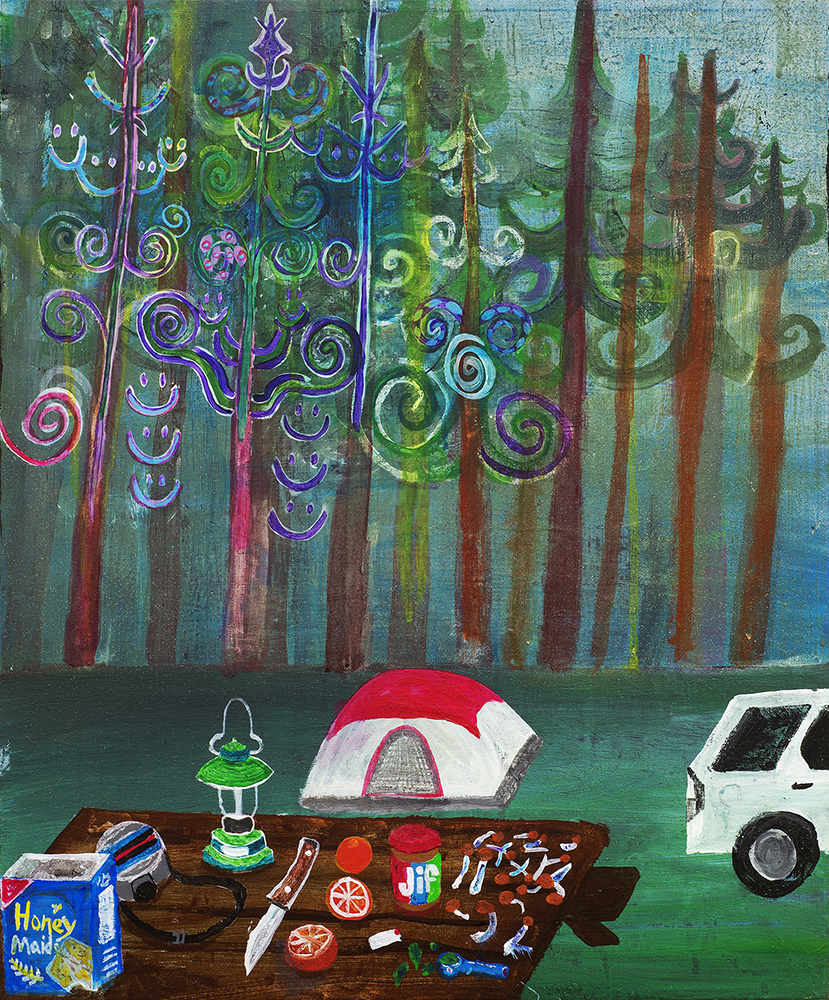 Fill me on the process behind your pieces. Where are the ideas first spawned? How much do they evolve and change during this process?

My ideas just come out of my day to day life. I pick weird things to become obsessed with and that obsession seeps into what I’m making at the time. Everything I make starts as a doodle or a note and as I work the idea out into a larger painting or drawing or whatever it is, it changes. I have no idea what something is going to look like when it is completed and I like to take my time.

How much of your work is an attempt to communicate the experience of using psychedelics?

Most of my recent work is an attempt to communicate the psychedelic experience. To be totally honest though I don’t think I do that great a job at depicting the visual part of these experiences. Maybe it will inspire other people to try psychedelics and experience for themselves. 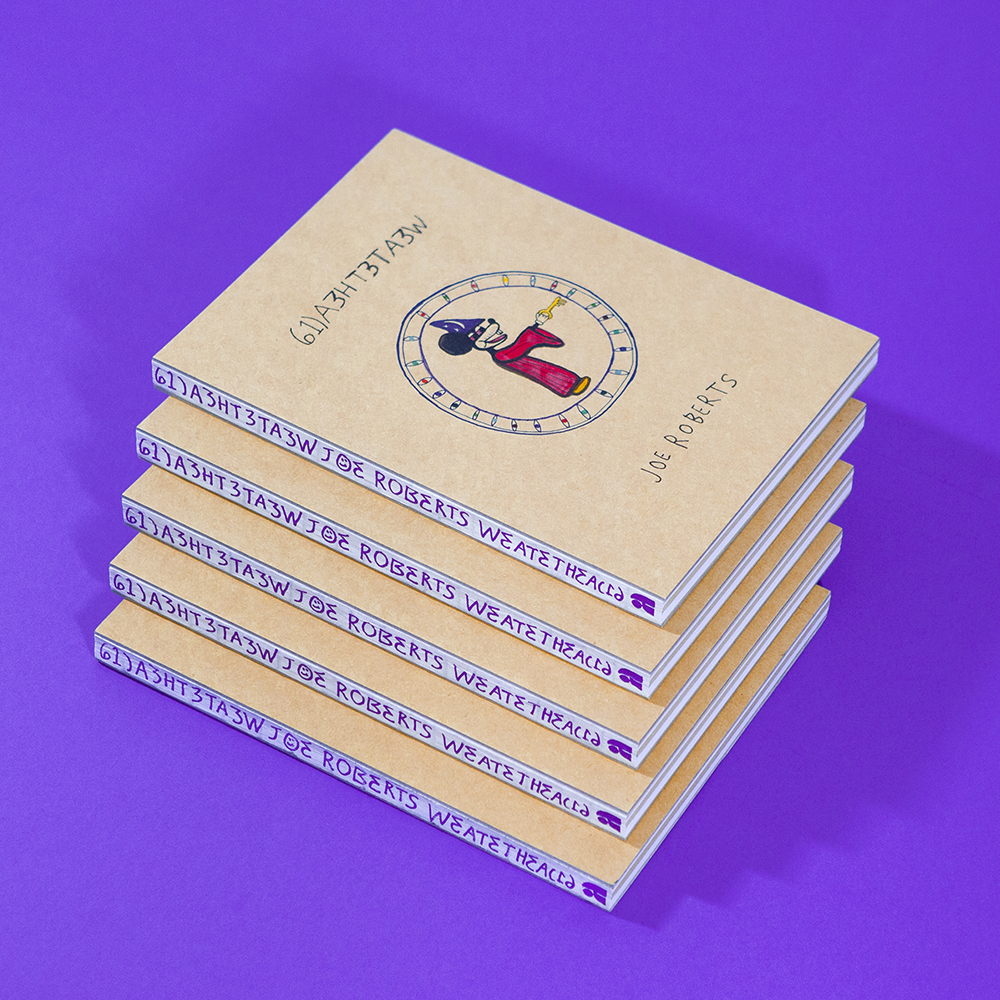 Tell me about the new book, “We Ate the Acid”. How are the pieces included in the book connected? Are they your most recent works?

All of the work in “We Ate the Acid” was made during a period of my life when I was experimenting quite a bit with psychedelics. I made the work as a way to sort of unpack and process these experiences.

Give me the lowdown on some of the recurring imagery in your work – Mickey Mouse, the Grateful Dead stealie, Kokopelli figures.

I use the same imagery as an attempt to show a certain pattern I have noticed.  All of the imagery has personal meanings to me. Some of those meanings have changed over time; some have become clearer and some have become fuzzier. Some are jokes or riddles I am repeating. Some of the meanings are very clear I think. Some of them will only make sense to me, but it is the pattern I am most interested in.  These are the images I have chosen to try and depict this pattern. 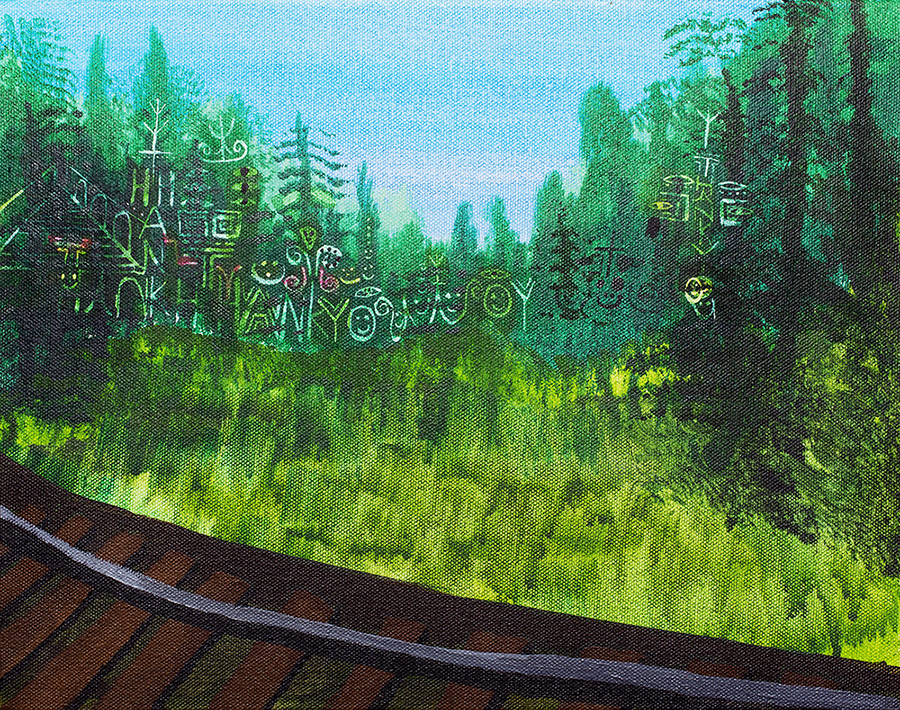 How do you think your work has evolved over the last few years? How do you keep challenging yourself to make new shit and grow?

I was thinking that I wanted to start playing with clay so perhaps that will be the next challenge. It is something I have not really worked with since I was a kid so there is plenty of room for me to explore there.