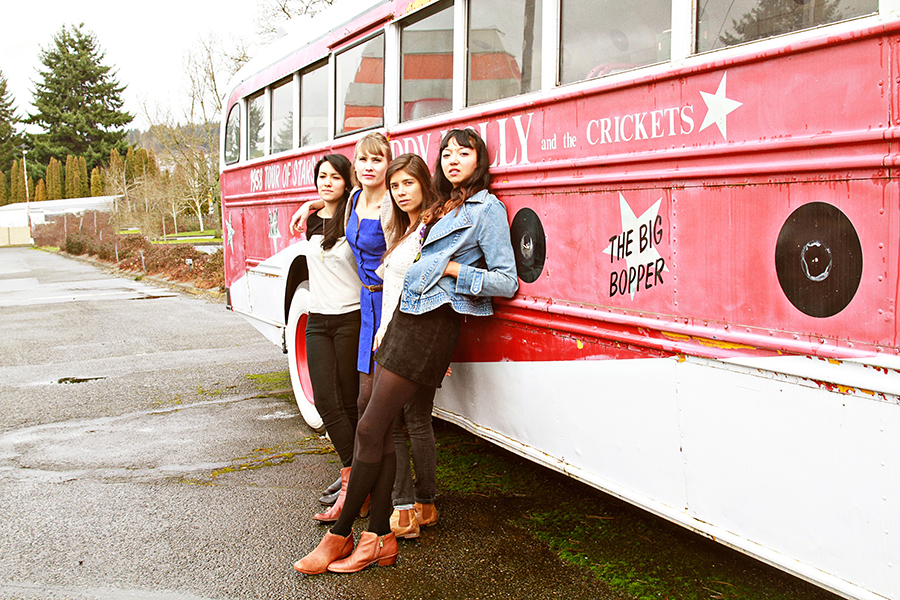 La Luz is a nostalgic powerhouse that defines their sound as “surf noir”. Their sophomore album, Weirdo Shrine, is a undoubted natural evolution of the band’s self-styled sound—layered melodies and instrumentals to provide a surf-doo-wop feel that explores a deeper root of rock embedded.

The Seattle-based foursome lather each song with energetic guitar riffs and a heaping amount of vocal harmonies that splash the surface of their 1950’s aesthetic, making for a rawer, turbo-charged sequel that charts themes of loneliness, infatuation, and obsession.

Not only have the doo-wop influenced gals relocated to Los Angeles, but La Luz plan on reinventing themselves in their new sun-soaked home for an even newer album to come in the near future. La Luz will be playing in Boise, Idaho’s Treefort Fest in late March, and are highly anticipating their favorite acts that they will be sharing the stage with including: Built to Spill, Charles Bradley, Quilt, Wimps, Mild High Club, and “too many more to name. When asked how the band would define their utopian treefort, frontwoman Shana Cleveland responded, “with many snack selections, a tape player blasting a tune to boogie to, a swinging hammock, and swift, breezy curtains blowing in the crisp Boise wind.”

La Luz are anticipating new collaborations, though many remain a secret as they explore a vast musical landscape of opportunity. With Treefort Festival right around the corner, and as part of our continued coverage, we caught up with Cleveland about the band’s new music, taking the stage in Boise, and expectations for the big weekend.

Your recent album, “Weirdo Shrine” is quite an unusual and unique title for a record – what was the inspiration behind the album name?

There’s a track on the album called “Black Hole, Weirdo Shrine”. I think a lot of art that is made has some elements of being a shrine. Something that feels holy or sacred to one person and confusing and meaningless to another.

Are there any specific processes in using that doo-wop sound and influence in order to make each song sound different from the next?

What are you guys most pumped about this year? Any possible collabs with writers, producers, or musicians?

Yeah! As is often the case in the music industry, some of our plans must remain secret.  We’re excited to start working on our next album, and to play festivals and do some traveling. We just moved to Los Angeles so I’m excited to explore this vast new place and spend lots of time at the beach.

What are the band’s expectations for the Treefort Fest?

I love Treefort fest! It really gave me a new appreciation of Boise, I can’t wait to go back and play with Built to Spill again, weeee!

When you’re not onstage, what bands are you most excited to see at Treefort Fest?

Built to Spill, Charles Bradley, Quilt, Wimps, Mild High Club, Cool Ghouls…actually, dang, SO MANY. Why are there so many good bands playing?

Lots of snacks, a mini fridge, a hammock, a tape player, and soft, light curtains blowing in the wind.

For more from La Luz, head to http://www.hardlyart.com/laluz.html.