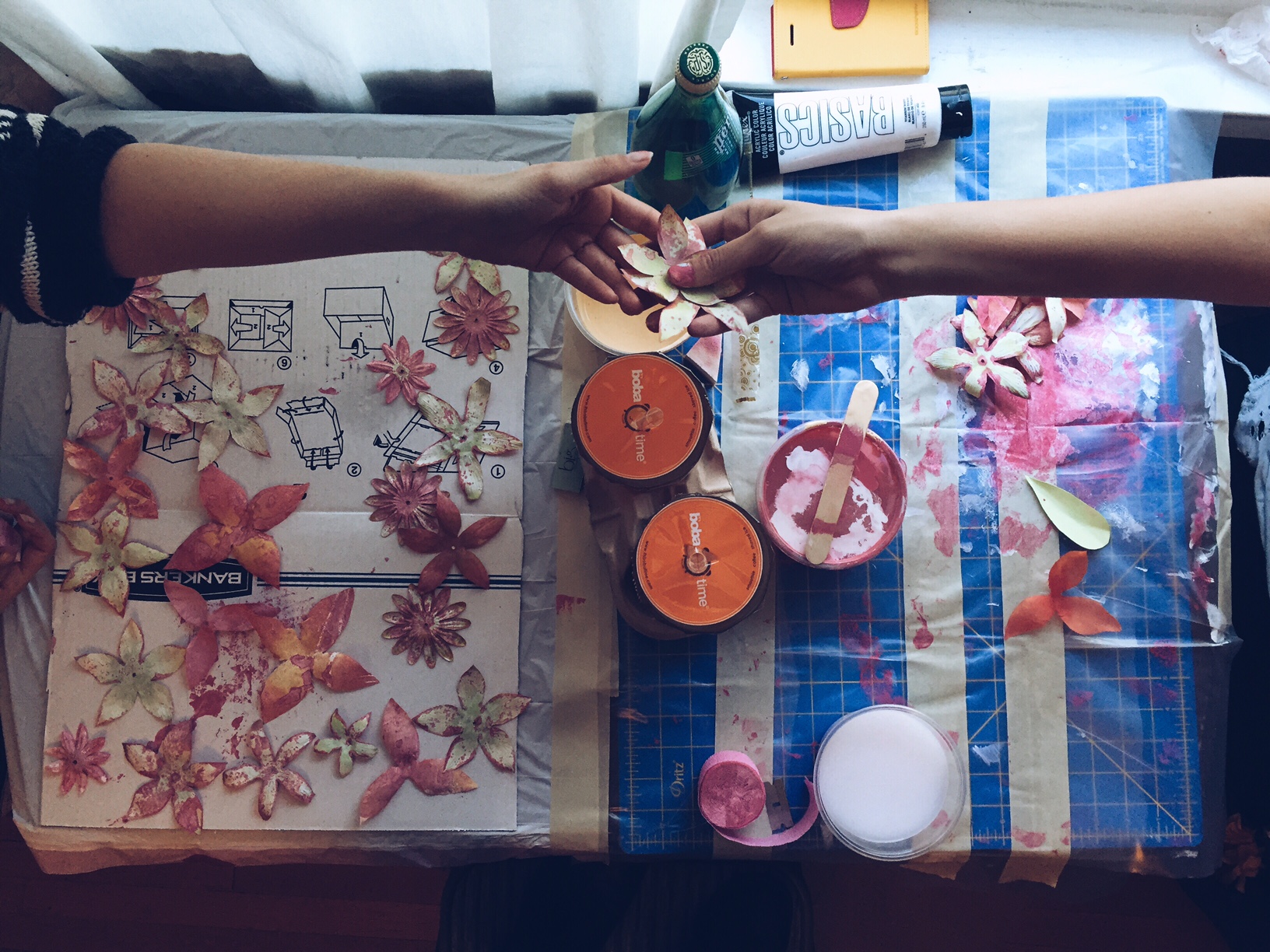 A Dream of Paper Flowers: A Film by Chelsea Bayouth and Leila Jarman

Chelsea Bayouth loves a challenge. She loves to dig her teeth in, and figure out a way to physically create what usually starts out as a scribbled note in her sketchbook. In the spirit of tangible experimentation Bayouth takes her illustrations off of the page and into the third dimension with striking sculptures and masks abundant with texture and alluring character.

Having spent the last four years working in stop-motion for Adult Swim’s Robot Chicken, and countless years prior wearing the title of everything from seamstress and costume designer to special effects designer, Bayouth has a sideways approach to materials and the forms they reveal.

Her latest project A Dream of Paper Flowers is a visual telling of one of the artist’s poem from a book of poetry she published in 2014 entitled, Beaus and Eros. Bayouth, in collaboration with filmmaker Leila Jarman, has concocted what the creative pair deem, “an experimental horror, arthouse, femme, grunge short-film.” Set against a pitch black back drop, Bayouth’s visualized words take form in a festering slug that boast boobs, and enticing compositions that undoubtedly exhibit the intricacies of its craftsmanship.

As the two prepare to screen the debut of A Dream of Paper Flowers on Febrauary 27th at Art Share – LA, we spent some time in the studio with Bayouth, who walked us through the process of her most recent project, why it may be her most fulfilling project yet, and how she has refocused on her own artistic endeavors.

Tell me about your background, I know you’re from Los Angeles.

So much. Then when I graduated from Cal Arts I started working within the arts. I was working in special effects, costuming, seamstress work; basically entry level grunt work. Then I got asked by a friend to work on Adult Swim’s Robot Chicken. I was like, “Yeah, that sounds great, but I don’t know anything about stop-motion.” I kind of lucked out there because people pilgrimage to California to work in stop-motion and it sort’ve fell into my lap. As of recently, I’ve sort of transitioned into being self-employed. I still do some work for the company, but have put the brakes on temporarily because I don’t feel like my brain is creatively turned on there. I’m just going through the motions.

Were you dealing with that struggle that most artists do at one point or another: working a full-time job, and finding less and less time for your own artistic endeavors?

Absolutely, that’s a huge struggle I have. I’m no longer in denial. I’m an artist; I’m a person who creates art. I think that way. I need time, and then I need more time. While I physically am capable of working in the fast-paced entertainment industry, I’ve been working in it for four years straight and can’t deal with only having fifteen minute breaks to scribble notes into my journal to do this and this and this, its just exhausting. I think some people are really cut out for that kind of work, I can do it and keep up, but inside it was like I was watching this tree inside of me bloom with flowers and fruit, but then die, and I would just watch them fall to the ground and die.

Tell me about your upcoming film.

I published a book of poetry in February 2014 called, Beaus and Eros. Leila Jarman read my poetry book. She came back and said she loved it and said she wanted to do a video to one of my poems. She picked a couple of poems that she liked and we narrowed it down to a few we both liked. We kind of thought about what we would want to shoot, and I don’t remember who came up with what, it was very much the both of us riffing off of one another, but we came up with the idea of a slug; this giant monster that was very femme and had breasts that would leak milk. It would crawl along and had all of this stuff seeping from it. We wanted it to be existing in an infinite black space, she handled the studio and the crew, and all people she knew.

Have you worked with filmmaker and visual artist Leila Jarman before?

Leila and I were going to work on a music video together. Her and her creative partner Mike approached me because they had a music video they were going to make and they wanted me to do some of my masks for it. It was a fully funded project, but I was also working full time so I just didn’t have the time. Leila and I kept having these meetings and she kept being like, “Let’s do a project,” but in my heart I knew I couldn’t commit because I was so busy. Then we had this one meeting and it always sticks out to me. She was like, “When can I pin you down to work on something?” I said, “I can’t do something that I don’t have the time for, because what we’re working on is going to take me along time to build.” In our case it took one week. If I were working over the course it would’ve taken one weekend every other weekend, it would’ve taken three months. Then she was like, “But I think you’re getting something wrong, this isn’t my project that I want you to work on, this is our project, your vision, your art, your poetry, OUR project.”

I didn’t quit my job, but I had an easy opportunity to take a lay off, so I took the lay off instead of extending my position. Leila and myself did the project in a week. Balls to the wall. We went to the store bought everything, cleaned out my living room, made it into a crazy slug hole and just painted, and made boobs and tits.

What about yours and Leila’s working relationship has been so fruitful and lead to such innate success?

Leila and I have this incredible communication with each other. First of all I completely adore her i think she’s hilarious and I just love her so much. But we work well together because we have a very strong business communication and we’re up front and we mean what we say. If something’s not going work we tell each other. It’s like, “Uhh I don’t think this is going to work.” We just tell each other; it makes things quick, it makes the process quick, and something about it just works. I realized that when working together, relationships are complicated, people are complicated.

We also both have skills that benefit each other. She’s incredibly good with film and directing. She knows what needs to happen in order to get from A to B, and I can make stuff. If you put anything in front of me I’ll be able to get the materials needed and know what to do in order to build it. We decided to work together and make this film. The project made me realize, “Wow this is what I’m supposed to be doing.” I don’t want to say this is the first time, but in my personal work, this is the first time that has actually happened, where I can work so easily with another person. No one gets paid here, it’s all out of our pocket.  It was just for the art of it. It sort of changed my mind about that kind of monetary stuff; if you can swing it and have the time, then do it.

You conceived this massive sculpture from nothing but your own poem; what sort of materials did you decide to use?

Mostly foam and fabric, all from my special effects days. You can make anything out of foam. I just free form fabricated this gigantic slug that lived in my living room. I took it outside one day and it lived outside where I painted it for a few days. Then the film ended up being in black and white anyway.

How did the film go from color to black and white?

I was editing with Leila and said, “What if we did black and white.” Leila thought I was crazy because I had spent so much time painting that thing. I wanted to see what it looked like in black and white and when we looked at it, we were both like, “That’s it, that’s it.” We kept going back and forth from black and white to color, but we knew black and white was it.

What are you plans on debuting the film?

We’re looking for a venue and place to screen it, with an open bar and all of that. We are just looking to get attention, and we are trying to build up hype. Why? We don’t really know. We just want people to see it. We have a lot of weird stuff to share with the world and we need a platform. The more people know about this the bigger the platform will be, then the more projects we can work on and be self-employed and share our weird brains with the world, which is the goal. We have so many more ideas.

Where do you go in LA to find inspiration?

You never know where you’re going to find inspiration; you can find inspiration anywhere, even the farmers market. Leila’s in Ecuador right now, immersing herself in a different journey. I was in Philly for a week; we have a lot of ideas we want to talk about when we get back together. Hopefully this is a stepping-stone to more projects.

People watching is always inspirational for me. I’m always wonder, “Who are you? What is your deal?” 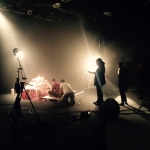 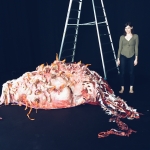 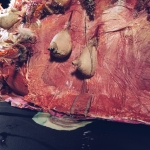 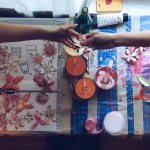 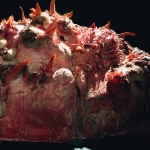 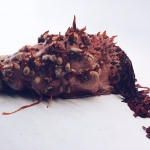 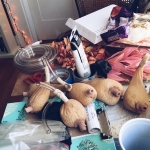 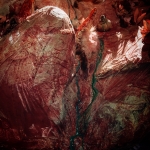