Fresno lies right in the center of the San Joaquin Valley in the southern region of California’s Central Valley. Geographically, it is very close to being right in the middle of California. It is approximately a 3-hour drive south of San Francisco, 3.5 hours north of Los Angeles, 1.5 hours south of Yosemite National Park, and 1.5 hours northeast of Sequoia National Park. It is the fifth most populous city in California. Fresno’s primary industry is in agriculture, which tops the list at number one in generating and producing the most agricultural commodities in the nation. With Fresno being one of the most populated cities in California, one would wonder what this city entails, other than it being predominantly farmland and what media has portrayed to be a meth-driven city with very high crime rates.

I recently became a Fresno transplant by way of Charlotte, North Carolina to be closer to family and didn’t know what to make of my new surroundings other than knowing where I’d be able to get fresh coconut ice cream from my new favorite paleteria, and that the commute to grandma’s bomb cooking is only ten minutes away. I am generally one to be easily amused and busy due to my jam-packed work schedule, but I found that being in this city provoked a feeling I hadn’t felt in a while—boredom. I needed an in, I needed to find my niche. I had spent a few summers in Fresno visiting my grandmother’s farm as a kid, but relocating to Fresno as an adult sort of pushed me off of my course. I am familiar with happenings in the Bay Area and in Southern California, but didn’t know what the heck was in store for me in Fresno as a creative, until someone I befriended at a coffee joint (hi, Veronica of Fulton Street Coffee Grinders!) suggested that I visit a nearby print and  publishing shop called 1418 Fulton, that carried radical zines, books, art, and film supply.

I turn the corner and open the doors to a bright, airy space filled with art and prints on the walls, photographs, and zines by various artists whose work I had admired over the internet. I stood there and thought, “Wow, this exists here? In Fresno?”. I was surprised and relieved. I was greeted by Jemimah Barba and Vicente Vasquez, powerhouses behind 1418 Fulton, which umbrellas their printing and publishing brand, Laguna Collective. I explained that I had just moved into town and wanted to better acquaint myself with Fresno through my own lens and not based off of what I had heard through media outlets and word of mouth. Jemimah welcomed me to the city and we quickly became friends after the first encounter. 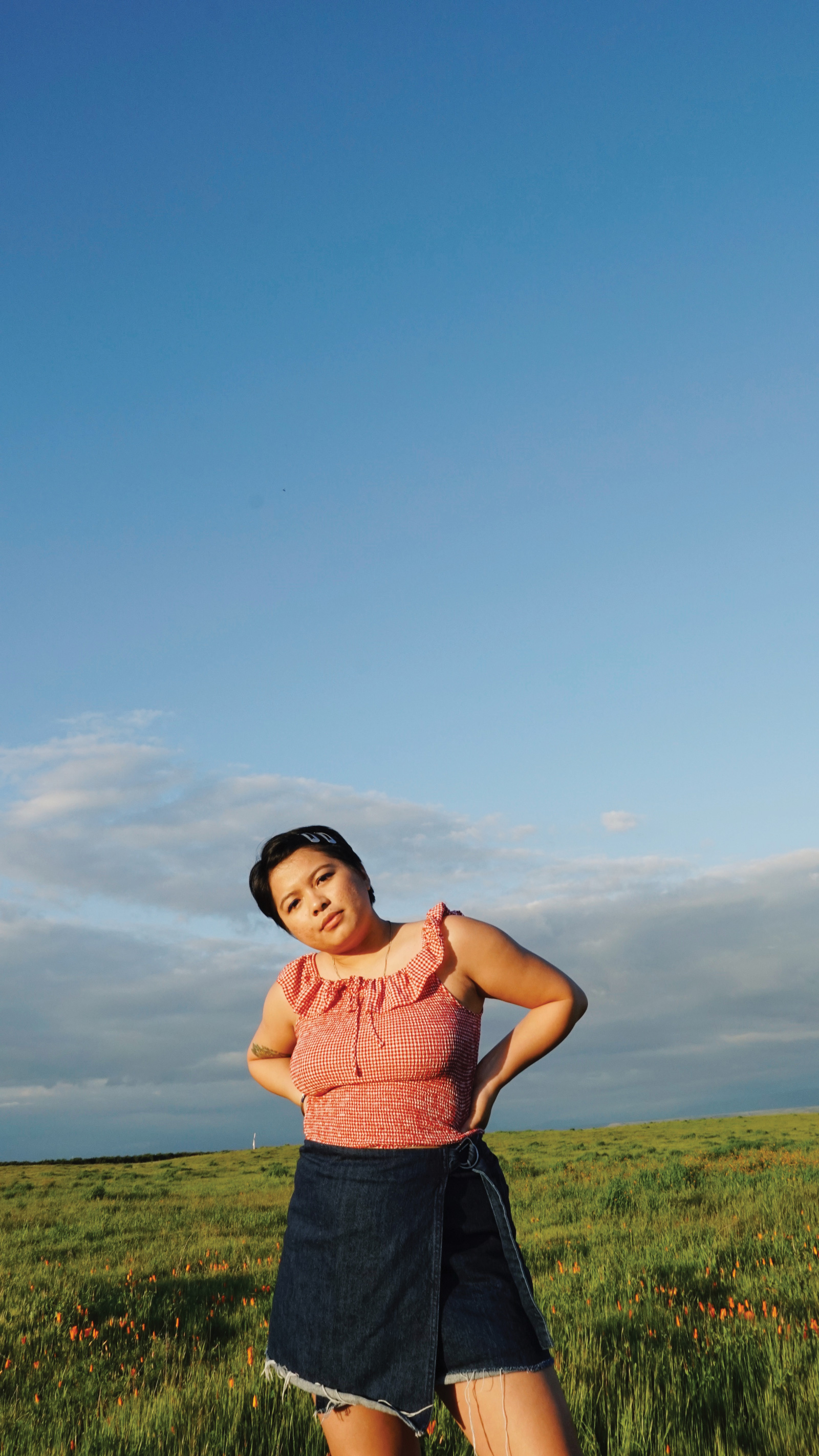 Jemimah Barba is a multifaceted individual. She is currently studying Anthropology at Fresno State while running a print/publishing shop and somehow finding time to write, curate workshops, make her own art and DJ on the side. I wanted Jemimah to show me the whereabouts of Fresno and she was ecstatic to do so.

We hopped in her Subaru, starting on our mini-expedition while she played tour guide. She knew the city like the back of her hand and took detours without even summoning her GPS. We perused some of the neighborhoods here in Fresno: Tower District, Mural District, Sunnyside, Chinatown, Downtown Fresno, Woodward Park. We stopped at a few mom and pop shops where everyone acknowledges her presence with hugs and warm smiles. It seemed like Jemimah knew everyone in the area, including people walking down the street, who were waving at her or stopping her to say hello. I grew up in the south so southern hospitality is instilled in my behavior, and seeing genuine sincerity through hospitality hit home for me. We hopped in the car again and drove out towards the rural side of town. “Oh, what’s over there? That looks like a nice spot.” Jemimah signals to the right and veers into the lane leading us to this grassy field that lies directly across free roaming cows. We took a handful of photos out in the fields and stopped by a mini fair on the way back to 1418 Fulton. She says that it’s fair and carnival season here in the Central Valley, but it looked pretty dead being that it was a Thursday night. I arrive at 1418 the following day to interview Jemimah about her thoughts on Fresno and how her efforts have impacted the community. 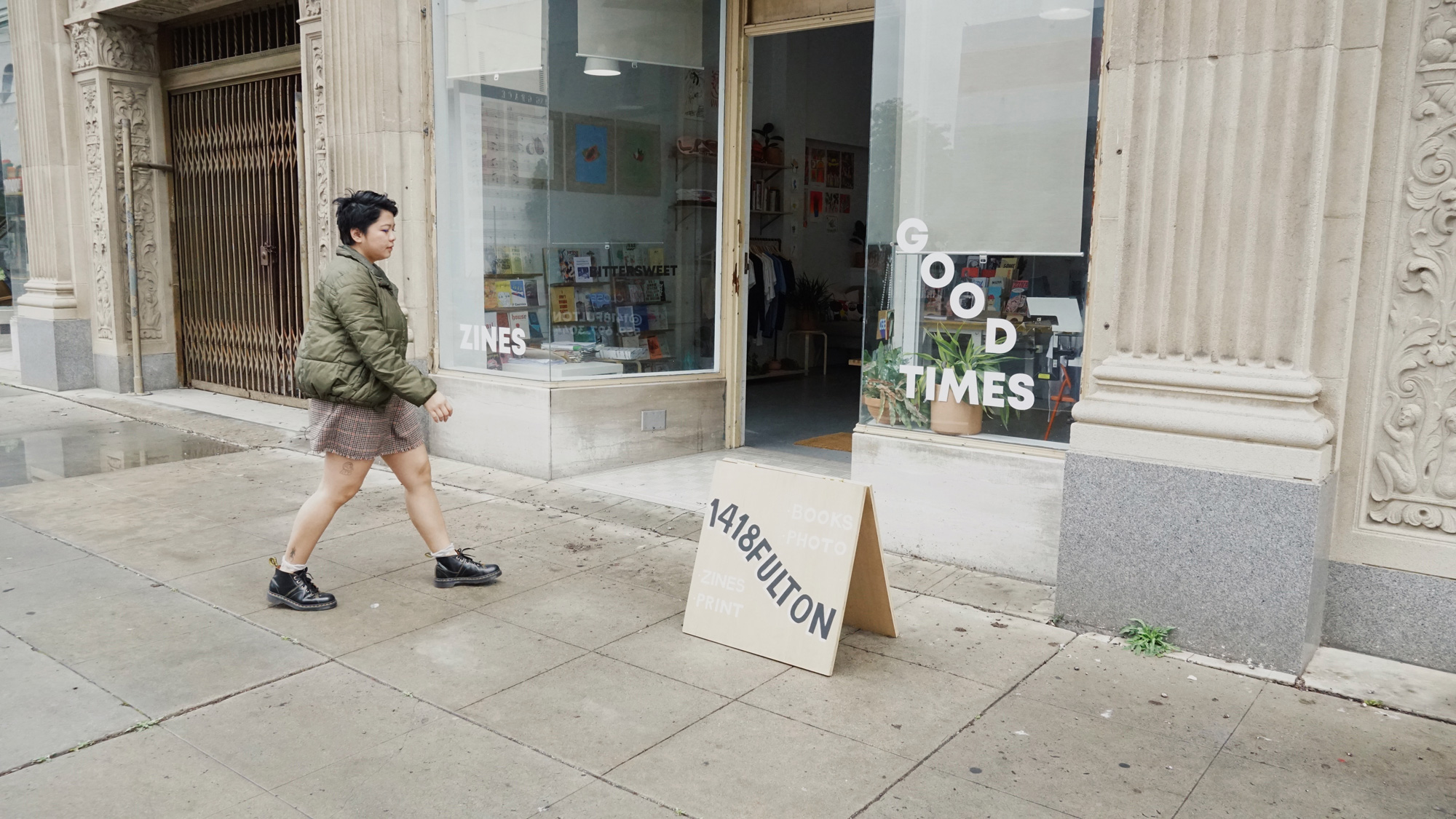 Where are you from? Where do you claim as your home?

Tell me more about Fresno.

Fresno is very interesting. It definitely has a big city feel, population wise, yet the overall community here is very small. You see the same people out going grocery shopping, eating at your favorite restaurants, and the art community is very small. There are a lot of new people coming into Fresno from all directions. It’s right in between major cities so we get a lot of cool music groups and bands that play here while on tour, and we’re pretty close to Yosemite. I love going as much as I can. Tech companies are coming in, so people have been relocating here. Some of the bigger cities are getting very expensive to live in and the cost of living in Fresno is more reasonable. It’s really cool because I feel like It’s easy to be a part of Fresno because there aren’t any elitist groups of people, which makes it very humbling. People are very welcoming here and laid back. Like many people who live in one area for a long time, I have a love/hate relationship with Fresno, but I fight to love it. It’s my home, the happenings here have definitely influenced the way I think about everything. 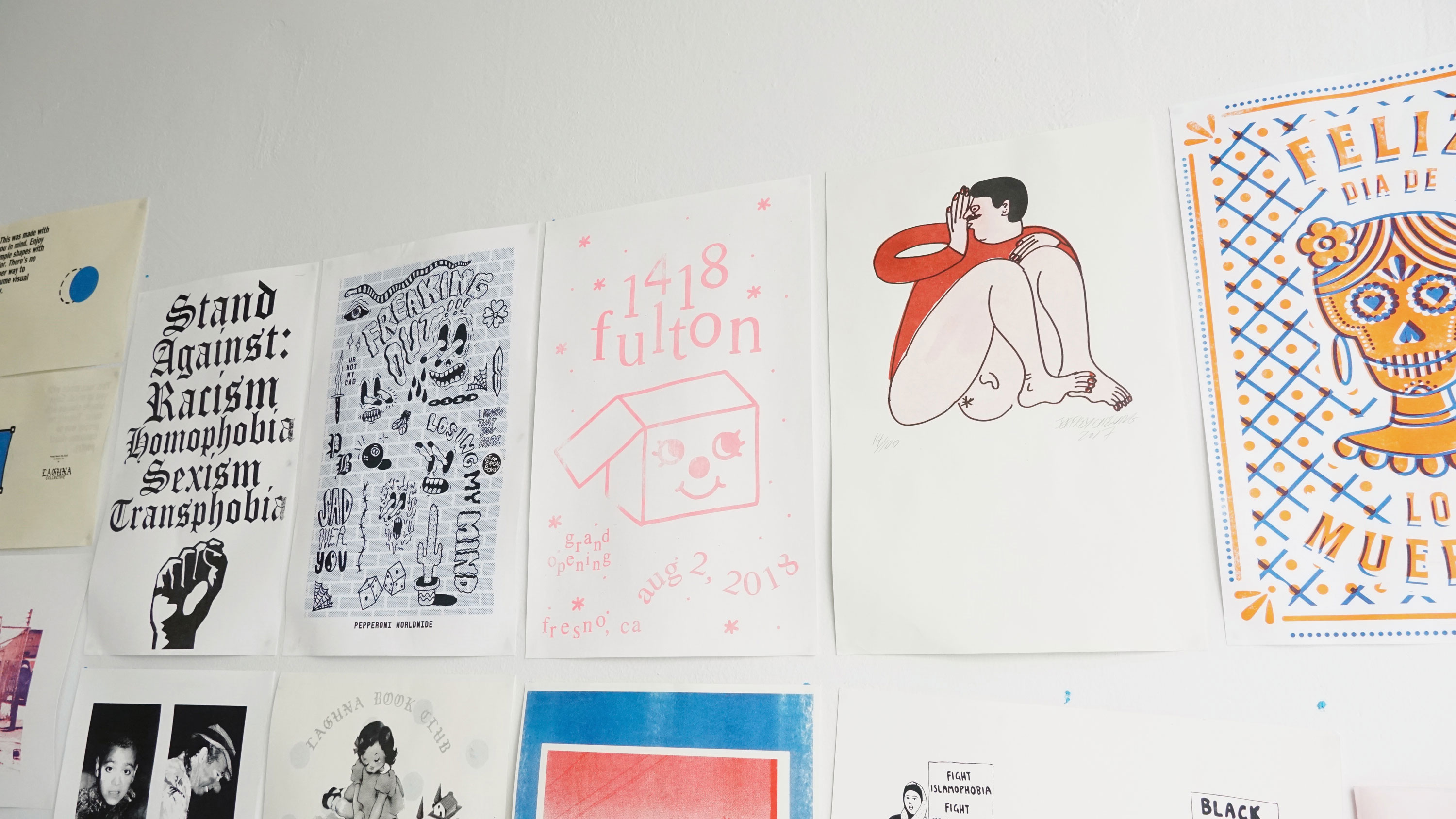 I’ve noticed that many people have a love/hate relationship with the city they live in. Why do you feel the need to fight in order to love Fresno?

The media likes to prey on “small” towns like Fresno. Vice News recently did an entire documentary about meth addiction here, calling it the meth capital, when that title isn’t true and really, this is a nationwide epidemic. These media outlets are very set on portraying Fresno as this problematic place driven by gangs and drugs. Yes, there are big issues with homelessness, poverty, and drug addiction, just as there are in other cities, but I also think that they overlook the amazing things that we have. Fresno is an agricultural town. The majority of Fresno sits on lush, beautiful land with fertile soil and a lot of history lies within the inner city. I’ve driven you around, you’ve seen the different districts and seen the buildings that are full of history. What about those parts of Fresno? Why can’t we be known for that? Why do we have to be known as the meth capital? Why can’t we be known for the history of hip-hop or dancing here? The dancing style known as “popping” originated here in Fresno. There’s a big B-boying and B-girling culture here. The family that bailed Angela Davis out of prison was actually from Fresno. Why don’t we hear about that? There’s definitely a fight to love Fresno.

Overall, there is a mainstream idea of what Fresno is, but we, the people, pride ourselves in knowing the beautiful things about Fresno. I think that being proud of where you’re from is important because it keeps the history alive and makes it harder to erase. When you think of California, you don’t think about Fresno; you think about LA and San Francisco. It’s hard for people to find the good things because the gems are hidden. I really like it here. I have to fight to love this place by educating people too. What we bring to the table, as people of color, shows that we are capable of amazing things through Laguna Collective, through 1418 Fulton. We don’t have to be in one of the major cities in order to do the things that we think are beautiful. We can find beauty in our own place. We’re really just trying to reclaim our city. 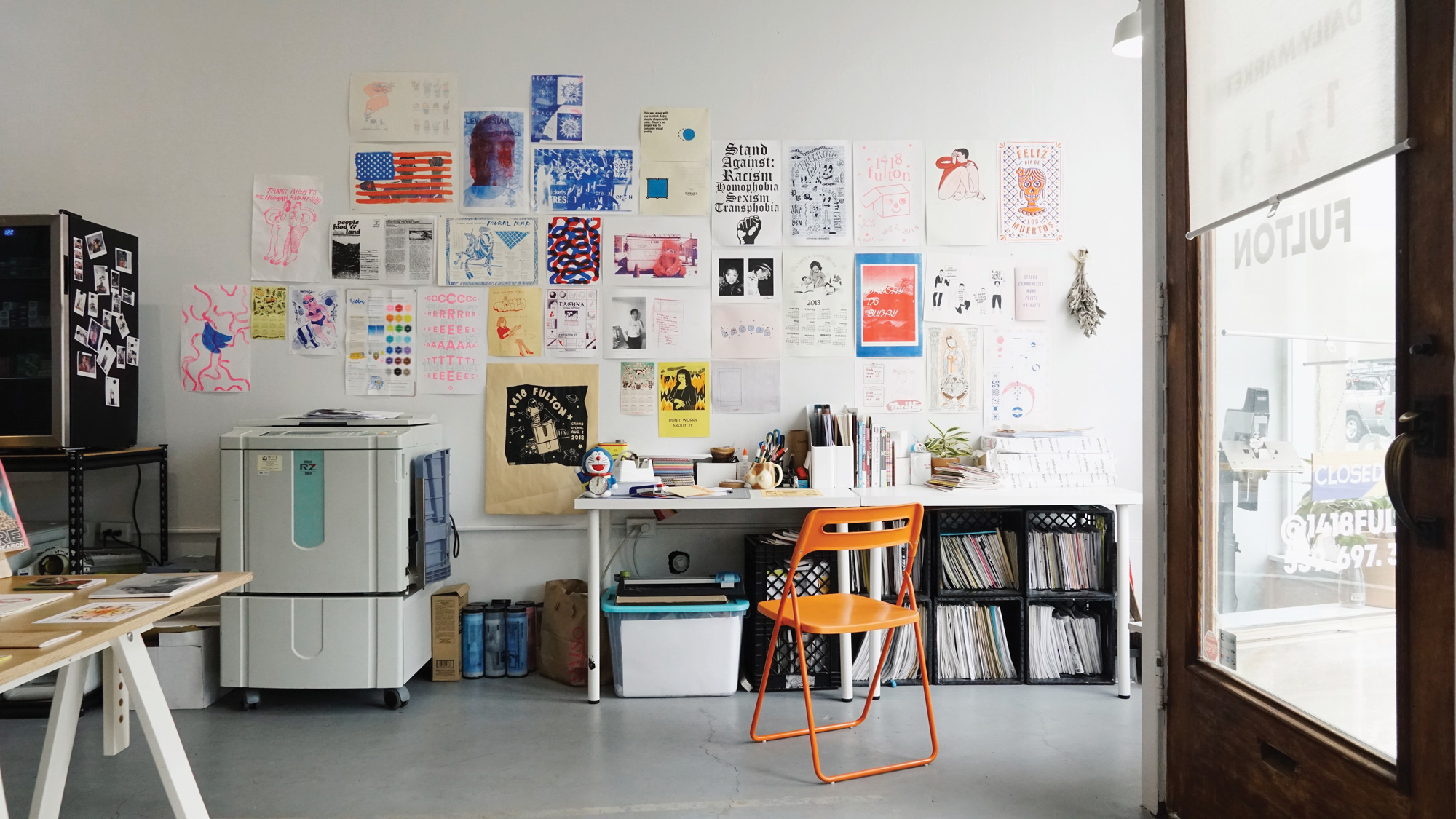 What has 1418 Fulton done for the community since its doors opened? What does it mean to you?

My partner, Vicente and I decided to make a graffiti zine called “Laguna”—we wanted to make a zine for the heck of it. It ended up being a shitty, shitty one, but it was fun. From then on, people would continuously come up to us asking how to make zines, which lead to us asking ourselves, “Why don’t we just help people make zines?” We wanted to start something that would help people learn the craft and this gave way to Laguna Collective. We did some research and bought our risograph printer, in which we ran out of a small shed.1418 Fulton is an extension of Laguna Collective, but it’s the retail space, it’s the storefront for Laguna. Opening this storefront has allowed us to showcase different artists to take over the space every month to share their own visions with the community. This has allowed recognition throughout the overall community and has pushed other people to make their own things. People come into the store and say, “Oh, I wish I could do this,” well, why wish when you could just do it? I encourage creativity. A dream is a thought. What separates a thought from action is your execution, and that’s how I see it. I want others to see that too.

Being in a vacuous place like Fresno or any small town makes it easy for you to fall into the cracks of loneliness. This is suburbia, and social media makes it tough because people who are already feeling stuck, are probably comparing their successes to those they see online or are afraid to express themselves in fear of being judged by people in this small town. We don’t feel the need to exploit people or cater to a certain demographic for money. A lot of groups and organizations of different backgrounds have been coming to us lately, and it feels really good because this means that our main objective of reaching out to communities is true to its point. It’s a good feeling. I wanted to create a safe space. 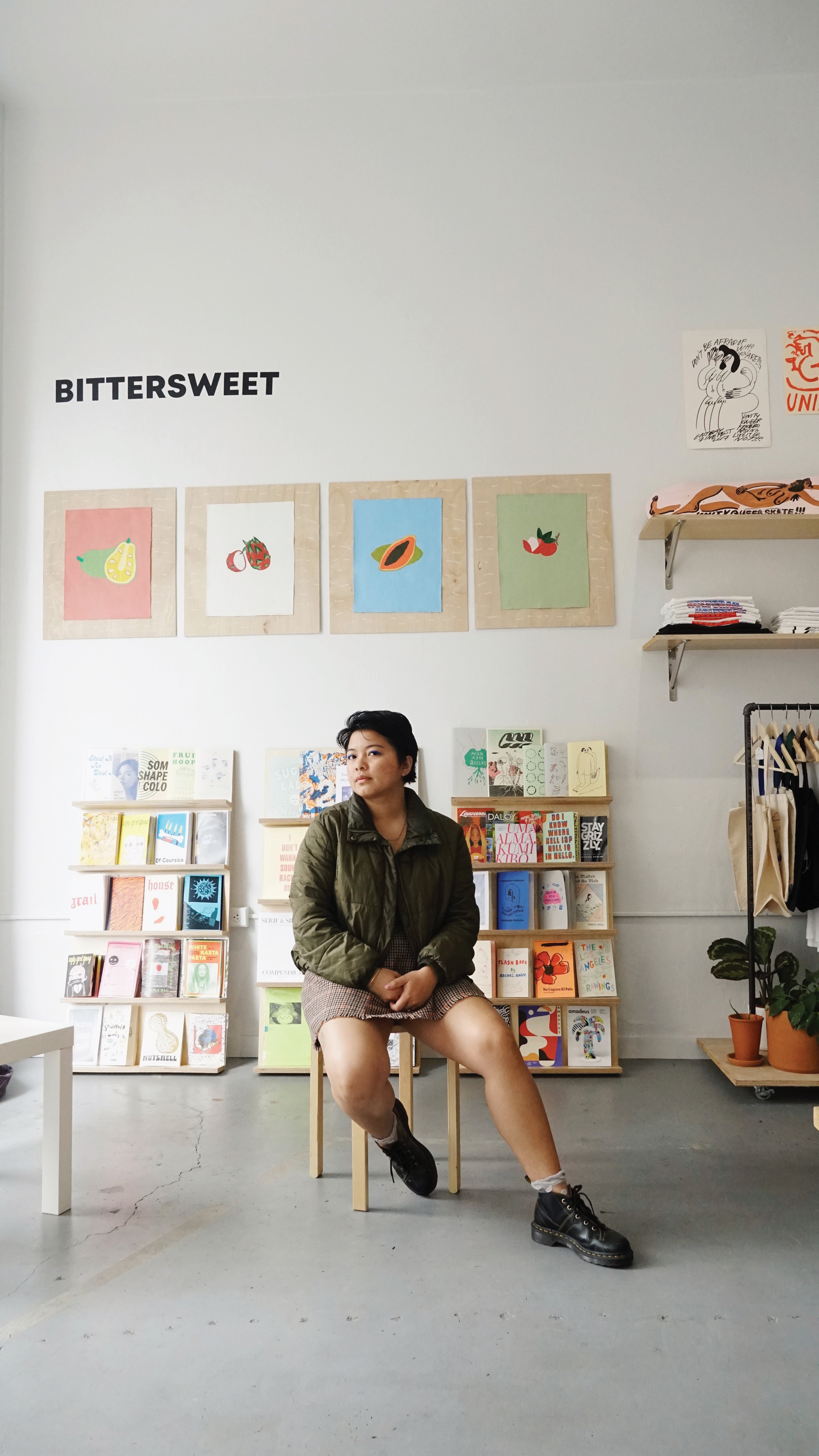 Elaborate more on what you’d consider a “safe space”.

A safe space grows not from fear, but from love and we’re always fighting for a safer community, meaning no violence, discrimination or judgment. We try to be very conscious of what we put out there for all to see and experience, and that is our main goal. We’ve curated many printing workshops for local organizations within schools and communities where we stimulate art direction through a certain topic and where these kids are open to speaking freely without judgment. We like to bring in topics on injustice, social issues, politics, prejudice, diversity, and culture and it’s so rewarding getting to do what I love to do.

Can you tell me more about diversity and culture here in Fresno?

Diversity and culture in Fresno are so prominent. I don’t know where to start. I see the diversity and culture here defined in the food and spices you see around town. There are Oaxacan restaurants, Lao restaurants, Punjabi restaurants, Ethiopian restaurants, and that’s not all of it. There are so many pockets of small communities within the city. I see Fresno as an immigrant town; it’s very brown and there’s a large Latinx community and a large East Asian and Southeast Asian community. There are many people here who are first-generation migrants raising their families here. It’s such a cool thing to see these communities push their culture and tradition to bring their people together. I found that I don’t have to go far, all of these cultural experiences are right here in our backyard