Artist Llew Mejia, “I’m More of a Hobbyist Than A Career Man”

I think the last time I talked with Llew Mejia was in 2014. I had just released the first issue of this magazine and was in the midst of a marathon of artist interviews and studio visits, as I tirelessly attempted to populate the mag’s brand new website. At the time, Llew was living in Minneapolis, had recently graduated from Minneapolis College of Art and Design, and was diving head first into a plethora of product and pattern design projects for a range of big brands.

While some things have changed over the last four years—Llew now finds himself based in New York after a quick stint in California, and he no longer subjugates himself to the clutches of the corporate 9-to-5–a lot has actually stayed the same. Llew continues to inject life into everyday objects with his brightly-colored floral, fauna, and folk-inspired prints and patterns, and he still fastidiously collects artifacts from places like Mexico, Central America, and Brazil to inform his current aesthetics.

Llew and I reconnected a couple of weeks ago, where he told me about his new tattoo practice, being more of a hobbyist than a career man, and the two Cornish Rexes and Sphynx that cohabitate his studio.

We haven’t talked since I started the mag in 2014. What’s changed and what has stayed the same in your life?

Ehhhh not too much has changed; I’m older and wiser now haha! No, not really, but I have moved from the midwest to California and then to New York City. I have been freelancing since then and not working in a corporate environment anymore which is really fulfilling, but equally stressful now that I’m my own business and all… 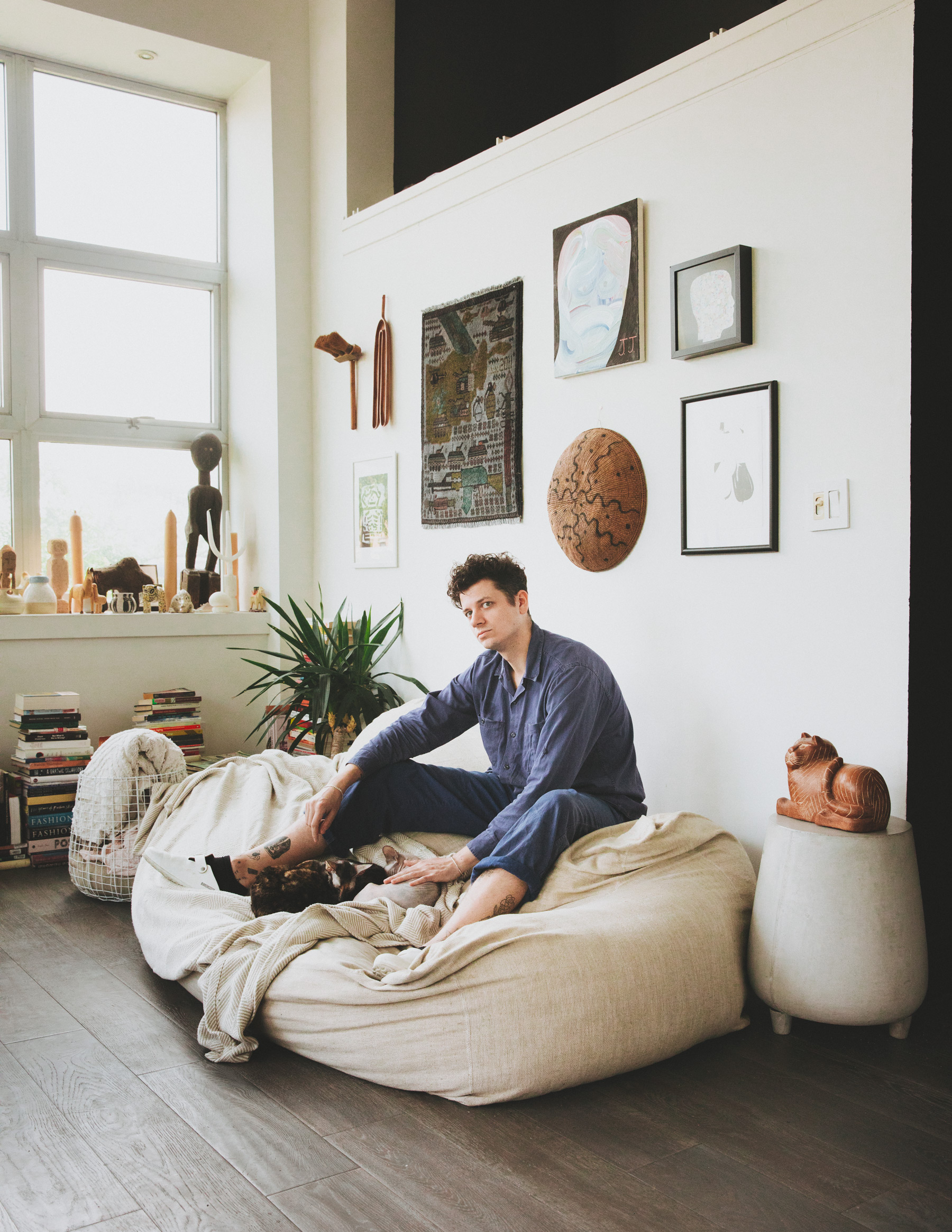 I recently saw you modeling in the Bonobos catalog, lol what was that like?

Hmmmm… I don’t mind doing work like that if it makes sense, they do a lot of bold print and pattern that kind of vibes with the work I do so I understand why I was chosen to model for a feature they were doing on visual artists in NYC. Also, I like that work because it’s so different from what I do usually!

What do you like about applying your artwork to a product?

I love seeing my work being appreciated by someone enough to buy something. If we were all wearing solid colors all the time, like I do, the world would be a little more boring probably, so I am glad that people are identifying with the things I am creating on a level where they feel the need to purchase something based on the aesthetic alone.

How would you describe your own style? Not your work, but you personally?

Haha, that’s a tough question. I would say simple, casual, comfortable. My girlfriend always teases me that I look like I live in LA and just walked out of a California flea market; I will take it as a compliment. I mostly wear all black or all blue and since I work from home in a studio I never really need to ‘dress up’ as they say. The older I get the more comfortable I want to be. Someday full Larry David status maybe. 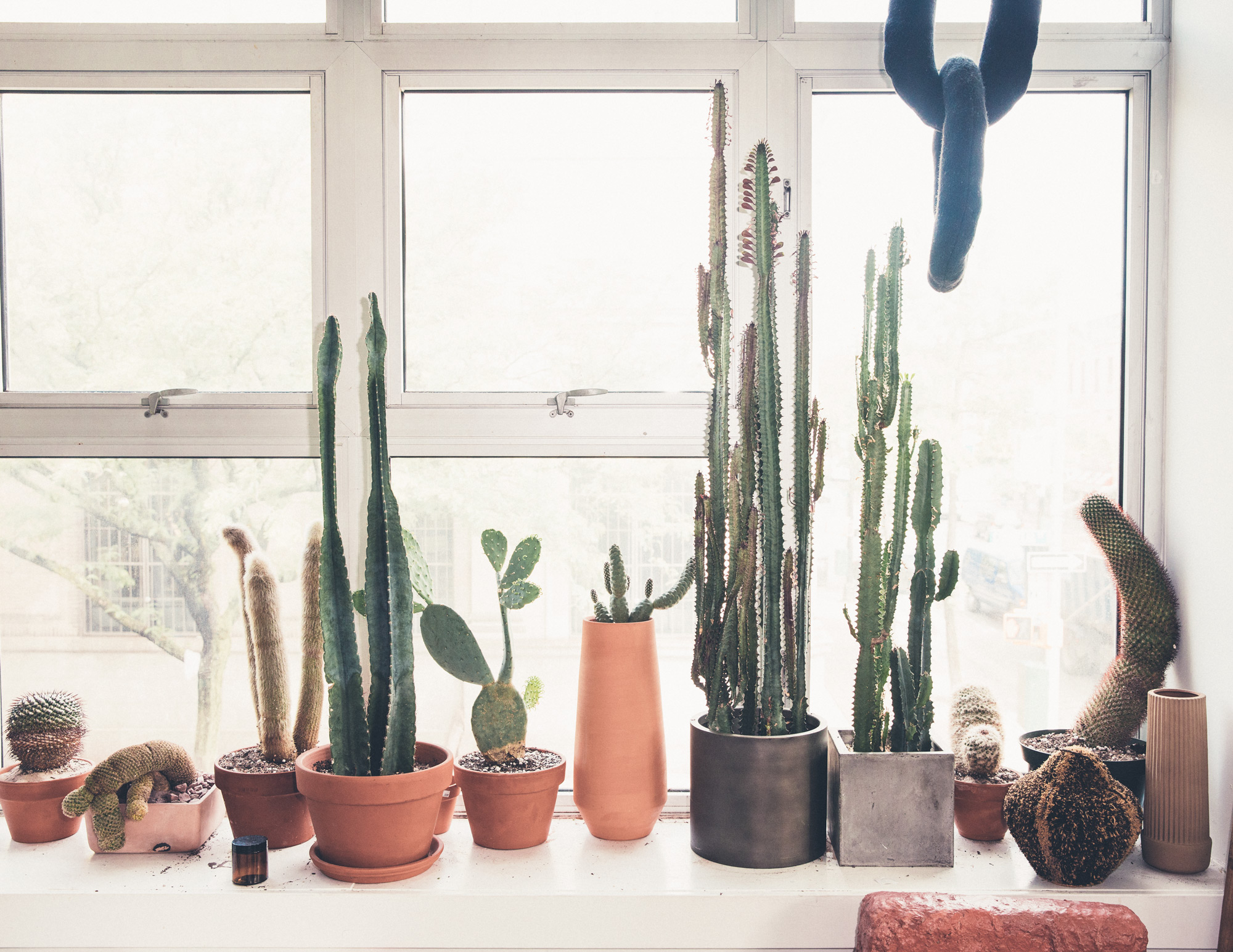 How do travel and cultural exploration drive your work?

I think a lot of the aesthetics I am interested in are folkloric in nature, so as a result, exploring other people’s interpretations of the world around them fuels my own. Other cultures have very specific ways of interpreting the most mundane things in our lives and interestingly enough stick to their visual libraries for generations. For example, a Mexican artisan could continue to produce something similar visually that his family has also made in the 60s but does so now contemporaneously, that’s an interesting thought to me. Handed down aesthetic vocabulary.

How does your Latinx heritage inform your work? Is it just as integral to the imagery and motifs as it was when we last spoke?

I think so, I tend to explore many different cultures. A lot of tribal cultures from places like the Philippines, Papua New Guinea, Mexico, Central America, Brazil, Africa and a bunch more. I like to collect artifacts from those places and Mexico and like to think that all those things play a role in influencing my current aesthetics. 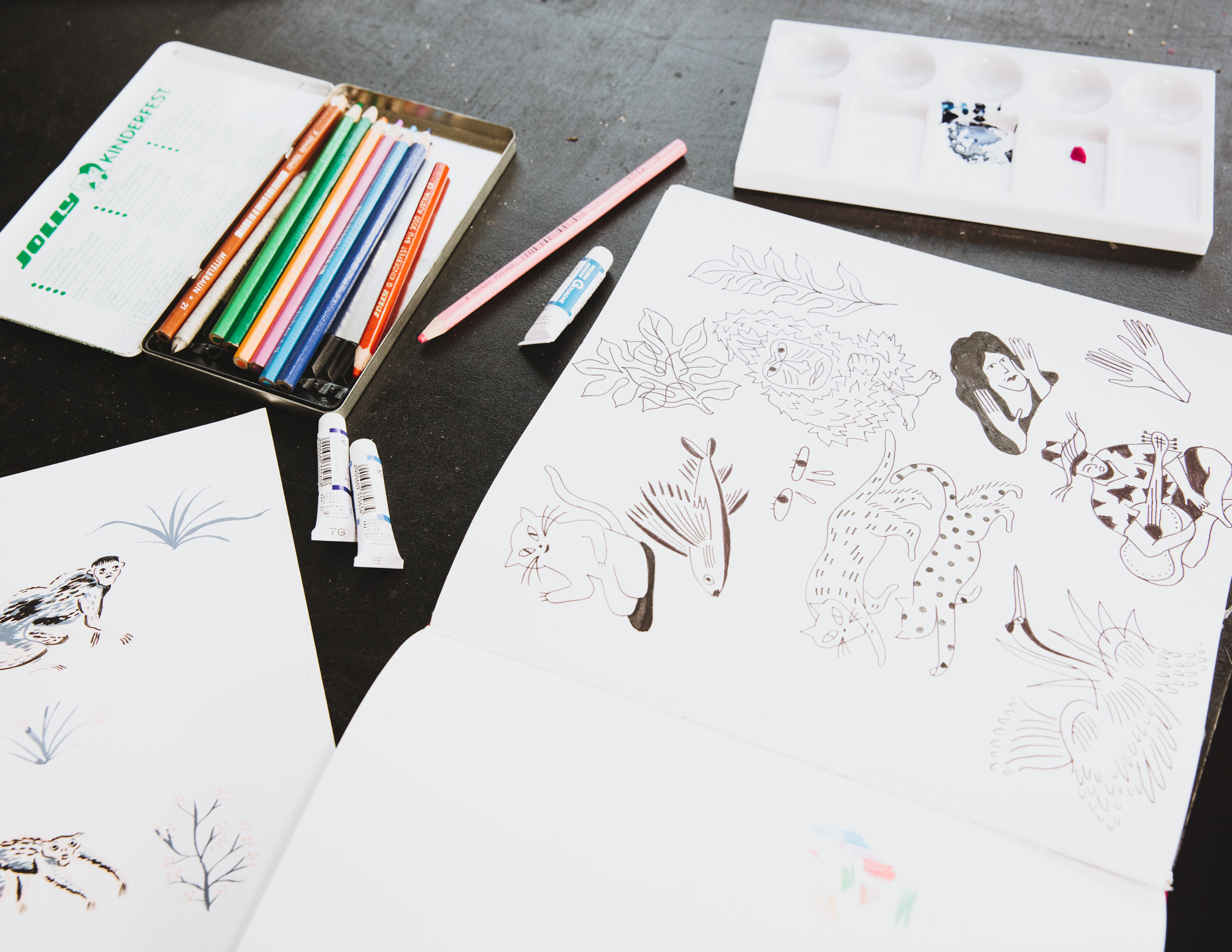 Tell me about your tattoo work. When and how did you start getting into tattooing?

I got into a long time ago but only started taking it a little more seriously as of late. I bought a machine again last year sometime. Prior to that, I had a machine that a friend had bought on Amazon for like $30 and I gave up because it was so horrible. Then I picked it back up again and it’s just been progressing ever since. I think I’m more of a hobbyist than a career man, I tend to pick up hobbies all the time. Whatever peaks my interest at the time I get really into and then drop a year or two later; story of my life and how I do it. I don’t know if it differs too much, it’s definitely still folky and illustrative. It’s also black and white which is a major difference since my other work has so much color.

I love meeting new people and hearing about their lives; from band managers, to set builders, other artists, doctors, and lawyers. You’d be surprised the array of the people is all over the place. I really am voyeuristic when it comes to how other people build their lives and what their worldviews are. My dad is a social worker so I think the aspect of looking into how someone’s brain is working and maybe, dare I say, talking through their thoughts, is interesting to me.

How do you see your career progressing? What would you like to get into that you haven’t already explored?

I would like to continue expanding my work with brands while maybe starting something of my own. I haven’t figured out that something quite yet, but I think I will know when the time is right. I would love to work in interiors in some way, helping on an artistic and curatorial level seems interesting. I also bought a rug machine, but it went to the wayside since its fairly complicated and time-consuming, but I would like to maybe take some classes in weaving or perhaps sculpture in stone. 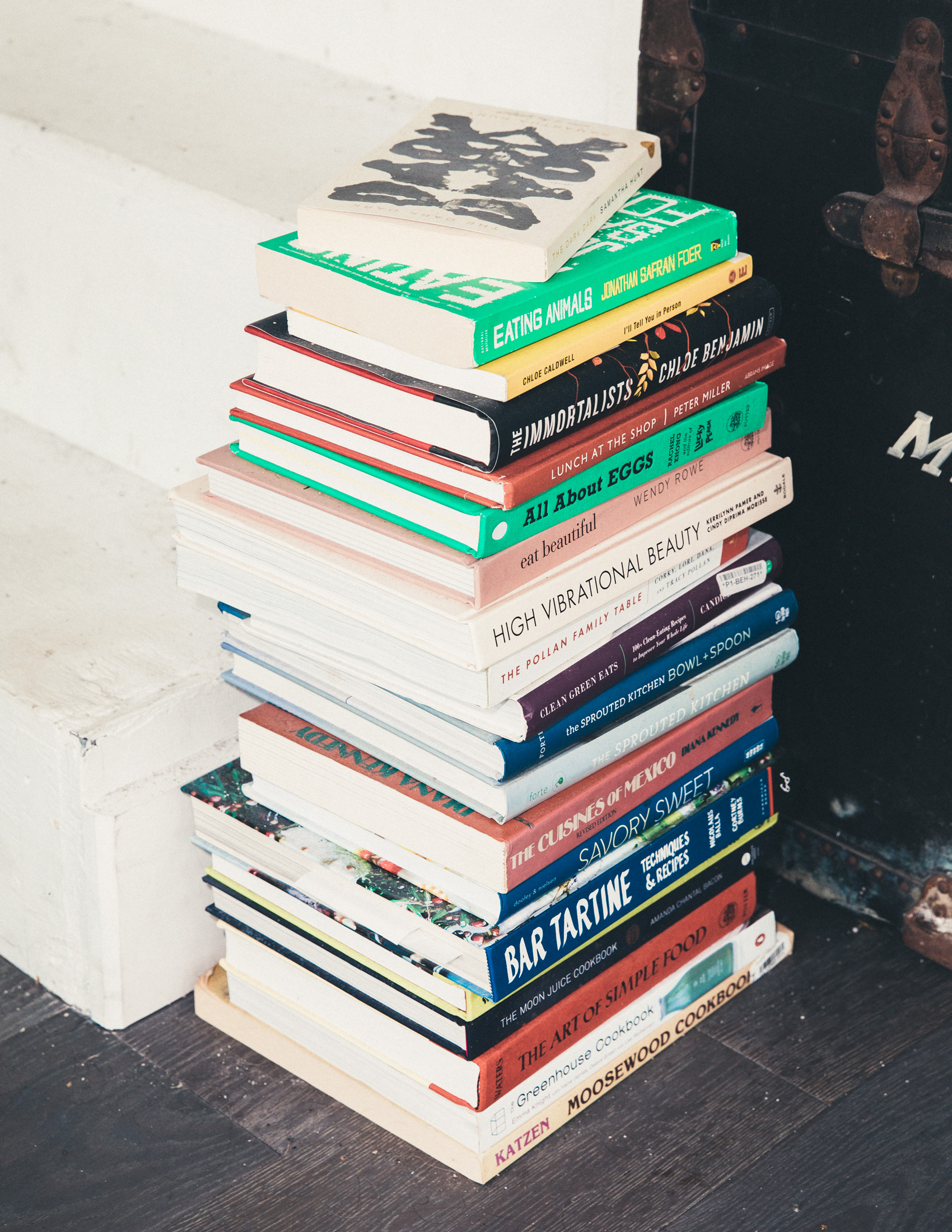 How do you like living and working in New York? What are some of your favorite things about the city?

I like it enough haha. It has its upsides and downsides like anywhere. I think it truly is one of the greatest cities in the world and rightly so. But it is intense and fickle as well as demanding in many ways so it isn’t for everyone. It’s hard to think of anything long-term since I have had such a hard time thinking about staying anywhere for too long. I would say there’s a lot of creatives here which I really like, and a lot of great clients I’ve gotten to meet in person.

Looking forward to anything?

Honestly, I’m looking forward to my next vacation or trip of any sort. Part of me wants to live in the woods for a couple of months and come back to NYC just for a reboot.

When you woke up this morning what was the first thing you thought?

LOL, where’s my coffee, where are my cats? 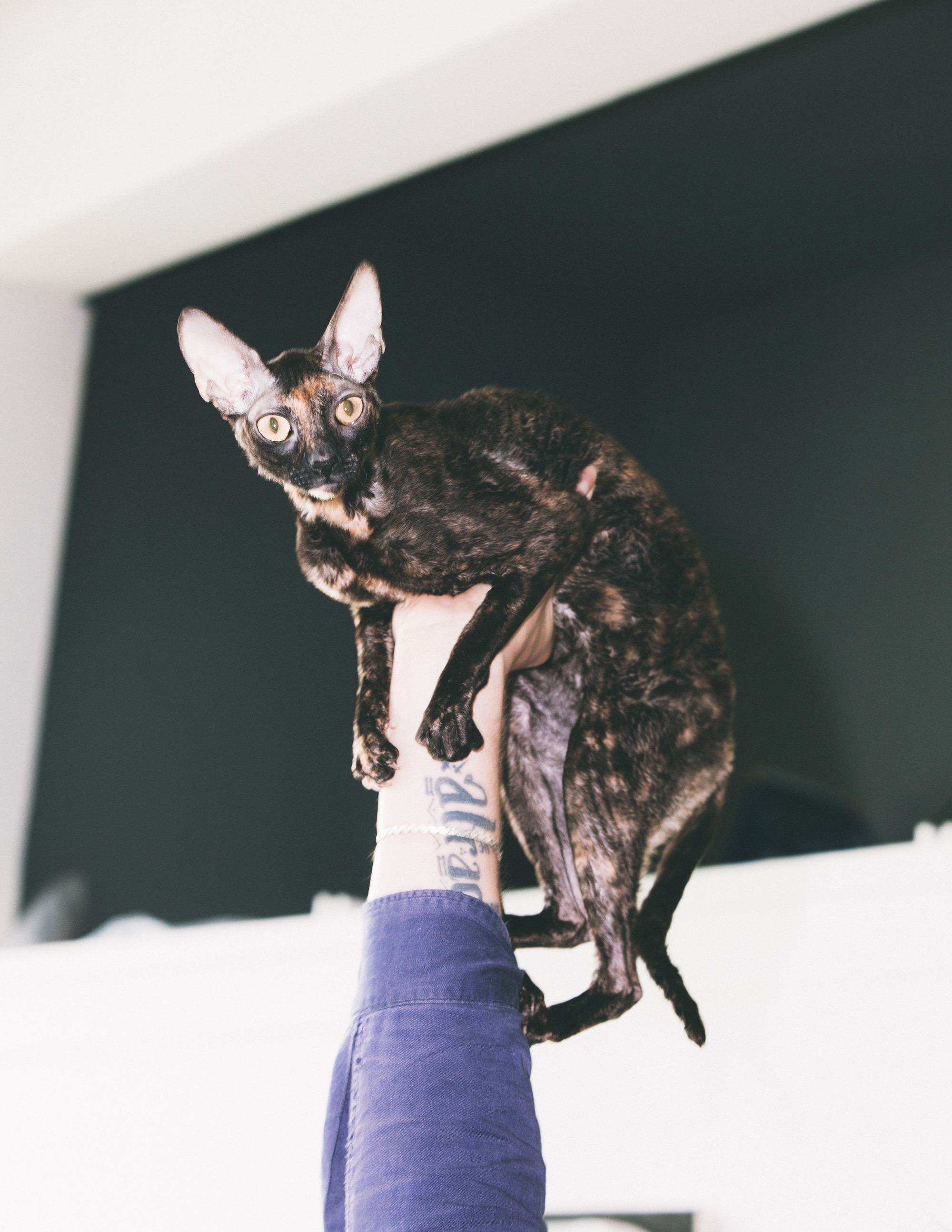 Tell me about your cats. From the photos that Adam took while at your studio, it seems like they are as much a part of that space as you are.
I have two Cornish Rexes and one Sphynx the truly hairless cat. Yeah I mean, I sound like a crazy person, but they are honestly my children. That’s facts. I look at them and I’m like damn look at my family. They each have their own personalities and are all kind of messed up health wise so that gets annoying, but that’s what you get for buying purebred cats so it’s my own fault. But also I would say that I don’t think of them as cats because they are more like gremlins or monkeys, they really understand the way I think and move into the apartment and react accordingly. You can see the gears turning as they plot the next thing they’re going to destroy if they aren’t getting enough love. Anyway, say what you want, I’m a crazy cat hoarder and I’m never having kids unless I go through some major brain rewire. 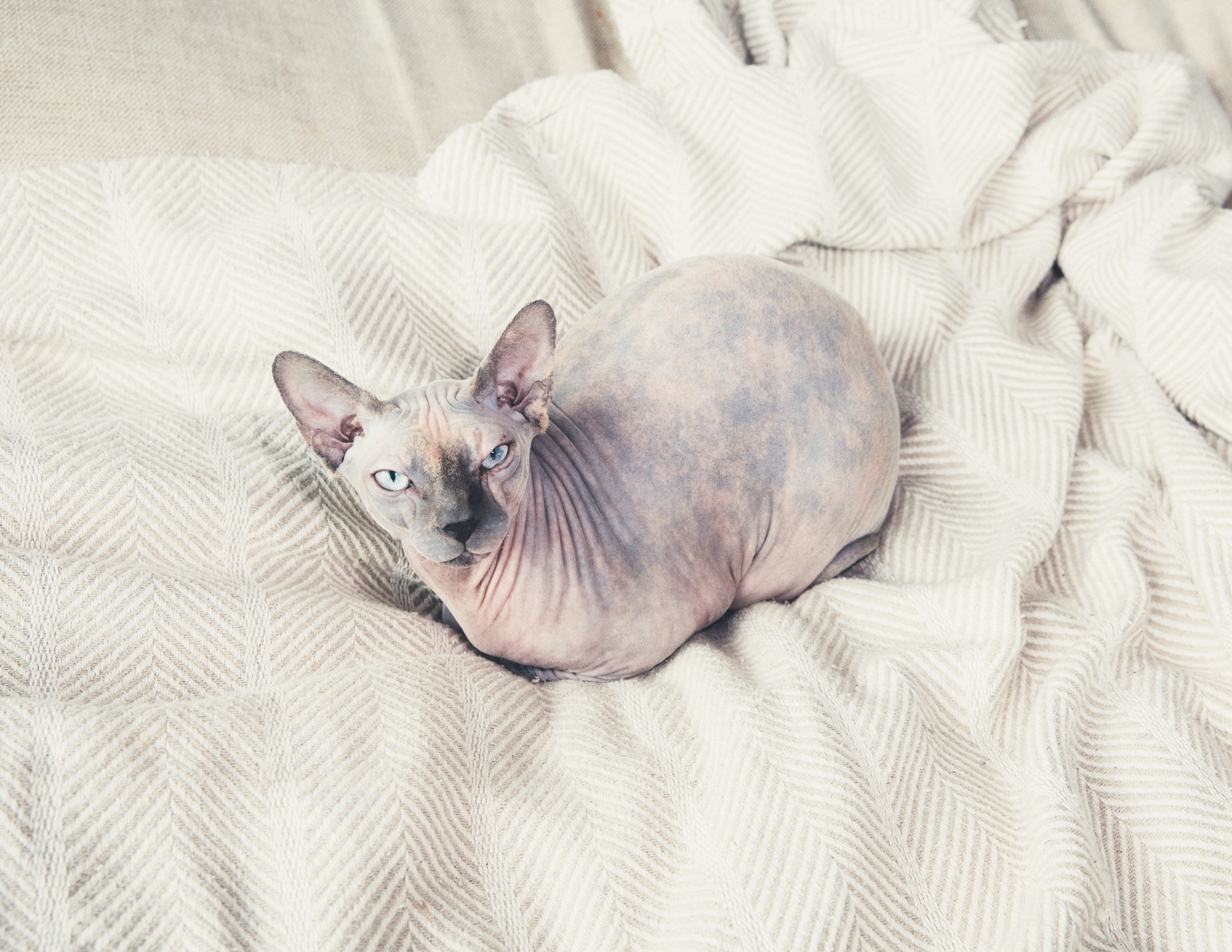 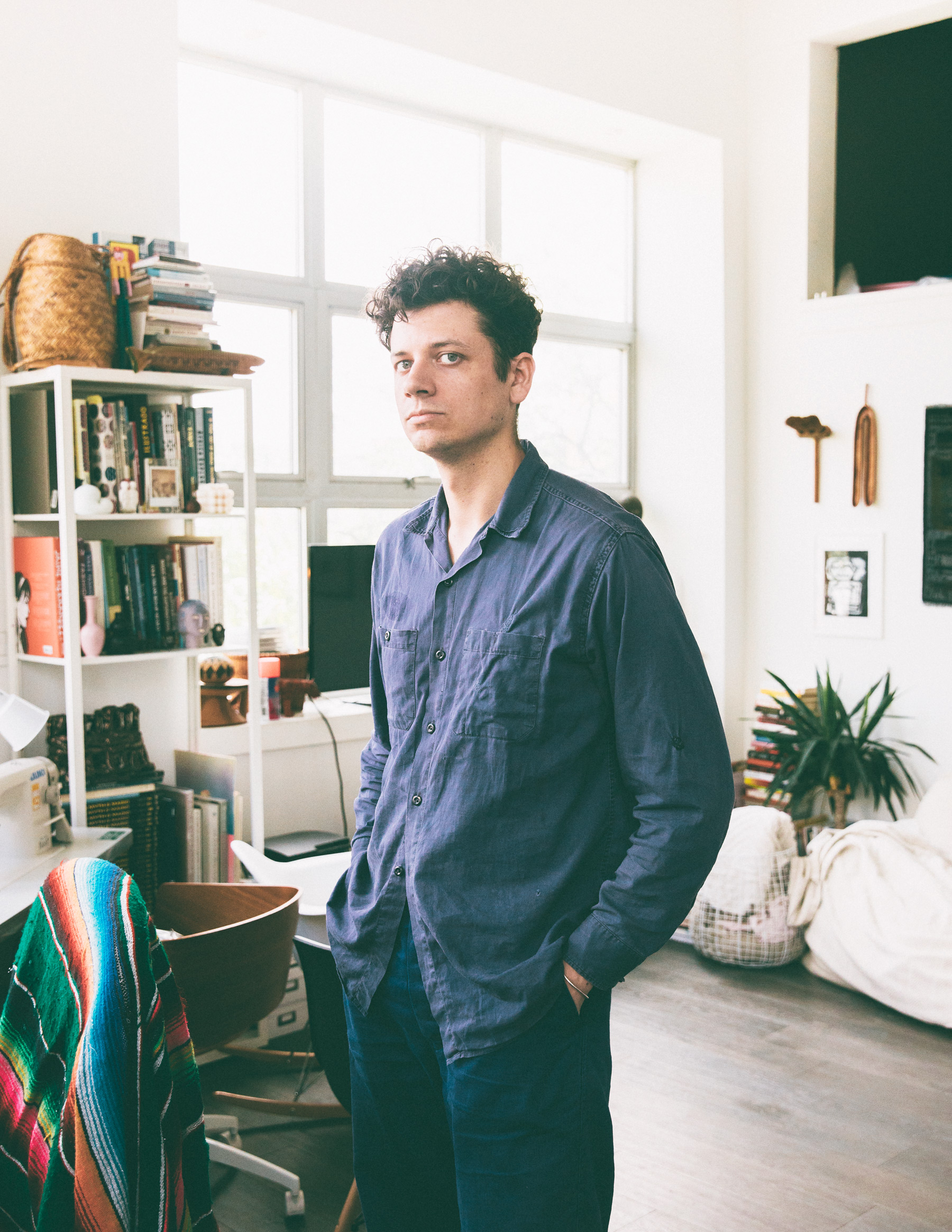