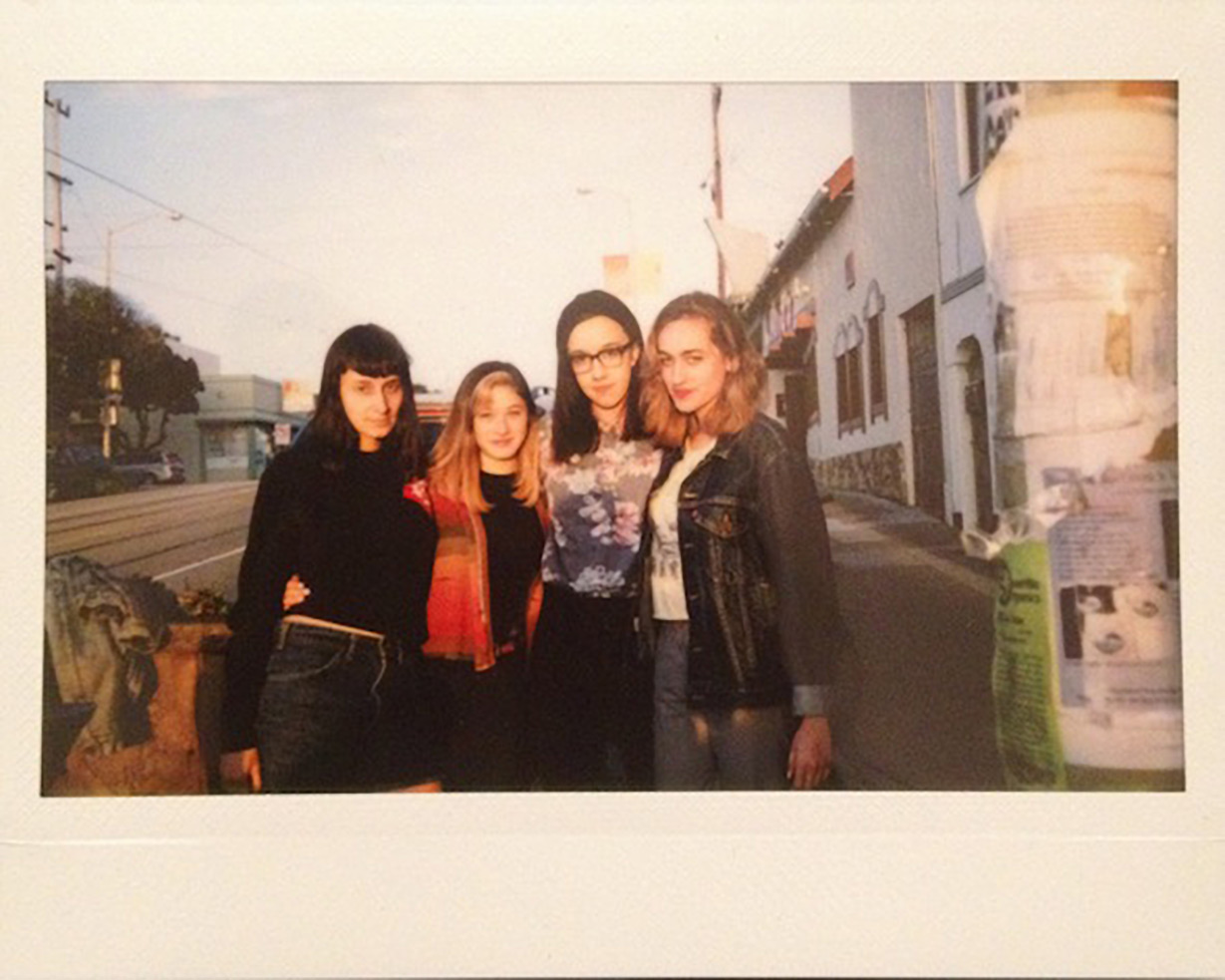 The She’s: Paving Their Own Path

Every band has a story of how they first met, and it is almost always an unexpected one. No matter how it happens, bands always seem to form out of some sort of inevitable fate, destining them for musical greatness. For The She’s bandmates, their stars aligned a lot earlier than most, bringing these four musicians together at the age of five.

“We always like to joke that we met in the sandbox, which is not that far off since we have been friends since we were five years old,” says Hannah Valente, band vocalist and guitarist. “In seventh grade we formed The She’s, the four members you see today is the same line-up from seventh grade. Sami, Sinclair, Eva and I were best friends, who liked music more than just about anything, and thus, The She’s were born.”

While most middle school girls were stuck pining over their latest crushes, Hannah, Sami, Sinclair and Eva navigated through their angst-ridden puberty years with their adolescent hearts set on something much bigger: forming a band.

Hailing from San Fransisco, band guitarist Eva Treadway, bassist Sami Perez, drummer Sinclair Riley and vocalist and guitarist Hannah Valente all attended the same school from kindergarten to eighth grade. What started as an excuse to let loose and eat pizza after school soon turned into a radical and badass female-driven rock band that would go on to open for their musical icons at some of the country’s most historic venues.

Since the band’s start 10 years ago, The She’s have forged their own path, creating a magical musical meld of 60s surf rock-revival with contemporary garage rock. They released their first full-length record, Then It Starts To Feel Like Summer, in November 2011, which received outstanding reviews, and hasn’t stopped climbing the music ladder since.

We had a chance to catch up with the golden voice behind The She’s, Hannah Valente, to hear more about the band’s early years, musical influences and how they “brushed off the haters” to pave their own way through an industry that tried to tear them down.

I’m sure you all have heard it before, but you have a truly unique sound. It really is a beautiful blend of radical surf and 60s pop-revival with a dash of contemporary garage-rock music. Did you set out to achieve this specific sound from the start or was it a sound that sort of developed over time?

Thank you for those kind words! We did not always know how we wanted to sound. In middle school we were really into The Donnas, so our songs were a little more punk, a little more angry, although we had to try really hard to find things to be angry about. We mostly made up songs about the girls who got all the guys, or how mean our parents were, which was a complete lie; they are the sweetest and most supporting parents in the world. Our sound began to become more surfy around the beginning of high school, when we really started listening to the Beach Boys and The Ronettes. Along the way our own music tastes developed too. We have always been influenced by other bay area bands—by the bands of our friends and by the contemporary indie music scene as a whole. I don’t think we ever really had a plan for what to sound like. We just tried to write songs that sounded like the music we liked, songs that we would want to listen too.

Tell me a little bit about your creative process. Is there one main writer or does everyone contribute to the writing process?

Our writing process is very collaborative. Someone will come to practice with a part of a song and we will finish it all together. It usually takes us months to like a final composition. Our songs are like patchwork blankets or something like that, in a way. It will have choruses Sami wrote, verses Eva wrote, amazing drum fills that sometimes make the entire song by Sinclair, and I’ll write an ending. Something along those lines.

If you had to sum up your music in your own words, how would you personally describe it?

I honestly have such a hard time with this. So I would probably tell someone to listen to a song of ours and decide for themselves. I feel like that sounds kind of rude, but I would rather someone walk away with their unique understanding of our music, without being influenced by what I think of it.

What would you say most heavily influences your music and sound? Any particular musical heroes?

I know each of us would answer this differently, so I will say what my personal influences are at the moment. Angel Olsen and Mitski are my two heroes right now. The way they sing, the emotion in their words, everything about their music moves me. Some of the other artists I have been listening to lately: Rihanna, Beach House (always), Kehlani, The Internet, Blouse, Amy Winehouse, Anderson Paak, The Canberries, Frank Ocean, Sheer Mag, Solange, and many more. My musical taste is kind of all over the place, I know. And of course, have to shout out all the friends’ bands that influence me and inspire me every day: Plush, Pardoner, Fire Arm, World Smasher, Blossom (RIP), Share, Lasher, Miserable, SOAR, Sirena Victima, Crazy Train, Dr. Officer, and fine. 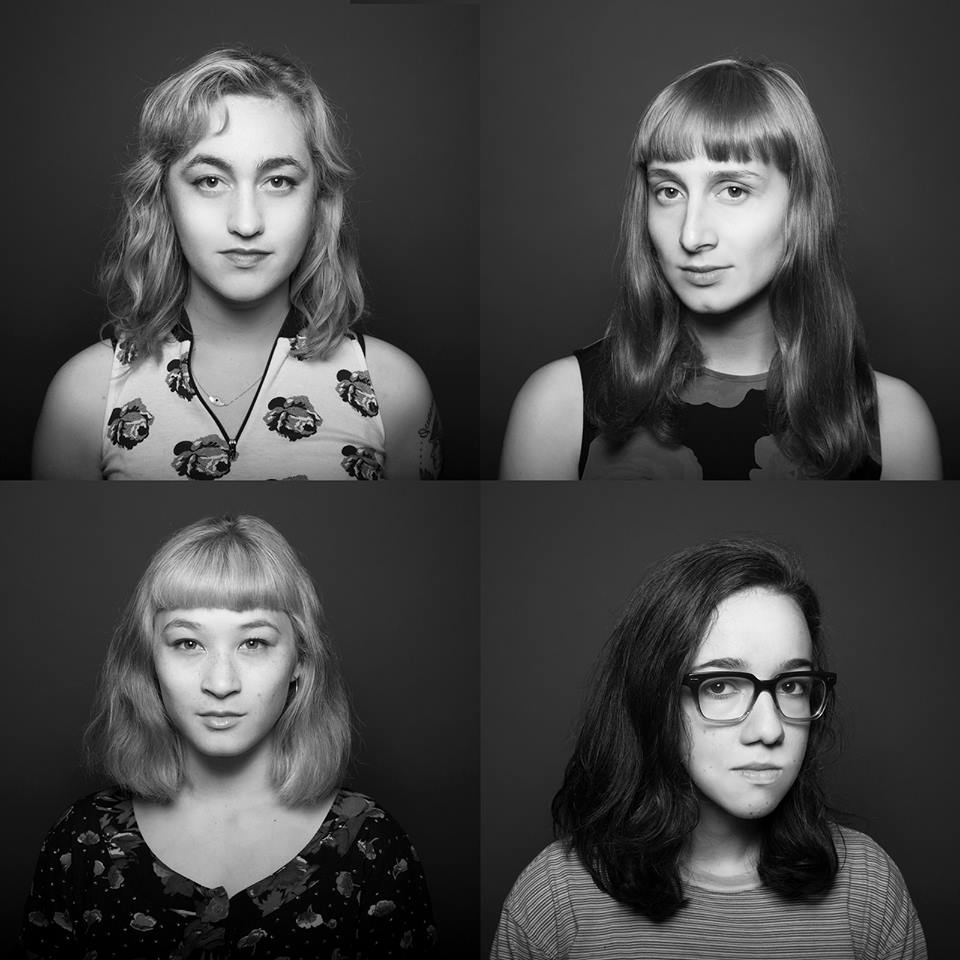 Being in such an important time in history right now, with all of the recent political uproar, it is as important as ever that we inspire and encourage everyone, especially women, to stand up for what they want and to sing it from the rooftops. What do you all feel most proud of or most special about being in this awesome and fierce all-female group?

I am most proud of the space we have created for ourselves. This is our tenth year as a band, and it has been a struggle to be taken seriously, especially when we were younger. Through many, many professional soundmen telling us we didn’t know what we were doing, we learned how to hold our ground, how to brush off the haters, and how to sing our songs even louder. But, we also had so many musicians in the Bay Area we looked up to telling us to keep going, asking us to open for them, and supporting us in any way they could.

What do you hope fans gain from your music?

I think one of the best things about music is the limited control we have over what our fans take away. I know my favorite part of listening to music is feeling some kind of connection to the words, taking away some kind of feeling that I am not alone, that someone else knows how I feel. Or just loving how a song makes me feel, deep in my bones, beyond the words. I just hope people have that connection to our songs, that we can help people feel less alone or just a little bit happier.

What has been your most memorable show to date?

We have been lucky to play so many memorable shows. Opening for GIRLS at the Fillmore is on the top of my list though. That was the first time a band we adored, idolized, asked us to play a bill with them.

What’s next on the horizon for The She’s? Any upcoming shows, projects, etc.?

We are going to release a new full-length album this year! We’ve been working on it for a long time now, trying to make it extra special. I’m really excited for everyone to hear it.

Lastly, if you could go back in time and give your young-selves one vital piece of advice about starting a band, what would it be?

Don’t let anyone else define who you are! 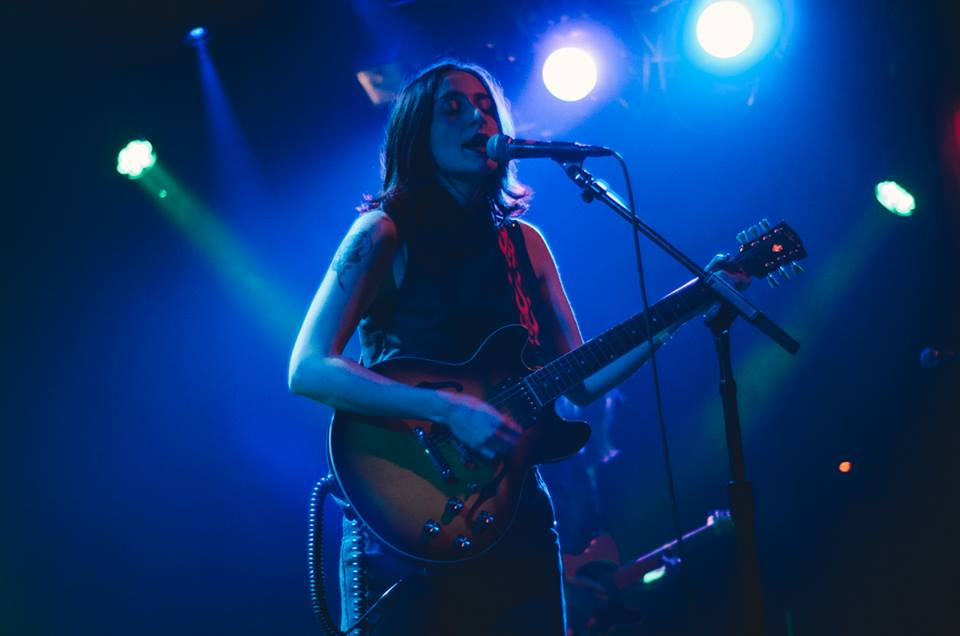 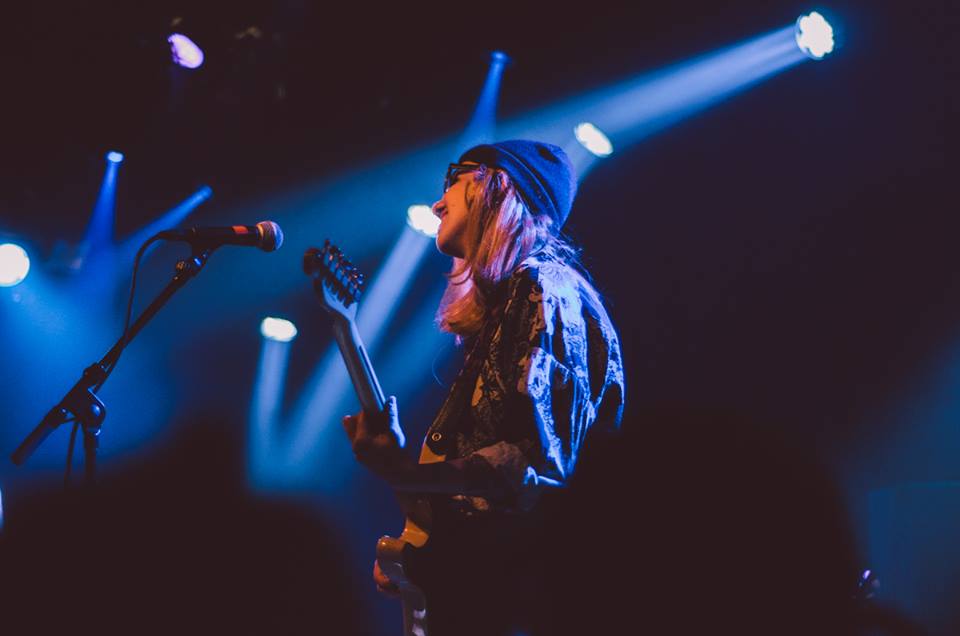 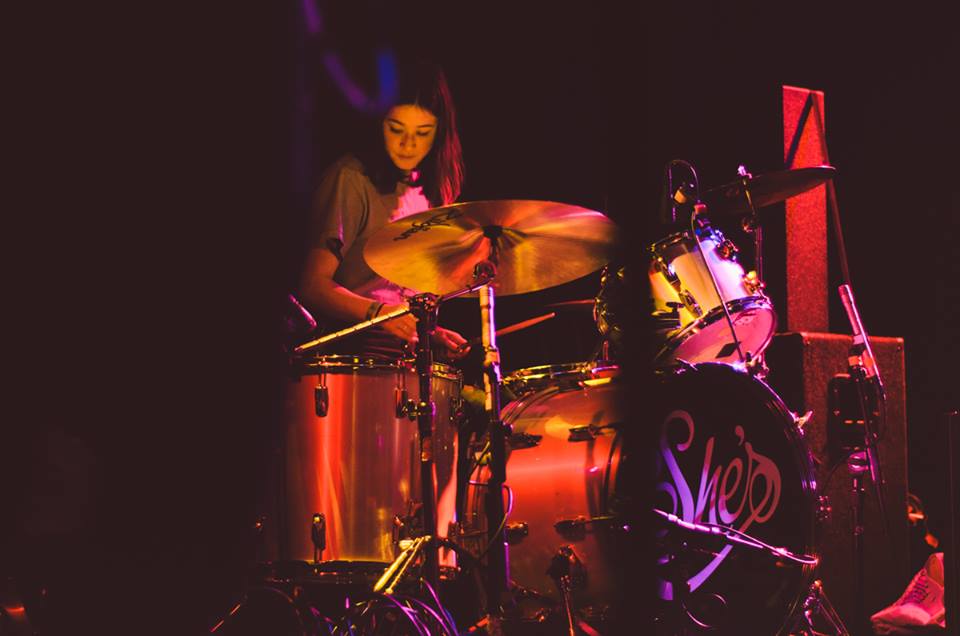 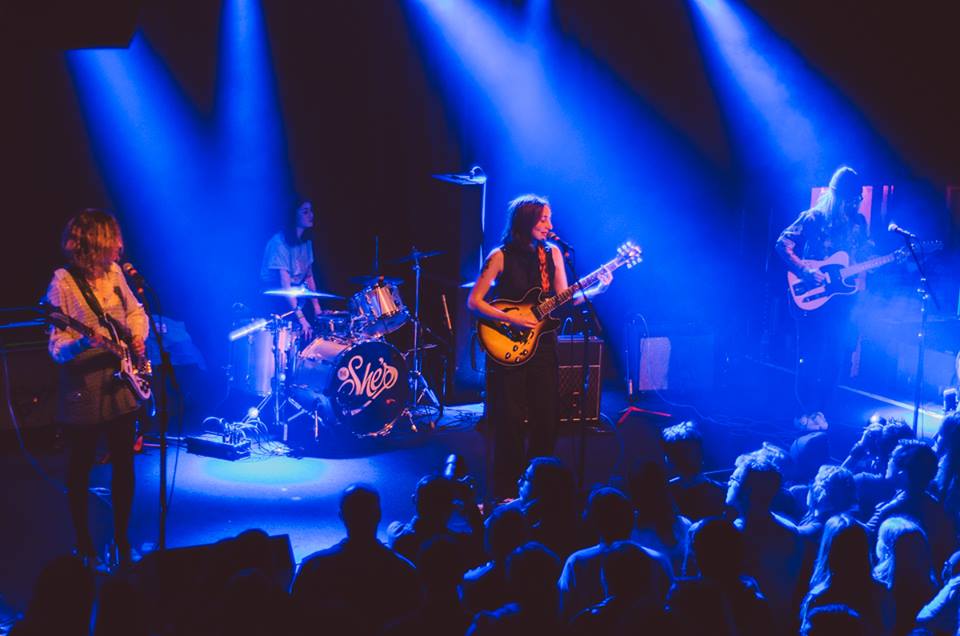