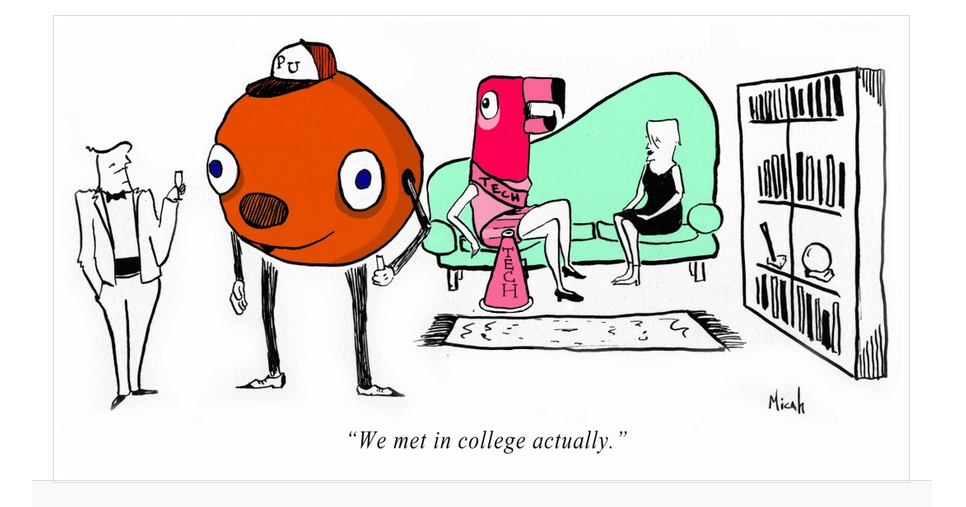 Micah Stahl is a people-watcher. No one is exempt from inspiring his next doodle. Whether it’s an old couple haggling over where to eat, fellow students in Stahl’s horticulture night-class, the big-nosed man walking down the street, or the whiney hipsters sitting at the table next to him, Stahl attentively plucks out people, places, and conversations he encounters throughout his day and spins them into clever comics and storyboards.

Wry, funny, and shot through with nostalgia, Stahl’s illustrations and comics have a playful quality all their own. He has a formula which encapsulates his ironic commentary on the internet, people, politics, and daily habits.

As not only an illustrator and storyboard artist, but a writer as well, Micah Stahl balances the classic teeter-totter between the words and the art with no problem. Give away the entire story in the text, and the art becomes superfluous. Tell the entire story in the art, and it makes the text redundant. However, Stahl has a poetic play between the words and his comedic illustrations. They feed off each other; each one necessary to the other. We chatted with Stahl about how he makes his work and the beauty of serendipitous inspirations.

First, give us the condensed Micah Stahl spiel. Who are you? Where are you from? What’s you’re favorite snack food?

I grew up in a shore town in Connecticut called Madison; it’s a beach town about a 20-minute drive from New Haven (Madison has great beaches if you’re a beach gal or guy). Connecticut is actually more diverse and interesting than people think; it’s not all Greenwich and Starbucks and people who work in New York City but used to live there and don’t live there anymore. A lot of it is very rural and beautiful.

I’m a writer and an illustrator by trade. These days, I make mostly cartoons and write scripts for comics and movies. Saul Steinberg, the great cartoonist, described himself as an essayist that doesn’t write. That’s the way I think when I work, even when I’m writing.

Man, now you’re getting to the hard hitting questions about snacks! Getting all Connie Chung on me. Jeese. I’m not sure if some of your readers are like this, but I’m the type of guy that goes through big snack phases. For a month, I’ll intently seek out Blue Raspberry Slurpees from 711. Next: Sour Skittles. Next: Manchego cheese. Recently I’ve been really into these Japanese seaweed crackers called Nori Maki Arare. There are a few mainstays that I always come back to though: barbecue sunflower seeds, Swedish Fish (the red kind, not the multicolored kind), MEGA STUFFED OREOSSSSSS.

It seems like a lot of your comics recall childhood experiences, would you say that is a reoccurring theme in your comics? What other themes do you personally see in your work?

It’s funny you pick up on that because I don’t ever think about continuing themes in my stuff. It makes my work sound so mature. Poop and sleep are also running themes in my work I guess, but I’ll leave those topics for my second interview.

My immediate family is super close. I have two great brothers, one great sister and two great parents that I talk to very often (my mother is reading this and saying to herself “You really don’t call home that often”). I grew up a fair distance away from all of my extended family, and my parents pushed us to be even closer with each other because of that, I think. It makes sense that you see that in my work.

If anything, I try to focus on keeping my work existential and as perennially relevant as I can. For cartoons especially, I’ll always steer clear of extremely topical jokes as those cartoons have a much shorter shelf life. Especially in our digital age when you readers can look up everything that any artist has ever made, I want to make sure that work I did 5 years ago, 10 years ago, 25 years ago still has some impact today.

What’s your story-boarding process like? Is there a brainstorm before the sketching? Do you have a single sentence that then drives the illustration?

I’ve always been a proponent of serendipitous inspiration in the sense that the best ideas happen when I’m walking from Lechmere Station to Courthouse Seafood (Cambridge, Massachusetts shout out!). My best ideas just happen when I’m forced to do nothing but think for some extended period of time. Concepts are much more organic that way and seem to stay fresher, longer.

Once I sit down, then it’s a focused frenzy of getting shit done. All is fair in art and war.

Your sketches are fabulous. What attracts your attention most when your doodling? People? Emotions? What’s something you subconsciously always doodle?

Character is what attracts me the most when doodling something. Trying to capture that uniqueness in a drawing is probably the most fun thing about sketching for me. Sometimes I see someone walking down the street wearing some crazy funky Davey Crockett hat or sporting a beautifully bulbous schnoz and I just want to pull a Leonardo Dicaprio and grab their arm and say, “I have to draw you” in as suave of a voice as I can.

I’ll almost always be sketching something I’m physically looking at since the best kind of practice is drawing something right in front of your face. My girlfriend and I are enrolled in a night horticulture class together. It’s a really funny gathering of people, and I think I’ve doodled at least half of the class at this point. Drawing is such a great way to better observational skills regardless of whether or not you want to be an artist.

You’ve worked on some collaborations lately, like “The Big Night” book. What do you love about the collaboration process the most? Do you find that you, yourself evolve when working others on projects, seeing how they work and picking up on things?

The Big Night was a really fun collaboration for me. I got to work with my good friend Bram Algoed who is a nasty artist. We’re both very comfortable criticizing each other’s work too which makes for great results. There’s so many amazing aspects about the collaborative process. The best part is working with another person that pushes me even further in my abilities, as I feel a responsibility to not only myself but also my partner to produce the best possible end result.

A functioning collaboration takes effort and responsibility from everyone involved. I’ve had significantly more failed collaborations than successes due to the ebbing of enthusiasm. But when the finished work is seen through to completion, I’ve always gotten a great deal out of the collaborative process.

What are some projects you’ve worked on that have helped you expand your artistic skill set? Do you have the urge to illustrate outside of the comics/graphic novel style?

It was a tricky project. I have a lot more experience writing than I do illustrating, and I’ve always had a large interest in combining the two forms in a way that includes more text. Doing the layout for such a story is so different from comics since the illustrations are more corroborating the story rather than telling it. But I think the biggest challenge was writing something actually funny. Writing comedy is no joke (!). It’s by far the most difficult genre to succeed in writing.

There’s a great article by Sam Sacks from The New Yorker last year arguing on behalf of the illustrated book as a medium. Many of my favorite illustrators flourished there (E.H. Shepard, Quentin Blake, Kurt Vonnegut, etc.), and I think the medium has a high potentiality to be both personal and impactful.

Give us a verbal tour of your workspace. Music playing? Smoking cigarettes? Food?

Oh man. I’m not sure if I should do that. My workspace is a big mess.

Okay, here’s the thing: I believe very strongly in the power of entropy. “Things fall apart; the center cannot hold” as Yeats so eloquently puts it a.k.a. “Shit gets crazy”. There’s something about mess and disorder that actually really gets me going when I’m working. So my workspace is covered in sketches and papers and rulers and paint. There’s various mugs with ancient black tea bags stuck to the side. I love to listen to music if I’m drawing. If I’m writing, it needs to be silent. I will sometimes eat BBQ sunflower seeds while I work.

Have your illustrations always lent themselves well to comic book art or was there a point in your life when you made a conscious decision to work in the comic medium?

As a writer, I had a lot of collaborations that went awry, and I began to get frustrated. Writers are universe inventors, life breathers, character creators… but they can only do so much. Comics really attracted me initially too because its one of a handful of popular mediums that one individual can very realistically complete the entire project all by him or herself. The comics audience is also very malleable– they’re willing to give almost anything a shot. A N Y T H I N G.

Do you have any dream projects you’re dying to be able to do?

FUDGE YA! I have too many ideas to ever realistically accomplish. However, there are a few projects that I absolutely have to do at some point in my career.

1. I have to have to have to write a screenplay for an action movie and do my best to get it filmed. I’m obsessed with action movies, especially 90’s action movies (Terminator 2, The Fifth Element, Demolition Man). They have such a raw level of audience appeal– flashing muscles, crazy explosions, gratuitous sex, and so on. I already have a few ideas in mind for a story. The business side of navigating Hollywood seems really difficult, though. If any producer is interested in producing a movie about a chimpanzee who fights crime for some reason, don’t be afraid to email me!

2. I also would very much like to make a continuously running comic strip most likely online. I’m working one right now that I think could be special. But it’s taking a back burners to some other projects right now.

For more from Micah Stahl check out it website here: theoutdoorwaitingroom.com 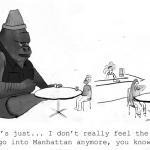 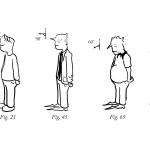 “The Angles of Age” 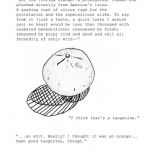 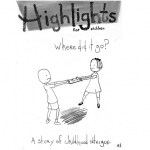 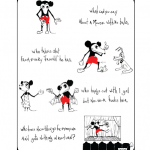 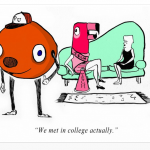 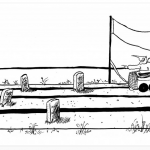