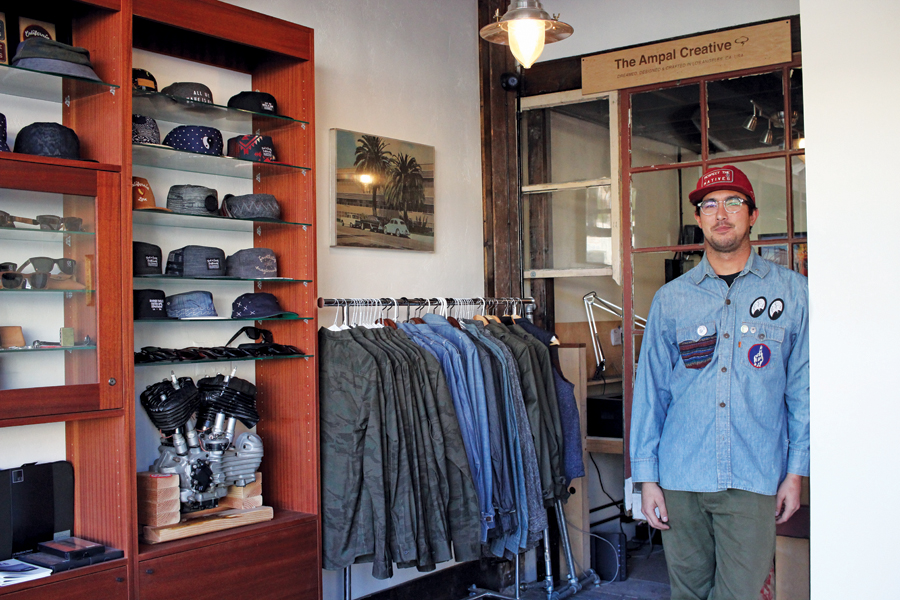 A creative headwear company with a working philosophy of balancing craftsmanship and wearability.

Mass production has long meant mass-indifference, as we’re generally left to fit generic, modular objects into the fine contours of our lives. But The Ampal Creative runs the opposite direction; a headstrong, do-it-your-own-way type of company that blazes a better path where few existed before.

Founded by Andrew Potash, the lively headwear company began with what he explains as “the search for the perfect hat with the right fabric, fit and details.” But despite the abundance of (mostly indifferent, mass-produced) hats on the market, nothing quite seemed to hit the mark. So, Potash set out to make his own.

The Ampal Creative began in 2010 when Potash began searching for the very best fabrics anywhere; materials that he could see himself wearing.

“At first I wanted the company to be a little more premium,” explains Potash.  “I even had designed this really crazy hatbox inspired by a jewelry display box that opened horizontally with ribbon and a magnetic closure.“ However, since those initial months, Potash has realigned the company’s focus by putting the utmost emphasis on wearability. “Premium and making the best hat really have nothing to do with being fancy. I want to make a quality hat; I think fancy is a way of disguising underlying bad design. That’s not us; we always have the wearability in mind.”

With his eyes set on construction, focusing meticulously on even the smallest of details, Potash finds his cache of fabric gems – he has somewhere between 200-250 rolls of unused and limited-style fabric laying around – from old school fabric suppliers about Los Angeles, and also picking up any small or large amount of fabric he finds.

“I’m always writing down ideas for fabrics, whether it’s material or patch work,” says Potash. “I’ll come up with an idea a long time before I actually use it. Sometimes I’m looking out for something specific, but if something else catches my eye I’ll get it knowing I can incorporate it later.”

The Ampal Creative prides itself on their production processes – everything designed and made in the USA – and all the little things that go into each hat. Obviously inspired by the classic beach styles that saturated Southern California in the early sixties, Potash has fostered a headwear company that reflects that same spirit and who’s collections are full of solid, handsome, durable pieces that are true everyday staples.

“The clean aesthetic from the late 50s, early 60s has stuck with me in my designs for the brand,” explains Potash. “Of course, having grown up in La Jolla, California, surfing, especially the surf styles from that period of time have really played into our aesthetic as well. That post WWII period of surfing yielded some outside-the-box thinking and noticeably classic and timeless design elements that continue to permeate Ampal’s identity.”

Potash stays true to the nature of the materials he uses, letting their qualities guide the aesthetic decisions he makes with future designs – aka form follows function, reducing all ornament to a minimalistic essential few elements, less is more. With that, Ampal Creative’s classic, restrained lines make their hats remarkably immune to the caprices of seasonality. And with signature detailing, unique one-off fabrics, and such niceties as the stitching, they should be the stalwarts of any modern man or woman’s wardrobe.