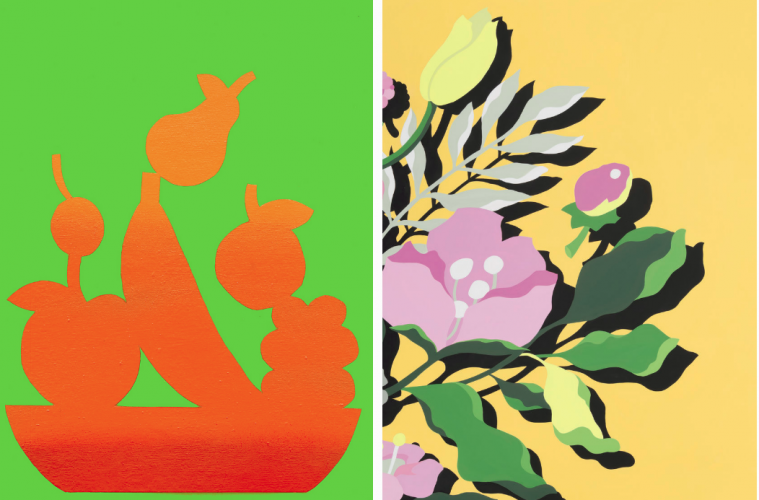 The Space Between: An Exhibition with Ryan Bubnis and Ayumi Takahashi

Portland based artists’, Ryan Bubnis and Ayumi Takahashi, art can most simply be described as mindfully, thoughtful. With an extreme conscientiousness to color, subject, storytelling and use of materials, the two devoted artists produce work that creates a story for their audience, urging them to use their imagination.

The two artists collaborated on their newest exhibition, The Space Between, opening at Portland’s Stephanie Chefs Projects, September 9, exploring the limits beyond the subject. The duo focuses less on storytelling and more on allowing their audience to decipher their own path through the use of colors and visuals surrounding the subject.

Ryan Bubnis, a multi-disciplinary artist, is equally influenced by DIY culture, art history, illustration and design, and he explores various themes of nostalgia and focuses on simplification and form. Ayumi Takahashi, an artist born in China, raised in Japan and educated in the U.S., explores the spectrum of color, watching how her audience reacts to various depictions of color and form.

The two artists defined what “the space between” means to them, creating an exhibition of thought, color, imagery and insightfulness of how subject and form can be represented. We had the chance to catch up with the artist’s where we discuss how they translate “the space between” to their audience, collaborating with one another and their artistic processes.

How did you and Ayumi decide to work together on your guys’ upcoming exhibition, The Space Between?

Ryan: I was a fan of Ayumi’s work after seeing it on Instagram. We were in a group show at Stephanie Chefas Projects last year and soon after that I invited her to speak to my illustration class. Steph introduced the idea of doing a 2-person show with Ayumi and it made perfect sense.

What is “The Space Between” to you?

Ryan: The Space Between references a journey, the space between two points, a start and a finish, layers, evolution and growth. I also like to think it’s about celebrating our differences.

Your illustrations always beg the viewer to look deeper, finding something new beneath the layers, colors and subjects each time it is viewed. Did you find yourself focusing less on a specific, focal point when putting pieces together for The Space Between?

Ryan: Thank you. I appreciate that. I always read and research my subject or concept before I execute a piece. That being said, I really enjoy the dialog between the painter, the materials used and the surface. I try to listen to what the piece is telling me it needs or doesn’t need in terms of color, composition, etc. Recently I’ve been trying my best to practice restraint.

You want the viewer to create his or her own imagery and story for your illustrations. Is it difficult to separate your own self from this idea? Do you always have a story for each illustration you create? Do you ever want to hear what stories your audience creates?

Ryan: I think that’s the great thing about the medium of painting. The artist constructs a narrative through coding and symbolism and the viewer might come in and see something entirely different. It’s definitely difficult to separate yourself, but I try to focus on subject matter that is universal in hopes that the imagery connects with the viewer. I usually have at least a loose idea of what the piece is about but I want to trust the process and let the painting go where it takes me. Hearing the reaction and stories the audience brings to the work is one of my favorite things.

What has your head space looked like as of recent? Do you find yourself in a different headspace than you did a year ago?

Ryan: I think so. I’m hopefully a bit calmer and less frantic about everything. I’m trying to work on enjoying the moment and not worry so much about the past or future. I’ve started doing yoga. I’m taking my first semester off from teaching in seven years to focus on personal projects and I’m excited to see where that takes me.

Any other projects in the works?

Ryan: I have a few upcoming exhibitions as well as collaborations with new and existing clients. I’ll share when I can. I just want to keep pushing myself and my work.

What inspired you to work together with Ryan Bubnis and put on this exhibition?

Ayumi: I have shown with Ryan before, and always been a big fan of his work. Pattern-making, simple shapes, sharp edges…and yet very different. We definitely make a harmonious, but complimentary duo together.

What does “The Space Between” mean to you? I’m sure that as you create new pieces of work you grow a connection towards each one. What is it like trying to pass on that same emotion to an audience that is viewing a piece for the first time?

You want the focus of your pieces to revolve more around the shapes, patterns, abstractions and colors more than the representation of the illustration. How is this process different from your past processes?

Ayumi: I felt that sometimes the shapes I am creating in my work have too much “design” and “planning”. I tried to be less considerate of those things this time, but to have a quicker response to the shapes I create. Instead of tracing the sketch perfectly onto the panels, I tried paper cutting and drawing with my left hand. This indirectness was also an approach to add some kind of space and distance between me and the work.

The opening reception for The Space Between will be held at Stephanie Chefas Projects on Friday, September 9th from 6-9pm. The exhibition will be on view through October 7th, 2016.