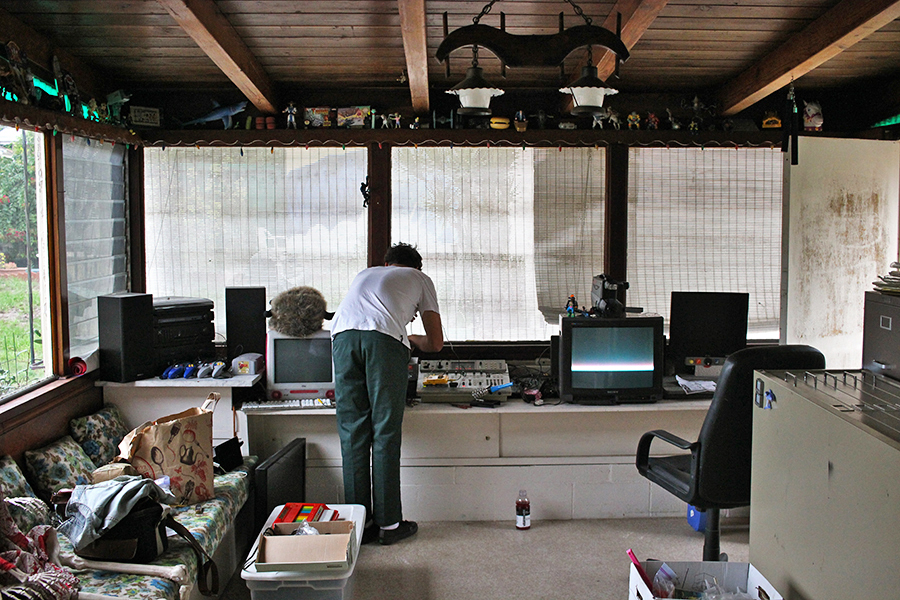 Sometimes Bryan Peterson will sit in the back room of his Los Angeles house for eight hours at a time. Streams of colorful, wavey, psychedelic glitches cascade an old boxy TV screen, while Peterson sits to the side of the monitor, usually tinkering and twisting nobs on a large mixer of some sort, and pushing the ‘A’ and ‘B’ buttons on a Gameboy color that he custom wired as a vessel to perpetuate his digital art. Sometimes his distorted imagery gets a little too distorted, but Peterson trudges on, experimenting with different digital inputs like a mad scientist. In some cases the process is more important than the finished result.

For Peterson, the artistic process is marked by a succession of inputs and outputs. The camera or video is inputted, travels through a series of mixers and custom processors and creates an output that then creates a new input, and so on. Through his glitched GIFs, VHS edits, and digital installations, Peterson seeks to subvert and problematize common technologies. Formed out of a growing movement of artists in Chicago who deliberately incorporate brokenness, Peterson’s work calls for an intentional hack of regular technology, reconstruction, and total complication of the aspects of computer culture. By embracing the cyber flaws, short circuits, and disjointed components, Peterson is interested in exploring the ways in which technological systems and equipment can be realigned, modified and played with critically.

The trend of experimentally revising and perverting technology is rooted in much of the early video and conceptual art of the 1970s, most notably in the work of Phil Morton. Peterson’s work centers around the noisy and colorful errors propagated when electronics are unexpectedly interrupted or misbehave. Glitches (the quite obvious reason it’s called glitch art) and breaking kind of makes the system aware of itself and uphold the mantra ‘nothing is perfect, nothing will be perfect.’

We spent some time with Bryan Peterson in his wire-infested studio space, where he walked us through his process, his influences, and where he’s planning on taking his craft. Bryan will also be collaborating with Amadeus in the coming weeks, as he contributes a weekly GIF to the magazine. Keep your eyes peeled.

Give us a little rundown on glitch art and new media. How did you get involved? What’s your working process?

I’m basically third in this lineage of new media artists. Phil Morton started the video portion of the new media program at School of the Art Institute of Chicago in 1970. Guys like Jon Cates, Jon Satrom and Nick Briz started out in Chicago, learning from Morton, and are the ones that kind of started glitch. They  took what they learned from the older dudes messing with video and conceptual art in the late 70s and reapplied their theories in a digital sense. They were my teachers, and watching them build off the theories of new media artsits in the 70s, I could understand the way people kind of put their own spin on things in the medium.

What I do is take a video, input a source, then a couple feedback loops. It’s the same thing over and over, mixing and remixing, but along the way adding a bunch of layers. I keep playing with what I mix and add to the original video until I find something that I think is cool. Basically what it’s doing is taking a video signal and running it through a bunch of different filters to where it can chop up the video to even the smallest, little point, which messes with it and alters it in some weird way. I like to think of it like painting a video. I try to paint with the video signal. Right now I’m shooting on a Hi8 video camera a lot. No one uses this type of camera anymore, so it’s like I’m giving it new life. Artistically, you can use cameras or other digital materials in an entirely different way, making it possible for the artistic output to be completely different than anything that’s been produced with the camera ever before.

What is one of your most recent projects that you enjoyed most?

I really had a lot of fun doing the piece for Insight. It gave me the chance to go out an shoot, I shot random people around Venice one day. I tried to look at the different beach, surf, and skate cultures around me – palm trees, beach people. I took this psychedelic approach. When I first did the project for Insight, it was for their Venice store. Then they were randomly like, “Oh dude would you be willing to go to Las Vegas and set it up for our booth!” I was obviously completely down, so I went out there and it was a great time. It got a lot of really great feedback.

Who or what are some of your strongest visual influences?

I want to say John Van Hamersveld – classic psychedelic infused surf artist. I try to emulate that in my pieces, but digitally. His random line work is really psychedelic and the color palette he uses really got me. I mean also, Van Gogh, always. Van Gogh’s pretty sick, his whole epileptic view of color. Anything like more abstract in a sense. Also the Korean artist Nam June Paik, he’s another video artist from the late 70s.

How do you continually fuel difference in your pieces? Where do you start in making something like a GIF?

I usually start with the same thing, then I’ll discover something new. It’s a lot of experimenting, and letting your instincts kind of guide you through. There’s also the times when I’ll get to a point and have made something really cool on the screen, but will have no ideas how I got there, and can’t remember how to recreate the piece. It makes this temporary if you don’t get a photo of it. Even if I do get a photo, it’s hard to figure out how I got to that finished result.

Right now I’m shooting on a Hi8 video camera a lot. No one uses this type of camera anymore, so it’s like I’m giving it new life.

You’ve created music and skate videos, GIFs, VHS projects, and installations in your glitch art style, and your work has been printed on t-shirts for Insight, is there a particular direction you’d like to work more in?

I want to do it all, I’m especially always looking for bands that vibe with the glitch style. I really try to play with it in a music video sense. I started out as a painter and then kind of fell into new media and glitch art. I create these projects that I call video paintings. I’ll have this video that I’ve created, on a loop; it’s a weird way for the viewer to look at art. These pieces kind of come back to the fact that I’m a painter in a sense; I’m always trying to cross boundaries between new media and painting; how they play off each other when they are combined. That’s what these video paintings do. They are about 80 minutes long/ It’s the same thing with GIFs and the looping they have. It’s all about fluidity. Not too fluid though.

What, where, who do you draw from for your GIFs?

I like to have them focus on things that I take for granted. My most successful ones are my palm tree GIFs. I grew up around Los Angeles, totally influenced by surf and skate culture. Then I moved to Chicago for four years, I got really home sick. It was cool though because I needed to take a step out and realize what I took for granted here, and one of those things was the abundance of palm trees. Just looking up in Chicago and not seeing palm trees was a total bummer. I try to incorporate the Southern California thing in all of my art. I draw a lot from old surf videos. 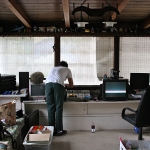 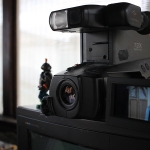 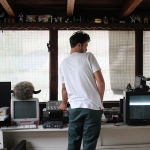 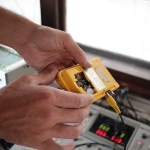 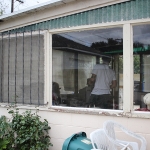 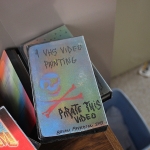 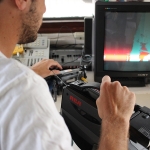 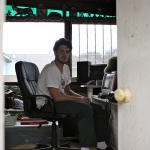 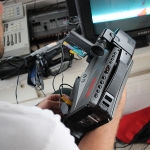 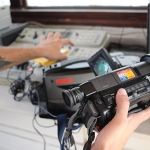 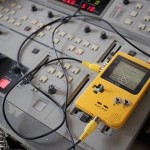 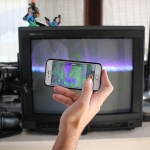 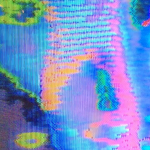 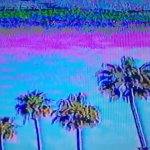