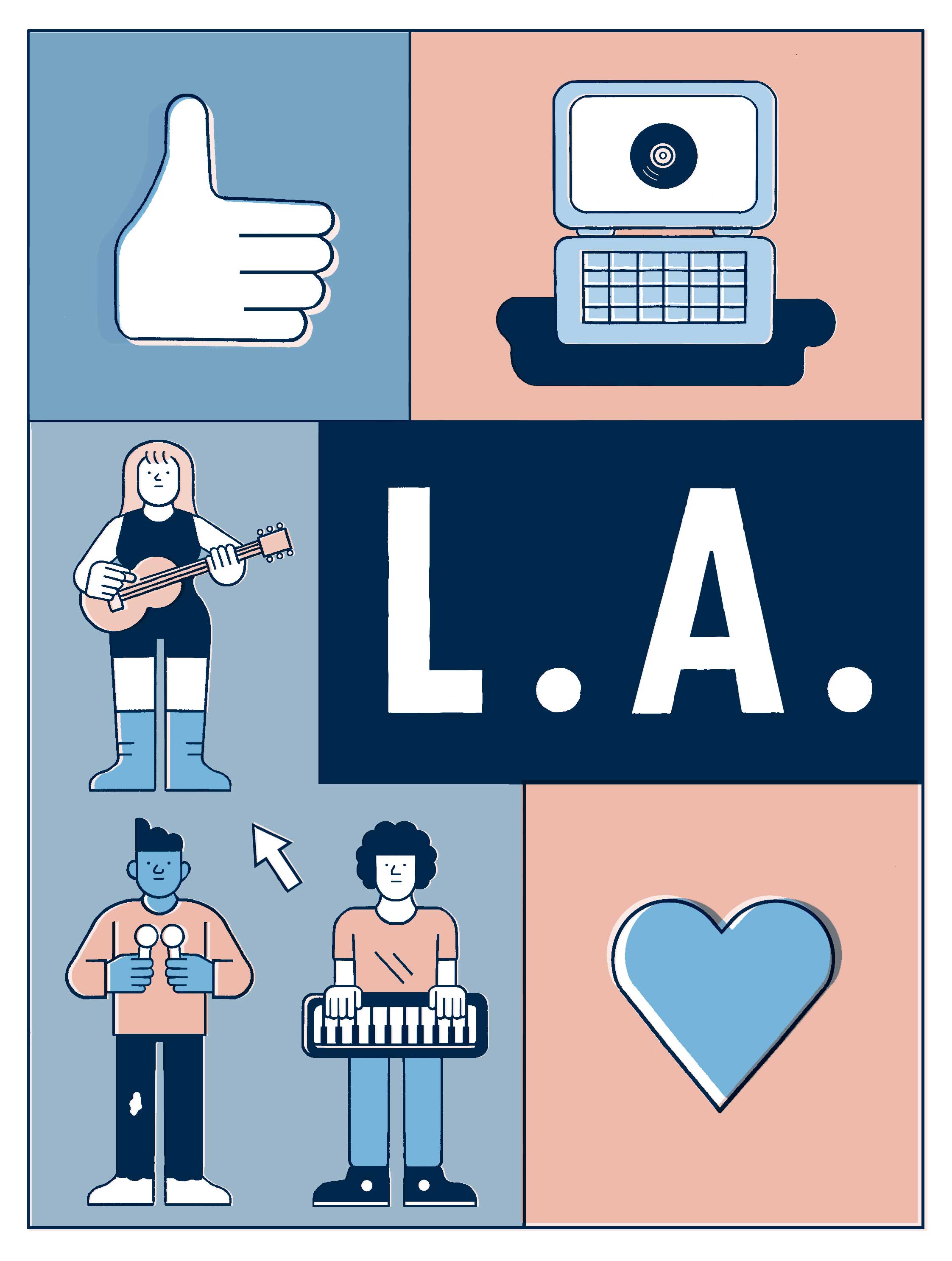 Navigating and ‘Making It’ In the LA Teen Music Scene

The advent of two things seemingly created what we know today as the teen music scene in Los Angeles: social media and recording technology. With the ability to go into your room, lay down a track on Logic or Garageband, and, for free, get to upload it to a platform like Soundcloud is the reason everyone, in some way or another, is a part of the ever-growing music industry. It seems as if the majority of teenagers in this city become involved because it is made incredibly easy to get your image and sound out there. Growing up in LA, it’s not unordinary to be bombarded with Facebook events for your friends’ gigs, Instagram updates about singles and albums being released, links to interviews with up-and-coming bands, etc. The trick, though, is to go through your own routine and advance your own career without falling into the trap of constant comparison, which I always seem to find myself in.

No two success stories are ever alike. Nothing seems to follow a specified or defined track. For example, a band might play one show to a small audience and happen to be discovered that night, as fate has it. In another case, a band gigs for years, their songs grow stronger and their image becomes more defined, which leads them to pooling greater audiences and thus “making it,” in whatever terms you define that as. But the problem here is that with social media’s consistent reminders, everything seems to need to be expedited. There’s no time for process anymore; only the output of a band’s constant new product.

Freshman year of high school when I started playing gigs, I was the only person in my friend group I knew doing it. I quickly found other musicians, whether we were put on the same bill, found each other on the internet, or had mutual friends, which began the formation of the musician community I’ve found a home in today. Soon enough, everyone seemed to be in a band, putting music out there, gigging, or some combination of them all. It was exciting. There was always someone to look up to, to strive to be. But gradually my excitement turned into unavoidable jealousy and self-doubt, as I couldn’t help but compare myself to those doing the same thing as me. I didn’t let myself simply select my own path and live in it.

The music scene itself seems to truly encompass a variety of genres; from punk to jazz, funk to synth-pop, I’ve seen it all. But one thing that is for sure is that bands seem to be more popular than solo artists. If you think about it, a band, made up of 3+ members, pulls a larger audience because there are more musicians to attract people from different circles. Thus, when I play a show, I’m relying solely off of getting my own friends to come see me, which keeps my fan base mainly people I already know.

It’s not as much the feeling of competition that seems to be universal, as I can’t speak on behalf of all LA bands, but more the comparison that seems to plague a lot of us. I can’t help but to mirror myself to another band or artist’s success, making their achievement a sign to tell myself I’m not doing enough. This competition that I’ve persistently felt does seem to play a role in how I view music: I find myself constantly questioning career paths and over thinking the future of my music instead of just living in the moment and making music what it should be, fun and passionate.

If everyone is playing different genres and going about music in their own distinct way, why does there seem to be this unified notion of “making it?” For example, “making it” as a high-schooler in LA potentially looks like booking The Echo, having interest from smaller or potentially major labels, but most importantly, having some sort of following that doesn’t just include your friends. The problem is that often times followings and looks seem to be prioritized above the music itself. There are incredible bands in LA that nobody will ever know about because major sites these days go simply off of social media followings. Though it has become increasingly easier to get yourself out there, as you can orchestrate your career from your bedroom, now more than ever, it doesn’t seem to be as much about the sound and musicality, but rather if the band is fitting some sort of standard we’ve developed for the “teenage” sound.

On the other hand, I couldn’t be more lucky to live in such a thriving epicenter of music. I am faced with a great selection of venues to check out and I’m gifted with all different types of music. One night I could go to Largo to see The Watkins Family Hour perform folk standards, while the next I’m underground at Amplyfi seeing my friend’s newly formed band. The options are endless and for that, I wouldn’t have wanted to grow up anywhere else.

But how I wish everyone could stop seeing music as a competition and more as the art form it is. In the end, music is different for everyone; we choose how to define it. Music can be the thread of a family connection, the cultural combination of generations at a get-together. Music can be the way one copes with emotion, turning loss or fear into some sort of cathartic process to share to an audience. Music can be an escape from the daily grind, the coming together of co-workers or students. So if it’s completely natural that everyone seems to define music differently, why do the unsaid rules of success apply to everyone?