Every once in a while, I find myself in a bit of a music rut. Back in June, it seemed as though no matter how hard I searched, I couldn’t find anything that really knocked my socks off. I was dying to find a new favorite album; the kind that you play over and over again until you absolutely can’t listen to it anymore. Suddenly, the Spotify gods blessed my Discover Weekly with the sweet sweet sounds of French Vanilla.

The LA based four-piece crafts witty, danceable, and massively addictive tunes that yanked me out of my music rut in no time. With vocal acrobatics by frontwoman Sally Spitz, driving guitar riffs, and a freaking punk saxophone (!!) I knew I had finally found what I was looking for. French Vanilla’s second album How Am I Not Myself dropped last June and was produced by Sean Cook, engineer on St. Vincent’s MASSEDUCATION. Its cheeky lyrics challenge societal norms, and explore the challenges and anxieties of navigating sexism and heteronormativity. I sat down with the band at their rehearsal space in LA to chat about their beginnings, the new album, and how they’re really really hot.

So you guys came together during your time in college?

Sally: Right after. Ali and Daniel were living together, they graduated a year before I did and they were writing together a little bit, just fucking around. Once I was out of school I was doing performance art stuff, and Ali had the idea that we should start a band.

Greg: Wait where did you and Daniel jam before?

Ali: In our little living room on Melrose and Normandy.

Ali: Yeah wherever, on the street, in the car.

Daniel: At the beach.

Ali: In the mountains.

Daniel: We were buskers for years actually. We should start telling people that. We all would fight over the same corner. And suddenly we were like why don’t we just combine forces.

Greg: When I was in elementary school, I thought I was going to be a stand-up comedian cause I made people laugh.

Greg: Then I started smoking weed in late middle school and lost any sensibility of being able to speak in front of a crowd, to persuade them into thinking I’m funny.

Ali: Marijuana destroyed your self esteem!

Daniel: Can that be like the headline? “Marijuana destroyed my self-esteem” – Greg Shilton from French Vanilla.

Greg: I went to music shows a lot in high school, my goal was to play at The Smell. I started to go to there when I was 15, seeing Abe Vigoda and Mika Miko, being like this is the coolest thing ever.

Ali: I had never played an instrument before, I certainly didn’t think this would be a career, which it isn’t at this point either, just to be clear [laughs]. We had zero expectations.

Sally: I didn’t know about much alternative music until I was in my early 20s. Once I found out about The Smashing Pumpkins and Nirvana and later on more performance-based singers like Kate Bush or Nina Hagen, I realized I could make that a creative outlet of value.

How has your performance art informed you as a performer?

Sally: I took classes with Simone Forti, she’s a movement pioneer who came up in the 70s in New York with Yvonne Rainer. That was really significant for me because I learned how to loosen up in a really extreme way. Moving without structure and without expectation… an inner judgement-free kind of environment. That helped me learn about how to move in front of people in a free way which is a huge hurdle for a lot of performers.

You started off playing at parties and DIY spaces, many of which have been shut down. How has that affected you as a band and what have been the effects on the community?

Greg: I think if you know people you’re going to be able to get a show, whereas with DIY it’s much more open. Allowing people to express their music and themselves without this expectation of bringing a crowd, drawing money and bar sales, which influenced the music to be more creative.

Ali: I think there’s still a thriving DIY scene in LA. There are new venues popping up all the time, it’s like a whack-a-mole situation. One venue gets shut down and three more pop up, you know? A few years ago we would know all the people that were running main DIY venues and at this point we don’t know who those people are as much. But that incubator of a DIY scene is so crucial, we definitely wouldn’t be where we are today without that support. I think it is still functioning in LA, that exists.

You just released your second full-length album, how did you come up with the name?

Ali: Our second album is called How Am I Not Myself? It was actually the first time Greg practiced with us I think? I had a job interview the next day. Job interviews make me extremely nervous. Just the charade of having to talk about yourself and prove to the person in this weird stilted environment that you are the right person and you’re so great… I hate it. I was saying how people always give you advice like “Just be yourself!” And I’m like being myself isn’t working. I was imagining them asking me “So tell me a little bit about yourself?” and me just like having a complete breakdown like “How am I not myself??”

Sally: The theme of the charade and performance come up a lot for us.

Daniel: Especially performing your own identity. 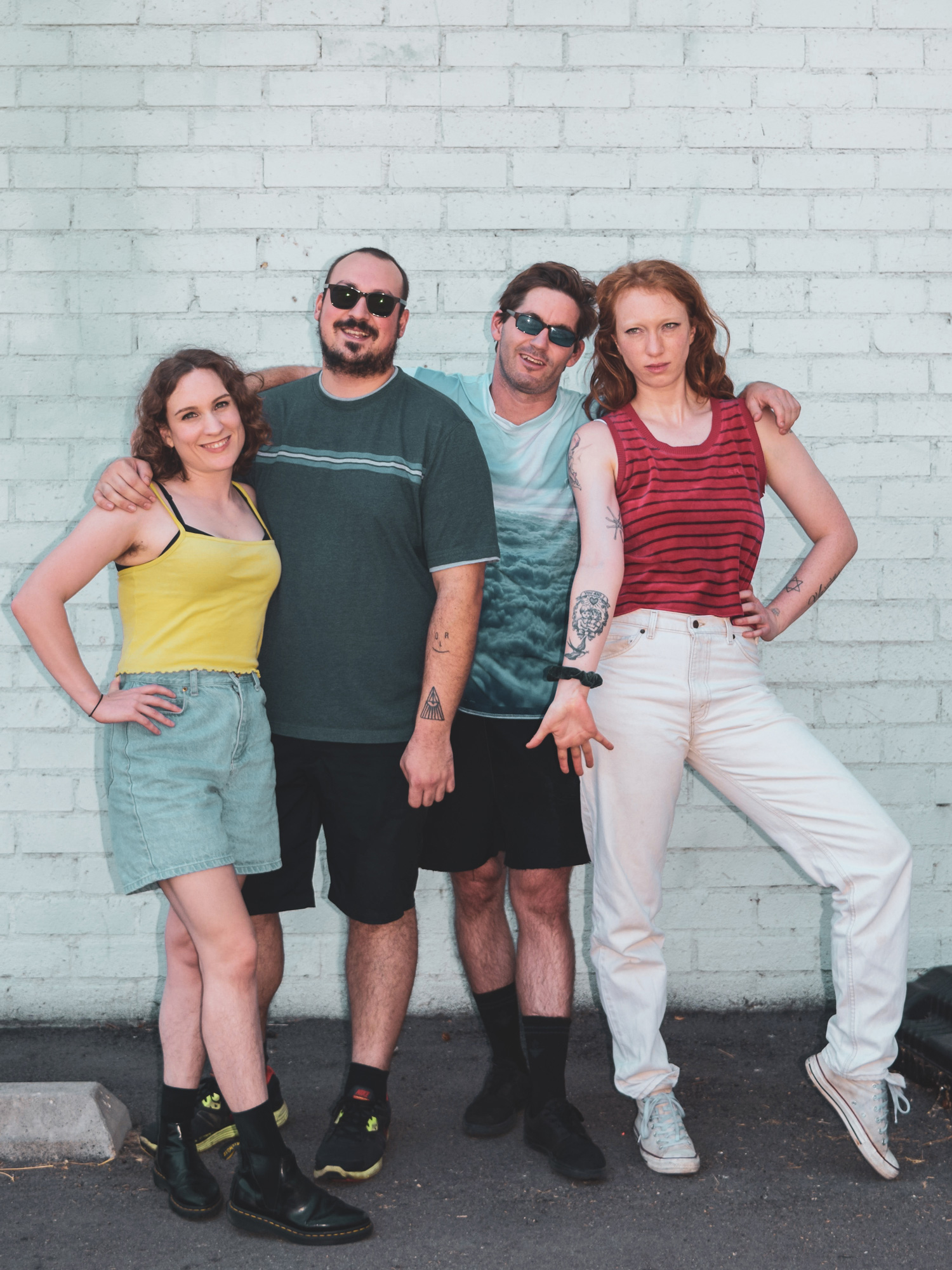 Where did you draw your inspiration for the album?

Sally: Daniel gave me a book where Dracula’s secretary is reincarnated in this polyamorous woman’s body. It’s called The Letters of Mina Harker by Dodie Bellamy. I really like her style of writing and the way that she thinks. That was formative for the way that I wanted to write the poems or prose that would turn into songs. I was also listening to Avital Ronell, her book about complaining and the way that women speak and are perceived. Their ideas were what I was thinking about a lot when we were writing.

Ali: I think also some of the main singles were about Sally’s experience coming out of a relationship and into a new one?

Sally: Right, I also was coming out of a long-term relationship with a man and then realized that I also really loved a woman and that I wanted to be with her. We toured with her band “Shopping” and it was this big life change that I was also experiencing.

Do you guys have a favorite track from the album?

Sally: Between “Real or Not” and “Friendly Fire” it’s hard for me. “Real or Not” I feel is one of the prettiest songs that we’ve made, and “Friendly Fire” has this balance of being pretty but with this aggression that feels important. It’s very driving and gets to a place that I search for when I listen to songs which is like a feeling of exultation and energy. It’s satisfying in this physical way.

Your music and demeanor onstage and the music videos and everything has a kind of unapologetic attitude like “This is who we are, deal with it.” Do you feel like that when you’re onstage?

Greg: Totally not. Only because I’m a nervous person, so I feel bad being onstage sometimes. I’m like oh I don’t belong here. So I wish I had that, but I love that it reads that way because then I can start telling myself I do belong here!

Fake it till you make it! Imposter syndrome is so real.

Daniel: I think performing is really exhausting, and trying to maintain the right vibe for whatever people want–I’m just not going to do that because we don’t have the energy. We have a very specific dynamic between the four of us that people aren’t necessarily in on. I think we maintain that offstage to onstage.

Ali: That’s a huge thing in our regular life too [laughs].

Sally: It’s very dry and kind of deadpan and sarcastic so I think people don’t always know how to read that without knowing us.

Daniel: I think we respond best to a crowd that’s on the verge of heckling. Like when that dynamic happens. There’s usually a moment between  the second and third song where you know whether it’s gonna be fun or it’s gonna be like a literal nightmare. 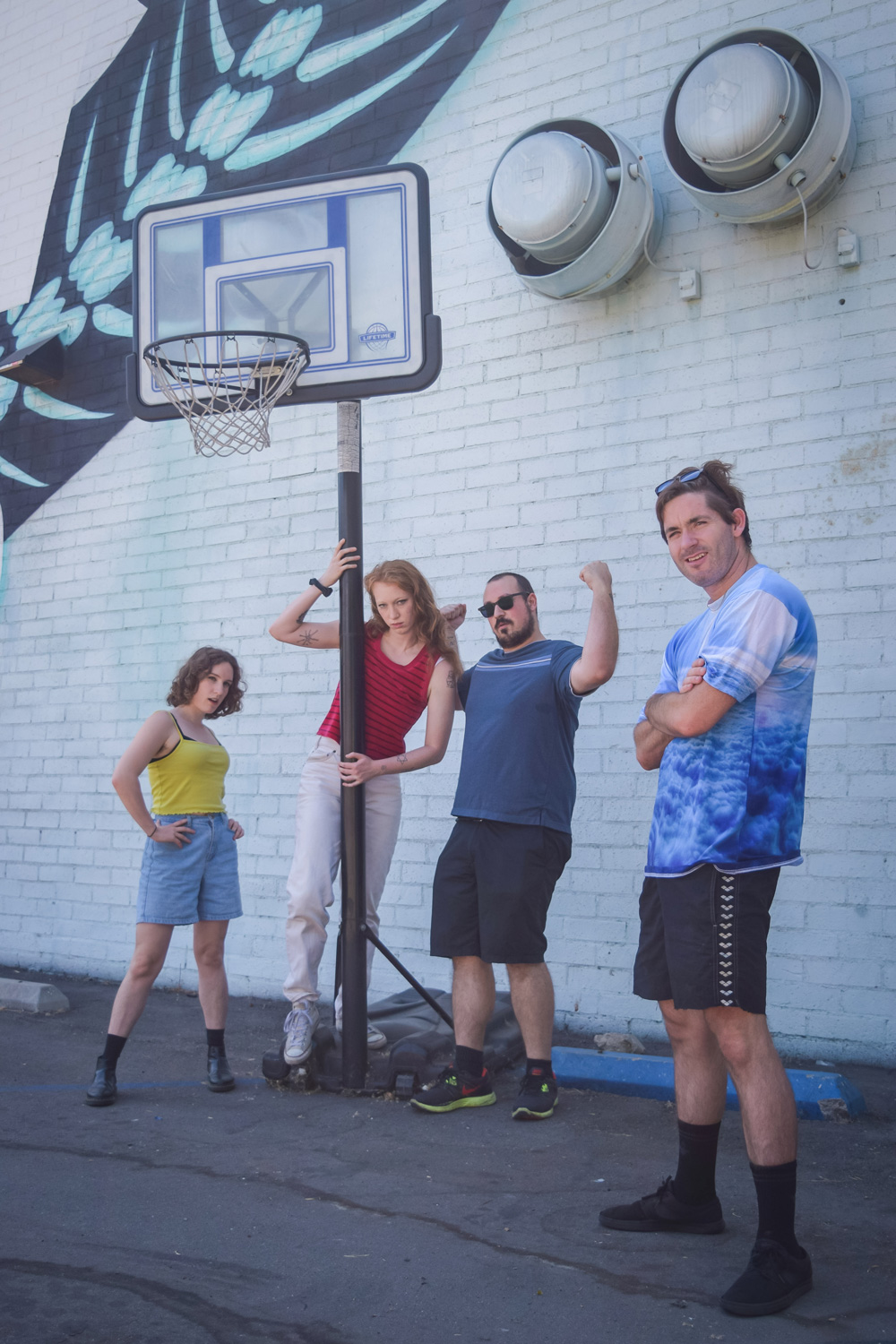 What’s up next now that you’ve released your second album?

Sally: We have a festival coming up. Moonstone Festival in Birmingham, Alabama November 16th I think.

Greg: We’re probably going to have a tour coming up sort of soon, in the winter. And then trying to tour the album a bit more and hopefully do some writing in the process.

Daniel: I have to find a job, if you know of any jobs. Or if anyone who’s reading this does.

Sally: I think the morgue was hiring someone too? But I don’t know if you’re qualified.

Ali: Yeah actually what are they called? Undertakers? I heard they make bank.

I heard you don’t need a license–I listened to a podcast and some people have morgue situations in their basement that are super unofficial, it sounds crazy.

Ali: No! That’s gotta be illegal.

Anything else you guys want to mention?

Daniel: Just try to make sure you let the audience know that we’re like really hot. The hardest part of touring is all of the fans wanting….

Daniel: Yeah, sex. From us.

Greg: It’s hard to get them off of us. The hardest part about touring is how hard…

Ali: All the fans are.